Singer, 38, who claims she married ghost of Victorian soldier complains he RUINED their Welsh honeymoon by drinking too much and trying to get frisky on the beach

A woman who married a ghost has slammed her husband for ‘ruining’ their honeymoon on Barry Island, in Wales together.

Singer Brocarde, 38, accused her non-corporeal beau of never picking up the tab – because he ‘obviously doesn’t have a bank card’ – and trying to get frisky on the beach with her.

The performer from Oxfordshire, who insists she’s in love with the ghost of a Victorian soldier named Ewardo, also accused him of drinking too much alcohol.

She told the Daily Star: ‘Edwardo thought he was being passionate and romantic by wrestling me to the ground to frolic in the sand, but I was trying to share my ice cream with him and it went everywhere, all over my face, in my hair and the of course the sand stuck to it so I looked like I’d had a fight with a giant seagull.’ 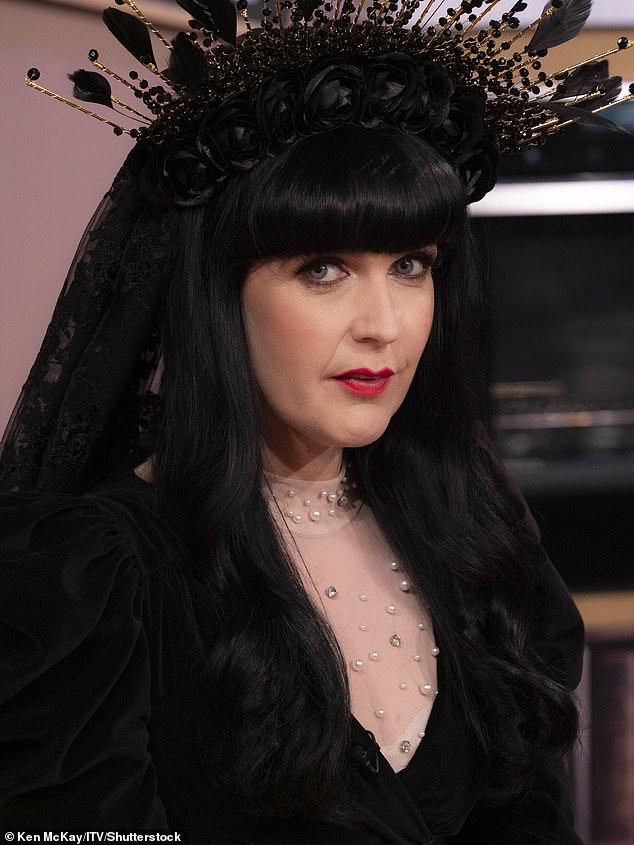 A woman who married a ghost (pictured in October) has slammed her husband for ruining their honeymoon on Barry Island, in Wales together

Brocarde admitted the honeymoon should have been ‘amazing’, but was instead ‘ruined’ by her unpredictable lover who hit the mini bar hard.

‘Liquor bottles are always mysteriously left empty, aside from the gin bottle, they are always left standing, he’s obviously not that partial to that spirit,’ she claimed.

The newlywed also revealed that Edwardo ‘suggested ordering 12 bottles of the best champagne to the room’ when they made it to the hotel, knowing full well that the bill would fall on her.

Last week, she shared a video of the pair exchanging their vows on Instagram. 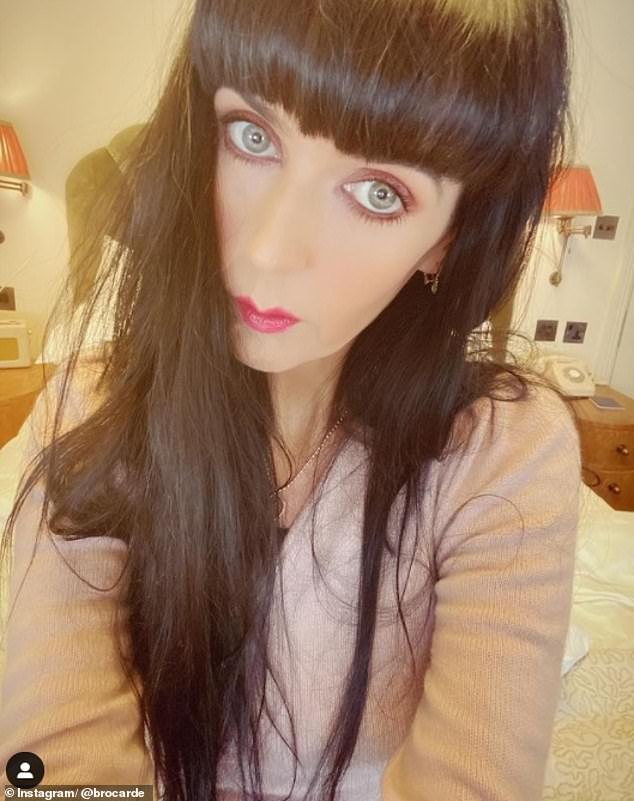 Brocarde (pictured in 2021) admitted the honeymoon should have been ‘amazing’, but was instead ‘ruined’ by her unpredictable lover

Brocarde can be heard saying ‘I do’ in the clip, and answering ‘he does’ for her groom, during the touching ceremony.

While it’s not quite clear what Edwardo chose to wear for his big day, Brocarde opted for a gothic black dress and veil, with the venue adorned with a series of romantic candles.

It comes as, in October, Brocarde left This Morning viewers in hysterics after she claimed her ghost lover appeared on set with her.

Halfway through her interview with Phillip Schofield and Holly Willoughby, Brocarde shrieked and revealed Edwardo was ‘here,’ on set with her. 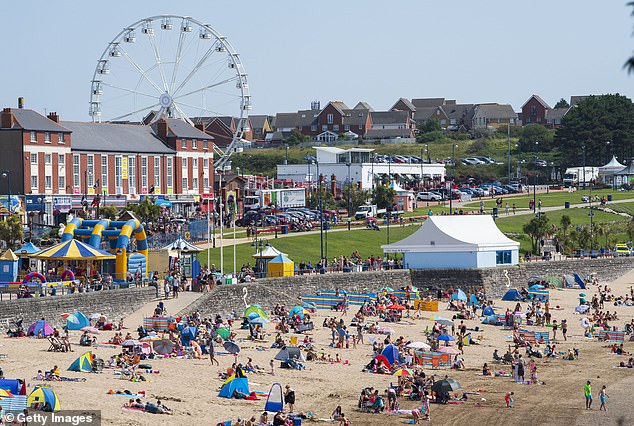 The performer from Oxfordshire, who insists she’s in love with the ghost of a Victorian soldier named Ewardo, also accused him of drinking too much alcohol on their Welsh getaway. Barry Island pictured in July 2020

She added that the spirit, who once ‘ghosted’ her for a week, was not pleased with her talking about him on TV, and that he doesn’t like Phillip Schofield.

Viewers and the show’s presenters, including Alison Hammond, who was heard cackling in the background during Brocarde’s segment, were amused by the spiritual singer’s unconventional love story.

Dressed in a black wedding dress, Brocarde, who claims she met Edwardo during a thunderstorm as she struggled to sleep following a disagreement with a friend, said she was looking forward to her nuptials.

As she began her interview, she shrieked suddenly, causing Holly Willoughby, who was dressed as Wednesday Adams, to jump. 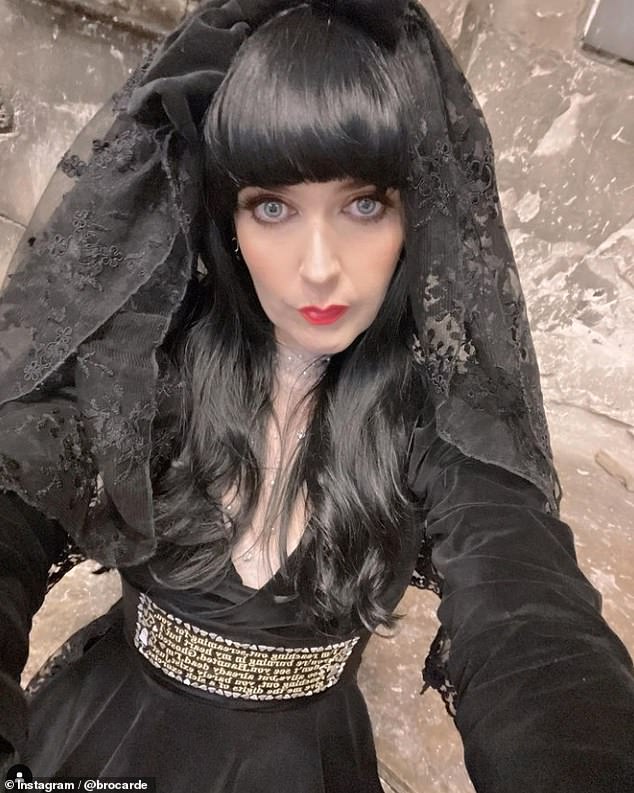 She was seen holding the bridal crown that tied her black veil to her head and claimed Edwardo had hit it.

Immediately, Phil, who was dressed as Uncle Fester, began to move around the couch, and pointed out he ‘couldn’t see him’.

Brocarde then told Phil that Edwardo ‘doesn’t like you,’ to which the presenter replied: ‘Well, that’s fair enough, I’m not marrying him.’ 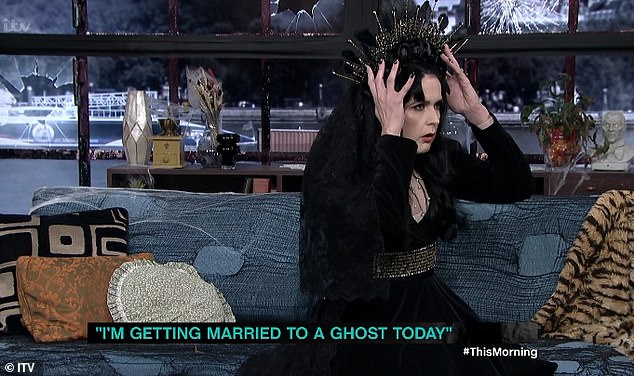 It comes as, in October, Brocarde left This Morning viewers in hysterics after she claimed her ghost lover appeared on set with her

‘Sorry, he can be rude sometimes,’ Brocarde apologised.

Resuming the wedding talk, she admitted she found it difficult to find a church that would marry them.

‘Because I think there is a bit of an issue with religion and the after life. Not all priests believe…’

As she spoke, ‘Edwardo’ knocked her headpiece once again, and the singer accused him of ‘ruining her wedding day by making her  look like an idiot on TV’.

‘Well, the last time you came and talked about him on the show, he ghosted you for a week,’ Phil said, with Brocarde agreeing: ‘He did ghost me for a week.’ 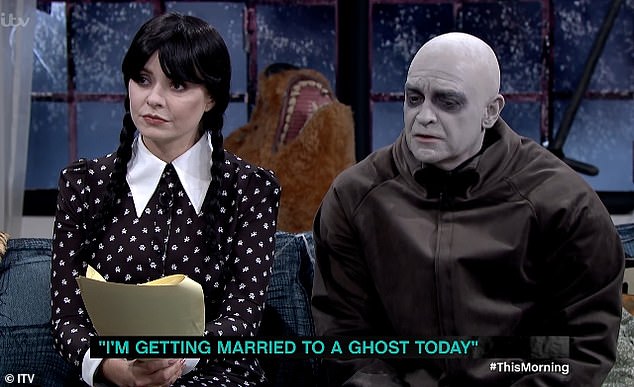 This declaration caused Alison Hammond and Josie Gibson, who were waiting for the next segment dressed as Morticia Addams and Lurch, to cackle in the background.

‘Maybe he doesn’t approve of being spoken about,’ Brocarde continued.

Phil was determined to get the spirit to perform a trick for him and asked: ‘Edwardo, I wonder whether there is any way you could make my script move or… something.

‘Is there anything you could do, Edwardo? Can you flicker candles for Brocarde,’ he asked.

The then wife-to-be said she hoped Edwardo would still be standing at the altar after her appearance on This Morning, to which Phil deadpanned: ‘How will you know?’

She replied: ‘Well I will feel his presence.’

Brocarde revealed she didn’t believe in ghosts before she ‘met’ Edwardo, but was turned around by the spirit.

‘I had tears streaming down my face. It was really intense, and I think it was the fact that it was so intense that converted me.’

If you enjoyed this story…

‘She’s going to be single forever after this!’ This Morning viewers ridicule woman claiming she’s in love with a ghost – and that their ‘relationship’ is ‘very emotionally driven’

‘I saw an old lady with glasses’: Constance Wu reveals she believes in ghosts and details her own chilling spirit encounters as she reflects on starring in 2:22 A Ghost Story