Single ‘superdad’ who adopted five disabled children says his ‘heart is completely broken’ after revealing the sudden death of his youngest son, two

A single father of five adopted disabled children has spoken of his ‘complete heartbreak’ after his youngest son died aged two.

Breaking the tragic news, Ben Carpenter, 35, from Huddersfield, West Yorkshire, said that Noah had died ‘suddenly’ and he had been left ‘numb’ with grief.

The former special needs worker, dubbed a ‘superdad’ by friends and family, told the Huddersfield Examiner: ‘At 3.30 my beautiful baby boy passed away. Words cannot describe how numb I am feeling right now.’

Ben, who is also father to Jack, Ruby, Lily and Joseph – aged between three and 11 – all of whom have disabilities, posted a photo of his son on Twitter along with an emotional message, saying: ‘My heart is completely broken. fly high my beautiful boy!

‘You brought so much joy to our life’s, in fact everyones life’s. I love you with all my heart my boy. Untill we meet again Daddy.’ 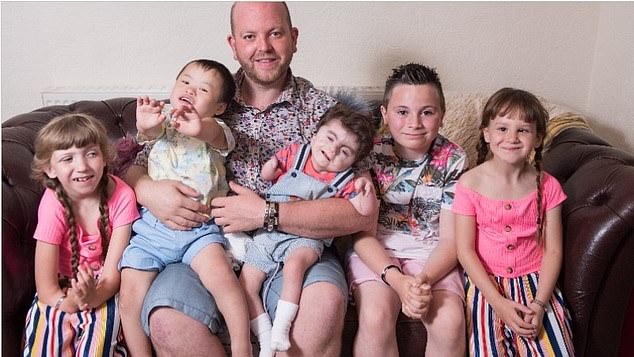 Ben Carpenter, from Huddersfield West Yorkshire, has revealed his heartbreak at the loss of his two-year-old son Noah (pictured fourth from left), who was born with a rare syndrome that affected his arms and legs. Pictured: Ben with Noah and his other children – aged between three and 11 – earlier this year (from left: Ruby, Joseph, Noah, Jack, and Lily) 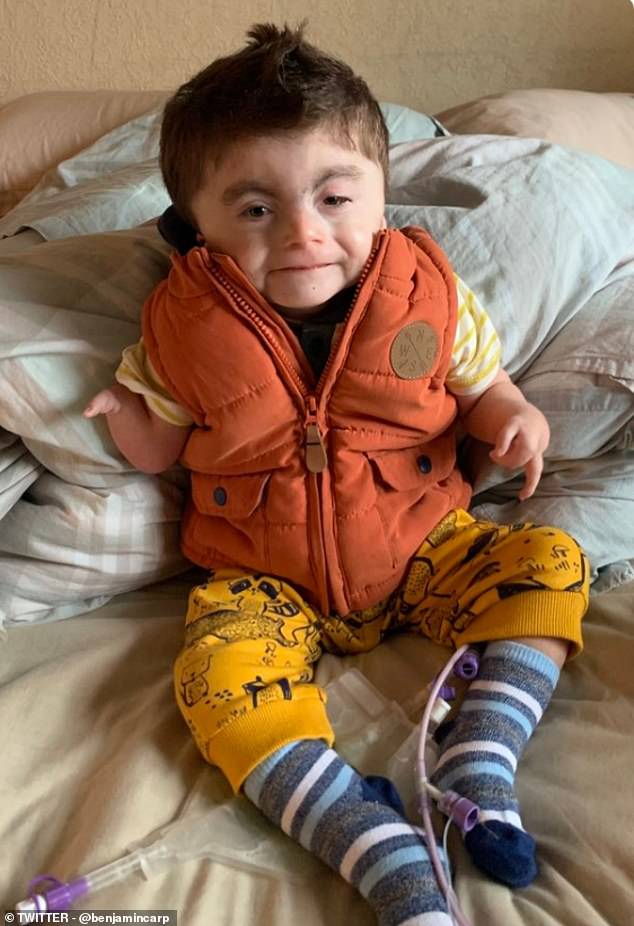 The single dad posted this photo of his son on Twitter, writing: ‘My heart is completely broken. fly high my beautiful boy! ‘You brought so much joy to our life’s, in fact everyones life’s. I love you with all my heart my boy. Untill we meet again Daddy.’ 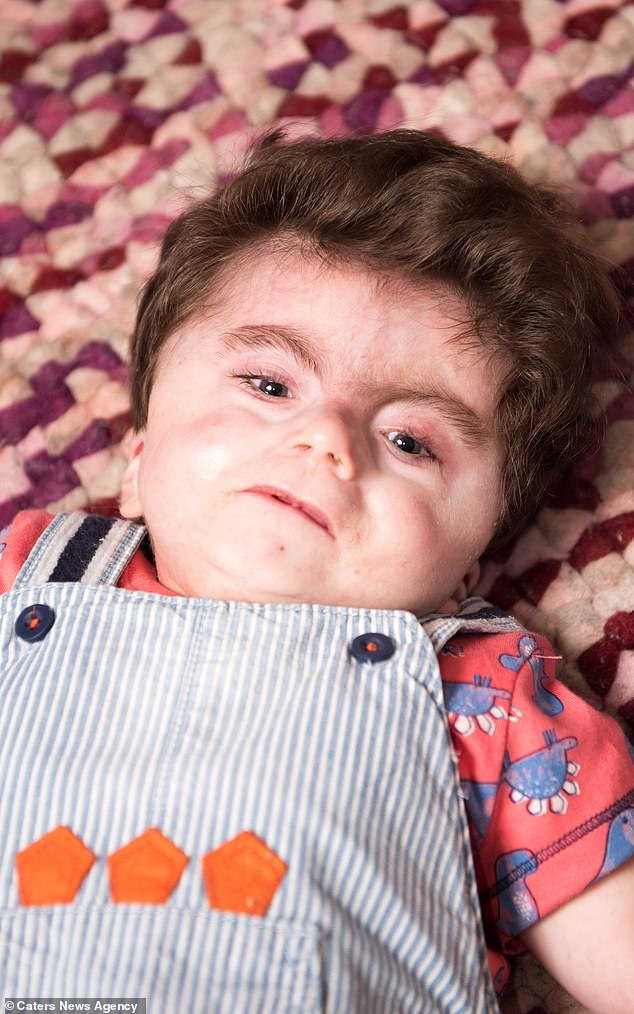 Mr Carpenter became a dad-of-five after adopting Noah at 15-months-old in 2018. Noah was born with Cornelia de Lange syndrome, which can limit life expectancy and cause heart defects 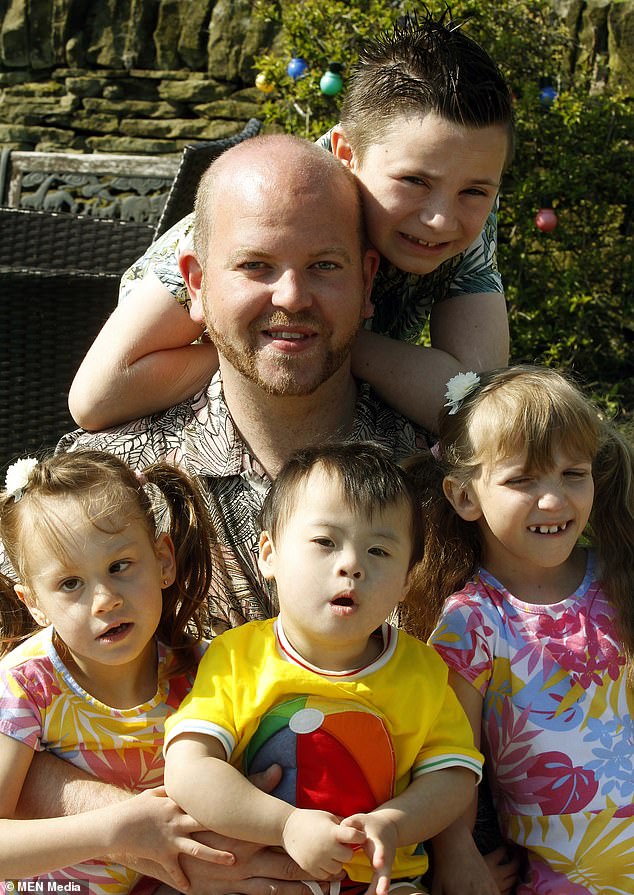 Single father Ben pictured in 2018 with his other children – aged between three and 11 – all of whom are disabled  (clockwise from top: Jack, Ruby, Lily and Joseph). He is currently in the process of adopting a sixth child

He told the Huddersfield Examiner that Noah was the ‘most placid child I have ever cared for’ and described his death as ‘sudden and unexpected’.

The full-time single parent, who was believed to be the youngest gay adopter in the UK when he became a dad at 21, adopted baby Noah at 15 months, after seeing him in a magazine about adoption and deciding to go through the process for a fifth time.

Ben is currently in the process of adopting a sixth child, a disabled baby boy.

Noah was born with Cornelia de Lange syndrome which causes birth defects affecting the use of limbs.

When he adopted Noah, Ben, a former special needs worker, told the Mirror: ‘I could see he had profound disabilities and I instantly fell in love.’

Cornelia de Lange syndrome can shorten life expectancy due to cardiovascular problems, with other symptoms including intellectual disability, delays in normal growth and deafness. 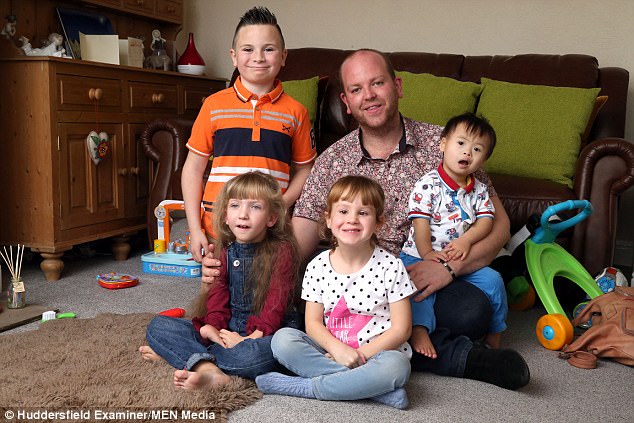 Ben Carpenter, pictured with his four adopted children before he welcomed Noah into the family in 2018

WHAT IS CORNELIA DE LANGE SYNDROME?

Cornelia de Lange syndrome is a developmental disorder that slows growth before and after birth.

Those with the life-limiting condition have shorter stature; intellectual disability and abnormalities of bones in the upper limbs, hands and fingers.

The rare syndrome can shorten life expectancy due to cardiovascular problems, with other symptoms including deafness and behaviour problems.

The news of Noah’s death was greeted with a flood of sympathy on social media.

Ben lives in Huddersfield with his mother, Rita, and has a robust support network to help him care for his children, including the children’s godmother Michelle Jackson and close friend Jeanette Bottomley.

After spending years struggling to adopt as a single, gay man, Ben became father to his eldest son Jack, who has autism and obsessive compulsive disorder (OCD), eleven years ago.

Since then, the doting dad has spent thousands of hours caring for his severely disabled children.

Daughter Ruby has a condition called Pierre Robin syndrome, which affects the head and face as well as problems with movement in her arms. 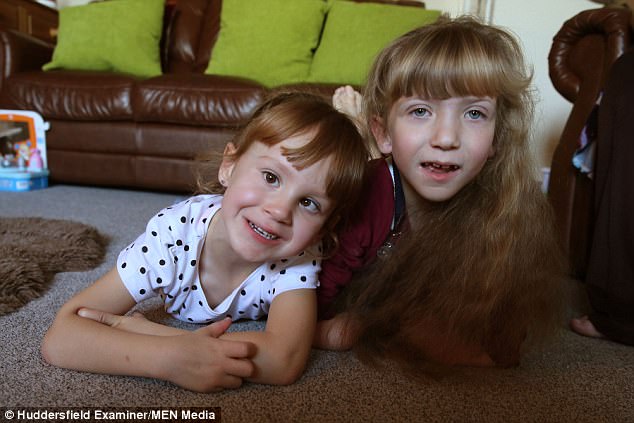 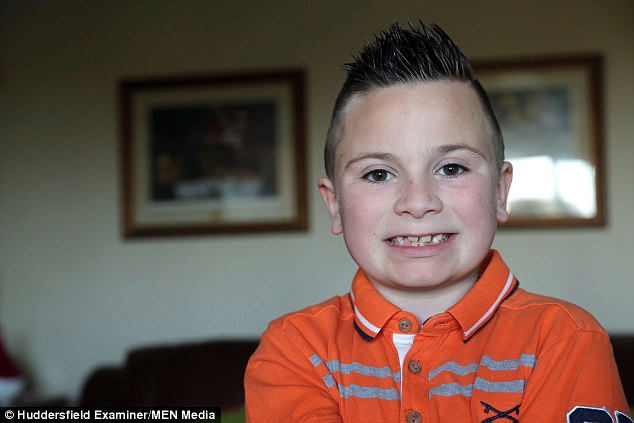 Biological half-sister to Ruby is Lily, who is deaf, and there’s also Joseph, who needs a colostomy bag and has Down’s syndrome.

Ben told the Mirror earlier this year that although parenthood in his house can be ‘trying’ at times, he loves being a father: ‘It has its moments, I can’t sugarcoat that, we have some really trying times.

‘I have five children all with really complex needs, there is a lot of appointments up and down the country which can be quite draining.’

He adds: ‘People say it is hard work but I love every bit of what I do.’

Ben explained that going into nursery homes in his youth inspired him, adding: ‘The love and support has grown with me and my love has grown with the family.’

The single father was previously named Adopter Champion of the Year after he adopted four disabled children since 2010.

In June, speaking to Femail, Ben said the attention in the media was lovely but that he hopes his story will inspire others to adopt.

Mr Carpenter says: ‘People have called me a saint and say what I do is remarkable but I just wanted to be a dad and adopting is my way of becoming a dad.

‘I only ever wanted one child when I started on the process of adoption. I am a believer in fate – this is what I was meant to do.’ 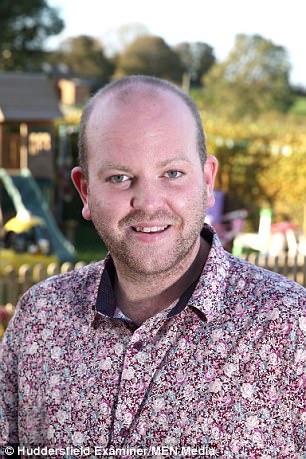 Mr Carpenter, pictured, is a previous adopter champion of the year as a result of his dedication to his growing family

Mr Carpenter’s adoption journey began more than 10 years ago when he became one of youngest gay men in the country to adopt a child.

It had taken him around three years to convince the authorities that he was serious about adopting and, more importantly, had the maturity and skills to be a good dad.

The children have made significant progress since being adopted and have surprised social workers and medical professionals alike.

Mr Carpenter said: ‘I get called a saint all the time and “how do you do it?”

‘My mum Rita is a huge support to me and my friend Jeanette is an amazing woman and help to me.

‘The charity Adoption UK has also been lovely and deserves praise for the work they do and support they provide.’

He remains single to this day and doesn’t see it as an issue.

Mr Carpenter said: ‘I have never sought a relationship, it never interested me.

‘I like to do my own thing. At the end of the day I like a cup of tea and a slice of cake and to not listen to someone snoring!’

When he’s not looking after the children – which is pretty much 24/7 – Mr Carpenter works to educate other prospective adopters and sits on a local adoption panel.

He said: ‘I celebrate and promote adoption. It’s the most rewarding, satisfying and challenging thing I have done.

‘I am not going to sugar-coat it because it’s not for the faint-hearted.

You have to be 100% committed. If you are considering adopting, make sure you have childcare experience. If you are not already a parent make sure that it’s right for you.

‘I have always said that adopting a disabled child isn’t right for everyone. You have to be totally honest with yourself.’

His driving motivation, he said, is seeing his children learning new skills and growing in confidence.

When he first met Ruby she was hooked up to a feeding machine, couldn’t speak and was reliant on a wheelchair. 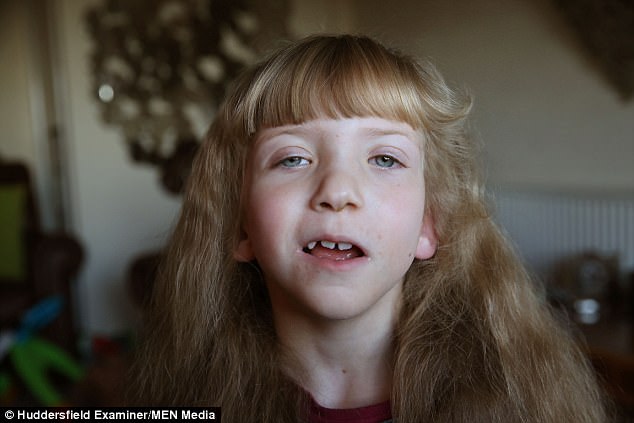 Mr Carpenter said when he first met his daughter Ruby, pictured, she was hooked up to a feeding machine but has made tremendous progress

‘She was petrified and shaking and it broke my heart. She is eating and walking now, although she has life-long needs.

‘I am quite proud of myself that I have turned her life around. Seeing the changes in her is just outstanding.

‘Seeing my children and how they are now is why I get up in the morning.

‘In this house we have an “I can do” attitude and we try to teach them as much independence as we can. Disability isn’t the be all and end all.’