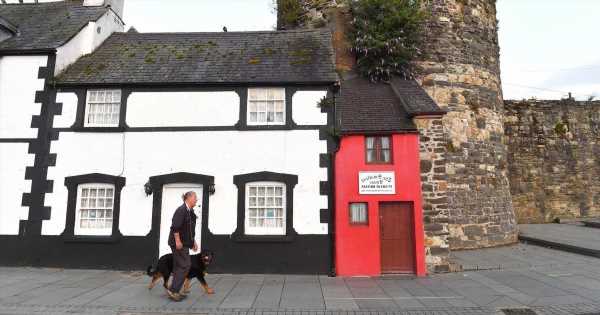 The smallest house in Britain, as recognised by the Guinness Book of World Records, has had a minuscule sofa installed in the cupboard-sized lounge.

The tiny property in Conwy, North Wales features just two rooms – one upstairs and one down.

Jan Tyley, the owner, runs the home as a tourist attraction for half of each year although this was affected by the coronavirus pandemic in 2021.

She told the Mirror : “The house has been in my family for five generations.

“My great great grandfather bought it in 1891 as a letting property. But nine years later the council told him it was too small to be a house and they wanted to pull it down.

“Luckily, he was good friends with the editor of the local newspaper, who started a campaign to find out if it was the smallest house in the country.”

After measuring mini homes up and down Great Britain it was found that the Conwy house was indeed the smallest to exist in the country and so it was spared demolition.

But, it was determined that the property was too small to be a residential home and so has been used as an attraction for visitors since 1990.

The home stands at just 122” tall and 72” wide and has been considered the smallest house in Britain for 100 years.

And, it still looks just as it did a century ago with a tiny iron bed and a basin instead of a loo.

Jan had never tried to furnish the property as she believed nothing would fit, but sofa-in-a-box company Snug recently got in touch.

They claimed to be able to make and install a couch in the tiny home with no trouble.

Jan said: “I wanted to be there when they tried to fit the sofa – I wasn’t going to miss that.”

Scores of curious onlookers watched the delivery men try and get the sofa into the tiny house, but were surprised when it only took a few minutes.

While Jan was impressed with the new addition to the house, sadly it was only temporary.

She said: “We have upwards of 50,000 people visiting every year and it’s hard enough for them to move around as it is.”

You can also read more lifestyle stories by signing up to our Hot Topics newsletter here.