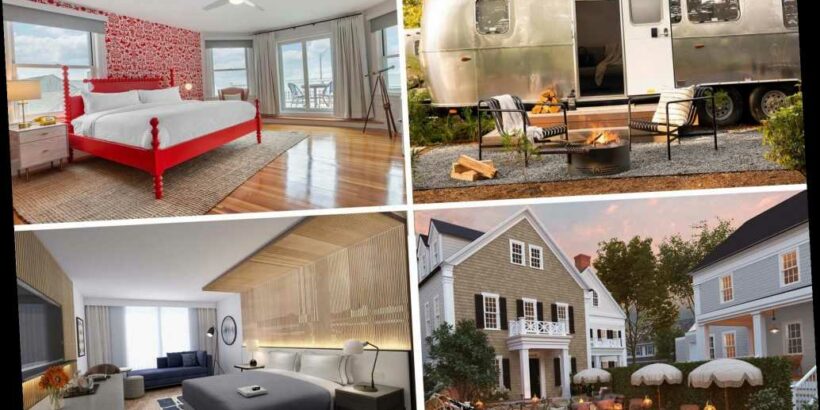 It’s time to hit the road and check out everything you missed during lockdown — turns out it there was a lot.

A reimagined 1920s Boston classic; a retro-chic Airstream campsite on Cape Cod; a Nantucket Bohemian boutique inn; a Rhode Island coastal chic Victorian; and a lo-fi luxe hotel in Maine are just a handful of the stylish new lodgings that open in New England this spring.

Start by heading for Boston’s Back Bay.

Opposite the utterly pretty Public Garden, Highgate’s The Newbury Boston, set in the neo-classical building opened in 1927 as a Ritz-Carlton, is emerging from a gut renovation May 1.

The new main entrance on chic Newbury Street leads to a greatly reimagined interior that includes the private Library lounge for hotel guests. The 286 guest rooms includes a whopping 90 suites and two presidential suites, each done over with a sleek blue-gray-cream palette, and with tweedy herringbone juxtaposed with plush velvet. (Tip: Book a room overlooking the historic Public Garden.)

Previously seasonal and only open for special events, The Rooftop is now an indoor-outdoor, year-round restaurant, operated by New York-based Major Food Group (Carbone, Dirty French), and styled as a grand trattoria, but with a posh, dress-up vibe. Three beloved traditions remain: take afternoon tea in the revamped upstairs Newbury Salon; enjoy drinks in the re-styled Street Bar opposite the Public Garden; and dogs are welcome.

Glamping tents and Airstream “suites” with are now available year round. Each family-sized airstream boasts a TV,  A/C, heat, and decidedly non camping like bathrooms stocked with Vermont’s fabulous Ursa Major toiletries. The seasonal tents (bookable April through October) don’t stint on comfort either: there’s electricity, including heat, mini-fridges, and sofa-beds. Don’t worry Tenters, the round-the-clock communal bathrooms located in the Clubhouse are upscale. All accommodations include a private fire pit. (Tip: Vista Airstreams have the best ocean views.)

The Mid-Century Mod styled Clubhouse’s lounge includes an indoor fire pit, and a shop stocked with everything from s’mores kits to beer. Best of all, it’s pet friendly.

Hoist the “Maine” sail because Canopy Portland Waterfront, part of the Canopy by Hilton collection and a sister to the uber-hip Press Hotel, opens Memorial Day weekend.

Located in charming cobblestone lined Old Port, the newly built six-story building echoes the area’s working warehouse past with exposed brick and beam, and a steely palette of gray and military blue.

The 135 guest rooms and suites have a similar handsome, gray-to-deep blue approach to color. The signature Canopy natural wood wraparound head board is an abstract take on canopied beds. (Tip: Go all out with a waterfront suite.)

From $299 per night. Pet fee: $30 per night (donated to the Greater Portland Animal Refuge League).

Narragansett isn’t just for lovers of cheap beer. Sophisticated sots will want to settle at The Shore House on Rhode Island’s southern coast. The hotel marks a new era for the former Ocean Rose Inn — one where beach chic meets boutique bright.

Dating to 1901, this former private residence became an inn with a speakeasy during Prohibition in the Roaring Twenties, before quieting down as a picturesque seaside spot.

This latest incarnation, which opens May 1. brings the 31 guest rooms and suites up-to-date with a fresh look of brilliant white and pale woods. Restored antique furniture adds character. Every room has an ocean view and individual eye-catching papered accent walls: from impressionistic flowers to swooping swallows, a bird that nests and feeds in the area during spring and summer. Bathrooms are decidedly un-Victorian with new glass-walled rainfall showers. Besides the main inn, four guest rooms are located in an adjacent cedar shingle cottage.

The hotel’s new seafood restaurant, Beach Craft, won’t open until May 24. But wait around because it boasts a raw bar with splashy beachside views. Dogs are not allowed.

Limerick writers will find inspiration on India Street, a balmy stroll from Nantucket’s harbor side historic district. There lies the new Faraway Nantucket, which will open Memorial Day weekend after a top-to-toe renovation of a building dating to the 1800s. It’s the second island property for developer-owners, Boston-based Blue Flag Partners.

The boutique styled interior pairs silver and slate, brocade and brick, raw wood and rattan, and veritably purrs Bohemia meets Biba. The 62 rooms and suites are dominated by big comfy beds and a gray on white palette. Some have original fireplaces and one has a wildly opulent quad bunkbed surrounded by bird of paradise wallpaper.

Sister Ship, the hotel’s 140-seat indoor-outdoor restaurant, is flanked by a rattan high-stool lined bar and comfy sofa strewn lounge, and a shrubbery shaded patio. Expect coastal fare, detailed cocktails, and an extensive wine list. Bicycles are available for guests to borrow; dogs are welcome at no charge.