The soft side of the iron lady: Privately Left-leaning, Caroline Slocock was a civil servant who couldn’t stand Margaret Thatcher. Then she went to work for her — and was completely won over by her motherly kindness

BOOK OF THE WEEK

There were only two women sitting at the crammed Cabinet table at 9am on November 22, 1990: Margaret Thatcher and, at the very far end, her private secretary for home affairs, Caroline Slocock — the first female private secretary at No 10.

Many of the men in that heavily male room have since described the moment in their memoirs. Here, for the first and only time, we have an attendant woman’s perspective on that fateful morning. Listening to Margaret Thatcher giving her resignation speech was, Caroline Slocock writes, ‘absolute torture’.

Every Thursday morning for 11 years Thatcher had led Cabinet meetings round that table, ‘and normally she would be in total control’. 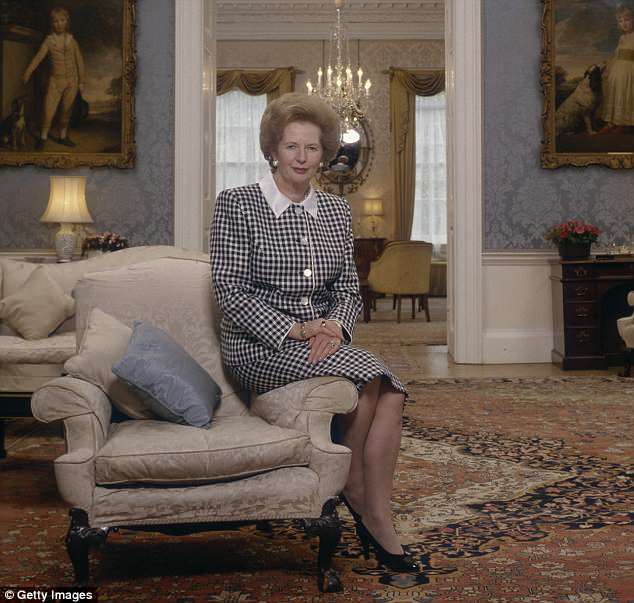 The first female private secretary at No 10 Caroline Slocock, reveals her experience of working alongside Margaret Thatcher (pictured) in a new memoir

But today, ‘her voice breaks down and she starts to sob.’ Cecil Parkinson offered to read out the speech for her. ‘But that isn’t going to happen, oh no,’ Caroline Slocock writes, in the diary-style present tense. ‘They are going to hear how she feels, they are going to feel the hurt they have inflicted on her.’

‘It is the raw hurt, anger and shock in her voice that really registers with me,’ Slocock recalls. ‘That, and her loss of dignity, and the sorrow felt by everyone in the room.’ What Slocock didn’t see coming was that she herself would start to cry — not just a few tears running down her cheeks, but heaving sobs, which she failed to stifle as she left the room.

As an impartial civil servant, Caroline Slocock was not supposed to feel, let alone show, emotion. Privately Left-leaning, she was certain Thatcher was ‘finished’ — this had become clear during Geoffrey Howe’s ‘lacerating and forensic assault’ on her in his resignation speech, which triggered the leadership contest in which she failed to win enough votes to avoid a second ballot.

But sometimes, human emotions break free from reason and refuse to be kept in check. Slocock was not alone in her involuntary sobbing that day. By the end of the day, she noticed, there was no lavatory paper left in the normally well-stocked ladies’ loo.

There had been a mass outbreak of unexpected crying: a manifestation of the affection felt by the staff for a suddenly frail woman who, though loathed by millions across the country, was loved by those who worked for her.

Before taking up the job in March 1989, Slocock admits that she couldn’t stand Thatcher. ‘I recoil when I hear her voice on the radio and turn the television off when she is on,’ she writes.

It seemed despicable that here was a woman Prime Minister who refused to appoint any women to senior ministerial posts. Word got round that Mrs Thatcher would never appoint a female private secretary either, so Slocock felt there was no hope of getting this coveted civil service job. 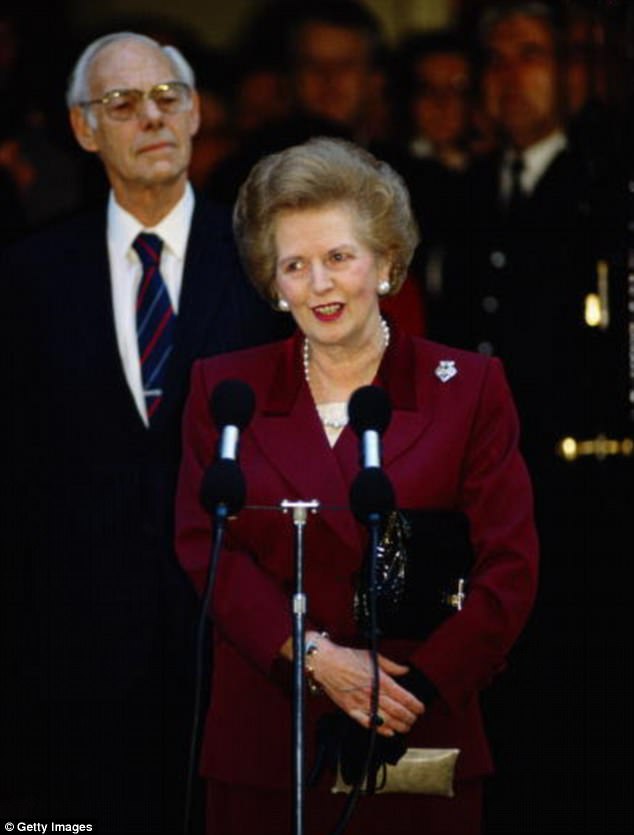 So when Mrs Thatcher greeted her on the stairs at 10 Downing Street with the words: ‘Caroline, how nice to meet you — I brought these hyacinths down here for you’, she was pleasantly surprised — and, after a short interview, even more surprised when she was offered the job there and then.

In this thought-provoking memoir, Slocock recalls her first days in No 10, taking us back to the innocent time of Downing Street 29 years ago: pre-Blair, pre-spin, pre-computers; a place of Ceefax, brick-sized mobile phones, secretaries (known as the Garden Room Girls) coming upstairs to take dictation when called; a place of gathered skirts, shoulder pads, frilly collars, and Denis Thatcher nipping down from the flat every now and then to check the Test score on the ticker-tape machine. While two-thirds of the country by this time was dissatisfied with how Thatcher was doing her job, life inside No 10 seemed to go on as if nothing was wrong.

So skilled did she herself become at writing speeches for Mrs Thatcher that she began to feel ‘like an extension of the Prime Minister’s brain’.

The two of them (both perfectionist workaholics) honed the speeches late into the night, Thatcher using whisky as a form of ‘medication’ to keep calm and awake.

‘She was the only person I have ever seen fall asleep in the middle of a sentence with a Scotch in her hand and wake up a few minutes later with her drink unspilled and then finish the sentence.’

Slocock was dazzled by Thatcher’s ability to focus totally on the matter in hand. One evening, Carol Thatcher came downstairs to ask her mother: ‘Do you want me turn the volume down on Top Of The Pops?’ At first Mrs Thatcher didn’t even hear her daughter’s question; then she said she hadn’t even noticed it was on. 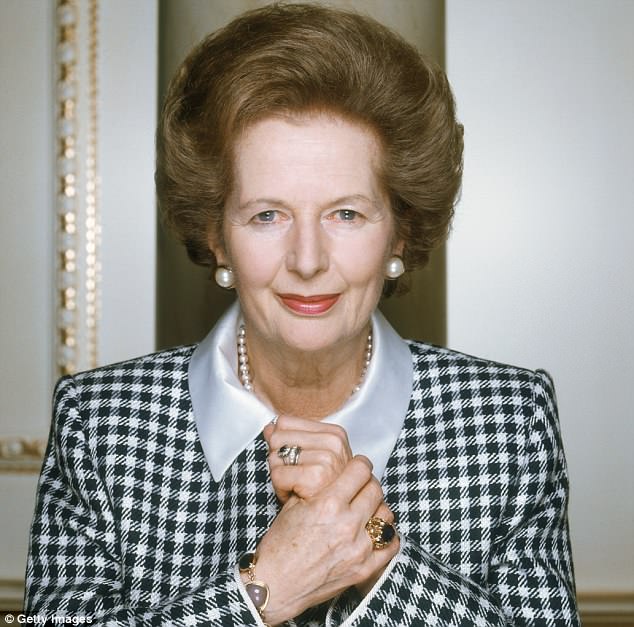 Caroline believes Margaret Thatcher (pictured) treated her male colleagues as unfeminine because she was a woman, not in spite of it

In Cabinet meetings, meanwhile, civilisation was starting to break down. On a typical morning, Mrs Thatcher would open a meeting with the words: ‘I know what you’re going to say, Geoffrey, and the answer is no.’ Then she would lay into Howe’s Green Paper. ‘Your paper is twaddle, utter twaddle, and I don’t know how you have the nerve to submit it.’

Her attacks, Slocock writes, were ‘the sort of behaviour that generally only takes place in families or between couples, when normal conventions about what is socially acceptable do not apply.’

She found it hard to reconcile the two Margaret Thatchers: the kind, protective woman she worked for, and the furious bully. 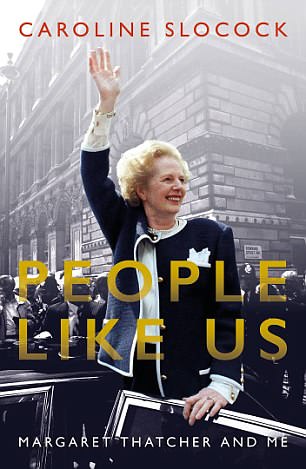 PEOPLE LIKE US: MARGARET THATCHER AND ME by Caroline Slocock (Biteback £20)

Bringing her feminist thinking to bear on this riddle, she concludes: ‘Many people think of Margaret Thatcher as unfeminine in the way she treated her male colleagues. To my mind, it was because she was a woman, not in spite of it, that she behaved in this manner.’

It was her suspicion that her Cabinet colleagues — Nigel Lawson, Geoffrey Howe, Michael Heseltine — didn’t really accept her female authority that made her assert it even more.

‘Discrimination is hard to prove,’ Slocock writes — and she knows a thing or two about this, being a former chief executive of the Equal Opportunities Commission — ‘but when you’re on the receiving end of it from those you work with, it seeps into your soul.’

She thinks it was insecurity, not confidence, that made Margaret Thatcher lash out.

Slocock soon came up against Thatcher’s notorious unwillingness to promote women to high office. She’d been assured that her junior job would lead to promotion: this had been the established trajectory up to now.

But she didn’t get the job. This, she says, was ‘a bombshell’. She assumed it was because she was a woman — and one who had just got married so would probably soon be pregnant.

She has since asked Dominic Morris (the man who was in the job she wanted) whether he can throw light on the non-promotion. He recalls Margaret Thatcher saying to him (when he mentioned that he was expecting Caroline Slocock to step into his job), ‘Oh, no, dear, she’s not one of us.’

What on earth did Thatcher mean by that? Slocock is still trying to work it out. And, 28 years after our first female Prime Minister resigned, the rest of us, too, are still trying to get to the bottom of her weird, contradictory and ultimately self-destructive mental block about promoting other women.