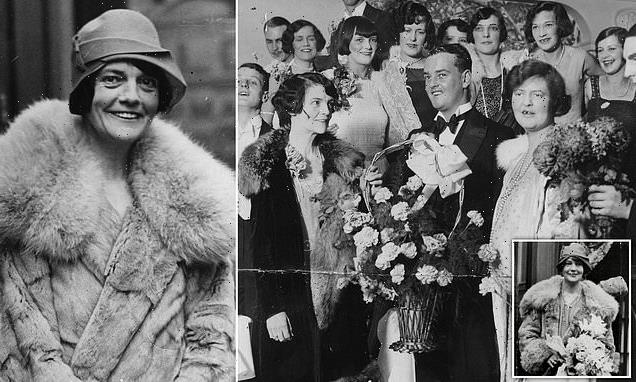 The VERY colourful life of Soho’s ‘Queen of nightclubs’: Mother-of-eight Kate Meyrick who hosted film stars and royalty at The 43 and was jailed five times for breaking 1920s licencing laws is celebrated in a new exhibition

She was a ‘tiny wisp of a woman’ who presided over some of London’s most glamorous nightspots in the roaring 20s, while forging an unconventional path as a single mother-of-eight.

The forgotten history of Kate Evelyn ‘Ma’ Meyrick, known as ‘The Nightclub Queen of Soho’ is celebrated in a new exhibition, which revisits her very colourful life at the centre of London’s burgeoning nightlife as it oared back to life following World War I.

Kate had a small legacy from her great aunt and a share portfolio and rental income from properties in Ireland, and after spotting an advert for a partner to run tea dances, she opened Dalton’s Club in Leicester Square in 1919.

Royals, millionaires and film stars who wanted to indulge in champagne and the Charleston, and flappers who set the trend in their feathered headbands mingled with violent characters and prostitutes at her clubs.

These venues ingored alcohol curfews while boasting of their exclusivity, and Mary found herself in prison five times for playing fast and loose with the licencing laws.

Most popular was the intimate hub the 43 on Gerrard Street, which has been recreated for an exhibition at The National Archives, The 1920s: Beyond The Roar. 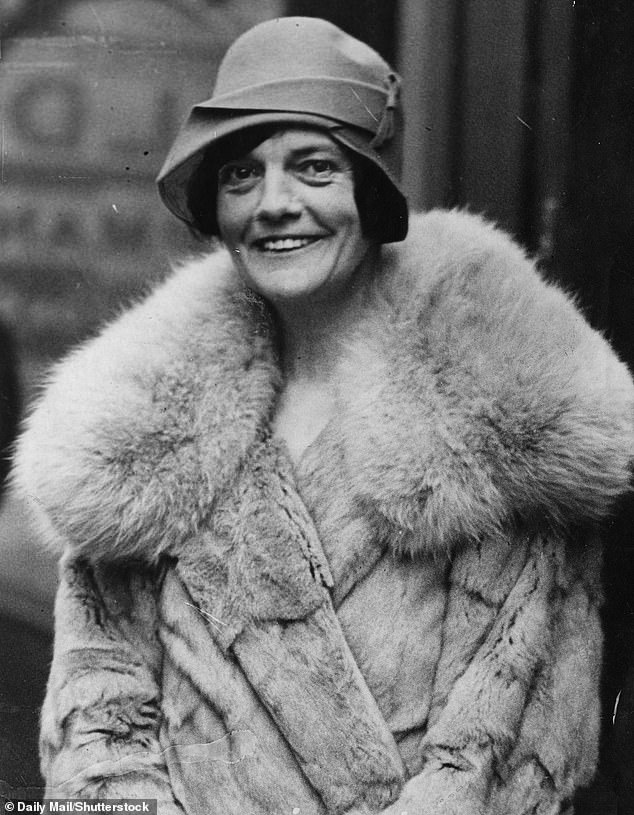 Soho’s famous ’43’ nightclub founded by Kate Evelyn Meyrick (pictured) has been recreated for The National Archive’s exhibition The 1920s: Beyond the Roar

Born in Ireland in 1875, the early years of Kate’s life were turbulent.

Having lost both of her parents by age seven, she was brought up by her maternal grandmother Isabella Bateman and two grand aunts and educated by a governess until the age of 16.

She admits in her memoir to having been a ‘thoroughly wayward child’, who preferred adventure to convention.

Perhaps in preparation for her future glitzy life of jazz clubs and rubbing shoulders with high profile individuals, Kate abandoned her plans to become a doctor after leaving Alexandra College in 1893 and began to network with Dublin society.

According to the Dictionary of Irish Biography, Kate married Ferdinand Richard Holmes Merrick, who was a good-looking, blonde, doctor specialising in psychiatric medicine, in a ceremony performed by her stepfather in St John’s church, Monkstown.

The couple soon settled down on the Hampshire coast after a short period of living in Dublin and welcomed their first child, Mary Isabel in 1900.

Two years later Kate gave birth to their second child Dorothy Elevyn, and the family for reasons unknown decided to change the spelling of their surname to Meyrick.

When Ferdinand began taking residential mental health patients as his practice grew, Kate found herself in risky situations with one patient even getting hold of a carving knife.

Despite being pregnant with their sixth child, she decided to file for divorce in 1910 accusing Ferdinand of ‘cruelty adultery’.

The couple had two more children after reconciling but once again separated with Kate initiating a divorce in 1920 and Ferdinand petitioning in 1921.

They remained married in name only after these unsuccessful attempts to dissolve their union. 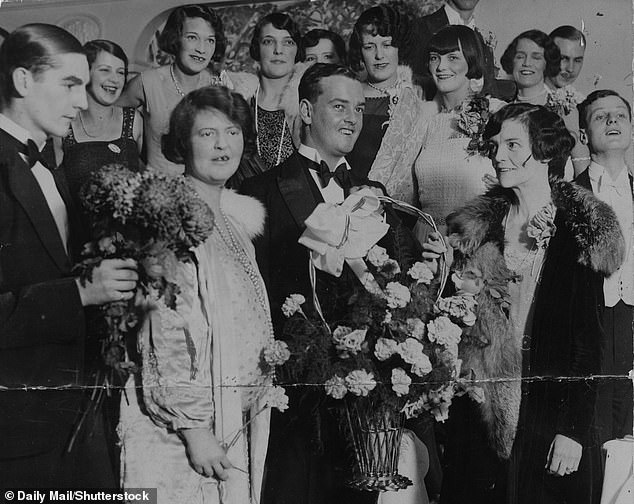 Kate opened a series of nightclubs after the breakdown of her marriage to Dr Ferdinand Meyrick with who she had eight children. Pictured: Kate receiving a basket welcoming her home from prison

Kate had a small legacy from her great aunt and a share portfolio and rental income from properties in Ireland, but decided to further support her family by becoming a business owner.

And the canny businesswoman rightly set her sights on making the most of the burgeoning nightlife industry, with women eager to make the most of newfound independence that came with getting jobs after the war.

World War One had just ended, spiraling the nation into social unrest and protests, but people found comfort in the golden age of the nightclub fueled by jazz music and cabaret.

Stars and aristocrats alike were drawn to the rebellious excitement of venues that ignored alcohol curfews while boasting of their exclusivity.

Kate invested the equivalent of £25,000 in Dalton’s Club according to Women Who Meant Business, which attracted an elite guestlist including the King of Denmark, alongside violent characters and prostitutes.

Then came The 43 Club opening in 1921 after a change in the Licensing Act stated that drinks could be served until 12.30am if accompanied by food.

Kate was repeatedly fined for pushing the boundaries with her clubs, so she decided to get men to front her businesses while she remained a hands-on boss.

Despite being ‘a tiny wisp of a woman’ she kept her eye on guests as they entered her 80-capacity venue to refuse entry to anyone who she found suspicious. 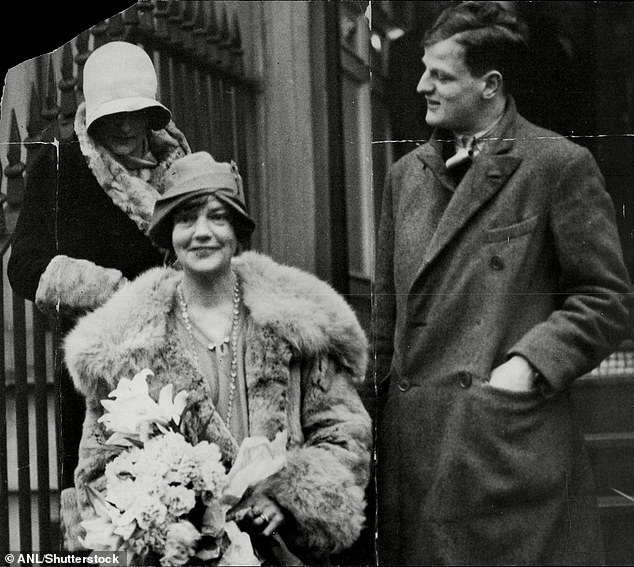 Kate’s clubs has countless raids for breaking licensing laws, before she was given a 15-month prison sentence for offering bribes to Sergeant George Goddard. Pictured: Kate with two of her children

Nightclubs were seen as immoral by some but that didn’t stop the Prince Christopher of Greece Augustus John, Joseph Conrad, Prince Carol of Romania, the Dukes of Manchester, Leeds and Norfolk from visiting The 43, according to Tatler.

Oxbridge rowers and rugby players filled the club to celebrate their victories, and even the Romanian royal family mixed with the ‘Bright Young Things’ of London.

Millionaire Jimmy White once supplied the club’s patrons with champagne all evening after arriving with six Daimlers, while Rudolph Valentino was mistaken for a waiter because he was carrying a tray of cocktails.

Kate, who had eight nightclubs in London and one in Paris, ran The 43 for the longest period despite having to change the name of 43 Gerrard Street, Soho numerous times due to raids.

Her frequent fines for breaking licensing laws, eventually led to her first prison sentence of six months in 1924.

Kate went on to have a series of short prison sentences before suspicions about her hiatus in prosecutions revealed that she had been offering bribes to Sergeant George Goddard.

She wrote to the Home Secretary from prison, claiming Goddard had blackmailed her.

He was dismissed from the police force for ‘neglect of duty and failing to give any satisfactory explanation of his receipt of large sums of ready money from an unknown source.’ 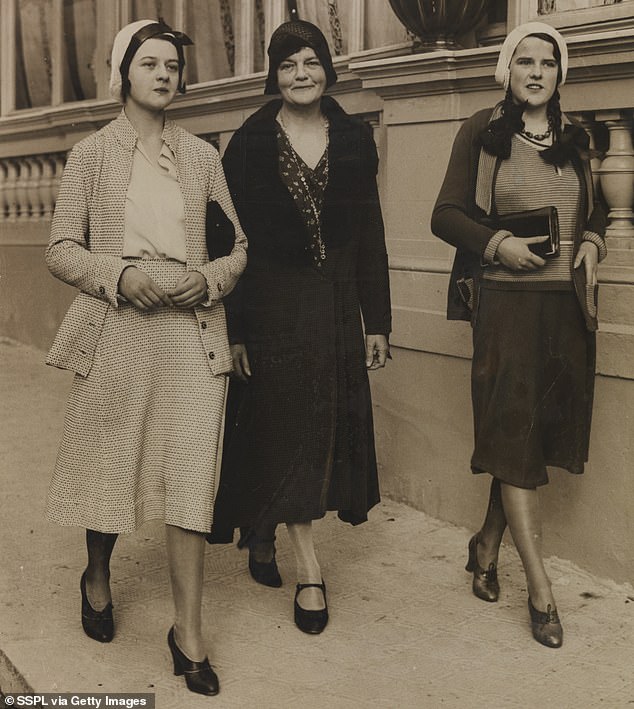 Hannah Fleming of the National Archive, claims Kate went into business to survive after separating from her husband but also because she likes people. Pictured: Kate in Monte Carlo with two of her daughters

Meanwhile, Kate emerged from Holloway Prison two stone lighter and visibly frail after serving just 12 of the 15-month prison sentence with hard labour that she was given.

Having returned to work in the clubs, she went on to be sent to prison twice in the next two years.

Kate finally agreed to end her work in nightclubs after a further court appearance and decided to write her relatively discreet book about her career to generate income. She claimed the high running costs of her VIP clubs and school fees took a large amount of her finances.

The National Archives have been able to get a wealth of information about Kate from her records.

Despite repeatedly breaking the law, Kate was seen as an icon of the 1920s having frequently made headlines while successfully providing for her eight children.

Katie Fox, who is Digital Engagement Manager at the National Archives, researched Kate Evelyn Meyrick for their exhibition The 1920s: Beyond the Roar.

Running until June, the exhibition has the recreation of The 43 nightclub at its heart complete with a stage, piano and chairs set to the sound of 1920s jazz. 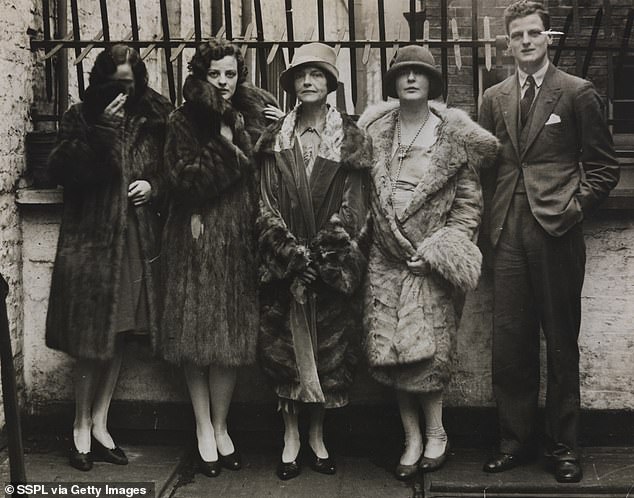 Kate, who died aged just 57, used the profits from her nightclubs to send her daughters to Roedean and sons to Harrow. Pictured: Kate with four of her eight children

The exhibitions manager at the National Archive Hannah Fleming, told My London their aim is to show people what it was like living at a time when men and women could socialise in nightclubs for the first time, however there was also social unrest and huge unemployment.

She spoke about Kate’s inspiration for The 43 saying: ‘Separating from her husband was the impetus for her going into business.

‘It was survival – she had to provide for her children, but she also talks about herself in her memoirs as someone who likes people.’

Kate wrote about her interest in people in her book Secrets of the 43, claiming: ‘It is at night that people become alive and real to me.’

She died of pneumonia aged 57, having sent her daughters to Roedean and her sons to Harrow using profits from the clubs.

Their children went to have well-connected unions with second daughter Dorothy marrying the 26 Baron de Clifford in 1926 and a year later, her eldest, May, wed the 14 Earl of Kinnoull. Eileen married Edward Fitzroy St. Aubyn, an ex-Grenadier Guards officer in 1933, while Irene married Lord Craven in 1939.