Top economists are split over whether the federal government should intervene to bolster the nation's falling population growth rate as debate swells about policies to attract more migrants when many Australians are unemployed.

Immigration has dropped sharply this year due to restrictions on international arrivals to Australia to stop the spread of the coronavirus pandemic, leading to the biggest fall in population growth since World War I. 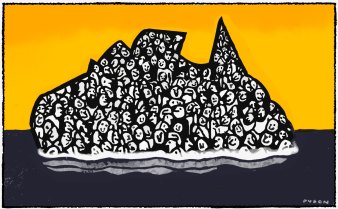 At the same time many others warned the economy would struggle to recover without efforts to increase the migration rate, including University of Melbourne Professor Neville Norman, BIS Oxford Economics' Sarah Hunter, Housing Industry Association chief economist Tim Reardon and a swathe of banking chief economists.

Professor Norman warned of a host of issues from fewer people than expected coming to Australia, including a loss of production and economies of scale, skill gaps for employers and a drop in the ratio of taxpayers to those dependent on welfare due to an ageing population.

Victoria University's Janine Dixon warned businesses would "experience more difficulty in finding skilled labour". NAB chief economist Alan Oster said it was unlikely there would be a skills shortage in the short term with so many Australians out of work and it was "probably not worth looking at specific population policies until any long lasting impacts are identified".

AMP Capital chief economist Shane Oliver said the drop in population growth from 1.6 per cent a year to 0.6 per cent, partly due to the collapse in immigration from international travel restrictions, could knock 1 percentage point off annual growth. This would largely be due to 80,000 fewer homes needed and less consumer spending.

"The government should look to reinstate immigration once it's feasible … but with significant levels of unemployment likely to be sustained for several years the lift to immigration should be gradual," Dr Oliver said.

"The focus should be on boosting … the living standards of those already in Australia, and this does not require a resurgence in immigration."

Mr Koukoulas said post-pandemic immigration should be at low levels. "Included in those benefits [of less population growth] are a lesser need for expensive infrastructure, reduced pressure on housing and an abatement of congestion."

"[We] should not panic about a stationary population and people need to realise that population growth … should not be promoted," he said.

But Ms Hunter said the drag on international student enrolments would be detrimental to universities and, more broadly, businesses would see less demand leading to lower capital expenditure.

"It will also mean lower revenues for the government and will force a reassessment of the services and infrastructure needed," she said.

Commonwealth Bank of Australia chief economist Gareth Aird and St George Bank chief economist Besa Deda both warned about the effects on the housing market and the construction sector. The drop in demand could affect a wide range of industries.

"Retail sales would be weaker than otherwise, as might business formations by migrants with entrepreneurial spirits," Ms Deda said.

Industry Super Australia chief economist Stephen Anthony said the government may see the lower population growth "as an opportunity to rely less on temporary visa migration in future and investment more in current residents in terms of technical training and new apprentices".

Instead, he said the government should focus on helping the disadvantaged leaving South Asia due to environmental problems.

"I don't buy the argument that we need skilled migration at the same time we starve our training and vocational educational institutions of funding and keep millions of people in more or less permanent unemployment."

However, Bankwest Curtin Economics Centre deputy director Rebecca Cassells said Australia was in a position to attract a skilled and diverse workforce in the years ahead.

"Slower population growth will impact on a number of industries and ultimately places downward pressure on consumption and economic growth, as well as constraining innovation," Ms Cassells said.

Start the day with major stories, exclusive coverage and expert opinion from our leading business journalists delivered to your inbox. Sign up for the Herald‘s here and The Age‘s here.