Sporty student, 22, who lost an arm in a horror car accident reveals how she regained her strength by POLE DANCING

A gym bunny who lost her right arm in a horrifying car crash has revealed how she feels stronger than ever – thanks to pole-dancing.

But, in January 2017, life changed forever for the student pharmacy technician, when her car skidded on black ice and ploughed into the central reservation, before rolling down the M6 motorway, costing Becca her right arm, despite doctors at Lancashire’s Royal Preston Hospital battling to save it.

Determined not to become a couch potato, she fought hard to rebuild her strength and before she knew it was back on her pole and she ‘hasn’t looked back’ since. 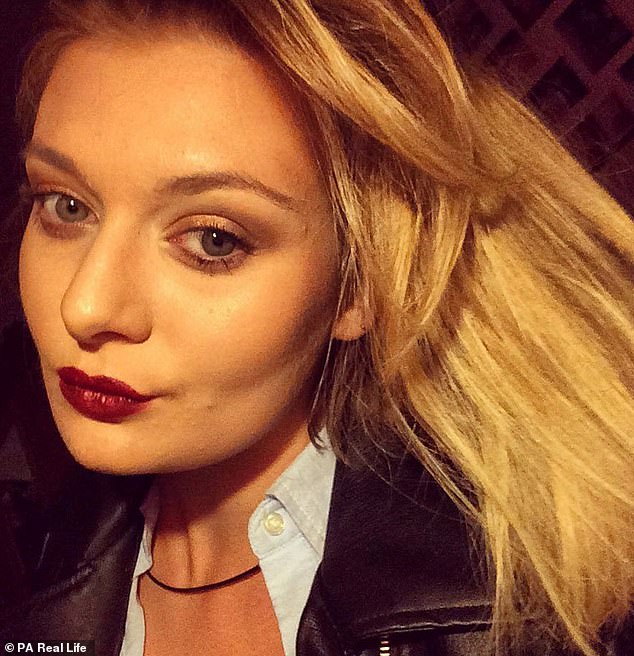 A keen sportswoman, Becca Slater, 22, from Liverpool, loved nothing more than rowing, yoga, wakeboarding, pole-fitness and gym sessions before the accident that changed her life 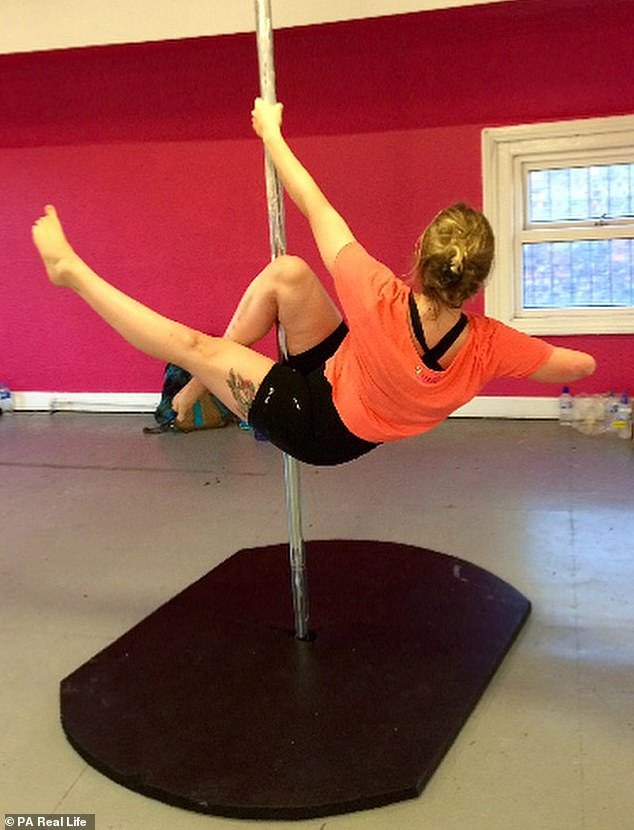 Determined Becca turned to pole-dancing after her amputation and says it not only helped to rebuild her strength, but has left her feeling stronger than ever 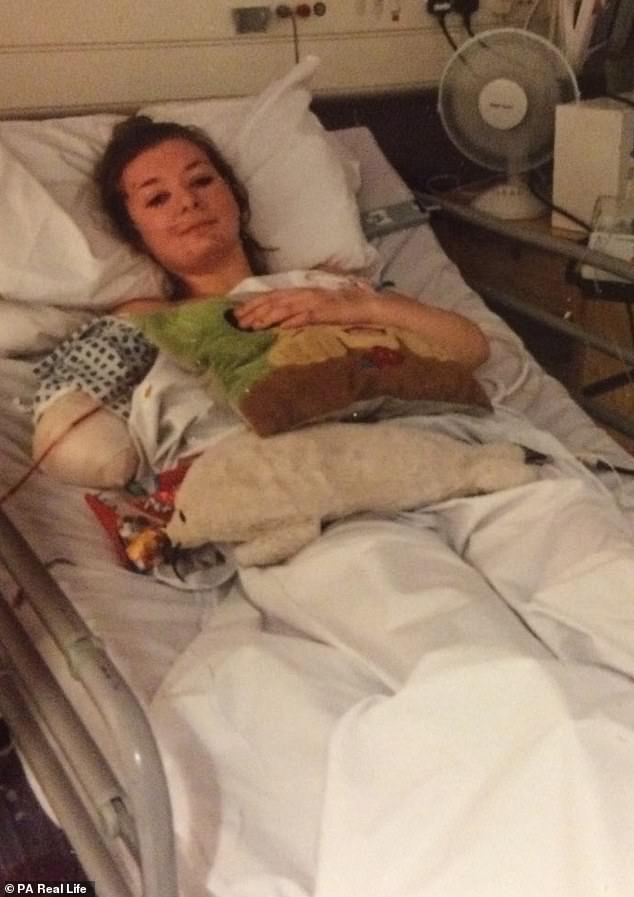 Becca had surgery to insert metal screws and a fibula nail into her broken fibula. She then had to learn to walk all over again

A cornet player with Allerton Brass band since 2016, Becca was on her way to a rehearsal on the morning of January 29, 2017, when the terrifying accident happened.

Bidding her family farewell, she had set off fully expecting to compete with them that evening at the Brass at the Guild 2017 contest in Preston, Lancashire. But she never made it – instead coming off the road in her mangled Citroen C1 car.

‘A lot of what happened that day I have had to piece together from other people but, apparently, my car hit black ice, skidded into the central reservation and rolled,’ explained Becca.

‘By some insane stroke of luck, the car behind had an off-duty nurse in, and the one behind that had two off-duty firefighters, so I was in good hands very quickly.’

She added, ‘I also regained consciousness quite quickly, still not registering what had happened. I was upside down with my right leg out of the smashed driver’s side window.’

‘I remember excruciating pain in my right ankle, like nothing I’d ever experienced – but worse than that was feeling absolutely nothing below my right elbow. I knew then that it was serious.’ 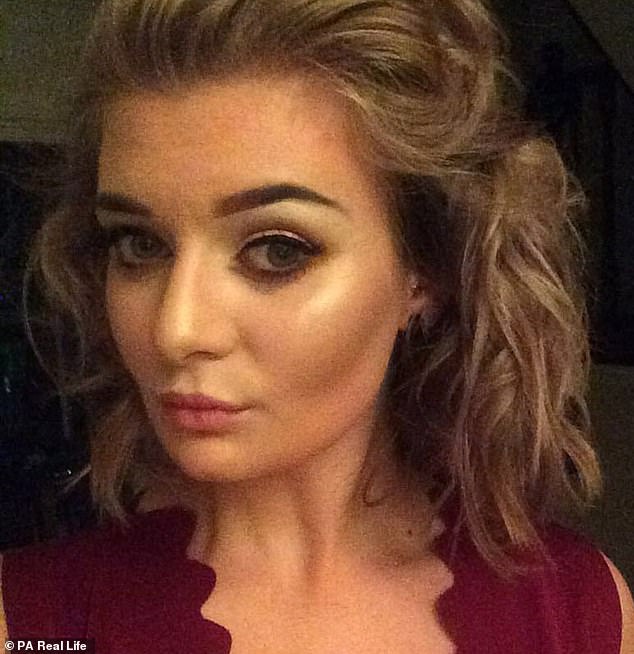 In January 2017, Becca Slater’s car skidded on black ice and ploughed into the central reservation, before rolling down the M6 motorway. It cost the 22-year-old her right arm, despite doctors desperate attempts to save it 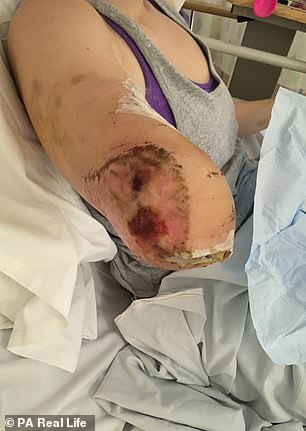 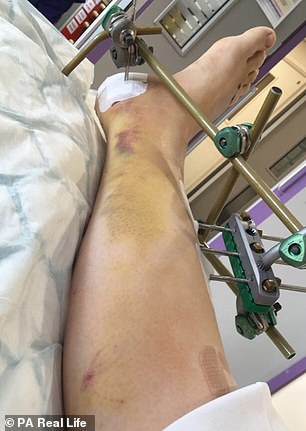 Racing her down to theatre, medics did all they could to save Becca’s arm – but tragically they could not. Above let, Becca’s arm after her amputation, and right, her leg was also injured in the horror smash 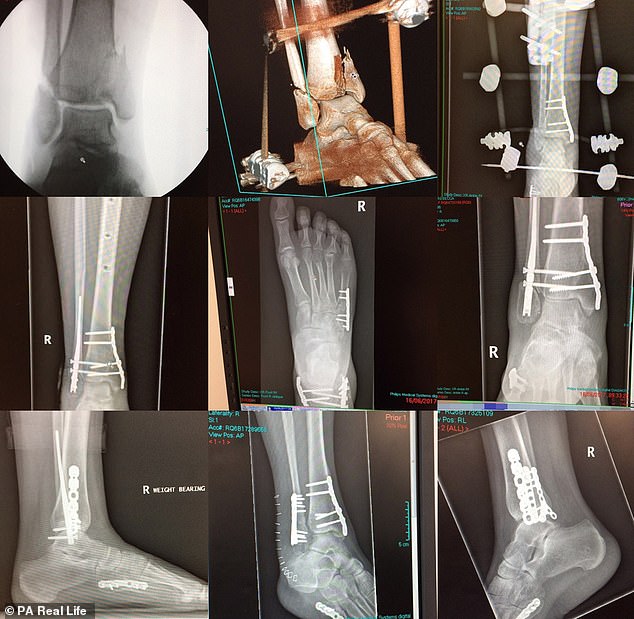 Becca’s injuries included a compound fracture and dislocated right ankle, a broken tibia and fibia, two fractured vertebrae and multiple fractures and dislocations of the metatarsal bones in her right foot. Above, X-Rays showing where Becca’s ankle bones were rebuilt following the crash

Fortunately, the nurse and firefighters that had been travelling behind Becca raised the alarm, staying with her and holding her hand while they waited for help to arrive.

Two fire crews were soon on the scene to cut her free from her car, before an ambulance arrived to whisk her to hospital.

‘Meanwhile, the chief of the fire crew rang my family to tell them I’d been in a car accident and that I had life-changing injuries, but was alive,’  said Becca.

‘It must’ve been so difficult breaking that news, trying to get them to come as quickly as possible without freaking them out too much.’

Upon arriving at hospital, Becca had a CT scan to assess the extent of her injuries – revealing she had a compound fracture and dislocated right ankle, having broken both her tibia and fibia.

She also had two fractured vertebrae and multiple fractures and dislocations of the metatarsal bones in her right foot.

In addition, she had severed the brachial artery, a major blood vessel, in her upper right arm, as well as having a compound fracture and dislocated right elbow.

Racing her down to theatre, medics did all they could to save her arm – but tragically could not.

‘It was the next day, January 30, that they came to talk to me to ask me to sign the consent form for an amputation,’ Becca explained.

‘The first thing I said was, “You’ve got the wrong person, my arm is fine.” But I now see that this was the best thing to do in my case.’ 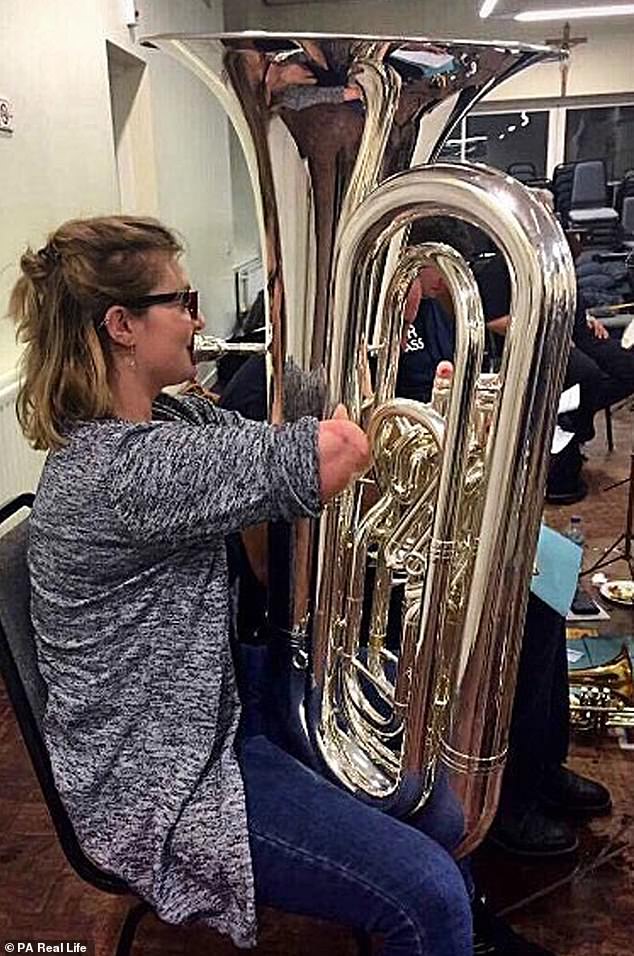 Musical talent: Becca, a cornet player with Allerton brass band, was on her way to a rehearsal the morning of January 29, when her accident happened

She continued: ‘My injuries were just too severe. Even if surgeons had managed to save my right arm, it wouldn’t have been functional.’

‘I didn’t get enough time to process everything – to think about the emotional aspect. There was so much going on, and it was all totally out of my control.’

Following her amputation, Becca remained at Royal Preston Hospital for four weeks, before being transferred to Broadgreen Hospital, Liverpool.

There, she had surgery to insert metal screws and a fibula nail into her broken fibula, after which she had to learn to walk all over again. Once she had recovered, around two weeks later, she begged doctors to discharge her.

‘There was nothing more they could do at that point, other than wait to see if I needed more ankle surgery,’ said Becca.

‘I didn’t want to take a bed up while they did that. I just wanted to get home, and back to my life.’ 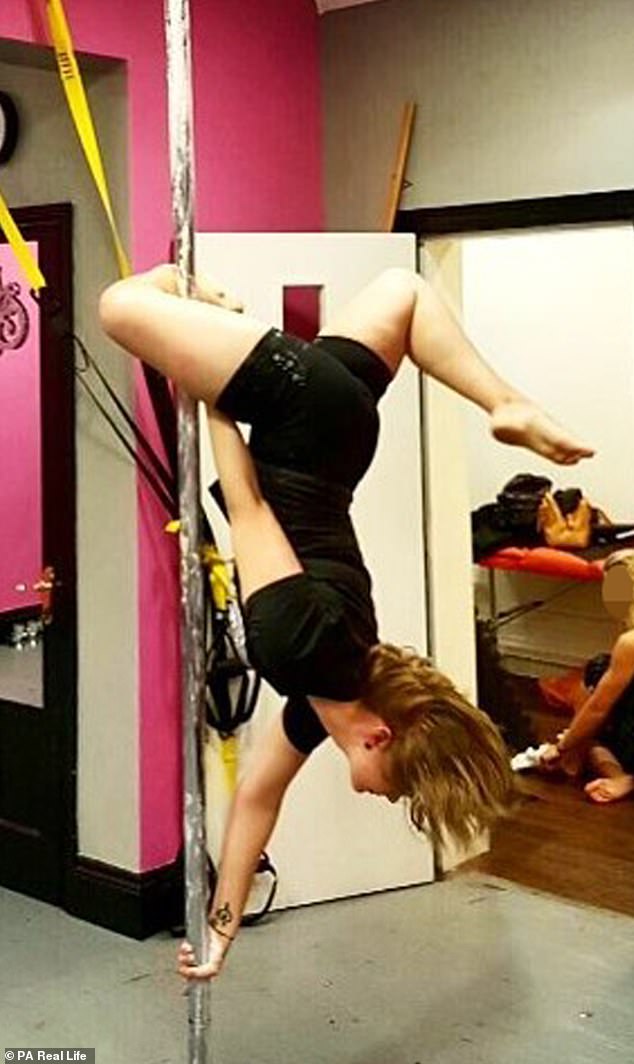 Following the horror car accident, Becca returned to hospital for regular physiotherapy and checkup appointments, during which time her mind turned to sport 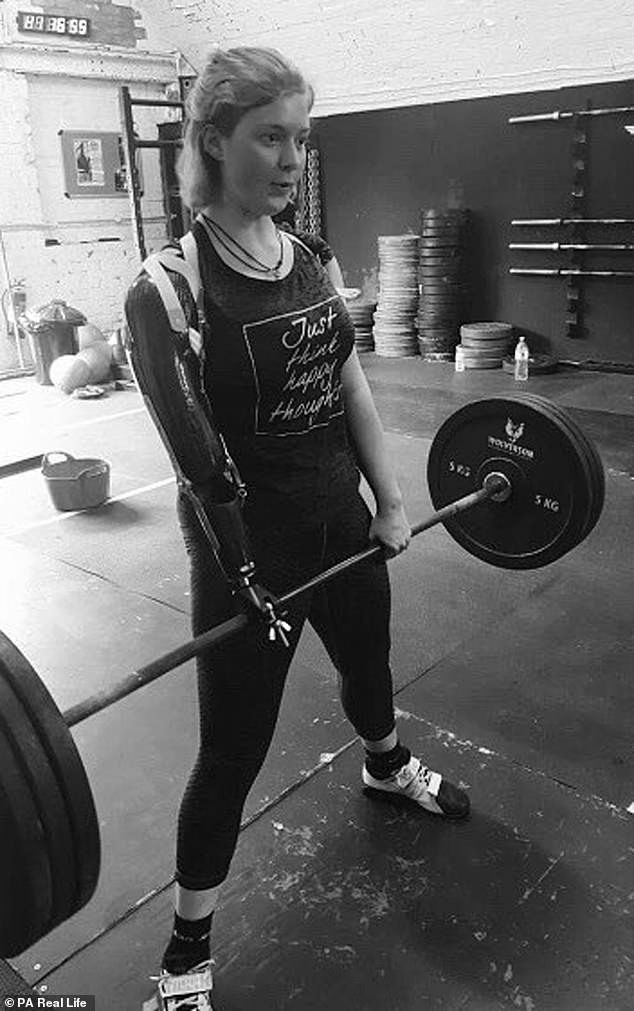 In summer 2017, around six months after the crash, determined Becca returned to the gym for the first time 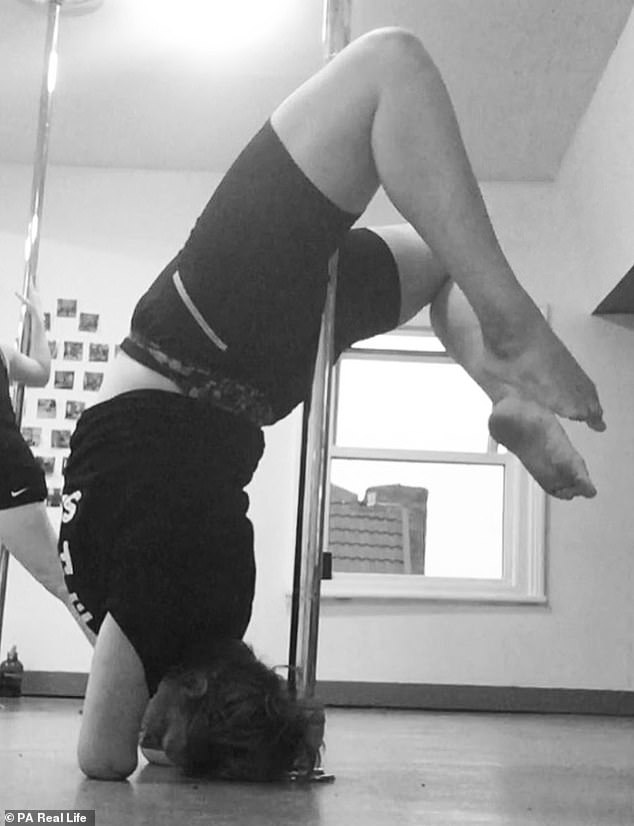 Towards the end of 2017, after having to learn to walk again, Becca went to her first pole-fitness class since her car crash. She started crying because she ‘couldn’t do it,’but she continued as she was so keen to get strong again

Continuing her recovery at home, Becca returned to hospital for regular physiotherapy and checkup appointments, during which time Becca’s mind turned to sport.

Having been in ‘the best shape of her life’ before the accident, she was keen to rebuild her strength.

Then, in summer 2017, around six months after the crash, Becca returned to the gym for the first time.

‘As I was on so many painkillers, my memory of the first couple of weeks in hospital is very hazy but, apparently, even back then, one of the first things I said to the doctors after my surgery was, ‘Can I go to the gym?’ recalled the gym bunny. 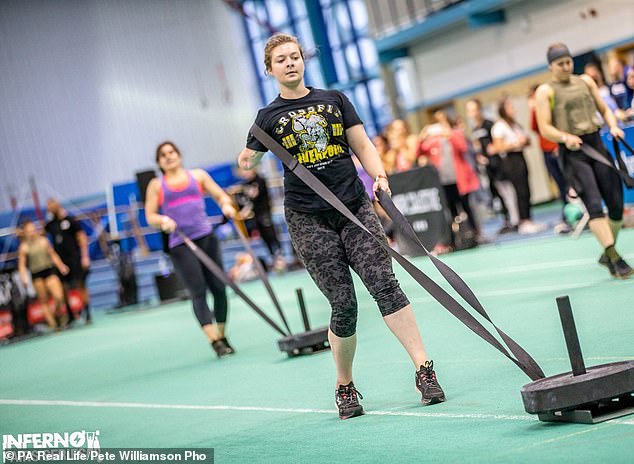 Having been in ‘the best shape of her life’ before the accident, Becca was keen to rebuild her strength 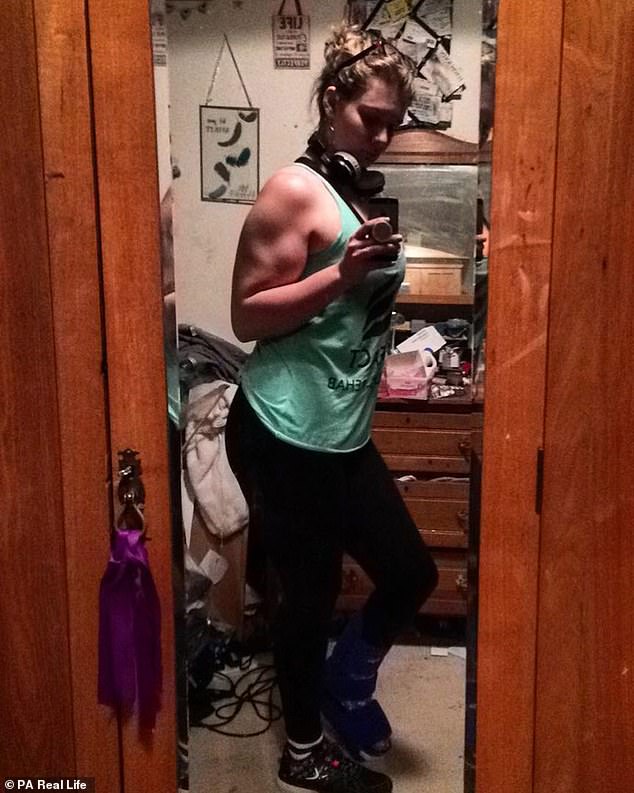 ‘Fitness has always been important to me, and my way of coping with things. It was heartbreaking to lose all that strength I’d worked so hard to build up.

‘Mentally, that was very draining. I looked around at all the equipment I wanted to go on, but realised I couldn’t. I had to adapt and do things differently. Physically, I had lost a lot of muscle, so I tired very easily.’

Still, towards the end of 2017, after having to learn to walk again following a second bout of ankle surgery called a bone graft, Becca went to her first pole-fitness class since her car crash.

‘In my first pole class after everything, I started crying because I couldn’t do it,’ continued Becca. ‘But I was determined to get strong again – and now here I am.’

Focused on success, she vowed to keep trying – going to classes twice a week.

‘The teachers were amazing and so supportive,’ said Becca.

‘All the one-handed tricks I’d done before were with my right hand, so I had to rebuild strength on my left side.

‘It was difficult to push off from my right ankle too, as that was still very weak – but I pushed through and worked around it.’

Now, not only is Becca back on the pole, but she is also wakeboarding, rowing and lifting weights in the gym again. 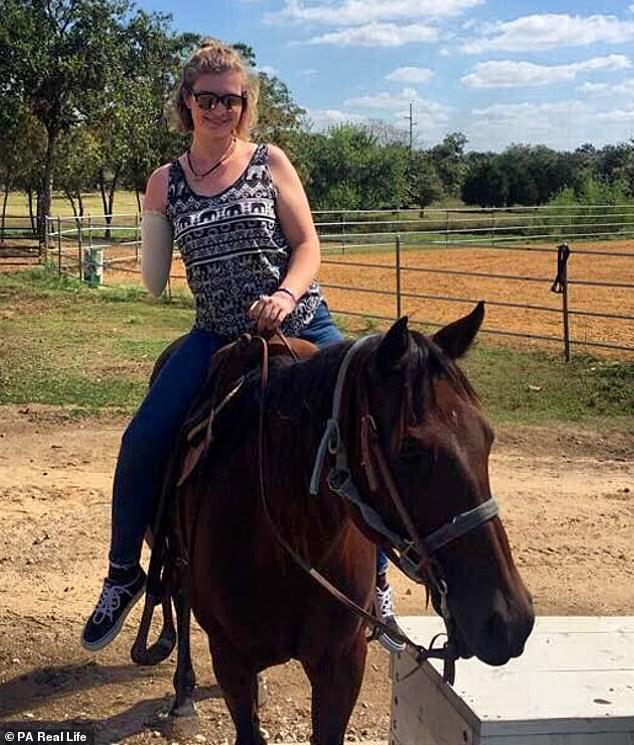 Now, not only is Becca back on the pole, but she is also horseriding, wakeboarding, rowing and lifting weights in the gym again 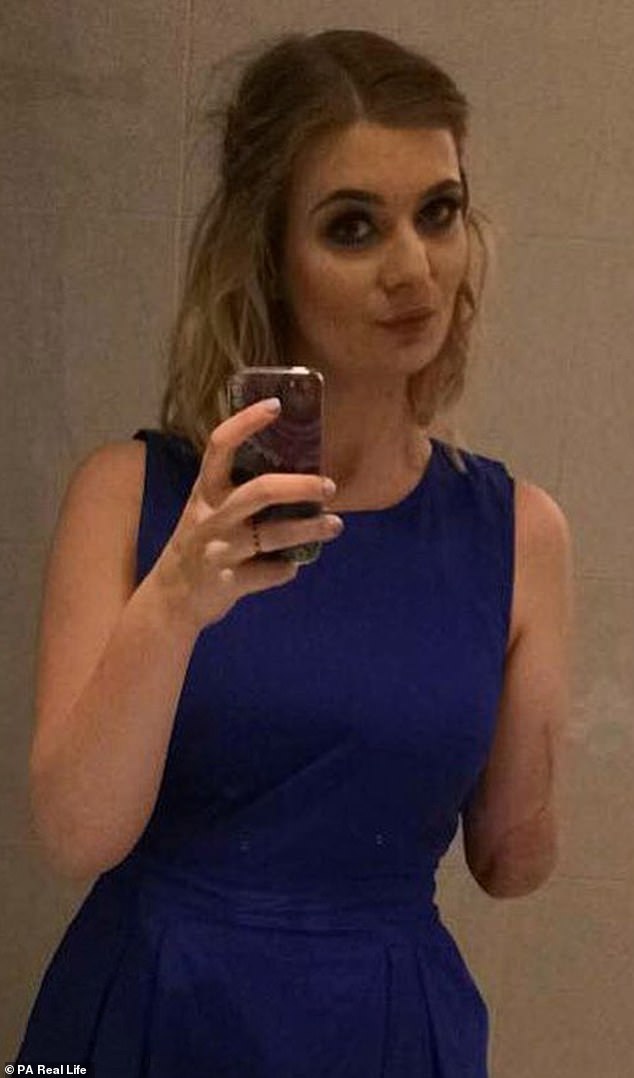 Becca has now started a blog, titled A Helping Hand, with the aim of showing other amputees they are not alone 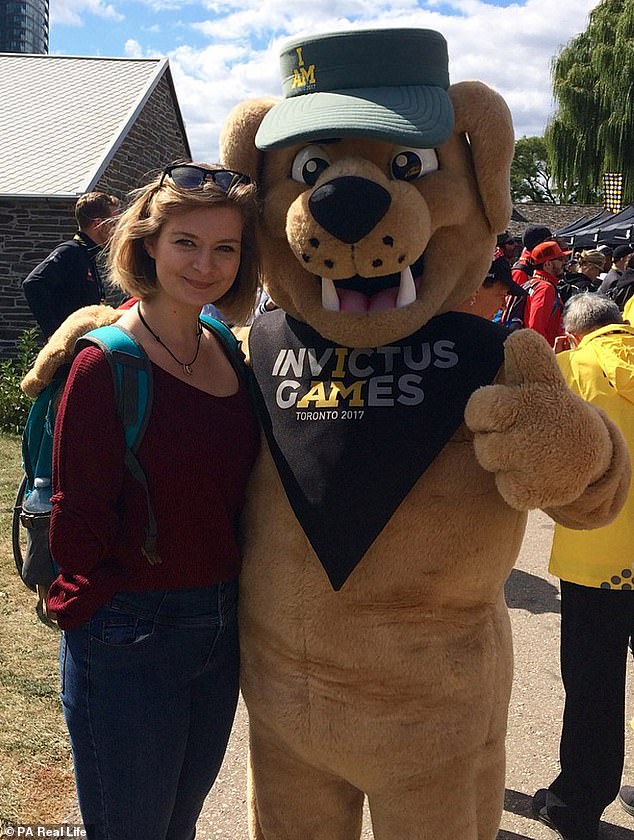 Sports-lover Becca was all smiles as she attended the Invictus Games in Toronto, Canada in 2017

She has also started a blog, titled A Helping Hand, with the aim of showing other amputees they are not alone.

‘Physically, while I’m still getting there, I’m mentally a lot stronger,’ explained Becca.

‘I started the blog as my friends kept telling me I had a story that is worth telling.

‘By putting myself out there, I want to show others that their feelings are okay, and they aren’t alone.

‘I hope that through my sports I’ve also shown that, even if you have to do things differently, don’t let anyone stand in your way.’