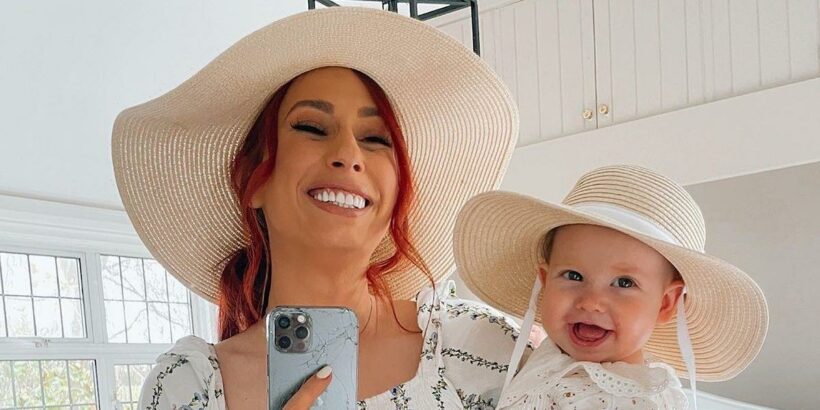 Stacey Solomon has revealed that she gets "embarrassed" talking about her swimming pool, as it isn't "relatable".

The Loose Women star, 32, took to Instagram to give her followers an update on the pool, which is currently undergoing a complete makeover due to it being unsafe.

Stacey explained how it's been a slow process but it's nearing the end now, as she showed off the new tiles which are currently being fitted.

The mum-of-four, who recently gave fans a glimpse into her Easter celebrations, then told how her followers are always asking about the swimming pool, so she thought she'd provide an update.

Stacey shared footage of a team of workers who were busy cleaning the pool, as she and her baby daughter Rose, six months, watched on.

The 32 year old wrote: "I missed the jet washing I was too late they have done it and started tiling. I can't we believe we have tiles".

Stunning silver and grey tiles are currently being fitted in the enormous swimming pool, which came with Stacey's lavish countryside home.

She and fiancé Joe Swash, 40, moved into the sprawling mansion last year, along with their two children, Rex, two, and Rose, as well Stacey's two sons, Zach, 14, and Leighton, nine. She went on to admit that it makes her "cringe" when she posts about the pool, as it almost makes her "feel embarrassed".

The TV star wrote: "Sooo many of you asking to see the tiles…

"But I know this is the most unrelatable content ever so I'm sorry. I do cringe charing it… I almost feel embarrassed for some reason.

"But you guys genuinely ask about it every single day so here's the update! Pickle Cottage came with this pool but it needed a safety update and fixing and it's finally coming together." Explaining why work on the pool has taken so long, Stacey added: "The original people who started n it just left the job in the middle of it so it's taken over a year to get to this point so I do get excited to see it near an end."

Just a few hours later, Stacey returned to her Instagram Stories to reveal that she'd been inundated with nice messages from her followers, who reassured her that she shouldn't be embarrassed about sharing snaps of her pool.

One of her followers sweetly wrote: "Looks amazing so far! Never be embarrassed, you have worked your arse off for Pickle Cottage & we all LOVE you tonnes! Please keep sharing it all with us!"

A second fan added: "Do not feel in any way cringe sharing this. You moved into a house you worked hard for and it happened to have a pool. We are desperate to see it and nothing but happy for you. It already looks FABULOUS!"

Clearly touched by the messages she'd received from her 5.1 million followers, Stacey wrote: "LOVE YOU

"I honestly love you all so so much. Thank you for being the absolutely best insta family ever. And I'll keep you updated."