STEPHEN GLOVER: Trump was right to give both barrels to Germany over making itself reliant on Moscow and enriching a murderous regime in the process

What kind of people have we become that we greet a visiting American president with noisy protests and a 20ft balloon of him dressed in a nappy?

Donald Trump may be an obnoxious, morally flawed human being. He is certainly a maverick. But he is also the leader of the free world and of our closest ally, whose goodwill we will need more than ever in a post-Brexit world.

The Germans or the French or the Italians would not indulge in such puerile antics. So why do we? Why must we put our largely fabricated moral outrage in front of this country’s national self-interest?

All I can say is that I hope the notoriously over-touchy President does not fall into the error of believing the protests and the fatuous balloon are somehow representative of what most Britons feel about his visit to our country. 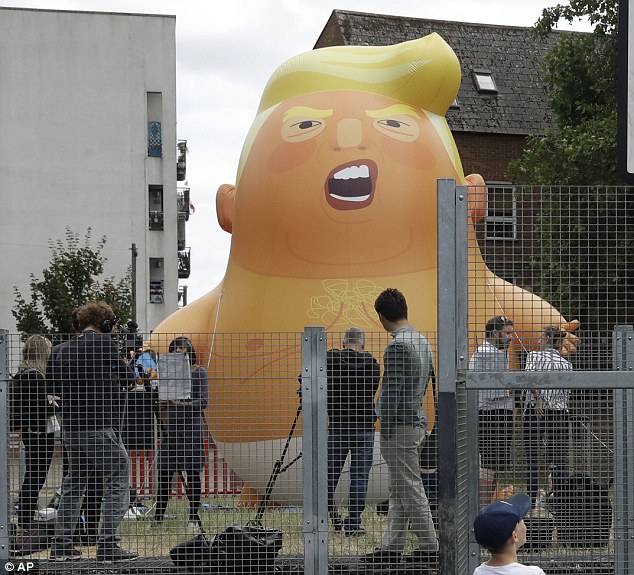 What kind of people have we become that we greet a visiting American president with noisy protests and a 20ft balloon of him dressed in a nappy? 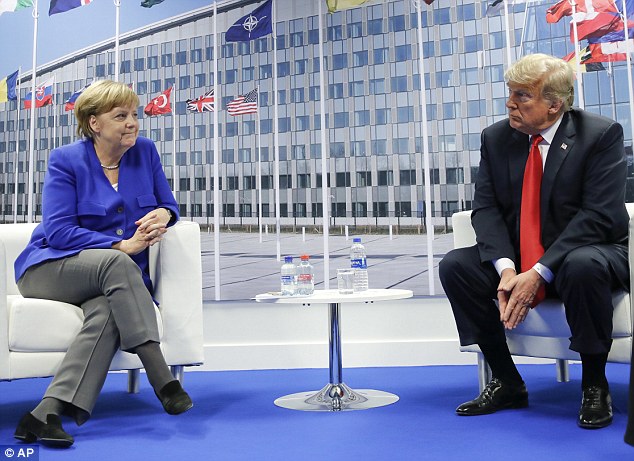 In his tactless and outspoken way, Trump hit the bullseye in taking Germany, and its self-satisfied leader, Angela Merkel, to task before a Nato summit in Brussels. Trump was absolutely right to chide Germany for making itself so reliant on Moscow for its supplies of gas, and enriching a corrupt and murderous regime in the process

The great majority of people, I strongly suspect, will think it impolite as well as foolhardy to treat the democratically elected leader of the United States with such discourtesy. Doubly so, given that visits by far greater monsters than Trump have passed virtually unnoticed.

How many of these voluble, Leftist, anti-Trump demonstrators objected to the visit in 2015 of China’s President Xi Jinping, neither democratically elected nor especially well-disposed towards this country? Very few, if any.

More from Stephen Glover for the Daily Mail…

I also wonder whether it ever occurs to these zealots that Donald Trump may actually be right about some things, and occasionally deserves our support — even congratulations — rather than automatic and unconsidered censure?

For example, he seems to be making progress in persuading North Korea to give up its nuclear weapons, though admittedly he is far from an agreement. Still, he has achieved more in a few months dealing with this potentially lethal regime than his predecessor, Barack Obama, did in eight years.

And yesterday, in his tactless and outspoken way, he hit the bullseye in taking Germany, and its self-satisfied leader, Angela Merkel, to task before a Nato summit in Brussels.

Trump was absolutely right to chide Germany for making itself so reliant on Moscow for its supplies of gas, and enriching a corrupt and murderous regime in the process.

His suggestion that it imports between 60 and 70 per cent of its energy requirements from Russia is bang on. Such a high degree of dependence on a potential adversary is reckless. Germany dare not stand up to an increasingly belligerent Russia because Vladimir Putin could at any stage threaten to turn off the gas taps.

Moreover, as Trump pointed out, Berlin is pouring billions of euros into Putin’s not particularly full coffers, helping to rescue an economy that would otherwise be even more on the skids than it is. He also complained that German politicians had been working for Russian energy companies after leaving politics.

Needless to say, the American President’s characteristically over-the-top expressions — he said Germany was a ‘captive’ of Russia, and ‘totally controlled’ by it — unnerved normally consensual European diplomats.

Jens Stoltenberg, the Nato Secretary General and an easy-going Norwegian, was reportedly shocked by Trump’s tirade. Nothing like it had ever been heard before in an organisation which likes to hides its differences behind closed doors.

Trump fired a second, and no less well-aimed, barrel at Angela Merkel over Germany’s low contribution to Nato. Here again he was on solid ground, and Merkel’s subsequent irate riposte that her country ‘does a lot for Nato’ was pretty disingenuous.

For the truth is that Europe’s largest economy relies on America, and to a much lesser extent on Britain, for its defence. While the U.S. spends 3.5 per cent of its gross domestic product (GDP) on defence, Germany devotes a paltry 1.24 per cent. 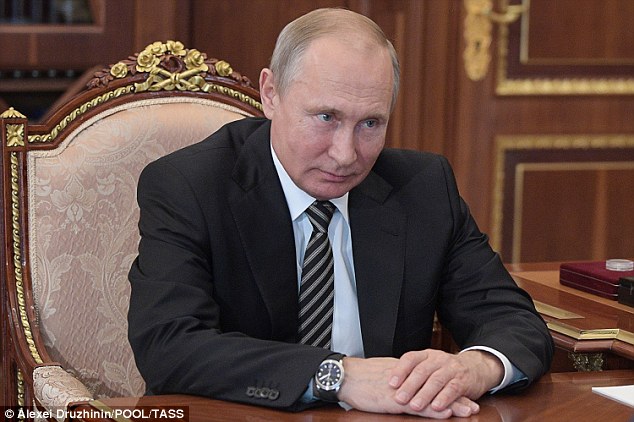 Trump’s suggestion that Germany imports between 60 and 70 per cent of its energy requirements from Russia is bang on. Such a high degree of dependence on a potential adversary is reckless. Germany dare not stand up to an increasingly belligerent Russia because Vladimir Putin could at any stage threaten to turn off the gas taps

It has undertaken to reach the Nato target of 2 per cent (which Britain already just meets) by 2030. But as Trump pointed out yesterday: ‘They could do it tomorrow.’

Why don’t they? Because German politicians — like French, Italian and, to a smaller degree, British ones — have over many decades got into the lazy habit of thinking it is America’s responsibility, not theirs, to pay for the defence of Europe.

What made sense after the end of World War II, when Western Europe was impoverished and unable to defend itself against Soviet aggression, no longer makes sense more than 70 years later, when the EU is the world’s largest trade bloc.

Believe it or not, America’s total defence expenditure of £515 billion in 2017 was more than two-and-a-half times that of all the other 28 Nato countries combined. It’s true that much of America’s war chest is not directly spent on defending Western Europe. Nonetheless, the imbalance is grotesque.

Britain can’t evade some culpability, and will have to spend more on defence if it wishes to be taken seriously by the U.S. after Brexit. But Germany is most at fault because it is the richest European nation and yet spends less on defence as a proportion of GDP than almost any other.

What a strange and contradictory country Germany is! On the one hand it unguardedly makes itself reliant on Russia, a potential adversary, for its energy supplies, having unwisely turned its back on nuclear power.

At the same time it expects Uncle Sam to go on bankrolling its defence, leaving Berlin significant resources to be spent on welfare or health and — so Donald Trump believes — on boosting Germany’s export drive.

Yet the same country that is unprepared to pay for its own defence, and so militarily cuts a very unassuming figure in the world, turns into a ruthless bully in the realms of the EU.

Greece has been reduced to penury by being forced to ingest a noxious economic medicine brewed in Berlin, while Italy struggles to keep afloat because the euro’s exchange rate, which suits the export-driven German economy, is strangling its own.

In human terms, Germany resembles an overfed and selfish baby, expecting to be sustained by free rusks and endless supplies of milk while refusing to face up to its grown-up responsibilities in the world.

And that brings me to Brexit, where it is widely thought that, like some overmighty pasha, Angela Merkel has to only click her fingers if she decides the time has come to bring Michel Barnier’s torturing of British negotiators to an end.

Last week, before unveiling her flawed plan to the Cabinet at Chequers, Theresa May scuttled off to the court of the German Chancellor to set out her pots and pans for inspection. She appears to have received an encouraging grunt — or so, at any rate, our craven civil servants and grovelling politicians believe.

Many Britons recalling the history of the 20th century will find it intolerable that a British prime minister should be expected to bow and scrape in front of a German Chancellor.

For the preservation of my sanity, I prefer not to dwell on such thoughts but to focus on the seeming inevitability of Donald Trump setting in motion a partial withdrawal of American support for the defence of Europe.

If this happens, Germany will require new military partners. And where will she find them? In Paris, certainly. But in London, too. Europe will not be safe without Britain. And that is why we should not be crawling obsequiously towards those who need us.