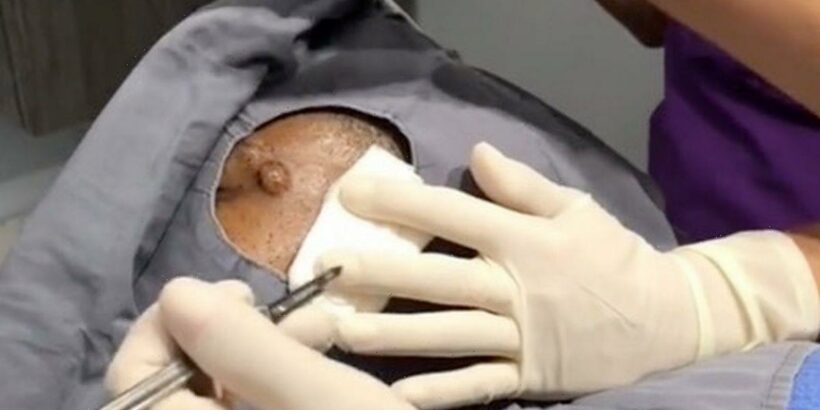 Dr Pimple Popper has left people clutching their stomachs after sharing a video of a huge facial cust being squeezed and mopped up.

In the clip, uploaded on her official @drpimplepopperTikTok account, the medic, real name Sandra Lee MD, explained how she dealt with the fluid-filled bump.

First, she makes a tiny incision with one of her surgical tools and gently squeezes on either side.

The cyst, from a patient with steatocystoma, now releases a river of yellow fluid which she wipes away as she goes.

Next, she uses another tool to grab a firmer white tissue from inside the cyst and begins to pull it out.

Is this a good squeeze? Have your say and see what others think in the comments

As it comes out, a pink-coloured tissue is yanked out with it and the medic cuts it away with some scissors.

It looks like this is the cyst sac and is essential that Dr Lee removes this so the cyst does not fill up again and reoccur.

She used the "butter" emoji in a follow-up clip where she showed herself dealing with more of the cysts.

The video was watched more than 3.7 million since Dr Lee uploaded it on the app five days ago (July 11) with the caption: "A nice squeeze for you this weekend!"

Several thousand people commented on the clip and many admitted it was so graphic it had them feeling all sorts of uncomfortable physical sensations.

One wrote: "Boy when I tell you… my eyes got WATERY."

A third user said: "OK I just wanted to see it pop everything after made my tummy hurt."

"This had me itchy the way they were digging in and the blood and the cut," someone else wrote.

Meanwhile, others were disgusted by the sight of the inside of the cyst more than the liquid, with one joking: "It looked like you were pulling his brain out."