Student, 22, reveals how her severe pins and needles turned out to be a terrifying nerve condition that left her unable to WALK (but now she’s back in the gym after intensive physiotherapy)

A student revealed how she learnt to walk again after being struck down by a terrifying nerve condition that left her bed-bound.

Jodie Granger, 22, from Cornwall, was left unable to breathe, talk or move independently after being struck down by the rare nerve condition Guillain-Barré syndrome (GBS).

Jodie first noticed symptoms in April last year when she started suffering from pins and needles in her hands and feet and soon found it difficult to move her arms and legs.

The sensation spread from her extremities towards the centre of her body and within a week Jodie was admitted to the intensive care unit of King’s College Hospital, London. She spent eight weeks in hospital, learning how to walk and talk again.

Now, following a year of intensive physiotherapy, Jodie is strong enough to lift 75kg at the gym. However she still bears the emotional scars of her medical trauma. 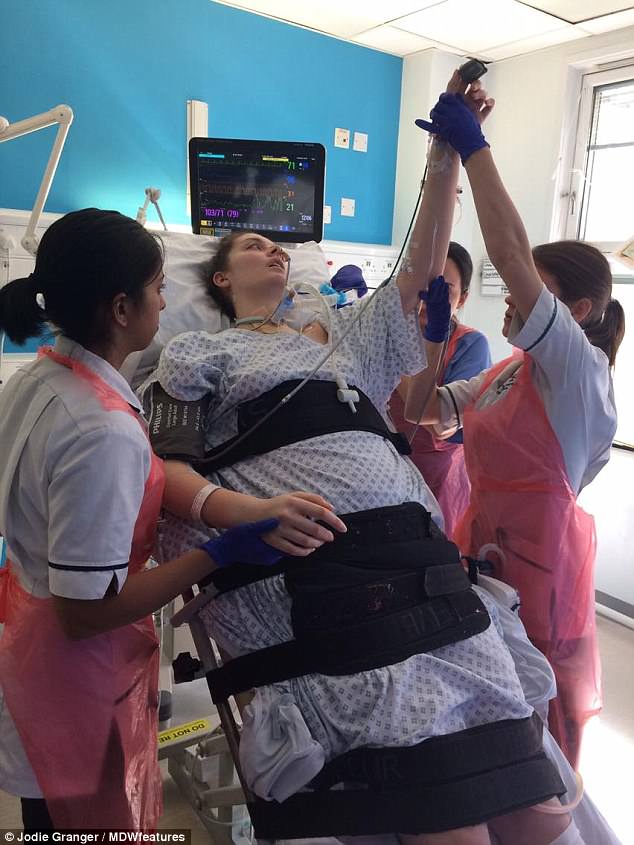 Jodie Granger, 22, from Cornwall, was left unable to breathe, talk or move independently after being struck down by rare nerve condition Guillain-Barré syndrome (GBS) in 2017 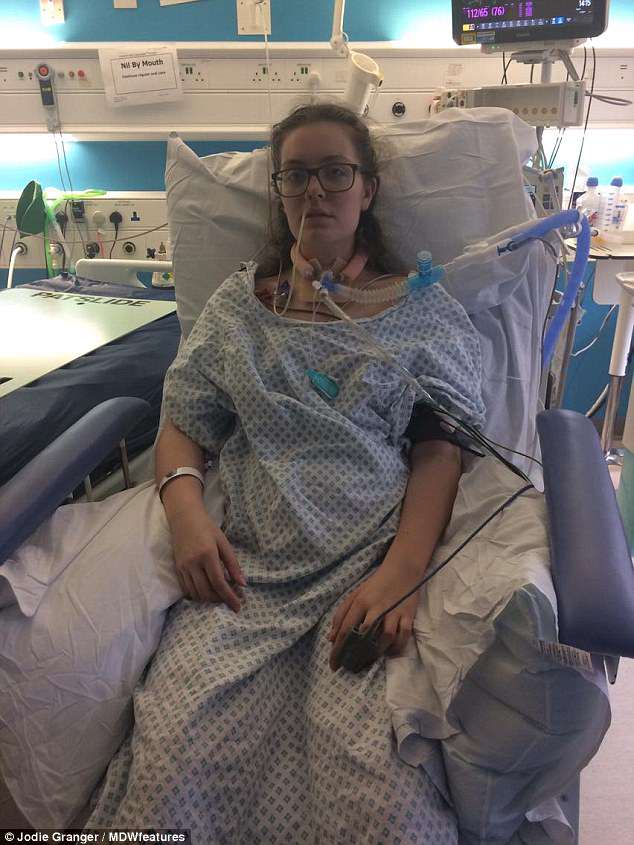 Last April Jodie first noticed a gradual change in her hands and feet, which quickly spread towards the centre of her body, and within a week she was in the intensive care unit 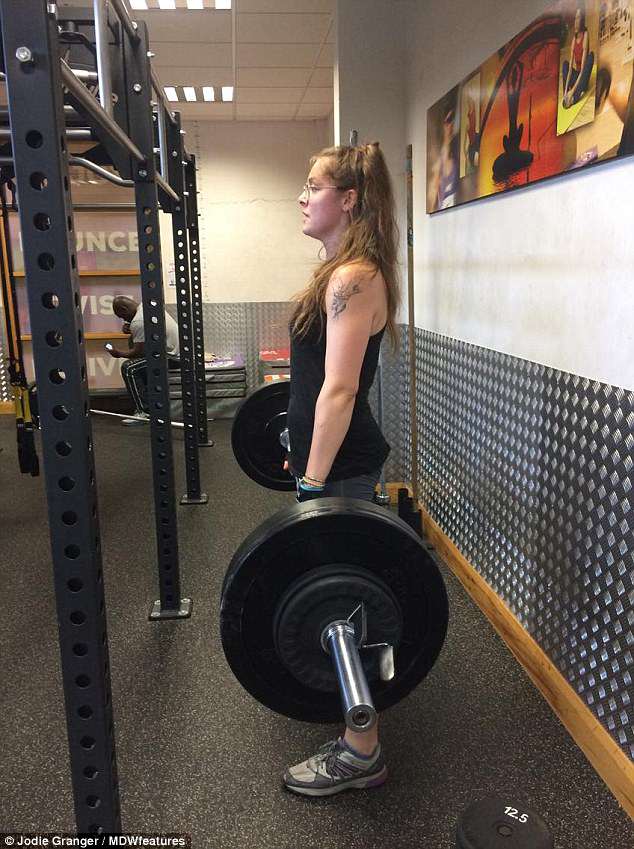 However a year later Jodie has turned her life around, learning to walk and talk again, and she is now strong enough to lift 75kg weights in the gym and is even retaking her second year at university

Recalling her early symptoms, Jodie said: ‘I felt the change of sensation in my hands and feet and it just spread towards the centre of my body.

‘I had severe pins and needles, which felt like burning, and muscle weakness, numbness on the skin. It got harder to move my limbs and even walking felt like such an effort.

‘Within a week I was in intensive care unable to move and had a tracheotomy performed on me, meaning I was unable to talk.’

Guillain-Barré syndrome is thought to be caused when the immune system, the body’s natural defence against illness and infection, mistakenly attacks and damages the nerves. 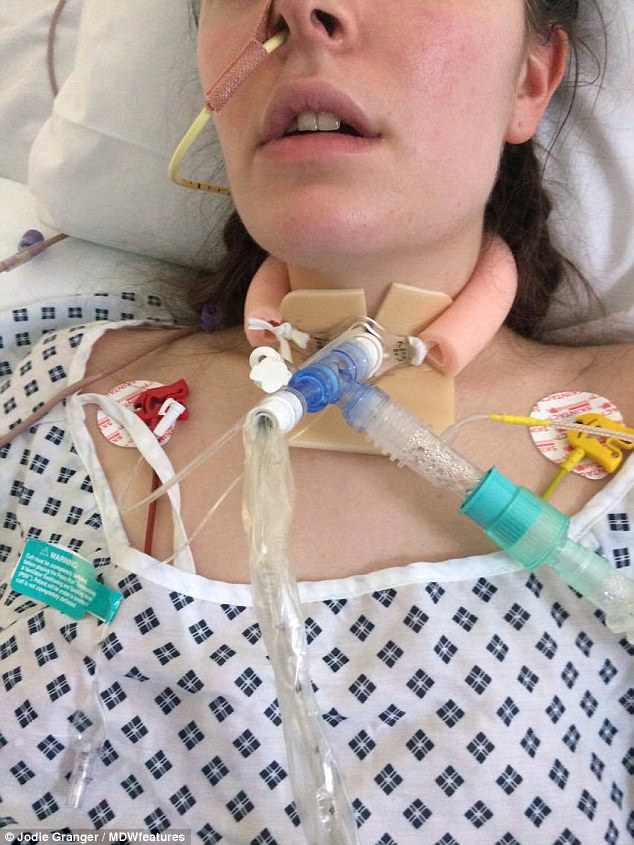 She was quickly admitted to the King’s College Hospital’s Intensive Care Unit where she was fitted with a ventilator to allow her to breathe, leaving her unable to talk

It mainly affects the feet, hands and limbs, causing problems such as numbness, weakness and pain.

Symptoms can last for weeks or months but most sufferers make a full recovery. However it can occasionally be life-threatening and some people are left with long-term problems.

Jodie, a student at Goldsmiths University, was unable to control her body movement and had to be medically ventilated in hospital. She depended on nurses for everything including feeding and hygiene.

After weeks of battling the symptoms she then faced gruelling sessions of intensive physiotherapy to combat the effects of the debilitating disease.

She admitted: ‘At this point I was probably at my most vulnerable physically and mentally. 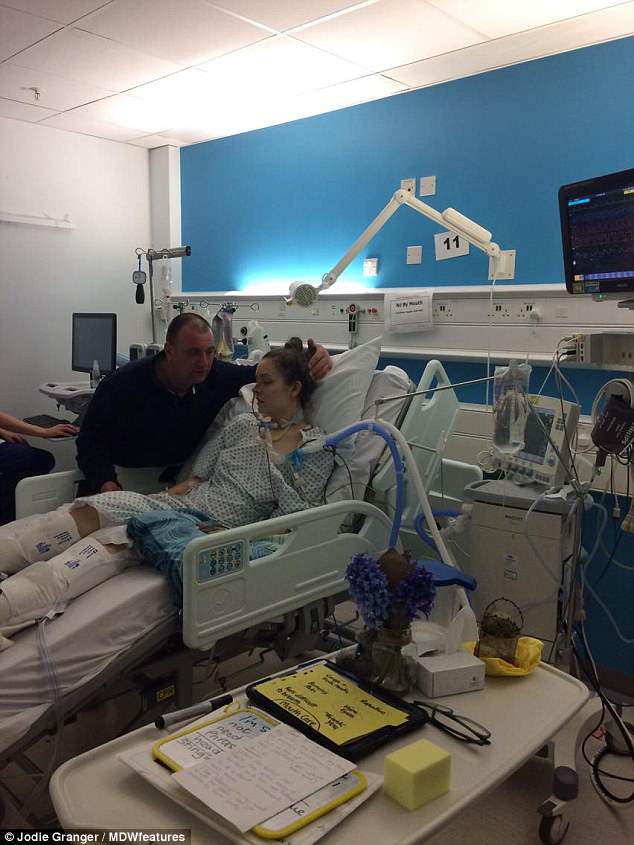 ‘I was in so much pain and discomfort that it’s almost impossible to explain, on top of the need to communicate these things at the time but not doing so quick enough or effectively enough as you have to try and spell things out one letter at a time.

‘You have to be weaned off the ventilator before relearning how to support your own breathing via a speech and language therapist.

‘You also have to undergo physio as movement to limbs start to come back, including fine-tuned movement that you go through with an occupational therapist, and other wider ranges of strength and mobility focused by the physiotherapists.’

Jodie was in hospital for eight weeks and could walk again after six thanks to intensive physiotherapy. 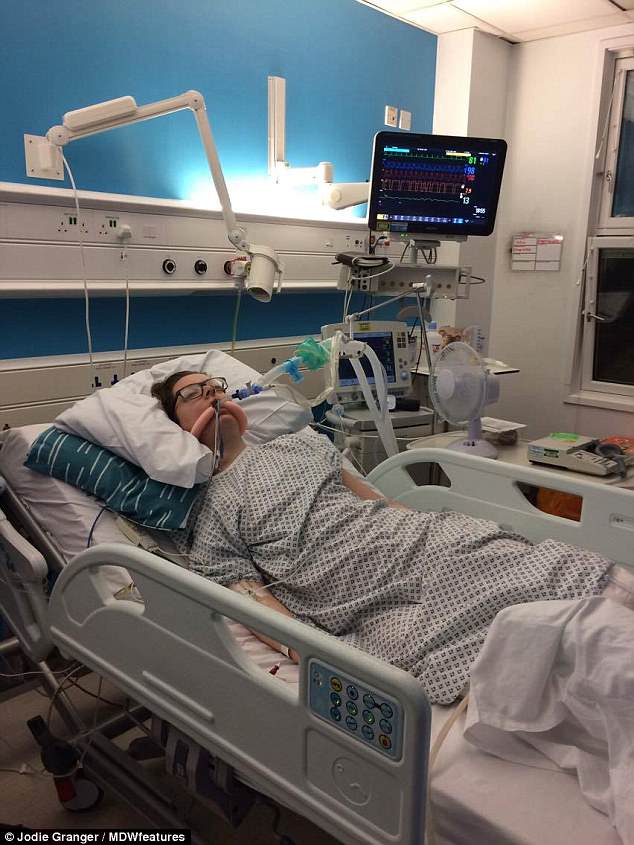 Jodie was unable to control body movement and had to be mechanically ventilated, depending on the nurses care for everything including feeding and hygiene

A year after her diagnosis Jodie is readjusting to life back at Goldsmiths University whilst coming to terms with the physical and mental trauma she has been put through.

Speaking about her journey, she said: ‘I am proud of myself of achieving so much but on another hand I still have a lot of things to deal with mentally and physically.

WHAT IS GUILLAIN-BARRÉ SYNDROME?

Symptoms usually start with a tingling sensation in the leg, which may spread to the arms and upper body.

In severe cases, the person can become paralysed.

The condition can be life-threatening if it affects a person’s breathing, blood pressure or heart rate.

GBS’ cause is unknown, but it usually occurs after a viral infection.

There is no cure.

‘The last year was a struggle in terms of getting back to my student life while coming to terms with the memories, physical and mental trauma I had to deal with, and still feel I am dealing with.

‘I think the most difficult is this aspect of trying to make sense of or understanding this particular trauma. It was luckily not as long as other GBS/CIDP cases, but it was very severe in a short space of time.

‘The experience of not being able to talk or move properly, alongside feeling neuropathic pain, and have all kinds of procedures to go through, whilst trying to stay calm, and live in a hospital, is hard to come to terms with’.

Jodie says that her battle with GBS has brought her closer to her loved ones and she shared her words of support to other sufferers.

Admitting that her friends and family have been amazed by her discovery, and she has grown closer to her parents, she said: ‘I’ve realised how the important the health system is, how it operates, how it needs to be protected and supported in every sense, and unfortunately how pressed people working in the NHS are, but how much they care for their patients.

‘People around you are there to give you so much love, and will do anything to alleviate even the smallest amounts of discomfort, some of the smallest things make the biggest difference.’ 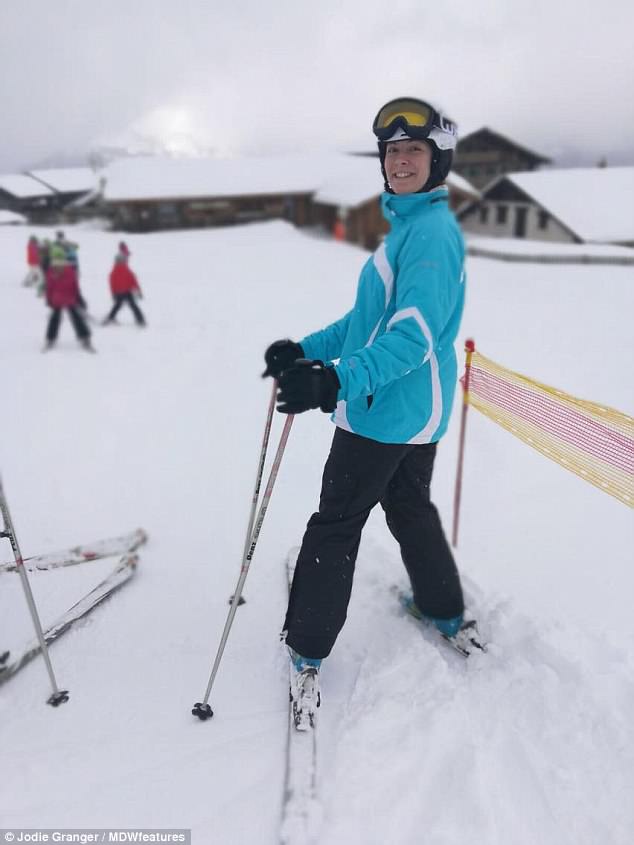 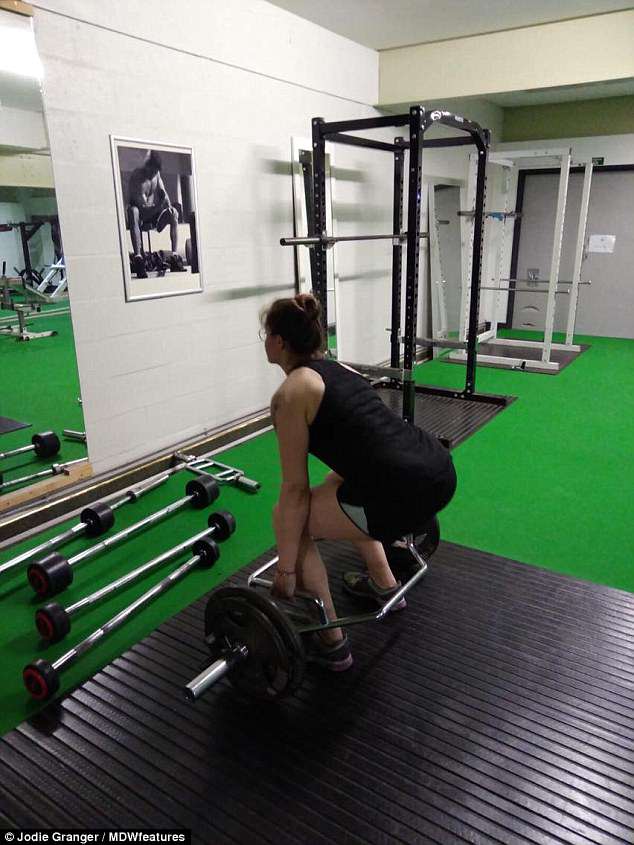 A year after her diagnosis Jodie is readjusting to life back at Goldsmiths University whilst coming to terms with the physical and mental trauma she has been put through, and she now lifts weights as heavy as 75kg