A student has revealed she refuses to date becase she doesn’t want to be branded a catfish due to the amount of make-up she wears to conceal her cystic acne.

Abigail Collins, 19, from Glasgow, spends up to two hours every morning applying concealer and foundation to cover her blemished skin, which she has battled with since the age of 10.

But after years of covering it up, she said going to university has helped give her the confidence to leave the house without make-up – but she still steers clear of men.

‘I’ve struggled to get into relationships as I was so self-conscious about my skin and how it looked, especially to someone romantically, so I tried, and still do, to avoid this,’ she explained. 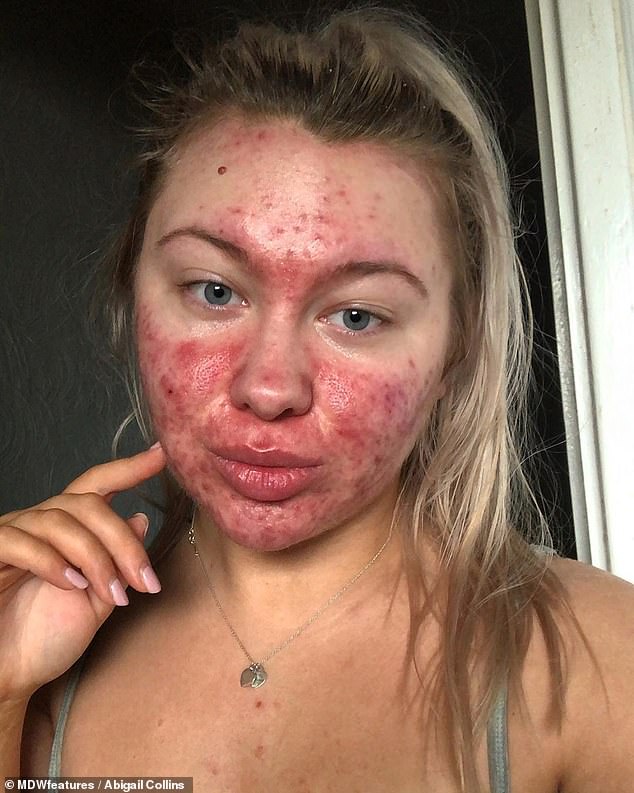 Abigail Collins, 19, from Glasgow, has revealed she refuses to date becase she doesn’t want to be branded a catfish due to the amount of make-up she wears to conceal her cystic acne 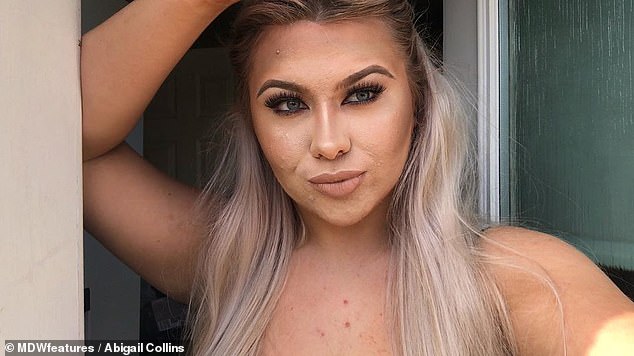 ‘I don’t date purely because I don’t want anyone to think I’m a catfish or that I’m not being honest about the way I look. It’s so difficult to understand and see how another person interprets you.’

The sales advisor and criminology student began noticing breakouts on her face as she reached puberty. They became more frequent, and by 2014 Abigail was dealing with severe cystic acne.

‘About five years ago it really peaked, and my skin was the worst it’s ever been,’ she explained.

‘I had constant breakouts and a new spot every day, leaving me with bad scarring now.’

Abigail was often late for school as she’d spend up to two hours doing her make-up, doing her best to cover it up. 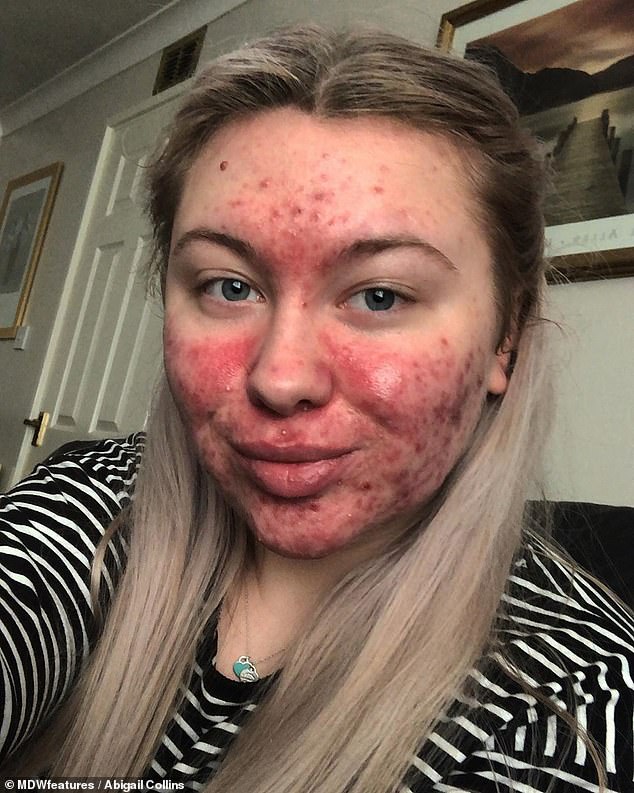 After years of covering up her acne, Abigail claims going to university has helped give her the confidence to leave the house without make-up

She admitted to feeling like the ‘elephant in the room’ as no one else she knew had a medical condition, and she struggled to make friends as her self-confidence hit rock bottom.

‘Growing up it was very difficult to accept my skin and do normal teenage things,’ she said.

‘I felt like I had to wear make-up every day for school and I was often late because I had to make sure everything was covered, so it would take me one or two hours to get ready.

‘In school I felt as if nobody wanted to associate themselves with me because of the way I looked, which meant I had very few friends and a poor social life at this point in my life. 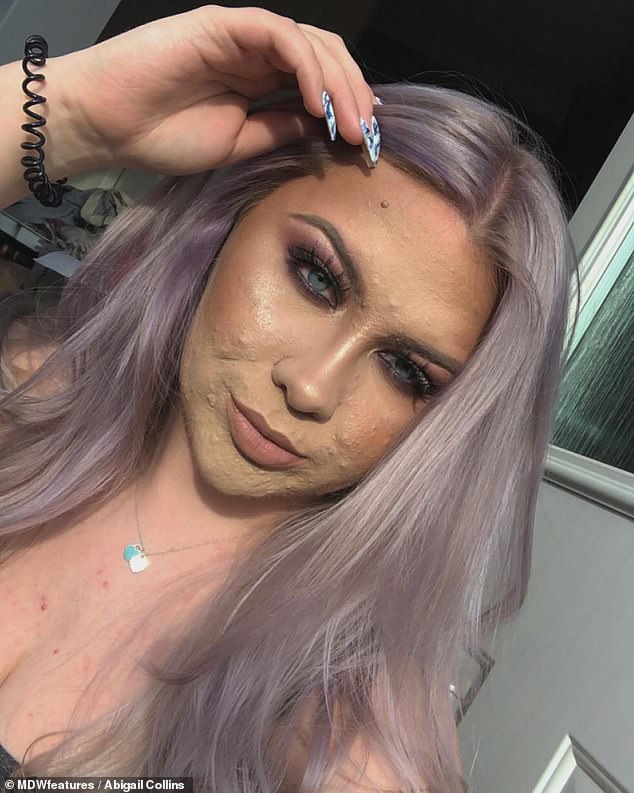 Abigail found she had less time to spend doing her make-up as a student, but as she got into her second year she started to feel that no one really cared about how she looked

‘I tried to avoid school sometimes as I felt ugly and like the elephant in the room, which took its toll on me socially as I struggled to make friends since I wasn’t always there. Even now I struggle to make friends as I’m self-conscious over the way they see me.’

Abigail told how she endured years of cruel taunts, negative comments and frequent staring due to the severity of her skin condition.

‘I was bullied for years about my skin and the way I looked,’ she admitted.

‘My friends sometimes had negative things to say and would use my skin against me, which has left me with major trust issues when it comes to meeting new people. 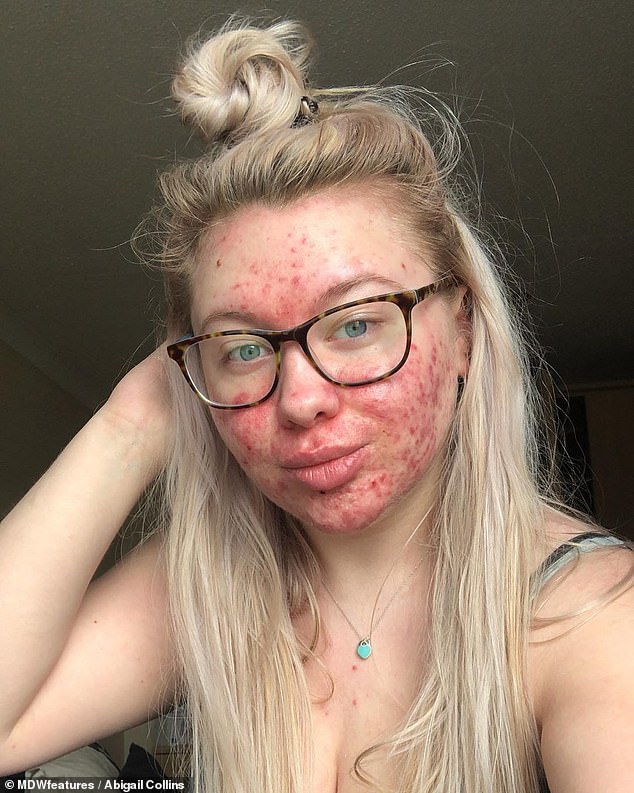 Abigail told how she endured years of cruel taunts, negative comments and frequent staring due to the severity of her skin condition 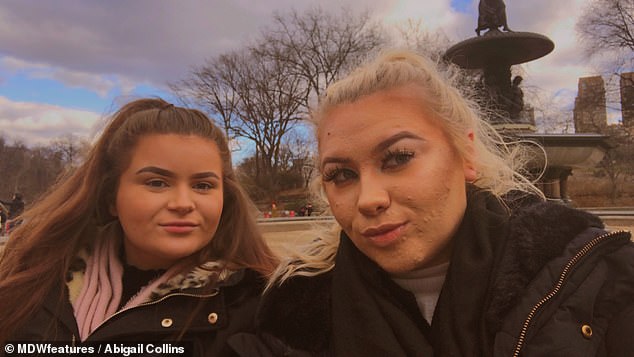 Pictured with a friend, Abigail admitted she tried to avoid school sometimes as she felt ugly and like the ‘elephant in the room’

‘I have a few close friends from school who support me unconditionally and help me in any way they can, but I still often feel alone as I don’t know anybody first hand who has similar experiences to me or who looks like me. This made my self-acceptance difficult.’

Abigail also avoided dating because she didn’t want people to think she was hiding her true appearance.

The student tried a few acne remedies, but nothing really helped to heal her skin, so she continued to cover it with make-up regularly.

Abigail currently uses a gel called Treclin, which is a form of Accutane, to help with her acne. 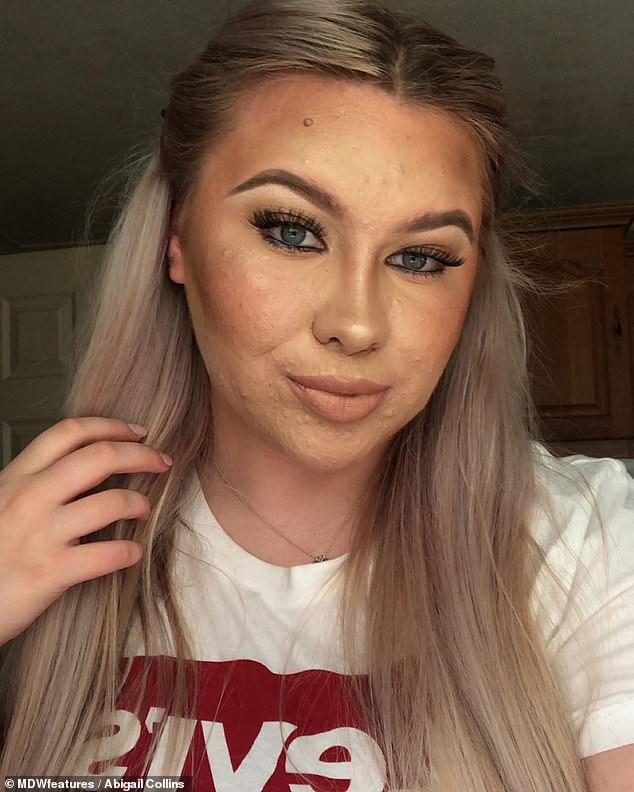 She found the prospect of moving to the University of West of Scotland incredibly nervewracking and initially she skipped lectures because she was too scared to leave the house.

‘I was scared I would get a bad reaction from people I would be living with,’ she admitted.

Abigail found she had less time to spend doing her make-up, but as she got into her second year she started to feel that no one really cared about how she looked.

Gradually she began leaving the house au naturel – and now it’s rare for her to wear any products at all to uni as she prefers to save it for going out. 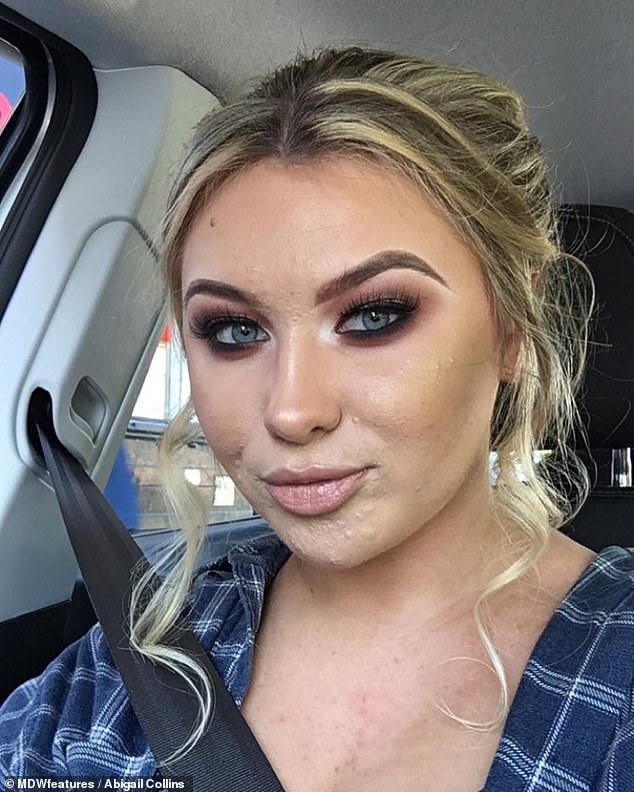 She explained: ‘I realised that none of the people around me noticed my skin to a great extent. Also, being a student doesn’t leave you with a huge amount of time to get ready in the mornings either, so I made myself skip make-up some mornings and then it became more frequent.

‘Now, it’s rare I wear any to university. If I’m going out somewhere nice with friends or family, then I will wear make-up, but if it’s just to do something casual like going to the supermarket, then I will skip it.’

Abigail began sharing her journey on Instagram and connected with other acne sufferers going through the same thing. 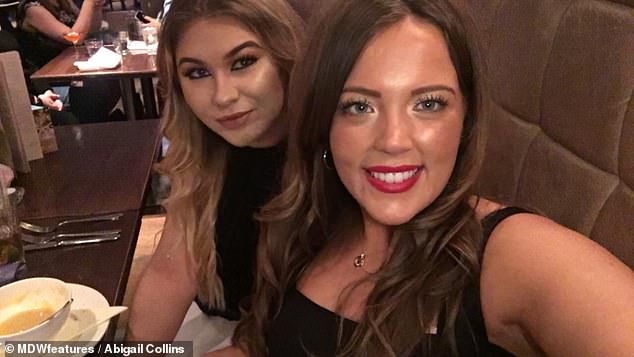 Abigail, pictured with a friend, wants to show other acne sufferers that their blemishes don’t define them and they aren’t alone

After years of feeling ugly and unworthy due to her blemished skin, Abigail is now keen to show others that acne doesn’t define them and that they aren’t alone, as she once believed.

‘Going out bare-faced doesn’t bother me too much anymore,’ she said.

‘For the most part, I can decide if I want to go somewhere and just go without having to do my make-up and cover my back with my hair. 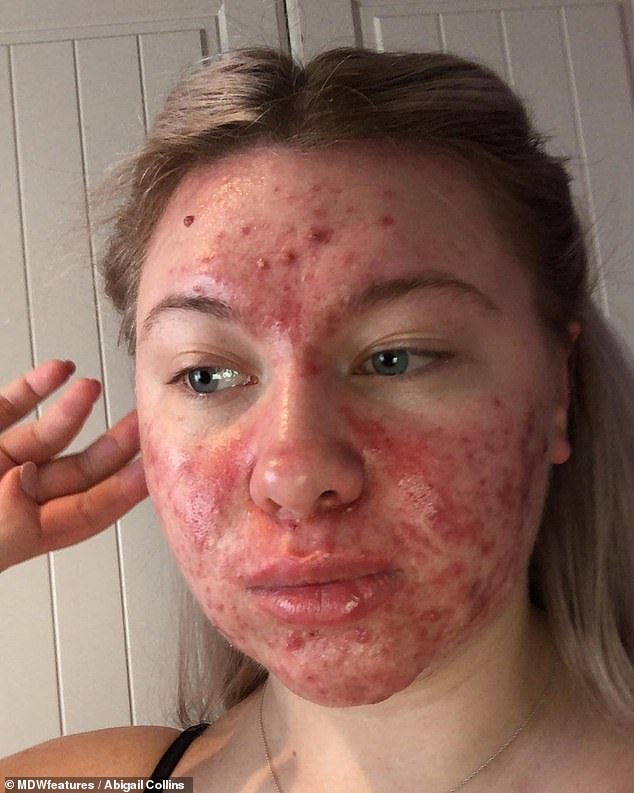 ‘Instagram has helped me so much as I’ve seen so many other people who look like me and made me feel less alone. It’s nice to be able to chat to people about how I’m feeling or how our skin is doing that day, which is something you can’t discuss with most people.

‘I hope to show others that acne doesn’t define you and that you’re never as alone as you feel. There are always people out there who can relate and understand what you are going through and can support you.’