World’s hottest grandmother, 47, shares the daily diet that saw her lose 15kg, the ONE popular drink she doesn’t touch and why she’s removing her breast implants

A grandmother who stunned thousands of people with her age-defying looks has revealed the daily diet that saw her lose 15kg.

Blonde bombshell Gina Stewart, who hails from the Gold Coast, came in at 12th place after she was in the running for the coveted Miss Maxim Australia 2018.

And with her glowing complexion and incredibly youthful appearance, the mother-of-four, 47, knows all too well when it comes to keeping herself fit, healthy and looking good.

‘Being a grandma doesn’t mean you have to wear the floral granny undies, I’m not hanging up my sexy lingerie just yet,’ she told Daily Mail Australia.

Here, the stunning model shared beauty secrets, including her average day on a plate, the drinks she avoids to stay in shape, and why she vows to remove her breast implants. 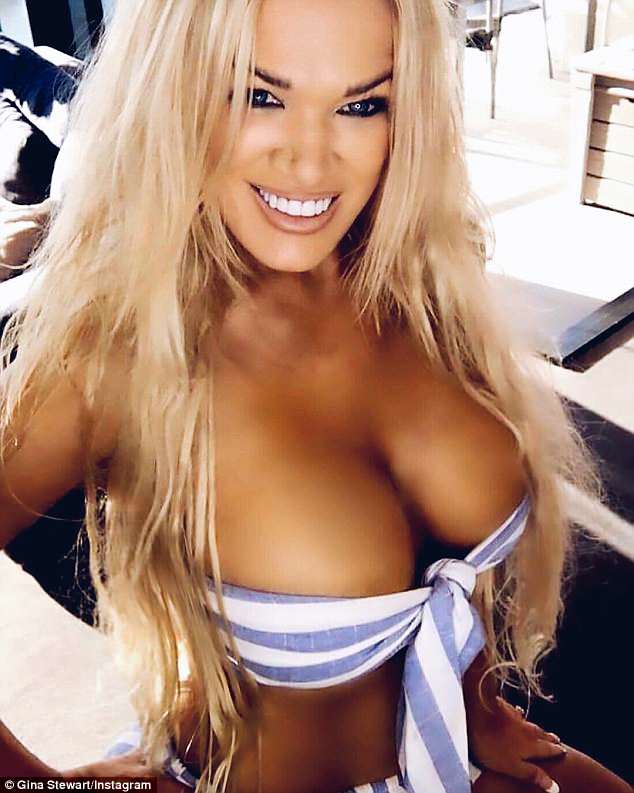 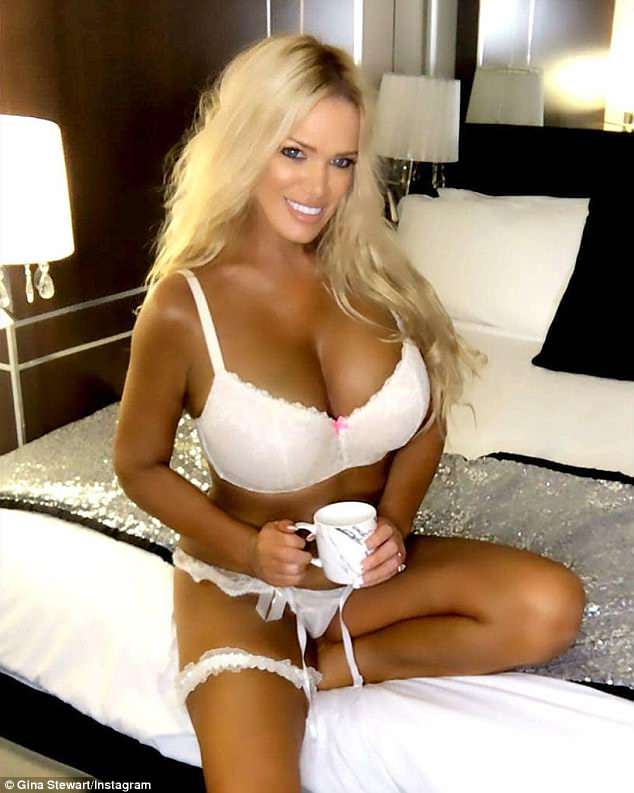 Gina’s day on a plate

For breakfast, Gina usually eats eggs to kickstart her mornings. She then enjoys rye cracker, cottage cheese and avocado for lunch.

And for dinner, she eats either chicken, fish or turkey mince with salad or beans, broccoli and sweet potato.

‘I’ve only been eating these foods for the past year or so and have shed 15kg with light exercise,’ she told Daily Mail Australia.

‘When I was younger, I could eat as much as I wanted and never gained a pound. Much harder at this age for sure.

‘I’ve only started eating healthy and I’m more conscious of what chemicals I put into my body the past two years. Massive difference in the way I look and feel.’ 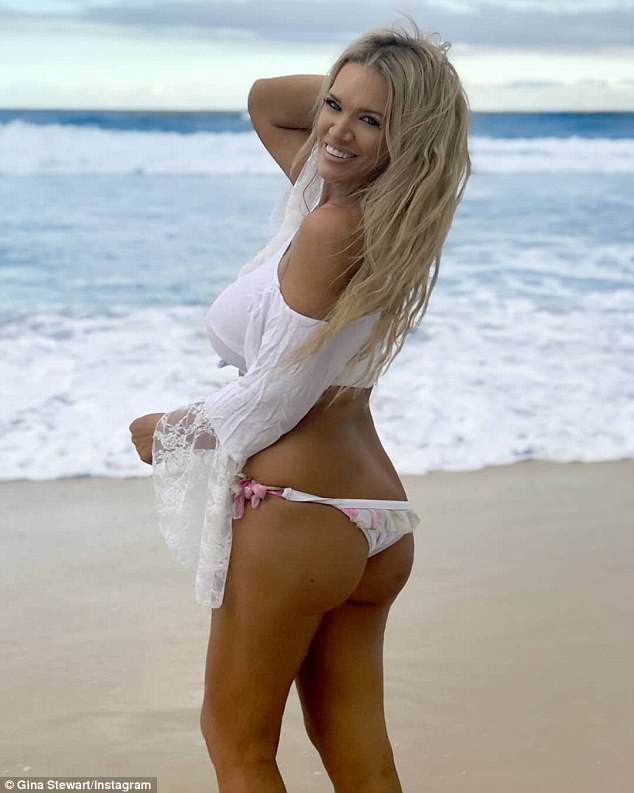 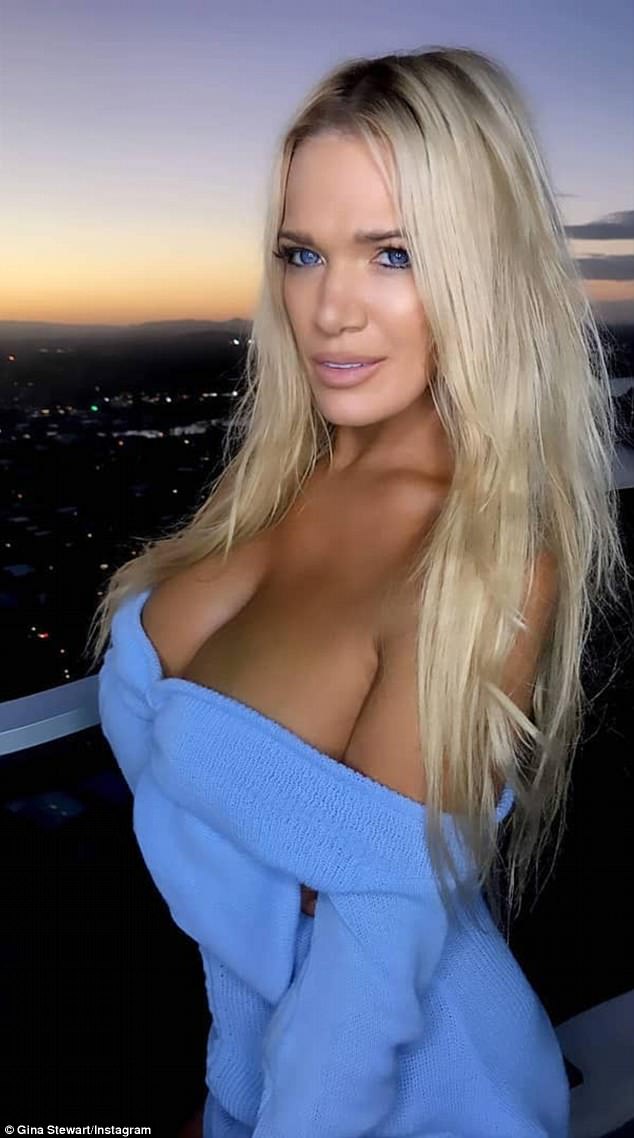 Gina said she’s also working on eliminating plastic from her life and avoiding all things chemical, including plastic water bottles

‘I have a small piece of chocolate everyday. Chocolate is my weakness. I eat sugar-free chocolate but it tastes like there’s a mountain of sugar in it,’ she said.

‘I don’t really have that many guilty pleasures but I do indulge when I feel like it.’

Gina said she’s also working on eliminating plastic from her life and avoiding all things chemical, including plastic water bottles. 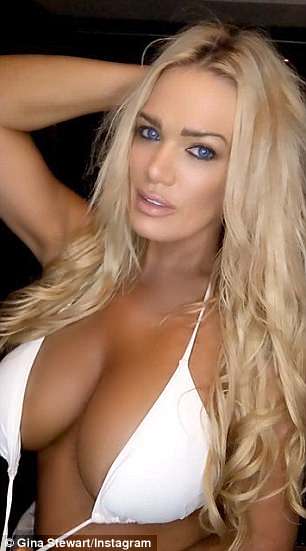 ‘There’s chemicals in the plastic that leak into your body and have an ongoing effect on your hormones, that’s why so many young couples struggle to fall pregnant naturally,’ she said.

‘My father died young at 59 from a heart attack so I’m just trying to stay as healthy as I can so I can be around a lot longer for my children and grandchildren.

‘Last year, my mother was diagnosed with cancer. I got her into all the natural alternatives and to the surgeons surprise, it had started to reverse.

‘My friends are all saying I look the best I’ve ever looked in years. I must admit I never looked after myself but that’s because I didn’t have the knowledge I have today.

‘I have a long way to go to eliminate more chemicals out of my life but so far, the difference has been so rewarding.

‘I’ve had my breast implants for 10 years now as they were a trend at the time.

‘As I’ve gotten older, I’ve realised my health is more important that the size of my breasts. I’m planning to remove the implants in the near future.’ 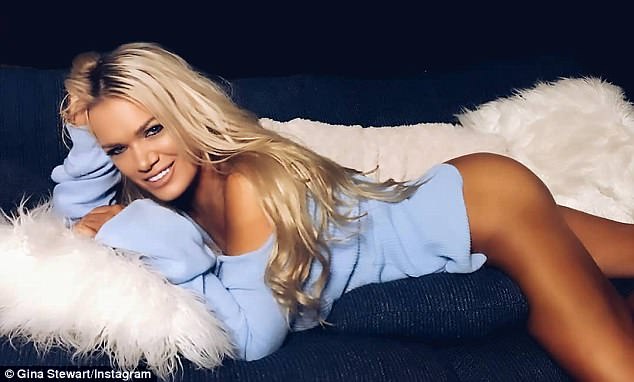 Despite getting teeth veneers and breast implants, Gina said she’s looking at ways to avoid chemicals so she could lead a healthy life 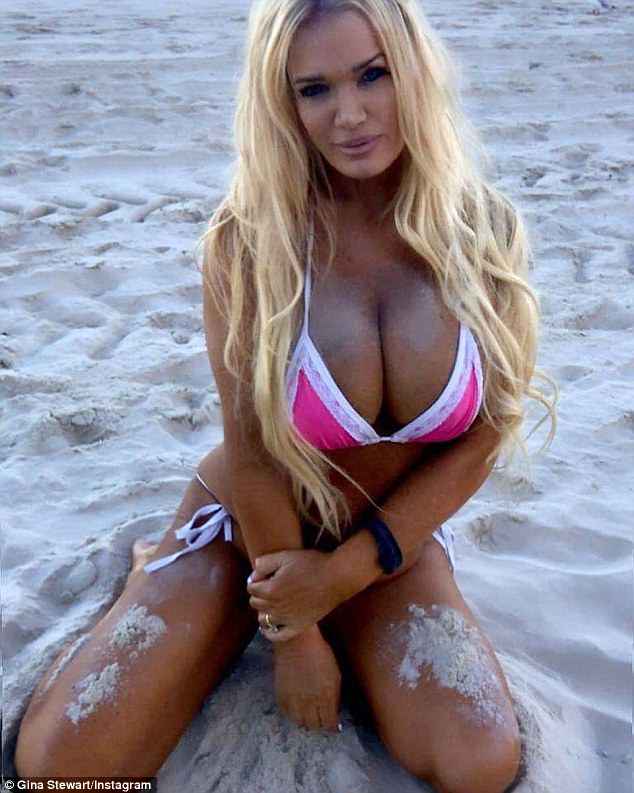 She said she turned to breast implants after struggling with her insecurities.

‘If I’d known the chemicals in them could affect our health, I never would have gone ahead with the surgery. At the time, I was lead to believe they were safe,’ she said.

‘I went ahead with the surgery to help my confidence, I was bullied for years about the size of my breasts when I was younger.

‘I thought if I had it done, my life would change. To be honest, it never changed, I was judged more. I look in the mirror and see so many faults but I’m trying not to focus on that and just be grateful that I’m still breathing on this beautiful planet.

‘I don’t care what anyone says about me anymore. We are all unique and nobody is perfect. I’m learning the most attractive part about ourselves is confidence with no age barrier.’

Gina also admitted to getting veneers so she could have that ‘perfect smile’.

‘Unfortunately I had my teeth veneered before I knew all about the harmful chemicals and cannot reverse this,’ she said.

‘Had I had more knowledge about the chemicals they used, I wouldn’t have had that procedure done either.

‘Knowledge is power and I absolutely wished I had done more homework.’

‘My mother told me from a young age not to drink it because it’s bad for you. It’s strange but it’s true – I’ve never drunk coffee my entire life,’ she said.

‘Coffee has been proven to dry out your skin. Coffee messes with your stress hormone which controls your skins oil production apparently. Hydration is key.’ 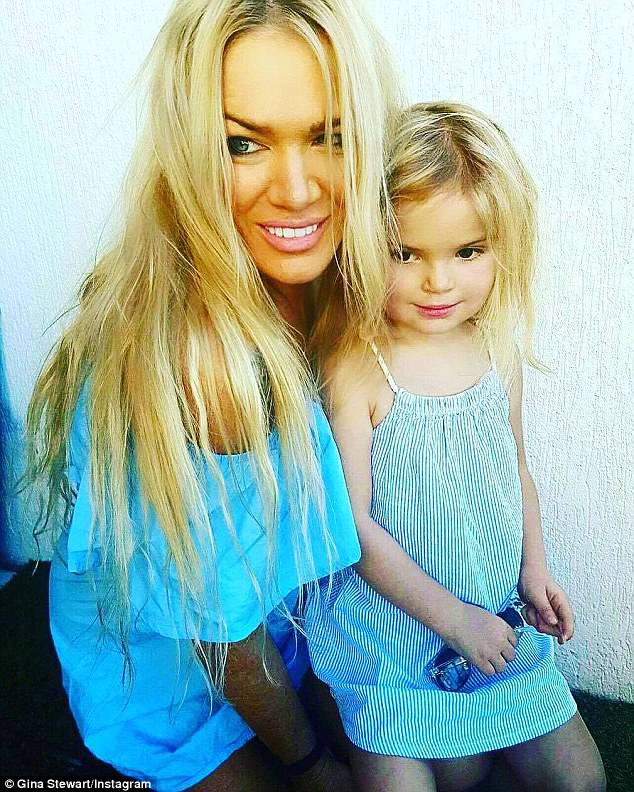 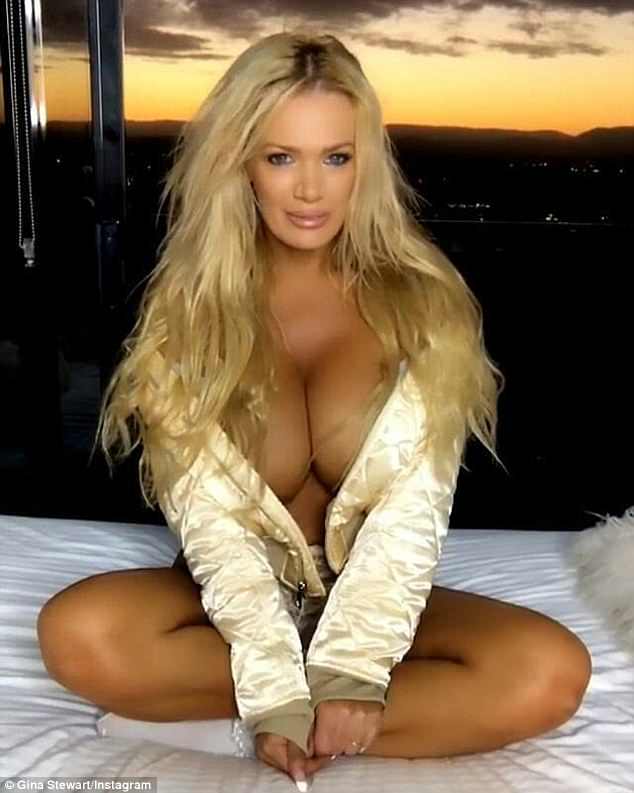 Besides leading a caffeine-free lifestyle, Gina said she gave up alcohol two years ago

Besides leading a caffeine-free lifestyle, Gina said she gave up alcohol two years ago.

‘I haven’t touched it in two years because I get drunk far too quickly and I’m sure it’s what contributed to my father’s early death,’ she said.

‘I used to enjoy a glass with dinner but found I had a hangover every morning.

‘Some might say what a boring life I must have with no alcohol or coffee and eating healthy – and that’s fine. I don’t judge others by their lifestyle but for me, it’s essential to look after myself as my youngest child is four years old.’

She hopes by sharing her story, she helps women make better choices when it comes to plastic surgery.

‘My only influence is to try to help woman make better choices of the reasons they are choosing surgery,’ she said.

For women who are keen to lead a healthier life, Gina said it’s never too late.

‘It’s never too late to change your lifestyle at whatever age. Your body and health is all you have at the end of the day so you have to respect it,’ she said.

‘Unfortunately, this world is judged on our appearance so just try to be the best version of yourself.

‘Never listen to the negative comments, nobody’s perfect. Life is too short to worry about what other people think. There’s no rules about the way we should look.

‘Be true to yourself and never change because your age or society says so. As long as you’re having fun and you’re not hurting anyone, that’s all that matters.

‘I’ve been to hell and back a few times in my life but I’ve learned from it all and I just want to help others.’ 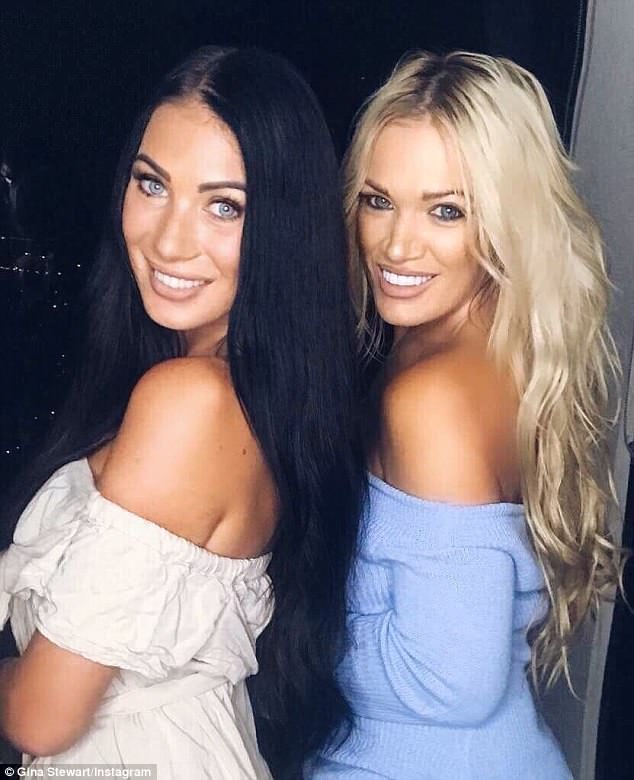 Gina is a single mother to four children, including her 25-year-old daughter Casey (pictured) 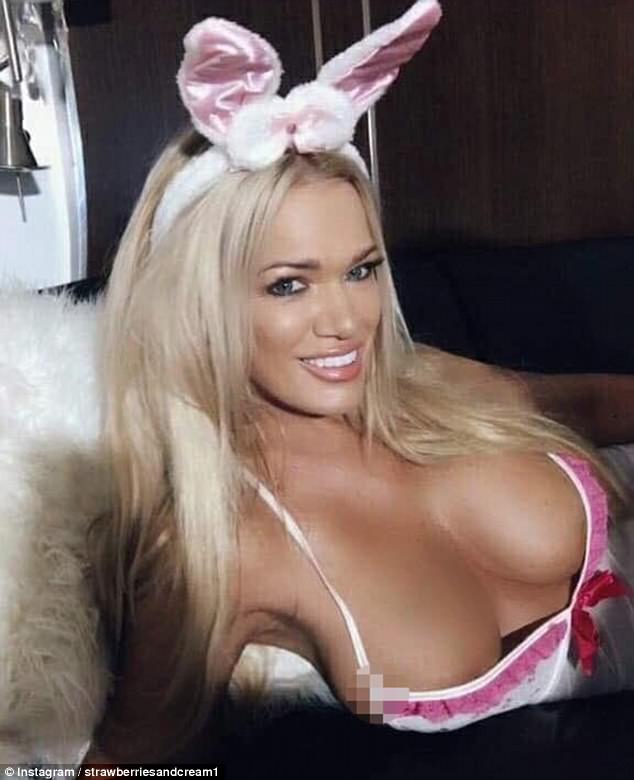 The grandmother, from the Gold Coast, has stunned people with her age-defying looks

Gina is a single mother to four children – James, 27, Casey, 25, Cody, 22, and four-year-old daughter Summer. She also has a 10-month-old granddaughter.

She previously revealed she only drinks BPA-free water.

‘I also drink alkaline water only, it’s got lots of minerals in it as well,’ she admitted.

Her beauty regime is very simple with the age-defying grandmother only using two products to keep her skin smooth and clear.

‘Macro Organics coconut oil is my hair product, my product that I cook with and my moisturiser – $5, all organic, no chemicals,’ she said.

‘Rosehip oil is also my secret weapon, I swear by this, this is anti-ageing. So basically what I do is I cleanse and I put this on my face afterwards – that’s my daily routine.’ 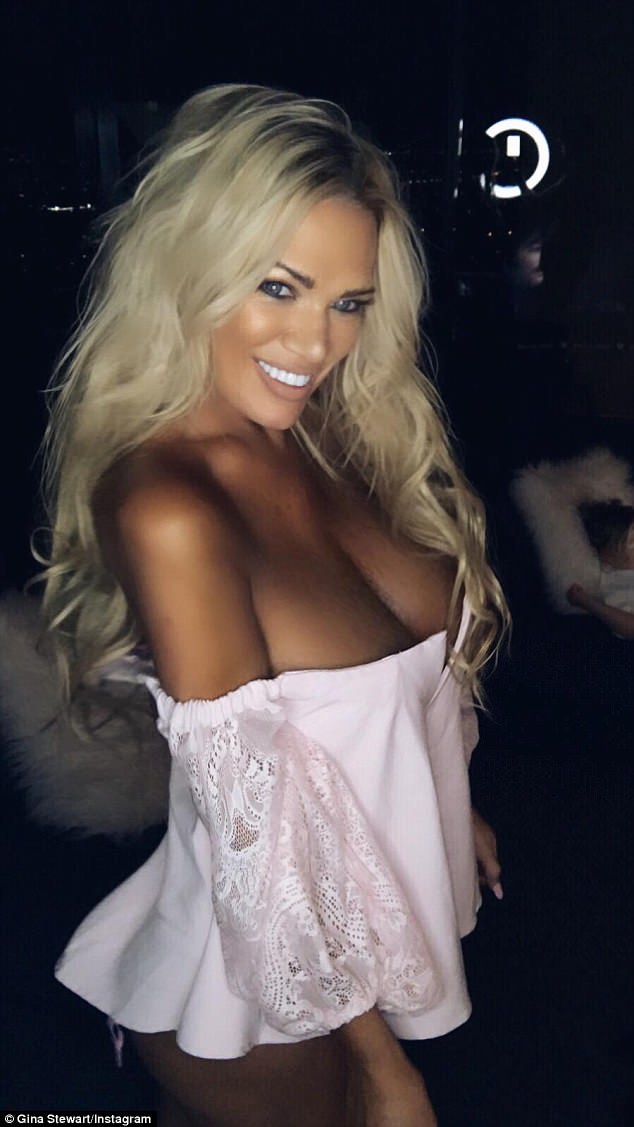 With her incredibly youthful visage, you would be surprised to find out how old she really is

Previously speaking to Daily Mail Australia, the youthful grandmother opened up about the only procedure she’s had work on.

‘The only cosmetic procedure I had was my breasts 10 years ago. I don’t use Botox or fillers as I believe in ageing gracefully,’ she told Daily Mail Australia.

‘But seriously, there’s no secret. I think everyone is beautiful. I’m not doing this for attention as I hate it. I’m just trying to make a difference to inspire women not to rip each other apart.’

The blonde beauty said she hopes to win the competition so she could donate the $10,000 prize money to her friend who recently had a stroke.

‘I’m only hoping to win to help my best friend of 30 years as she’s had a stroke. If I win Maxim, I would be donating to her to help with her recovery,’ she said. 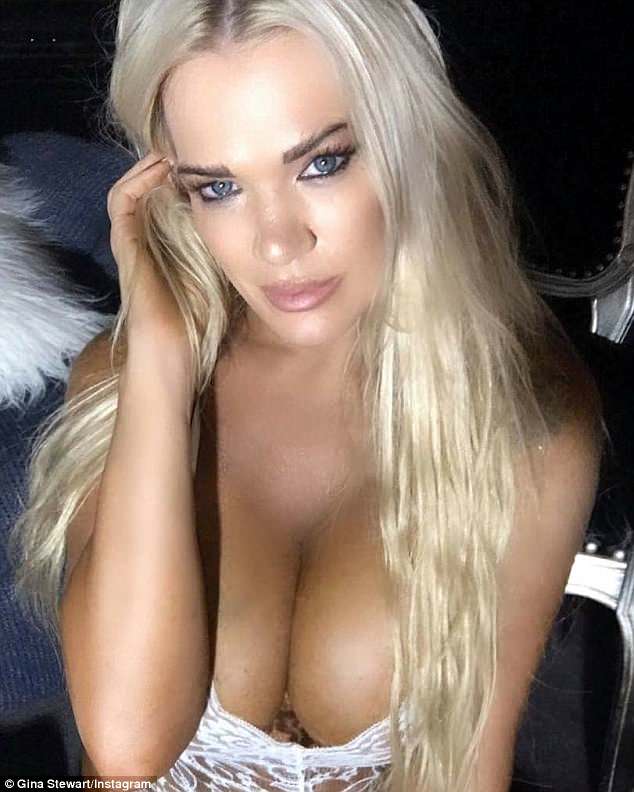