Business managers are picking up the pieces after rioters in Minneapolis, Minnesota, took to the streets overnight – looting a Target and setting an AutoZone on fire – while protesting the police-involved death of George Floyd.

Rioters set fire to a number of small businesses and chain stores, including a nearby AutoZone, where photographs show rioters surrounding the building as flames grow from within.

“These are a series of disturbing and tragic events,” AutoZone spokesperson David McKinney told FOX Business on Thursday. “Fortunately, no customers or AutoZoners were harmed as a result of the fires in Minneapolis.”

Pockets of looting were reported Thursday at stores where windows and doors were smashed. KSTP-TV reported some fires at businesses continued to burn with no firefighters on scene. A liquor store employee displayed a gun as he stood among the debris of broken bottles and beer cans inside the business.

Looters also descended upon a local Target store, smashing windows, dismantling equipment and taking what they could from inside. They were seen carrying merchandise from the store with no interference by police.

Target is headquartered in Minneapolis, but was uninvolved in the death of 46-year-old Floyd.

Danielle Schumann, a spokesperson for Target, told FOX Business the company is “heartbroken by the death of George Floyd and the pain it is causing our community.”

“We decided to close our Lake Street store earlier today and worked to ensure all of our team members were accounted for and safe,” Schumann said in an emailed statement. “Our focus will remain on our team members’ safety and helping our community heal. Until further notice, our store will remain closed.” 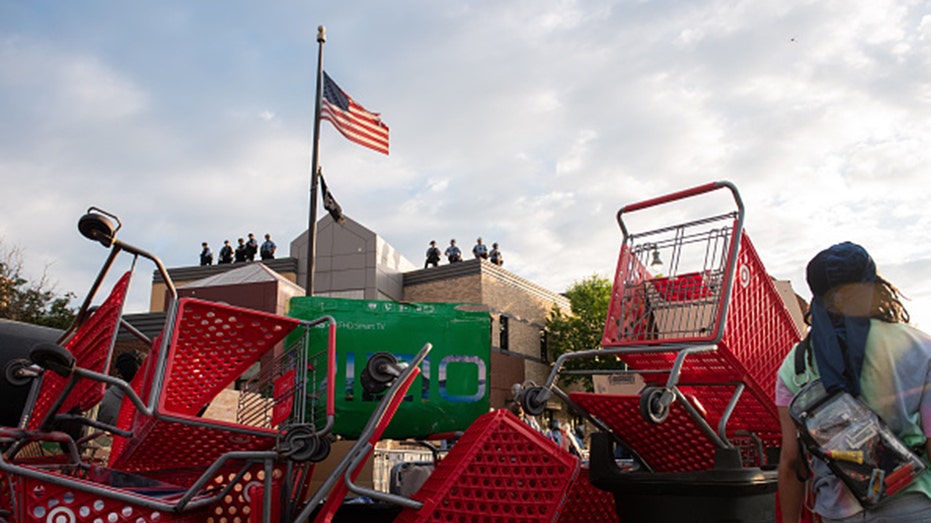 Protestors build a barricade of carts from Target in front of the 3rd police precinct on May 27, 2020, during the second day of protests over the death of George Floyd in Minneapolis. (Photo by Steel Brooks/Anadolu Agency via Getty Images)

Video of the store’s interior showed empty clothing racks and shelves and debris strewn about. Obscenities were spray-painted on the exterior of the store.

Amid the violence, a man was found fatally shot Wednesday night near a pawn shop. Asked to confirm reports that he had been shot by a store owner, police spokesman John Elder said that was "one of the theories.”

Protesters began gathering in the early afternoon Wednesday near the city's 3rd Precinct station, in the southern part of the city where Floyd died on Memorial Day after an officer knelt on his neck until he became unresponsive. Protesters also skirmished with officers, who fired rubber bullets and tear gas. 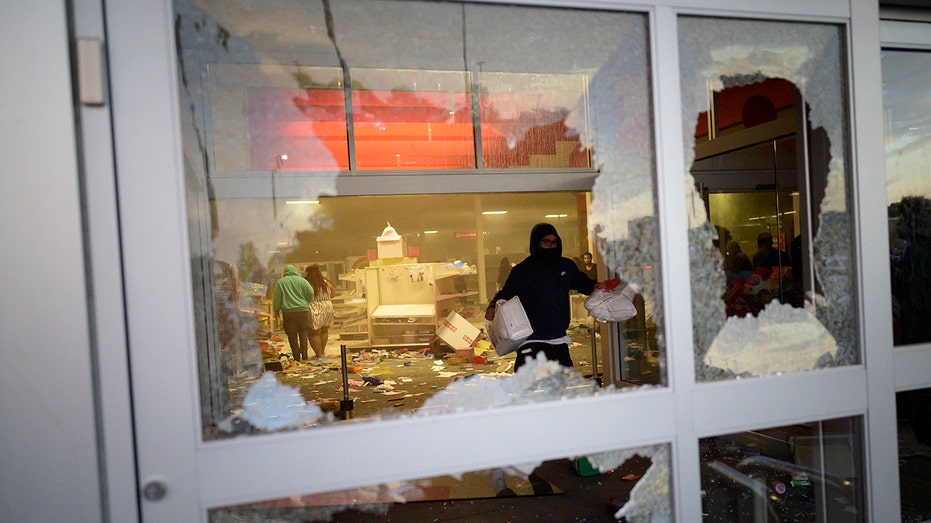 People break into a Target store, while protesters hold a rally for George Floyd in Minneapolis on Wednesday, May 27, 2020. (Aaron Lavinsky/Star Tribune via AP)

It was a second and much more violent night in Minneapolis since the death of Floyd, whom police were seeking to arrest outside a Minneapolis grocery store on a report of a counterfeit bill being passed. A bystander's cellphone video showed an officer kneeling on Floyd 's neck for almost eight minutes as he eventually became unresponsive.

The U.S. Attorney’s Office and the FBI in Minneapolis said Thursday they were conducting “a robust criminal investigation” into Floyd's death and was making the case a priority. The FBI had already announced it was investigating whether Floyd's civil rights were violated. The new announcement came a day after President Trump tweeted that he had asked an investigation to be expedited.

"At my request, the FBI and the Department of Justice are already well into an investigation as to the very sad and tragic death in Minnesota of George Floyd," Trump tweeted Wednesday. "I have asked for this investigation to be expedited and greatly appreciate all of the work done by local law enforcement. My heart goes out to George’s family and friends. Justice will be served!"

The officer and three others were fired Tuesday, and on Wednesday, Frey called for him to be criminally charged.

Meanwhile, Mayor Jacob Frey pleaded with people of the city for their help “in keeping the peace.”

Walz also tweeted about the riot late Wednesday, saying it has “evolved into an extremely dangerous situation.”