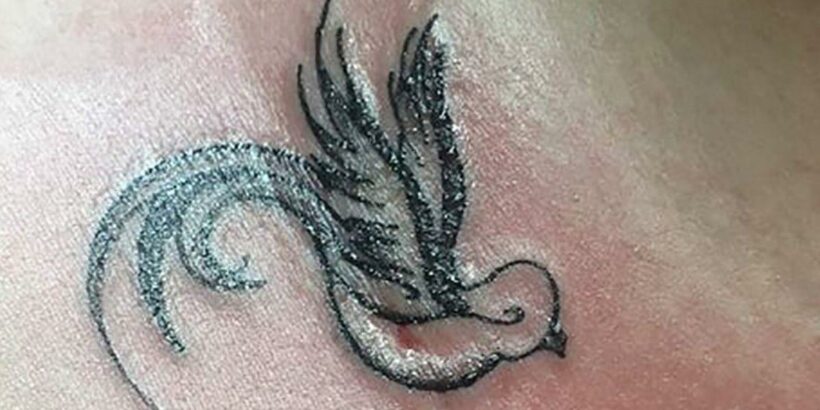 A woman who got a tattoo for the first time was horrified when her pal pointed out the inking was grammatically incorrect as the artist made a spelling error.

The mistake was shared on Reddit after the woman’s mate pointed out what had gone wrong, reports the Mirror.

The design features a bird accompanied by a phrase underneath.

Writing “to” – a preposition that can indicate a direction of movement or place of arrival – should have been “too” which is a synonym for “besides”, “also” or “as well”.

The phrase is a commonly uttered idiom which reassures people that bad times will one day be in the past encouraging them to push through and carry on.

So, it’s slightly ironic that the tattoo newbie was now having to deal with the misspelling.

The woman’s mate posted a snap of the fresh inking on Reddit and said: “My friend just got her first tattoo.”

One jokester said: “The artist also did his first tattoo.”

“I would simply be: upset,” added another.

While a third wrote: “Never mind the fact that the "too" is missing an "o", that handwriting is atrocious.”

And, someone else savagely said: “The bird is not great either.”

To which another replied saying it looked like a “d*** with wings”. Ouch!

Sadly, a professional pointed out that the wording would likely “blow out” due to the artists heavy hand.

He said: “This tattoo is gonna be REEEEALLY blown out when it heals. Yikes.

“Basically, when a tattoo artists digs in too deep with a needle, ink gets further into the tissue than it should (down into the hypodermis where your veins and stuff are).

Hopefully, that means the spelling error won’t be so obvious!