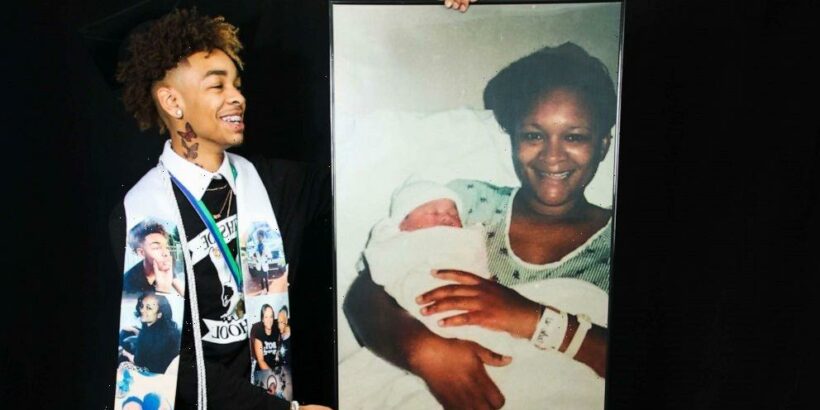 A Georgia teen honored his late mother through a graduation photoshoot.

KJ Morgan’s mother Teresa Colbert died from cancer on May 19, 2019, near the end of his freshman year at Northside High School. In preparation for his graduation this May, Morgan, 17, did a photoshoot with his mom’s portrait and wore a custom stole with photos of her on it.

Morgan was supposed to graduate in May 2022, he said, but his mom’s death pushed him to work harder and graduate a year early.

“She was already not here,” he said. “So I was like, ‘Why don’t you just graduate early and make it 10 times more better?'”

In order to accomplish that, Morgan said he took college classes at Central Georgia Technical College in addition to his regular high school course load.

“From January to May, I took eight classes and for the summer semester I had five classes,” he said.

Morgan’s early graduation was even more special to him he said, because he had to miss class to take care of his mom.

“I missed so many school days taking care of my mom,” he said. “So my ninth grade year, I was failing classes back to back yet I still managed to graduate a whole year early. It just put the cherry on top for me. It did it for me to know that my mom wouldn’t be disappointed in me. … I just wanted to make her proud and this was my way of making her proud.”

In an emotional post on social media, Morgan shared his list of accomplishments over the past year and credits it all to his mom.

“She was my bestfriend. My hype man. My partner and crime. My everything,” Morgan wrote in the post of his mom. “Here I am walking the stage without my bestfriend. I’m doing this for you ma.”

His list of accomplishments on the post include graduating a year early while working as a hairdresser; being an honor society member; completing nearly all the requirements for an associate’s degree in early childhood education, which he said he plans to finish up soon; and getting accepted into his top three choices for college — Georgia State, Georgia Southern, and Fort Valley State universities.

Morgan hasn’t committed to any of the three yet, as he said he is still weighing his options for the future. But if he does go to college, his credits will allow him to enter as a sophomore.

“I’m still kind of deciding because I’m not sure what I want to do in life yet,” he said, adding that he’s looking at careers in teaching, cosmetology, and social media. “There’s a lot of things I can be.”

Wherever Morgan goes in life, he plans to keep one of his mom’s lessons close, he said.