Is this the WORST ad ever? Tesco Clubcard’s tongue-in-cheek dubbing over classic film Casablanca branded ‘a complete abomination’ by viewers

An advert that promotes Tesco’s new Clubcard Plus by dubbing over classic film Casablanca has been branded ‘a crime against humanity’ by irritated viewers.

The supermarket giant’s commercial has sparked a social media backlash for offering a tongue-in-cheek re-work of the 1942 wartime movie.

Viewers said they had watched in despair as Humphrey Bogart and Ingrid Bergman’s voices were dubbed over to promote the brand’s new points-based loyalty card. 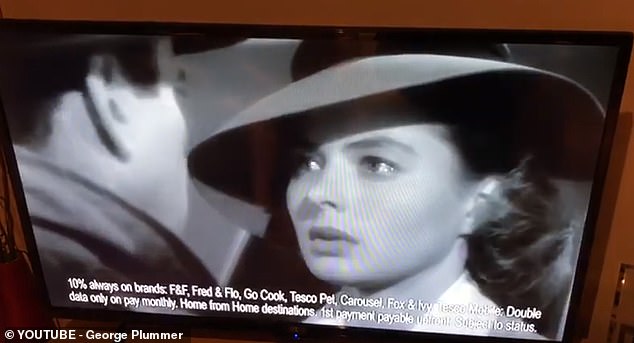 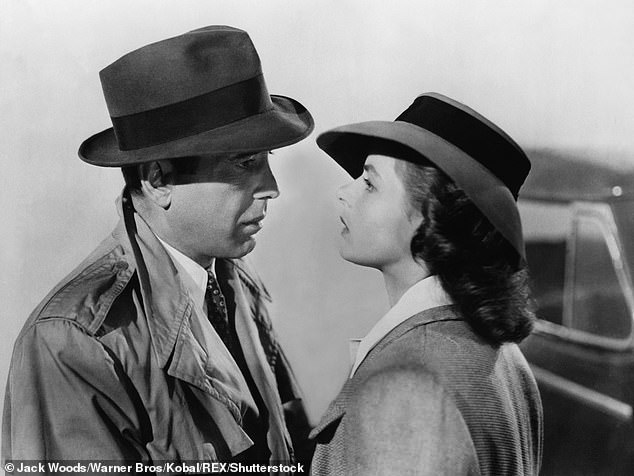 ‘Complete abomination’: Viewers who’ve seen the supermarket goliath’s advert haven’t enjoyed the re-working of a film classic, with one viewer calling the ad ‘a crime against humanity’ 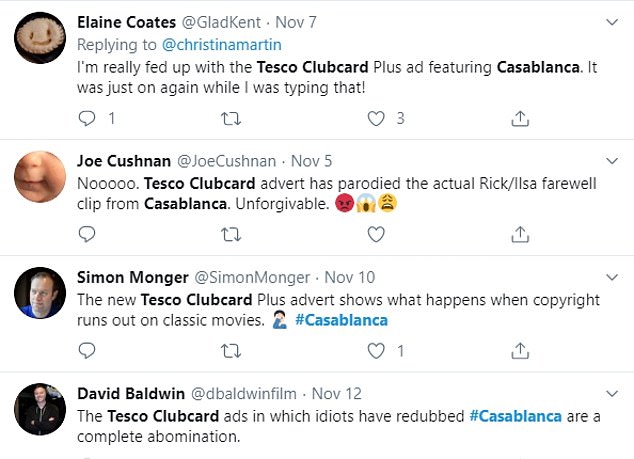 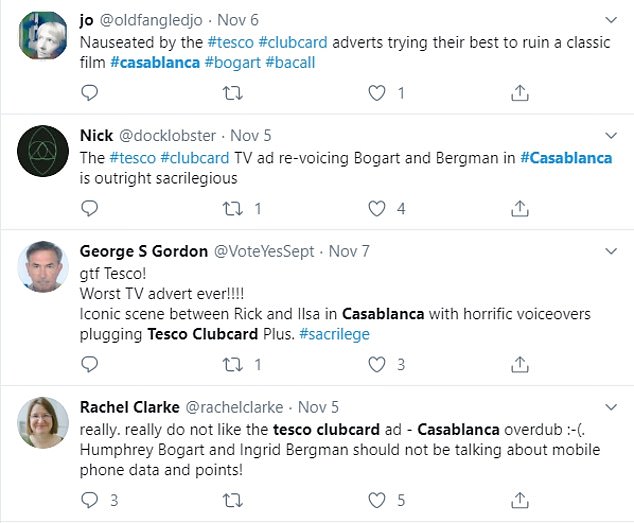 The irritation comes just days after the supermarket made headlines for using Spice Girl Mel B’s photo in an ad campaign.

The star, 44, demanded the supermarket’s CEO call her for using the photo without permission – however, she retracted the comments later, saying there had been ‘a miscommunication’.

There’s apparently no confusion over how those who’ve seen the Casablanca-themed advert feel about it, with many taking to social media to vent.

@ij_ford wrote: ‘Just saw the Tesco clubcard advert where they dub over the finale to one the one of the finest films ever created in Casablanca. Go f*** yourself, Tesco.’

@tonymc39 added: ‘They are using footage from ‘Casablanca’ to advertise Tesco Clubcard… what hell is this?’

@dbaldwinfilm raged: ‘The Tesco Clubcard ads in which idiots have re-dubbed #Casablanca are a complete abomination. 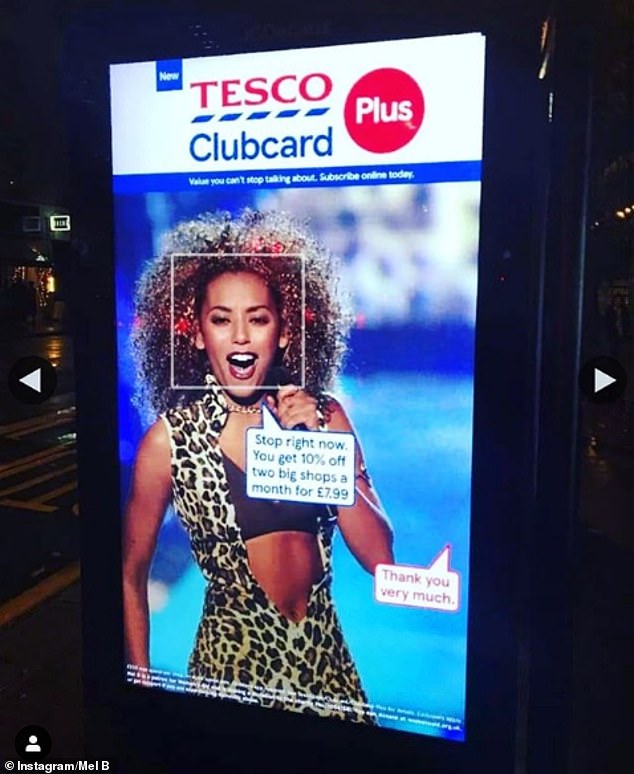 Ad:  The Spice Girl, 44, uploaded a photo of the Tesco ClubCard ad to Instagram on Monday, and urged the CEO of the supermarket to call her 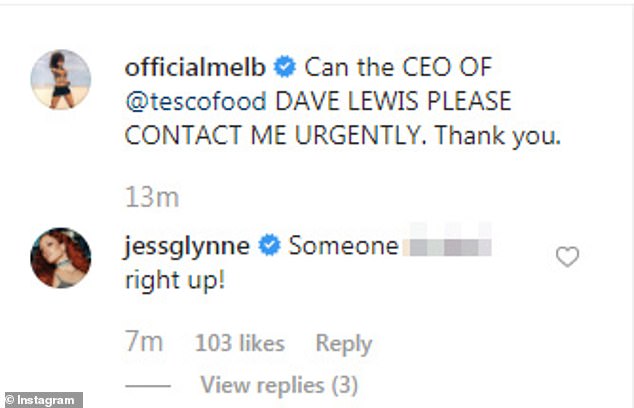 Reaction: Mel demanded a response from Tesco’s CEO Dave Lewis while singer Jess Glynne said someone ‘f****d up’ with the ad 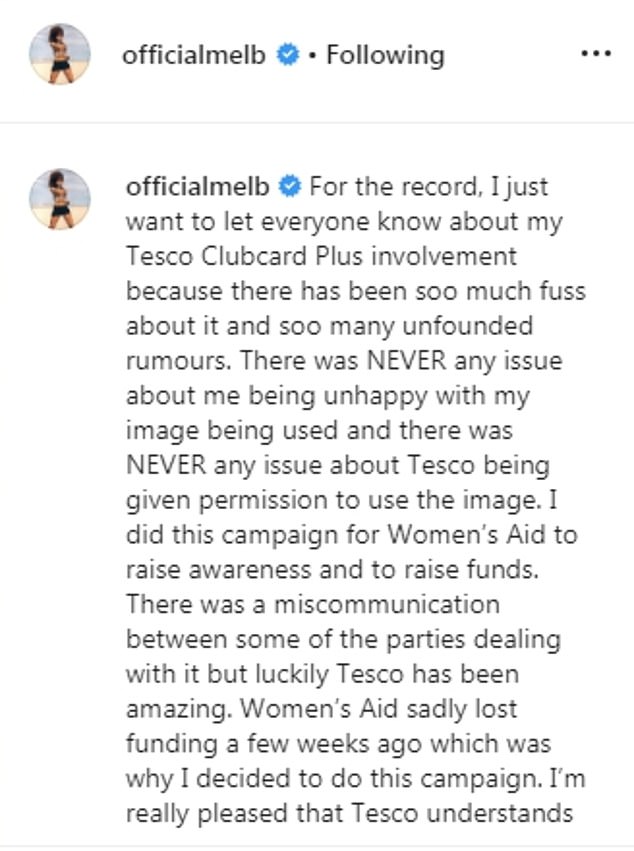 Change: However, just one day later, Wannabe singer Mel denied there was ever any issue with Tesco using her image

It’s been a tough week for the supermarket goliath. On Tuesday, Spice Girl Mel B uploaded a photo of the Tesco ClubCard ad to Instagram, which depicted a younger Mel performing in a leopard print suit with a speech bubble reading: ‘Stop right now. You get 10% off two big shops a month for £7.99’.

The irate star appeared highly dissatisfied with her likesness being used in the advert, writing: ‘Can the CEO OF @tescofood DAVE LEWIS PLEASE CONTACT ME URGENTLY. Thank you’.’

However, just one day later, Wannabe singer Mel denied there was ever any issue with Tesco using her image, confirmed she had given her permission and thanked the supermarket for helping her support domestic violence charity Women’s Aid.

Uploading a photo of the advert once again she wrote: ‘For the record, I just want to let everyone know about my Tesco Clubcard Plus involvement because there has been soo much fuss about it and soo many unfounded rumours.

‘There was a miscommunication between some of the parties dealing with it but luckily Tesco has been amazing. Women’s Aid sadly lost funding a few weeks ago which was why I decided to do this campaign.’