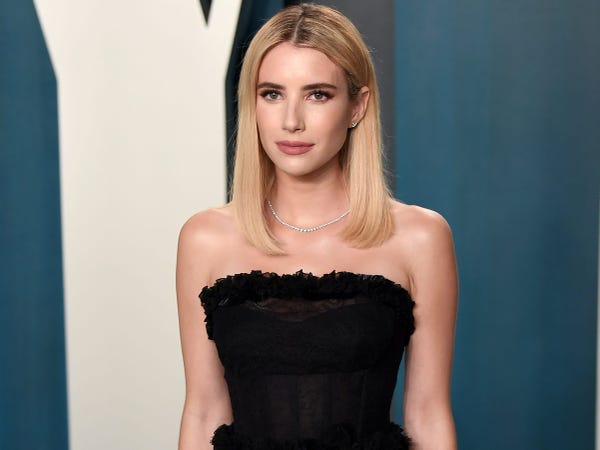 Emma Roberts has some of the best maternity style in Hollywood.

Since announcing in August that she's expecting a child with boyfriend Garrett Hedlund, Roberts has kept her Instagram followers up to date with her latest looks. She's worn chic minidresses, platform heels, and even a swimsuit that showed off her baby bump.

Here are some of the best outfits she's worn so far throughout her pregnancy.

Emma Roberts confirmed her pregnancy in August with a photo of herself wearing a white, polka-dot nap dress. 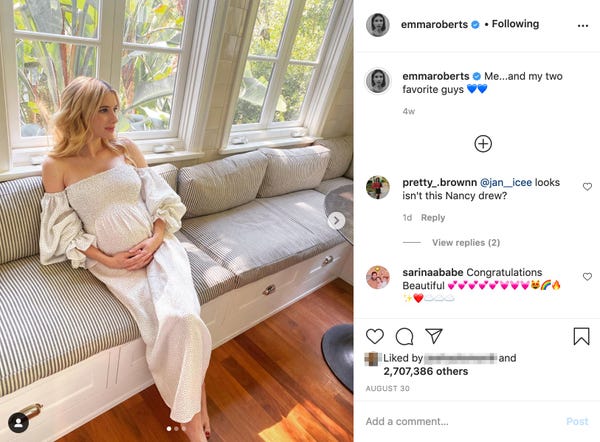 Roberts referenced her boyfriend and unborn child in the caption of her photo, writing: "Me…and my two favorite guys 💙💙."

The Atlanta dress, designed by clothing brand Sleeper, has puffy, off-the-shoulder sleeves and an ankle-length skirt. It's made from 100% linen, and retails for $224 at the time of writing. The dress is also sold in other colorways, including black, tan, and white with pink roses.

The garment could be considered a day gown or nap dress, which combines the leisure of pajamas with the elegance of evening wear, as Business Insider's Bethany Biron previously reported.

She wore another white ensemble with polka-dot accents that same month. 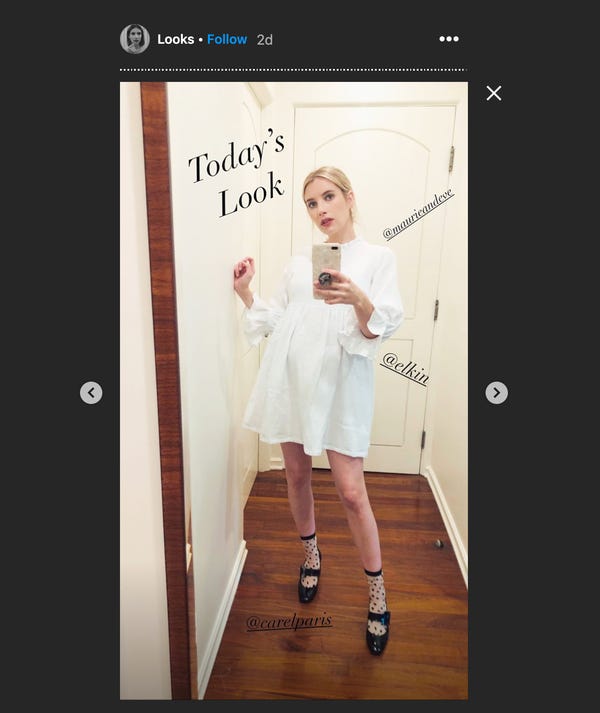 Roberts shared this mirror selfie, where she's seen with minimal makeup and an updo hairstyle, on her Instagram story. She wrote "Today's Look" over the photo.

Her Isla minidress from Maurie & Eve is made from crushed cotton and retails for $87 at the time of writing. It stands out thanks to its mid-length bell sleeves and high neckline with fringe detailing.

To complete the chic look, Roberts donned black, Mary Jane shoes with a silver buckle from Carel Paris — which are now sold out — and sheer socks with black polka dots.

On Labor Day, the actress lounged by a pool in floral swimwear. 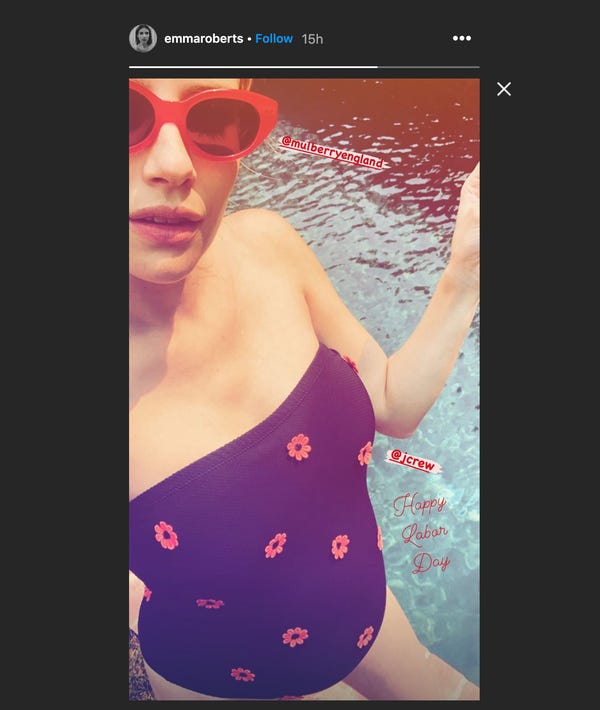 Her sold-out bathing suit, designed by J.Crew, is black, strapless, and covered in tiny red flowers. It perfectly matches her red Mulberry sunglasses, which are available to buy on Farfetch for $286.

Roberts showed her affinity for floral prints once again with a pink midi dress made from silk. 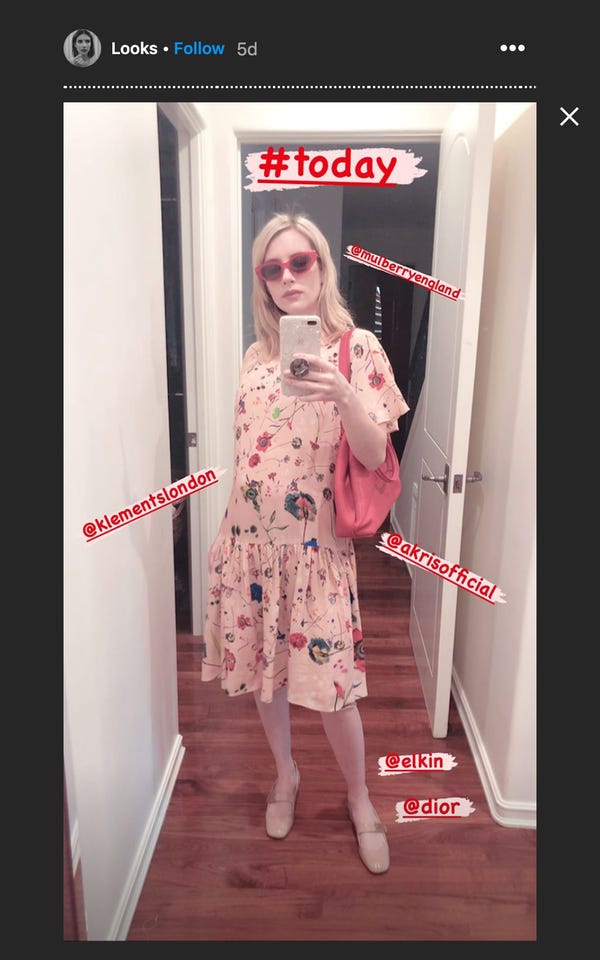 Her whimsical, drop-waist dress was designed by Klements London, and retails for $309 (£240). She styled the look with a $1,990 Akris tote bag, sold-out Dior ballet shoes, and the same $286 Mulberry sunglasses she wore on Labor Day.

Arguably one of her best maternity looks includes a polka-dot minidress and platform heels. 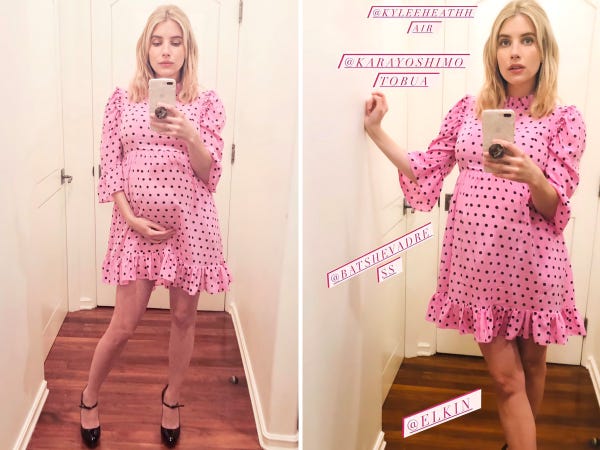 In early September, Roberts shared a photo of herself sitting in front of a mirror while wearing the pink outfit.

"Baby-doll dress has a whole new meaning," she captioned the photo. She also shared similar mirror selfies on her Instagram story.

The $450 dress seen in her pictures was designed by New York-based brand Batsheva. It has a high neckline, elbow-length bell sleeves, and fringe across the hem of its skirt.

The actress hinted at an upcoming project with one of her most recent maternity looks. 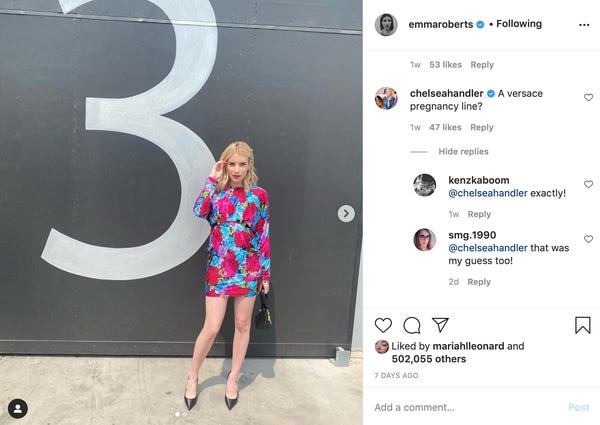 This @versace look coming in #january but not allowed to say for what yet… ??❤️?

Roberts shared a photo of herself wearing a pink-and-blue floral dress with long sleeves designed by Versace. She also wore pointed black pumps and carried a matching handbag.

In her Instagram caption, she wrote: "This @versace look coming in #january but not allowed to say for what yet… 💙🧷❤️🌸."

While it's unclear as to exactly what Roberts has in store, comedian Chelsea Handler thinks she knows, writing: "A Versace pregnancy line?"

Roberts has even found a way to incorporate stylish face masks into her pregnancy fashion.

Wear a mask ? Read a book ? @belletrist #thelightness by @knownemily ☁️ one of my favorite picks ⚡️

In a statement-making Instagram post in October, Roberts wore a gingham-print mask, black sunglasses, and a white dress with a yellow, floral print.

The latter garment from Faithfull the Brand is sold out at the time of writing, though her BaubleBar mask can be purchased in a $16 pack of three. 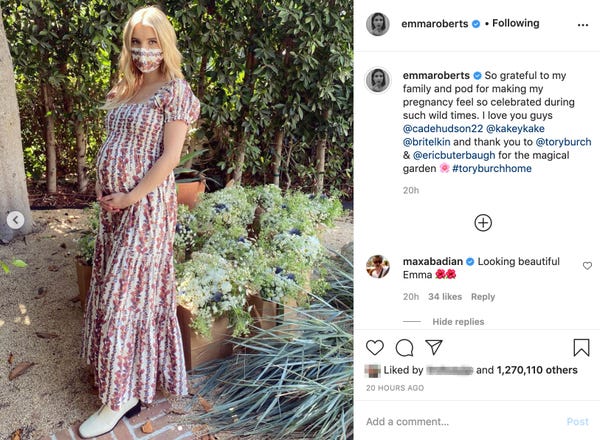 So grateful to my family and pod for making my pregnancy feel so celebrated during such wild times. I love you guys @cadehudson22 @kakeykake @britelkin and thank you to @toryburch & @ericbuterbaugh for the magical garden ? #toryburchhome

Roberts' $249 dress is "perfect for sunny days," according to the Tory Burch website. It has puffy sleeves, a shirred top, and a tiered skirt — all of which are covered in a print of hibiscus flowers, pineapples, and birds.

The designer also sells a two-layered face mask with the same print in a $35 set of five. Tory Burch says on its website that some proceeds from the masks will be donated to International Medical Corps to help fight the COVID-19 pandemic and the Tory Burch Foundation, which works to empower women.

At the time of writing, the white, zip-up boots that Roberts wore are sold out. They previously retailed for $59.99 from Mango.