The highest number of buyers relying on the loan were in London, with 12,206 homes bought using the scheme since it launched in 2013, compared to just 187 in the Isle of Wight – the county where potential homeowners are least likely to use the help. 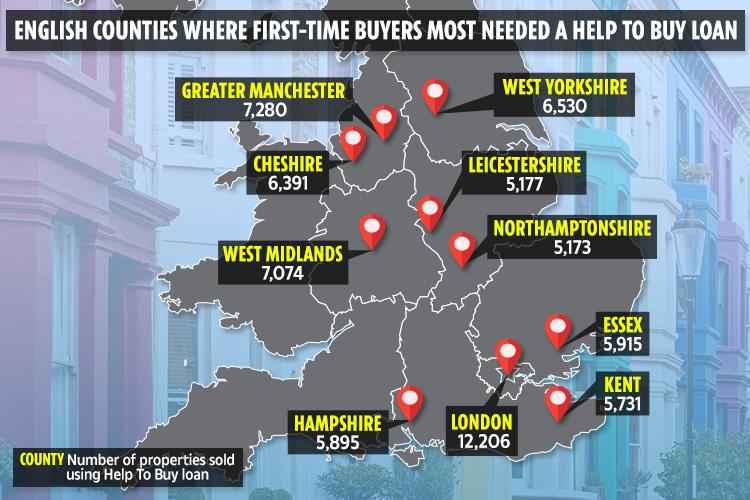 The disheartening stats come as it's revealed that four in 10 Brits wouldn't be able to buy one of the cheapest homes in their area, even with a 10 per cent deposit.

The government will lend you up to 20 per cent of the property value – up to 40 per cent in London – while you take out a mortgage for the rest of the cost.

It's interest-free for the first five years and allows new homeowners to buy a property with a 5 per cent deposit, but it's been slammed by critics for pushing up house prices by up to £8,250. 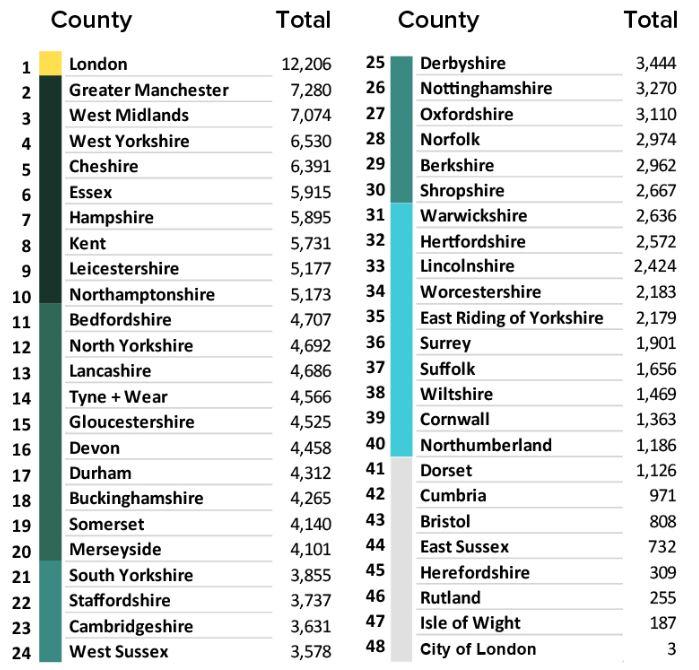 Even though the scheme is available in Wales and similar help is offered in Scotland, advisory firm Fasthomes.org focused the research on counties in England.

Its data showed that around 7,280 homeowners used the Help to Buy loan to buy in Greater Manchester, while 7,074 used it for properties in the West Midlands.

During the same period, up to 6,530 first-time buyers in West Yorkshire turned to the loan – almost half of those who used it in London.

After the Isle of Wight, first-time buyers looking to get on the property ladder Rutland, in the East Midlands, are least likely to turn to the loan with only 255 homes sold to buyers with the loan.

Only 309 home buyers in Herefordshire used the loan and 732 took one out for a property in East Sussex.

What help is out there for first-time buyers?

Help to Buy Isa – It's a tax-free savings account where for every £200 you save, the government will add an extra £50. But there's a maximum limit of £3,000 which is paid to your solicitor when you move.

Help to Buy equity loan – The government will lend you up to 20 per cent of the home's value – or 40 per cent in London – after you've put down a five per cent deposit. The loan is on top of a normal mortgage but it can only be used to buy a new build property.

Lifetime Isa – This is another government scheme that gives anyone aged 18 to 39 the chance to save tax-free and get a bonus of up to £32,000 towards their first home. You can save up to £4,000 a year and the government will add 25 per cent on top.

"First dibs" in London – London Mayor Sadiq Khan is working on a scheme that will restrict sales of all new-build homes in the capital up to £350,000 to UK buyers for three months before any overseas marketing can take place.

Starter Home Initiative – A government scheme that will see 200,000 new-build homes in England sold to first-time buyers with a 20 per cent discount by 2020. To receive updates on the progress of these homes you can register your interest on the Starter Homes website.

Of course, the data doesn't take into account that house prices in some areas of the UK are simply out of reach for first-time buyers, even with the government-backed scheme.

For example, 914 properties in the London borough of Barnet were sold to buyers using the loan compared to only two in Kensington and Chelsea and three in the City of London.

The research is a reflection of the depressing state of the housing market for first-time buyers, where house prices have drastically risen against stagnant wages.

The Help to Buy loan has been criticised by some brokers who predict that thousands of first-time buyers who use the scheme face being trapped by a lack of choice when it comes to taking out a new deal.

The Government is allegedly planning to scrap the popular flagship 'Help to Buy' scheme over fears it only helps the rich.

Ministers are planning to replace the scheme with a new system after this current arrangement expires in 2021.

Latest figures from Hometrack suggest that first-time buyers need an income of at least £53,000 for a home in Britain's 20 biggest cities.