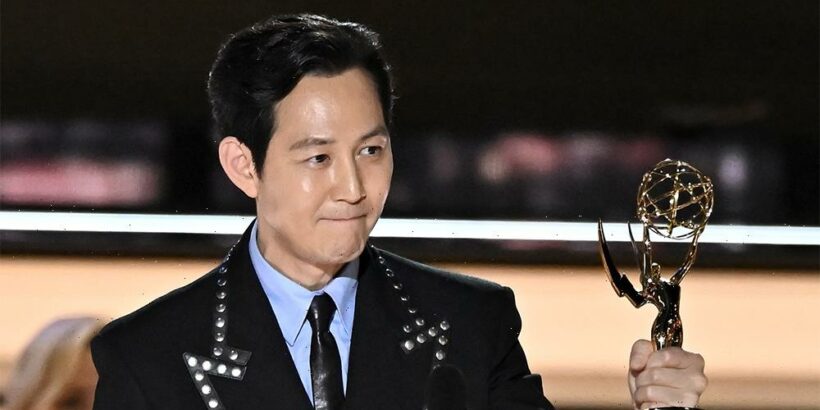 Back as a full-scale production for the first time since 2019, the Emmys moved, in moments, with a refreshing fleetness. But much of the production seemed strangely stuck in a hazy past.

Why, for instance, did host Kenan Thompson only uncork his best material after the first commercial break, after an opening during which he staggered through choreographed routines to TV theme songs? And why were those songs generally for series not honored at this year’s Emmys? We began with “Friends,” moved into “The Brady Bunch” — with a brief shoutout to the cast of that classic sitcom sitting in the audience, not to be mentioned again — and ended on “Game of Thrones,” the big winner at the last pre-COVID Emmys.

Back then, the Emmys didn’t have to reach to find ways to depict TV as a uniting force: The best drama winner made it so. But there was something striking, in this year’s broadcast, about quite how much TV’s marquee opportunity to honor its own ended up seeming embarrassed by its own medium. Television presented a lot for audiences to potentially latch onto; the Emmys seemed, at every turn, to bristle.

This is a criticism of the broadcast, not the awards-giving body. After all, the Emmys this year honored shows that are as wildly varied as “Squid Game,” an ultraviolent Korean drama; “Succession,” a razor-edged business satire; “Euphoria,” a gonzo meme machine weighted with teenage emotion; “The White Lotus,” a dark nightmare of luxury living; “Ted Lasso,” a sports-centric empathy-fest; and “Abbott Elementary,” an actually successful network comedy. All of these series have constituencies, and significant ones.

So why was the opening of the show dedicated to promoting “Friends” and “The Brady Bunch,” and — frankly — so much of Thompson’s material to relatively tepid material about the differences between streaming services? (Thompson’s most plugged-in moment came when reuniting with his old Nickelodeon colleague Kel Mitchell; the pair’s kids’ show “Kenan & Kel” last aired in 2000.)

It’s impractical to expect an Emmys broadcast to feature clips of any real length, or to avoid truncating speeches at all: Part of what is satisfying about the broadcast is the clicking into place of category after category, allowing the prizes themselves to build narrative. But interstitial matter seemed to waste time while having only the vaguest idea where the pulse of culture was: Even fans of “Law & Order” must have been only mildly satisfied by a Mariska Hargitay/Chris Meloni comedy sketch, and those who tuned in because they’re fans of one of the legitimately popular shows that were actually nominated were likely bored stiff.

Meanwhile, the show’s announcer, “SNL” writer Sam Jay, seemed confused and out-of-sorts — defaulting to saying the people onstage were hot when she ran out of ideas — while on-call DJ Zedd played baffling pop songs, seemingly pegged to nothing at all, for winners’ walks to the stage. Would it have been a moment in time if the multiple “White Lotus” acceptance speeches had been punctuated by that memorable theme song? I guess we will never know!

There were great moments throughout the Emmys — mainly generated by articulate winners, including, particularly, Zendaya, a second-time winner honoring those whose struggles with substance abuse match her “Euphoria” character’s, and Jean Smart, enjoying her moment while wondering if some “Hacks” fans are a little too young to be watching the show. And I appreciated both the pathbreaking sense of the “Squid Game” winners in the best actor and best director fields in drama, even as both seemed to hustle through their speeches, conscious of the red light about to flash. But if the Emmys’ interest is going to come from the honorees and not the production, I craved more: An eagerness to end things on time meant some speeches, notably Jennifer Coolidge’s, were cut short. (If there’s proof Emmy producers didn’t pay close enough attention to TV in the past year, it’s that they assumed we’d lose interest in Coolidge’s perfectly askew rhythm of speaking.)

But the Emmys, for good or ill, must end on time, and must include a monologue and various shoutouts to the home network. And one must be glad they exist, to put in one place a celebration of so much that is spiky and unusual and fun about television. It remains hard to fathom, though, that the celebration itself is so staid, so afraid of leaning into the quirk and intrigue that has made TV such a rewarding medium for its creators, who sat through a Kenan Thompson dance routine in person, and its fans, who sat through it at home, or skipped it in favor of watching “Squid Game” or “Hacks” or whatever great thing might win next year.