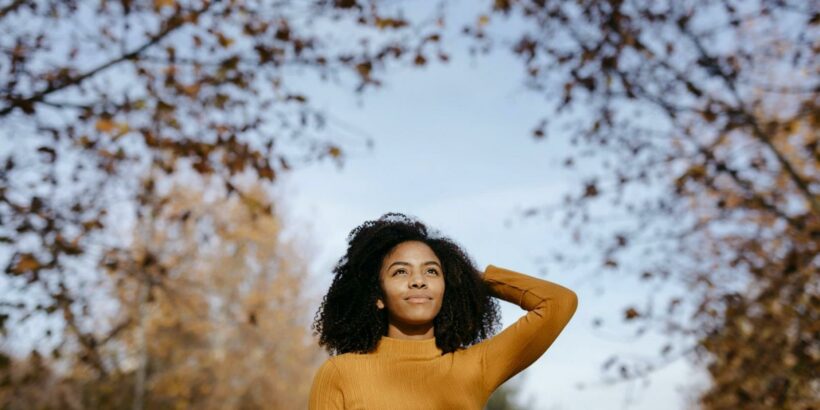 As Stylist’s digital writer, Lauren Geall writes on topics including mental health, wellbeing and women’s issues. She’s also a big fan of houseplants and likes to dabble in film and TV from time-to-time. You can find her on Twitter at @laurenjanegeall.

From taking photos in front of falling leaves to consuming endless pumpkin spice lattes, autumn is full of seasonal associations. But why do we enjoy romanticising this time of year so much? Stylist investigates.

When it comes to seasonal associations, autumn has got them by the bucketload. Sure, winter has Christmas – and all the jolly holly, fairy-light-covered moments that come with it – but nothing screams seasonality quite like the buzz that fills the air as soon as the first leaves begin to fall from the trees.

As a woman in her 20s, I’m not ashamed to say I’ve indulged in this annual excitement many times. From the joy of digging out my jumpers and swapping trainers for boots to breathing in the fresh, autumnal air and cracking out my pumpkin-spiced candle, there’s nothing quite like indulging in some autumnal romanticisation.

But what is it about the turn of the season – and in particular, the transition from summer to autumn – that makes us want to romanticise the world in this way? According to psychologist Lee Chambers, it’s got a lot to do with the feelings of comfort and nostalgia we get from engaging in seasonal activities.

“While the seasons are a form of change, they are an eternal constant, a change we can predict and feel like we have a semblance of control and predictability over,” he says.

“Seasons have specific rituals and anchors that we attach to them, which can foster feelings of nostalgia and take us back to the emotions of years gone by.”

This might explain why we never get bored of taking pictures in front of the fallen leaves or grabbing a pumpkin spice latte every time it hits menus, despite the fact that we do the same things every year. Indeed, while these seasonal activities are predictable, they’re also a constant in our lives – something that can prove particularly comforting when the world feels so uncertain.

The autumn aesthetic is hard to resist.

The reason why we enjoy romanticising the transition from summer into autumn in particular could also have a lot to do with this sense of comfort.

Unlike other times of the year, autumn is full of welcoming associations – from the fresh start offered by a new school year to the togetherness of the harvest period. And as such, Chambers explains, this seasonal transition brings with it a positive kind of buzz.

“While we don’t harvest and partially hibernate in the way we once did, autumn is often seen as a time of togetherness and connection,” Chambers says. “Whether it’s the warm colours of leaves or the cooler breeze, there is a drop in intensity on one side that is welcoming and attractive.”

Chambers continues: “On the other side, it’s the start of a new educational cycle, a thrust into ending the calendar year on a high and a floating descent into the festive period, which for so many is a positive anchor. And autumn has a range of rituals based on bringing people together such as Halloween, bonfire night and harvest.”

So, there you have it. No matter how ‘basic’ it might be to enjoy autumn to the fullest, there’s a reason why we feel compelled to engage with the seasonal transition. In a world where so much is going on, it’s nice to have some consistency to fall back on – and romanticising autumn is a good place to start.