The Round House is an unlikely wooden building on the Sydney University campus. It's close to the veterinary teaching hospital because its purpose was to provide a platform to view horses and cows. 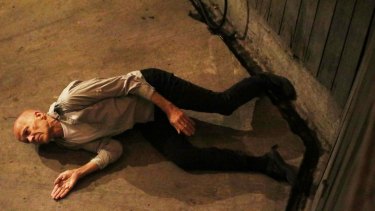 Peter Fraser appears to be “walking” on the wall.Credit:VSEVOLOD VLASKINE

Starting nearly a century ago, students stepped up to a circle just over two metres above ground and looked down on a handsome wooden corral, lit by daylight through windows behind them. In 2012, the building was restored with the help of the National Trust. And what could be more natural than to have dancers perform in it?

First, Peter Fraser responded to the architecture and purpose of the building. He entered by inching his way under the door on his back and slowly made his way around the circle on his side. From the audience viewpoint, it looked as though he was walking horizontally on the wall, a clever trick of perception.

Rising to a central standing position he acknowledged the audience and celebrated the architecture, especially the wonderful wooden weave of its witch's hat ceiling. He also gave a spirited visualisation of an animal in an enclosure in a performance that was thoughtful, deeply focused and realised in his characteristically measured, angular style of movement.

Suddenly, he was gone and so was the lighting. In darkness there was a slight sound below, and Victoria Hunt emerged from a tiny door in the wall. With only the campus lights outside to help us, we observed her limbs moving her slowly and spider-like around the space.

Standing up, delicately balanced, and by now making use of stronger, multi-coloured lighting, she appeared to portray a lost soul (human? animal?) in search of a way out, literally and metaphorically. An unexpected leap to the top of the wall and a crouching crawl along the ledge of the viewing platform provided a dramatic high point that emphasised the mysterious being she presented in her memorable solo.

The Attractor No.3 was another unusual presentation by De Quincey Co. Its combination of movement and music (Laura Altman, Eric Avery and Sonya Holowell on clarinet, bells, violin and wordless vocals, prowling around behind the audience) was exhilarating, and it made a worthy bookend to March Dance, a month of activities that mainly featured workshops, classes, lectures and works in progress.