Comedian Frank Hampster knows all too well that there are certain topics you shouldn't joke about.

"As far as comedy goes, paedophilia is taboo," he says. "You just don't do jokes about it."

But the Melbourne-based stand-up, himself a survivor and witness at the Royal Commission into Institutional Responses to Child Sexual Abuse, has chosen to break that taboo.

"I'm doing an hour-long show on it and people love it," he says. "I treat victims sensitively." 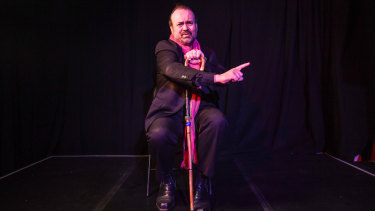 Cardinal Sins: Pell in a Cell, showing at this year's Fringe Festival, delves into Hampster's experience growing up in Ballarat in the 1980s, where he witnessed – and was a victim of – sexual abuse by a Catholic priest.

It's not the first time he has mined personal trauma for comedy. In 2016, he was forced to rewrite a show that made light of his time being cross-examined by QCs during the royal commission. On the eve of its opening night, he turned that show into a retrospective on his childhood.

I want to use this show to help heal them.

Three years on, he's back with a new show dissecting the incarceration of George Pell – a topic that many would struggle to find humour in. He uses stories, songs and games to illuminate the stories of victims and the evils of abusers.

Hampster believes the best thing about comedy is its ability to "punch up" – to go after those he calls the "powerful and pompous", rather than those without the means to defend themselves.

"As a child, I always used humour as a defence to bullying, so to me this is a natural progression," he says.

His past performances have brought laughter as well as tears. Hamster, who has a forensic understanding of the history of abuse in Victoria's Catholic Church, says some people have stayed back for hours after the curtain falls to engage him in a Q&A.

Looking back on the Pell trial, Hampster says he was confident that the appeal judges would throw out a key defence of Pell's legal team – that he could not perform sexual acts while wearing his full clerical robe.

"I knew if any of those judges had been to a single Melbourne Cup day, they would dismiss that defence," he jokes.

After Hampster performs at the Fringe, he plans to take a year off, before touring the show.

"I want to show this to other communities who have also seen the sorrow of child sex abuse," he says.

"I want to use this show to help heal them. It's pretty easy to make it about Boston rather than Ballarat – I'll just have to change the names of the priests."

Cardinal Sins: Pell in a Cell will run from September 21-29 at the Melbourne Fringe Festival.