Since the very beginning of the Manifest journey, Cal’s importance has been apparent. The little kid who was dying of cancer before Flight 828 disappeared for five and a half years seems to have been affected by the time jump in ways the rest of the passengers were not, perhaps due to his immune system being compromised. Last week, fans theorized Cal might even be "the Holy Grail" the Major was seeking. The Manifest Season 1 episode 12 promo shows next week’s episode is all about Cal, as his family races to save him.

This week’s episode changed titles between trailer drop and debut, from "KXTA" to perhaps the more thematically appropriate "Contrails." Next week’s episode is currently entitled "Vanishing Point." Should fans be concerned about where Cal has gone?

Here’s the synopsis for this week’s upcoming episode.

And here’s the trailer:

This week’s episode was a little frustrating. After last week’s clues about "The Major," this week didn’t push the story of who is behind the mystery of Flight 828 forward in the slightest. Nor was the story conclusive what happened to Fiona and Captain Daly. Were they shot down? Or is it just what the shadowy conspiracy wants everyone to think?

But by the end of the hour, Ben and Michaela at least figured out one mystery fans have been waiting for them to put together: Autumn is the mole. And it seems this discovery will finally trigger what fans are desperate to learn. Who is the Major? Perhaps viewers will even discover what she’s up to.

But the trailer does hold one piece of good news. Grace *finally* is faced with definitive proof of Cal’s abilities. Moreover, it looks like she’s also accepted Ben isn’t going off the deep end when he claims something strange is happening to their son. 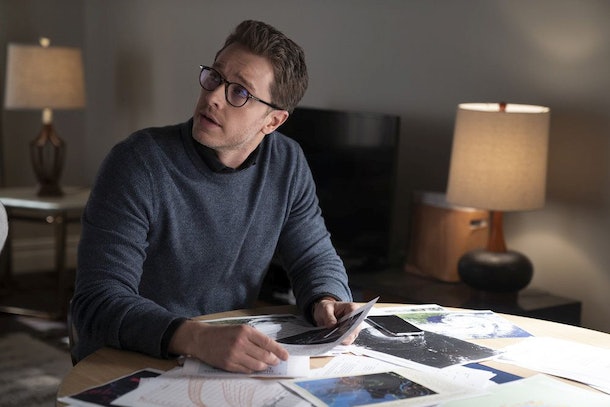 Not that anyone is hoping Grace and Ben get back together. (At least, I’m not.) But the "Grace doesn’t notice her kid came back strange" stuff was starting to get old and tired. It is time for this source of conflict to be done, especially now Cal’s been kidnapped.

Of course, Cal being Cal, already saw he would be kidnapped, and according to the trailer has left not only drawings, but an entire trail of breadcrumbs to lead the adults to find him, hidden away in some church sanctuary. The question is, can the family can get there before the Major does.

Unless, of course, the point is for the Stones to find Cal before the Major arrives. Perhaps Cal isn’t the quarry after all, but the bait to bring Ben and Michaela to the Major. In a show like Manifest, nothing is off the table.