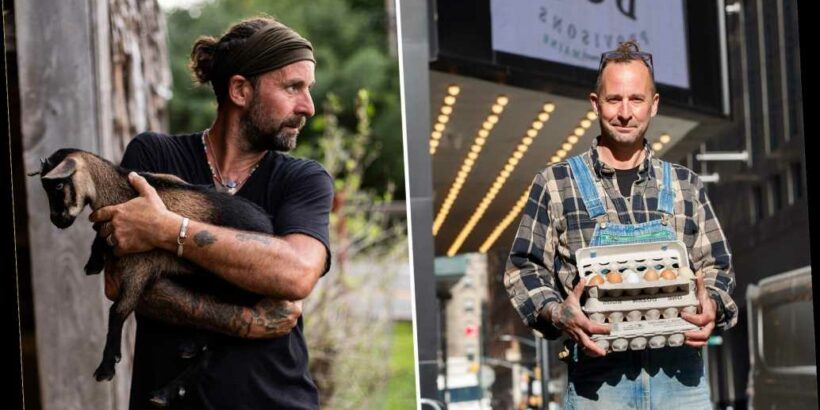 Turkish olive farmer battles to save her land from coal mine

His chickens are laying golden-yolk eggs — and funding his rural dream.

Last March, Bill Seleno was at the top of his game as the executive sous chef at Midtown event spot Gotham Hall when he heard the call of the wild.

He and his wife, Tyrany Montez, flew the coop for what they thought was a week-long trip to their rarely-used vacation home in Fayette, Maine. But they fell head-over-heels for the rural life. Not long after, they moved full time into the 1860s farmhouse and upgraded it, converting the land into B & T Homestead and Provisions — an 11-acre sustainable farm.

But native New Yorker Seleno, 49, had an eggs-ellent idea for how to pay for his farm fantasy. He scoured YouTube for tutorials on how to raise chickens and other livestock. Selling the fruits of his labor, he runs a buzzy one-man egg market in Manhattan, making the trip down a couple of times a month. “You can’t stay away from New York,” he said.

The enviable eggs come from his 120 free-range heirloom chickens, whose divine diet includes fresh watermelon: “It’s hilarious,” said Seleno, who previously ran the kitchens at Guastavino’s Strong Place and Albert Hall Tavern. “We toss wedges to them — usually a summer thing.” They produce 24 dozen eggs a week, which Seleno insisted are “incredible” compared to the pale yellow yolks typically found in the supermarket.

He loads up his truck to deliver eggs, for $4 a dozen, to old work friends and new fans who follow the chef’s journey on his B & T Provisions Instagram page. “To find eggs of my quality are [typically] $12 a dozen,” said Seleno, adding that chefs who snap up his goods tweak their menus just to use his farm products.

“I still love New York, it’s still home and I miss it tremendously, but my heart and soul is in the farm,” he said, explaining that why he doesn’t mind the regular jaunts.

But it’s necessity too. With a drought and ensuing hay shortage last summer, the price of a single bale ballooned from $3.50 to $12. “The math on that is crazy — I need to sell enough eggs to buy the hay.”

His restauranteur buddies can vouch for his farm-raised product.

“Originally I thought he had a mental breakdown,” said Mariusz Lukasik, the chef at Midtown’s Cornerstone Tavern, of Seleno’s big move. But then he tried the silky, orange-yolked product. “A good egg has to be creamy on the yolk, and not meant for scrambling,” he said approvingly.

When he meets Seleno to pick up the goods, it’s a thrill. “It’s like the French connection for eggs,” said Lukasik. “My [restaurant] guests get the best eggs in town, without even knowing it. The only problem is I always run out. I guess you can’t mass-produce natural, clean farming.”

That’s true — but Seleno and Montez have other big plans for their sprawling farm.

Beyond just chickens, the pair cares for a menagerie that includes 45 ducks, 5 goats, 50 rabbits, two nanny goats named Thelma and Louise, cows, sheep, mangalitsa pigs, hogs, piglets, black roosters and even emus. They used to work at restaurant kitchens into the wee hours, but now they’re up at 6 am to feed the animals, clean the pens and sweep the barns.

The chef, whose energy is contagious, admitted farm life has changed him. “Now, I catch myself saying, ‘I’m going to go out and brush the cow.’ I never thought I’d use those words in a million years.”

Seleno said he’s looking to eventually expand the farm’s on-the-ground offerings, with a tea room, a beauty shop selling handcrafted grooming products, and a wood-fired pizzeria. Also in the works is a food truck on the grounds, daily intimate farm-to-table dinners, and a wellness retreat for burnt-out New Yorkers.

“You have to think outside the box to make money,” said Seleno.

Until then, it’s all about the eggs, and his pilgrimages down to the city to sell them. “The hustle-bustle of New York is like crack,” Seleno said. “It feeds the beast. It’s in your blood.”