How old is 3AW? So old that when it started 90 years ago the station’s motto “Talking Melbourne” didn’t exist – and the medium’s lifeblood, talkback, was not even legal.

For the on-air stars of today like Neil Mitchell, the idea of 3AW without the voices of the city it serves is all but unthinkable. Talkback as we know it dates back only to 1980, and its first incarnation was not made legal until 1967.

“Thank God they did,” says Mitchell in an interview to mark the 90th birthday of the station he has called his professional home since 1987. “It’s the pulse, it’s the lifeblood of what we do.” 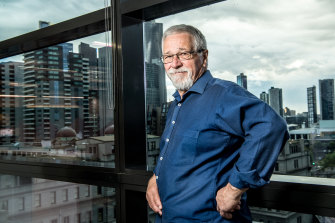 3AW mornings host Neil Mitchell has been with the station since 1987.Credit:Justin McManus

Now the dominant commercial AM force in Melbourne, 3AW (which is owned by Nine Entertainment Co., the owner of this masthead) was not the first or the biggest radio station in the city when it launched. With that first broadcast – 8pm on February 22, 1932, from His Majesty’s Theatre – it joined 3DB, 3UZ, 3AK, 3AR and the ABC’s 3LO on the airwaves at a time when the idea of “news radio” didn’t exist.

Station veteran and unofficial historian Simon Owens says the attractions were radio serials and quiz shows for the first 20 years.

“We have pictures of people sitting around looking at their radio … the armchairs would face looking at this inanimate object sitting in the corner,” he says.

Pioneering sports and news broadcaster Norman Banks was a force in the 1950s, and hit upon the formula that most closely matches the 3AW spirit of today with a program called I’m on Your Side.

“He’d read out letters on air and say, ‘I see Mrs Bottrell of Lilydale is having problems with the pothole at the end of her street. Mrs Bottrell, if you’re listening, I suggest you ring my friend so-and-so at the council and tell him you’ve spoken to me and I’m on your side’.”

And there was the goldmine.

“News and problems,” as Owens puts it.

In 1959, 3AW opened Australia’s first radio newsroom. And in 1967, communications laws were changed to allow the broadcast of live phone calls – but with a catch.

“You had to give your name and address, the producers would have the White Pages there and verify that person existed in the phone book. Then they’d hang up and phone them back to make sure they were who they said they were.”

Talkback as we now know it – people ringing in from anywhere, claiming to be anyone and being put to air – was not legal until 1980.

As 3AW’s breakfast ratings powerhouse Ross Stevenson says: “In many ways it was the original social media.”

It is Stevenson, Mitchell and former host Derryn Hinch who are most associated with the station’s decades-long domination of the modern Melbourne market. Hinch toppled radio king Bert Newton with a morning show that made headlines almost as often as it reported them. Mitchell, a newspaper man, went from occasional Hinch fill-in to weekend breakfast, then to drive, then to the mornings slot he has ruled for 32 years.

“It was always going to be short-term,” he laughs today. 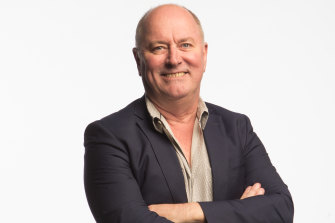 In the latest ratings survey, 3AW beat all stations on the AM and FM dials, with an overall audience share of 16.6 per cent, well ahead of ABC Melbourne and Gold on 10.1 per cent. In the 55-64 age group, 3AW snared more than 20 per cent of the Melbourne radio audience. Among the over 65s, that share rose to more than a third.

The pandemic has been the standout story in Mitchell’s time on air – “Nothing like it, ever” – and brought home just what a vital role radio plays in the daily lives of listeners.

Stevenson says the station knew what the breakfast program’s role had to be during these pandemic years.

“We decided our job was to be the happy place.”

Station manager Stephen Beers describes pandemic programming this way: “We took a deliberate step of companionship at night … so it’s not about going to bed thinking, ‘This is the end of the world’ – and then you woke up happy with breakfast.”

It’s a tricky radio balance, to be both companion to loyal listeners and to bear witness to the people and events that shape a city and country. And in radio, serendipity sometimes plays its part.

In 1955, a school boy from Sydney was a contestant on Jack Davey’s quiz show Give It A Go, which was syndicated on 3AW.

Davey introduced him: “He’s a nice sort of lad and he’s been here two nights, battling away and he just hasn’t had much luck.”

And with that, 3AW captured the first appearance on air of a man who would warrant many hours of air time four decades later.

That cheeky kid was John Howard. Like so much else with 3AW over the past nine decades, the rest was history.