Regal in red! The Queen cuts a striking figure in eye-catching scarlet as she’s joined by Lady Sarah Chatto, Charles and Camilla at church in Balmoral

The weather may have taken a decidedly wintry turn in recent days, but the Queen regaled against the grey skies this afternoon in a striking scarlet coat and hat.

As her annual summer break at Balmoral comes to an end – the 92-year-old monarch is due in Windsor on Friday for Princess Eugenie’s wedding to Jack Brooksbank – the Queen was joined by Lady Sarah Chatto, Prince Charles and the Duchess of Cornwall for church this morning.

Sporting a scarlet coat and matching hat with fur trim and snug-looking black gloves, the royal looked in good spirits as she made her weekly journey from the royal estate to nearby Crathie Church. 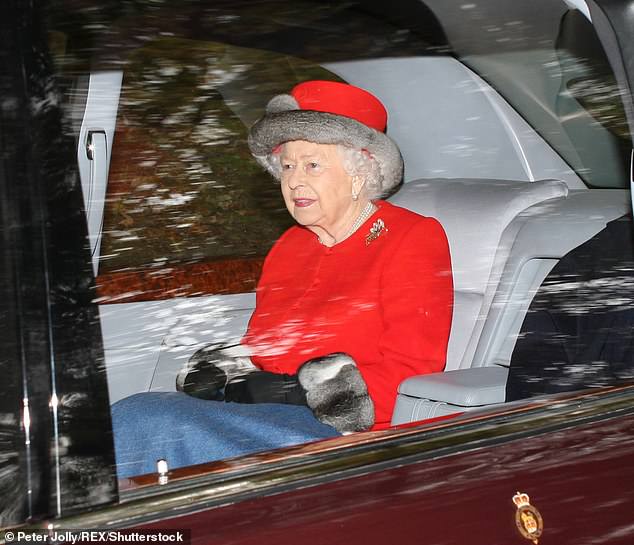 Monarch in red! The Queen opted for a colourful outfit as she arrived to attend Crathie church close to Balmoral this morning; the monarch, 92, finished the look with a matching fur-trimmed hat and black gloves 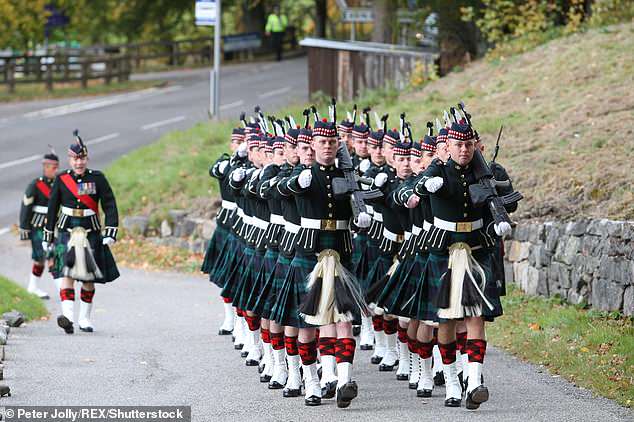 A 20-strong group of Scottish soldiers welcomed the royal entourage this morning, providing a guard of duty for the Queen 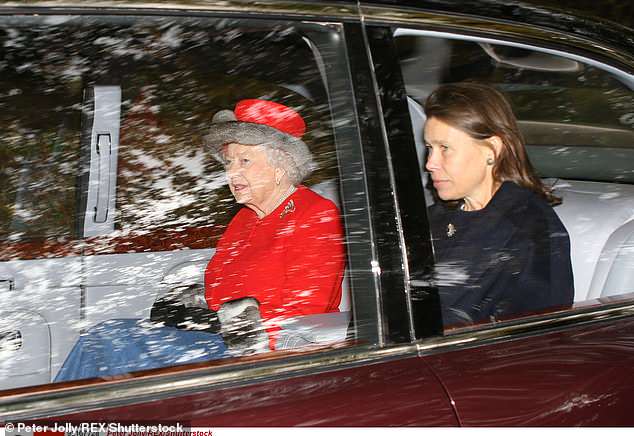 Travelling without the Duke of Edinburgh, 97, the Queen was joined by her 54-year-old niece, Lady Sarah Chatto, daughter of the late Princess Margaret and Antony Armstrong-Jones

Staying warm beneath a blue woollen blanket, the Queen chatted to her niece, Lady Sarah Chatto, the 54-year-old daughter of the late Princess Margaret.

The Duke of Edinburgh, 97, wasn’t in attendance at the service.

The Duchess of Cornwall, 71, sported an elegant deep red velvet beret to keep out the Scottish chill.

The royal entourage received a ceremonial welcome to the traditional Sunday morning outing, with kilted soldiers on guard duty as the royals arrived.

Wearing their traditional green and navy tartan, the 20-strong group of guards marched outside the church as the royal party pulled up. 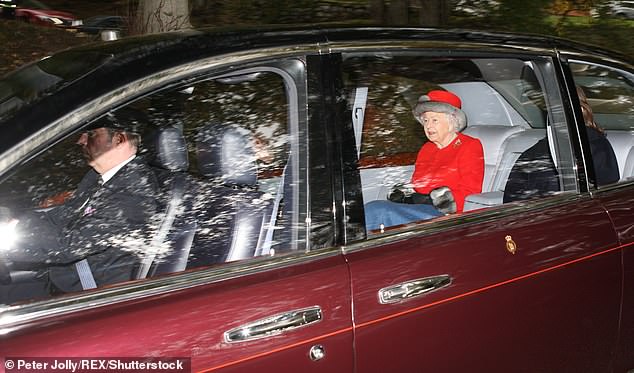 The Queen took her traditional form of transport, the claret-coloured Bentley, as she left the royal estate this morning 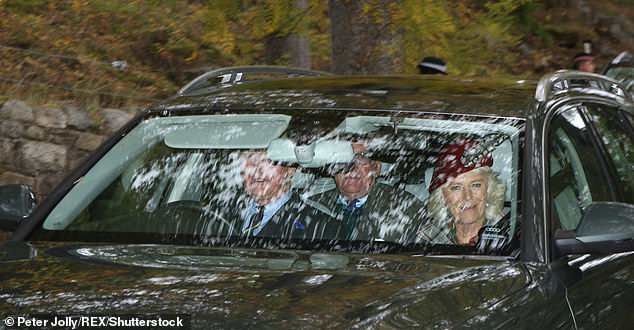 Following closely behind was the Prince of Wales; the 69-year-old heir to the throne drove the Duchess of Cornwall to the church service 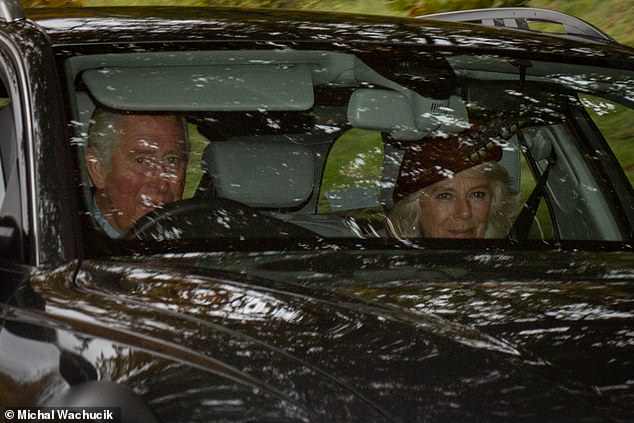 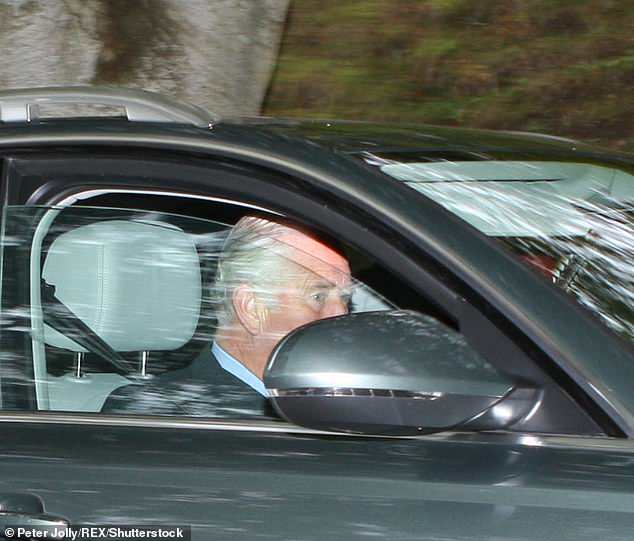 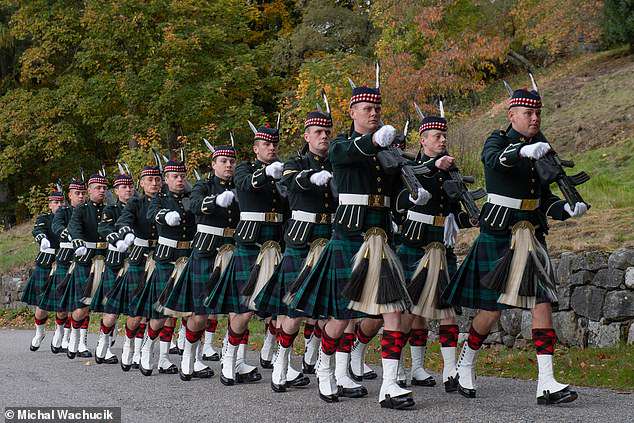 It’s likely that this will be the last appearance this season of the Queen at the church, as she travels back to London for her granddaughter’s wedding at Windsor Castle on Friday.

Princes Eugenie, 28, will wed her fiancé Jack Brooksbank at 11am at St George’s Chapel, in front of their families and a rumoured host of celebrity guests. 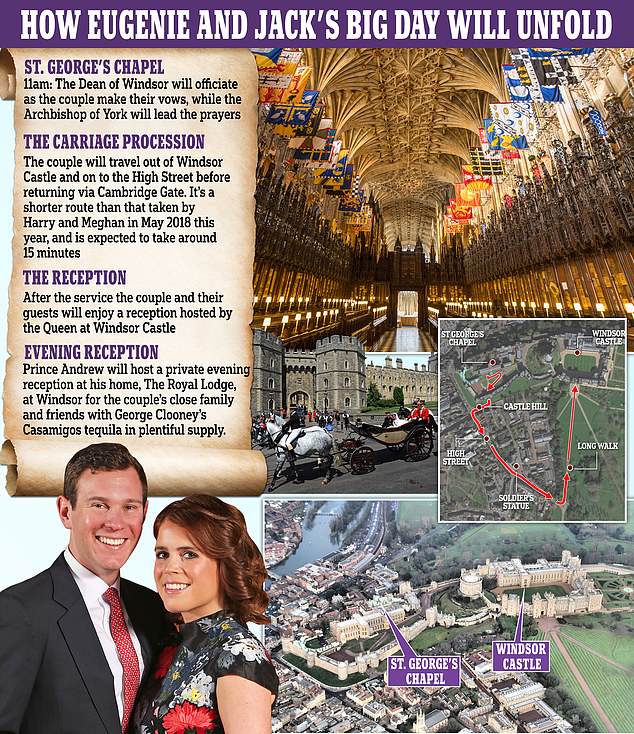 A rundown of how Princess Eugenie and her partner Jack’s wedding on Friday 12th October will unfold, following the 11am ceremony at St George’s Chapel at Windsor Castle

The happy couple will exchange vows in front of the Dean of Windsor, the Right Rev David Conner.

Eugenie appears to have paid a sweet tribute to her parents, the Duke and Duchess of York, by choosing the Archbishop of York John Sentamu to lead the prayers.

Princess Eugenie is due to arrive at St George’s Chapel at 11am and, although it’s tradition for the bride to be fashionably late, royal weddings run to a strict schedule.

The ceremony is being held at the same venue where Meghan and Harry, Peter Phillips and Autumn Kelly and Sophie and Edward exchanged vows, and is expected to last around an hour.