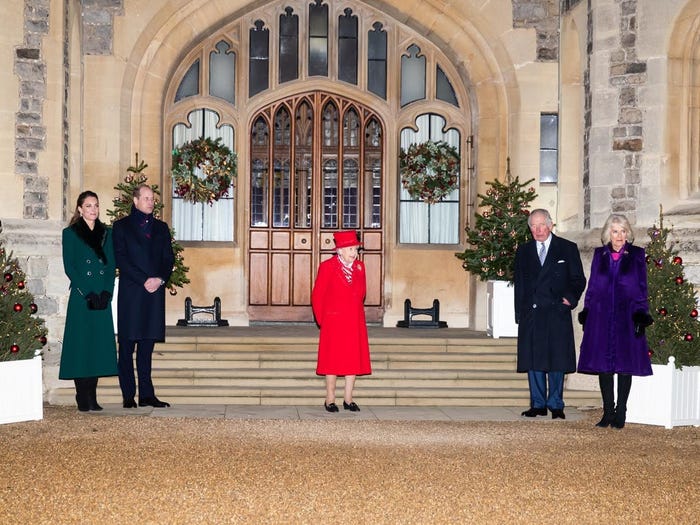 The British royal family dressed in warm coats and stood in a socially-distanced line as they reunited for a rare public group outing amid the ongoing pandemic.

Queen Elizabeth II thanked local volunteers, key workers, and the Salvation Army at Windsor Castle on Tuesday. In a picture shared by the royal family's Twitter account, Prince Charles, Duchess Camilla, the Duke and Duchess of Cambridge, Princess Anne, and the Earl and Countess of Wessex can be seen joining her.

In the tweet, the royals thanked the Berkshire volunteers and workers for their service during the pandemic and for their work over the holidays. Berkshire is the county in England where Windsor Castle is located.

The family could also be seen in photos wearing masks and conversing inside a big white tent lined with festive trees.

Prince Philip was absent from today's engagement, though Town and Country magazine reports he's currently living at Windsor Castle with the Queen. He retired from public life in 2017.

Kensington Palace, Buckingham Palace, and Clarence House did not immediately respond to Insider's request for comment regarding the royal outing.

Before this outing, the royal family was reportedly last publicly seen all together in March

While Queen Elizabeth II, Prince Charles, and Prince William have each made virtual and socially-distanced appearances and addresses throughout the pandemic, today's event marks a rare group appearance in 2020, per Reuters.

Good Morning America reported that Tuesday's Windsor Castle outing was the first time this many royal family members have gathered publicly since March. They were last seen all together at the Commonwealth Day Service that took place at Westminster Abbey on March 9, according to Good Morning America.

The Commonwealth Day Service also marked the Duke and Duchess of Sussex's last public appearance as working members of the royal family.

Insider royals reporter Mikhaila Friel previously wrote that Prince William and Kate Middleton took a three-day trip across the UK, starting on Sunday, to thank healthcare workers for their work during the pandemic. They traveled by private royal train.

The official Kensington Palace Instagram account shared that the purpose of the trip was "to pay tribute to the inspiring work of those who have gone above and beyond to support communities across England, Scotland, and Wales."

As Friel wrote, the couple was criticized for violating lockdown rules in Edinburgh, Scotland, (the first stop of their trip) where non-essential travel is banned. However, a spokesperson for the Scottish Government told Friel that it "was told in advance about the planned visit and were ensured that the royal household were aware of statutory restrictions in place in order to inform its decision to proceed."