Moving like a monarch didn’t come easily to Olivia Colman. When filming began on the third season of the Netflix drama The Crown, her exasperated director took to yelling, “Queen, not farmer!” at his nervous star.

“There are so many little things to remember,” sighs the English actor who plays Elizabeth II between the years 1964 and 1976 in series three and four of the international hit. 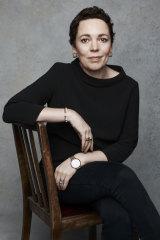 Olivia Colman plays the Queen in The Crown.Credit:Netflix

“Take her handbag for example. It’s in one position for walking then it moves to here [she slides a white bag down her arm] when she’s seated. She likes to have her left hand over her right.”

It must be strange playing the most famous woman in the world? “Whoa… it’s, um, weird,” says 44-year-old Colman, squirming on her chair. “Everyone knows what she looks like and there’s only one woman in the world with this hairdo. I’m trying not to think about it, to be honest.”

She smiles the nervous smile she deployed so often as detective sergeant Ellie Miller, the downtrodden police officer in Broadchurch, the coastal whodunnit that made her a household name. You want to hug her; reassure her she’ll be a brilliant Queen. Except it turns out she already is.

When the cameras roll at Lancaster House – the mansion in the ritzy St James district of London that doubles as Buckingham Palace for filming purposes – the shy, self-deprecating woman who trained as a primary school teacher before catching the acting bug, slips effortlessly into her role as the British monarch. 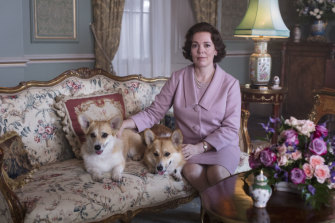 The scene being shot by an army of technicians, actors and extras on a cold Sunday in November is a re-staging of the meeting, in October 1969, between the British royal family and the Apollo 11 astronauts. Colman waits patiently for the lights to be adjusted. She is wearing a pale blue dress and a wig that replicates the artful assembly of curls seen on all the coins, stamps and banknotes.

Someone shouts “Action!” and her back straightens. Her chin lifts several degrees and she adopts the preternaturally calm expression of a woman who has grown up in the spotlight. “Hill-yoo,” she says extending a smile and a gloved hand to the actor playing Neil Armstrong. “Thenks for coming.”

Helena Bonham Carter, who plays Princess Margaret, the other half of The Crown’s royal sister act, appears to be Colman’s temperamental opposite. The diminutive, fine-boned actor exudes a patrician confidence. When she sweeps into the room in full costume – a floral dress, pearl necklace and earrings and purple satin shoes embellished with gemstones – the urge to bow is almost irresistible.

Like Colman, Bonham Carter, 52, wears a wig that gives her an instantly familiar profile – “a bit of a poodle look,” as she calls it. Big hair was important to Margaret, she explains, because the Queen’s sister was self-conscious about her height. She even had the floor of her Rolls-Royce raised to gain a few precious inches. “Her job was to be conspicuous so she did everything she could to make herself taller and the hair helped,” says Bonham Carter. 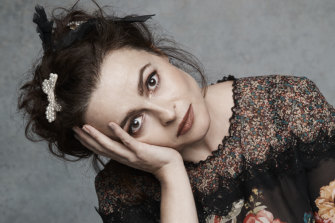 ‘HBC’ – as she seems to be known on set – might be forgiven for viewing The Crown as another day at the office. After all, she has been something of a fixture in posh costume dramas since her breakthrough performance as the naïve debutante Lucy Honeychurch in the 1985 adaptation of E.M Forster’s A Room with a View.

“I don’t really think about genres,” she says crisply. “If there’s a story that’s compelling I don’t care if it’s told then or now. I do seem to be cast in a lot of period stuff possibly because I’m small and dark and pale.”

In fact, Bonham Carter insists she was petrified when she was asked to play Princess Margaret. Why? Because the series “was incredibly successful” and “because I’m playing Margaret at an age when people can recognise and remember her". 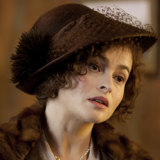 Helena Bonham Carter: “I don’t look like her at all”.Credit:Netflix

Adding to the pressure on both actors is the phenomenal success of the first and second seasons.

The way Bonham Carter tells it The Crown’s new cast are each haunted by two “ghosts”: the person they are playing and the character created by the actor they replaced.

“It’s a hard thing to inherit,” she says. “In my case the ghosts are the real Princess Margaret and the actress who delivered an award winning performance.”

She is talking about Vanessa Kirby, whose mesmerising portrayal of Margaret as a vivacious but highly volatile young woman earned her a Bafta TV award for best supporting actor. 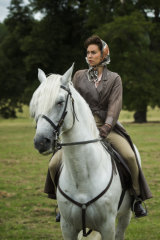 If Kirby has set a high bar for Bonham Carter, spare a thought for Colman. She steps into the shoes of Claire Foy, whose pitch-perfect turn as the young British monarch who ascended the throne in 1953, won her an Emmy Award, a Golden Globe and a seat at Hollywood’s high table.

Colman has plenty of her own trophies, of course. They include three Baftas and a Golden Globe for The Night Manager. Other actors seem to worship her – Meryl Streep famously described her as “divinely gifted” after they played mother and daughter in the 2011 Margaret Thatcher biopic The Iron Lady. After we meet, her performance as Queen Anne – yes, another British ruler – in the big screen period drama The Favourite won her an Oscar.

But no one, not least an actor, can rest on their laurels. There is no denying that Foy’s bravura performance as the Queen has cast a long shadow.

“Yes, it’s hard to be following Claire,” says Colman looking anxious again. “I was such a fan of what she did.”

Yes, it's hard to be following Claire. I was such a fan of what she did.

Her husband, the writer Ed Sinclair, didn’t do much to ease his wife’s nerves, apparently. Colman already knew she had the part when the second series of The Crown went to air and whenever Foy appeared on screen, Sinclair would exclaim, “Oh, she is amazing!”

Colman cackles with laughter at her husband’s disloyalty. But it is clear that everyone involved in the third and fourth series of The Crown knows that the expectations of Netflix and its global audience are stratospheric.

Both Colman and Bonham Carter say they spoke to their predecessors before accepting their roles, but neither was seeking acting tips. “We didn’t really discuss the character, because it wasn’t a character she had invented,” explains Colman. “We each have to do our own version of it.”

Bonham Carter agrees: “We’ve both got fascinating people to play – and they can be played in many, many ways.”

The fortunes of Queen Elizabeth and Princess Margaret in the period covered by the third and fourth series could be seen as divergent. The Queen’s marriage seemed to enter calmer waters after she gave birth to her fourth child, Edward, in March 1964. She formed her closest bond with a prime minister after the Labour politician Harold Wilson took the keys to No. 10 Downing Street in October that year. 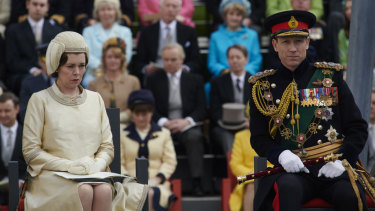 Duty calls: Olivia Colman and Tobias Menzies in The Crown.Credit:Netflix

In a sense, the pressures on the monarchy were increasingly external. Public support for the royal family was felt to be waning and the British economy was hit by concerted industrial action.

Princess Margaret’s domestic life became more volatile. She and her husband, the photographer Tony Armstrong-Jones (played by Ben Daniels in the new season), embraced the styles and fashions of the '60s and drew bohemians and celebrities into their hedonistic circle. But their marriage became increasingly tempestuous and was ultimately doomed.

Does Bonham Carter see Margaret – a woman who tied the knot with Armstrong-Jones after she was forbidden from marrying Peter Townsend, the RAF officer she believed to be the love of her life – as a tragic figure?

“No,” she says without hesitation. “I think she was fed up with being seen as tragic. She was highly intelligent and wise enough not to care too much.”

Bonham Carter prefers to see her character as “very brave” and “utterly herself”.

“She never feigned anything which was problematic because she wasn’t very diplomatic," she says. "Unfortunately, she was hopelessly bored because she had a lot of resources – a great brain, talent and a sense of humour – that she couldn’t put to use.”

I think she was fed up with being seen as tragic. She was highly intelligent and wise enough not to care too much.

Compared to her late sister, the Queen appears inscrutable. Bound by her sense of duty and protected from the public eye by her wealth and vast retinue, her private thoughts are a matter for speculation. 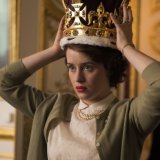 A hard act to follow: Claire Foy as the Queen in series one.Credit:Netflix

Ask Colman how different the Queen is in series three and she deflects the question with a joke. “Well, this one has brown eyes,” she says. “She’s older. They’re adding a few grey hairs into the side of my wig with each episode.”

Is Colman a royalist? “That’s an unfair question,” she says smiling, “but I’m not sure that it matters. I’m an enormous fan of the Queen as a human being. She’s f–king marvellous – I wouldn’t want her job for the world.

“She’s like our rock, our keel. When she goes we’ll be thrown into a state of uncertainty. She’s not meant to exercise any influence, but she can remind people of the commitment they’ve made to their role. I think a lot of bad things didn’t happen because we have her.”

Playing the Queen sent Foy’s star into orbit. Colman is already well known as a television actor, but there is every chance The Crown will move her into another league.

True to form, she declares herself entirely unprepared. “I don’t really leave my house. I’m not very good at fame – I never signed up for it,” she says. “I know it’s a part of my job and 99 per cent of fans are so nice, but I’m a bit of a chicken.”

The Crown season 3 is released on Netflix on November 17.