Australian television’s most robust rivalry took another turn this year as Channel Nine ended 12 years as runner-up and toppled Seven in the ratings. Nine’s channels clinched the “total people” tally with 29.4 per cent to 29.0. It’s not an emphatic, thumping triumph, but it’s enough to gain bragging rights and claim the crown. Over recent years, the contest between the two networks has been so tight that 0.1 per cent would be sufficient. A win is a win. 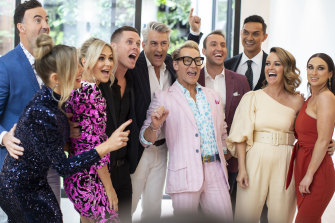 The Block has remained a ratings juggernaut for Nine in 2019.

But TV is a cyclical business. For years before Seven’s domination, Nine was The One and Seven seemed destined to be the disgruntled second-place holder. Now, Seven’s decade of domination has ended following a period described by recently installed CEO James Warburton as “weak, inward focused, tired and stagnant”. He declared that the network had served up “a string of poor programs and failures”. And, he added, “Our competitors have had it easy … We haven’t had a clear strategy nor focus. But from here on in, we will be fierce.”

Warburton has initiated what he hopes will be a resurgence led in large part by a back-to-the-future campaign involving a range of revivals: Big Brother, Farmer Wants a Wife, SAS: Who Dares Wins, Australia’s Got Talent and RFDS. There’s also a slant towards family-oriented novelty programs such as Pooch Perfect and Mega Mini Golf, as well as more of The Full Monty. Clearly, the impact of shows such as Lego Masters and The Masked Singer has not gone unnoticed.

How successful this particular brand of ferocity will be remains to be seen. But some areas have already emerged as key 2020 battlegrounds.

This hotly contested slot, a lucrative zone for commercial networks, has seen a long-running duel between Seven’s Sunrise and Nine’s Today. It’s likely to attract a lot of early attention, not just because Nine will launch its new hosting line-up on January 6 but because it’s been such turbulent territory. 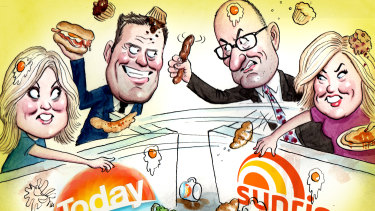 Not for Seven, which has had the clearly dominant performer, but because of the headline-grabbing ructions at Today, which are especially problematic in a zone where consistency is an asset. Today has been rocked by a run of upheavals: the departure of Lisa Wilkinson; the sacking of Karl Stefanovic; the audacious but unsuccessful attempt to reshape the show with female co-hosts Georgie Gardner and Deborah Knight; and now the return of Stefanovic, with 60 Minutes reporter and Weekend Today co-host Allison Langdon by his side.

There’s likely to be an initial curiosity bump in the ratings as viewers check out the new team. But Today needs them to stay as it has a lot of ground to recover, with Sunrise averaging 275,000 metropolitan viewers nationally in 2019 to Today’s 197,000.

The Three Musketeers are no more. While food shows remain a popular prime-time staple, the long-standing MasterChef trio of judges has disbanded, with Matt Preston and Gary Mehigan moving to Seven to host the international cooking competition, Plate of Origin, without George Calombaris. 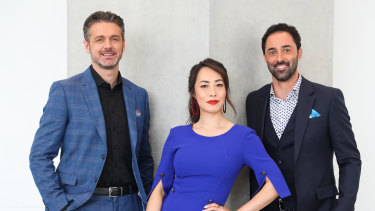 At Ten, MasterChef enters a new era with a fresh judging panel: food writer Melissa Leong and chefs Jock Zonfrillo and Andy Allen. Meanwhile, Seven’s long-running cooking contest, My Kitchen Rules, has been tweaked into MKR: The Rivals, which sees Manu Feildel and Colin Fassnidge heading opposing teams, while, the promotions suggest, Pete Evans will helpfully be on hand to carry a box of kitchen implements.

Reality TV franchises have demonstrated a portability and perhaps-surprising durability: they can run on one network, be discarded and subsequently revived by another, sometimes successfully.

Network-defining formats such as MasterChef, Married at First Sight and The Block are rare. Big Brother, for example, is set to launch on Seven, its third network home. Australia’s Got Talent has bounced between Seven and Nine, while Farmer Wants a Wife previously spent nine seasons on Nine. Dancing With the Stars and The Amazing Race, now on Ten, both originally appeared on Seven, and Ten has made a hit of Australian Survivor, which fizzled on Nine and Seven. 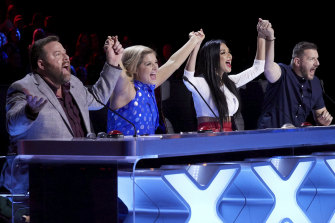 The commercial free-to-air networks regard these shows as essential tentpoles for their prime-time schedules. First out of the blocks will be I’m a Celebrity … Get Me Out of Here! which has become Ten’s answer to filling the gap left by its lack of cricket or tennis coverage: it’s attempted to turn the guessing game about who’s going into the jungle into its summer sport.

Drama series are risky and comparatively expensive, but a good one lends a network the kind of prestige that a reality TV show never will. Sadly, the number of locally produced drama series is diminishing. They’re no longer the main game for FTA networks, which appear to be leaving that territory largely to the streaming services and doing the bare minimum required by the quota system.

Nine has a healthy looking crop with Informer 3838, Halifax: Retribution and another season of Doctor Doctor. Ten has more of Five Bedrooms, Playing For Keeps and How To Stay Married, as well as The Secrets She Keeps, starring Downton Abbey’s Laura Carmichael. Seven’s newfound ferocity doesn’t appear to extend to drama: it has announced only two series, Between Two Worlds and The Flying Doctors’ update RFDS.