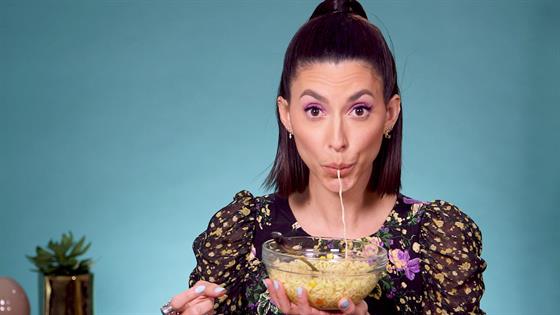 And, from what we saw during last night’s return of The Soup, she has accomplished this goal. In addition to being a hilarious comedian and pop culture fan, Jade is a self-proclaimed open book.

Thus, we already feel like we know her so well. However, it helps that we watched this oh-so informative interview featuring the new E! personality.

In the footage above, Jade shares her lesser-known talents, her origin story and so much more.

Good to know! Of course, this isn’t the only juicy tidbit Jade reveals as she also says she’s a sucker for “intense eye contact.”

Oh, and don’t get us started on her wild tongue tricks. Don’t fret, Jade displays them all in the hilarious video above.

All jokes aside, Jade has had quite the journey to get to where she is today. Born in São Paulo, Brazil, it’s a dream come true for Jade that The Soup is airing in the South American country.

“I’m gonna get emotional even talking about this, but the fact that The Soup is airing in Brazil is just…I’m speechless,” Jade honestly expresses. “My brain can’t fathom it. Just so exciting. Not only it’s in my home country and my family gets to see it, but recently I’ve been doing a lot of stand-up there in Portuguese.”

WARNING: Jade’s Portuguese joke about her ex-boyfriend’s dolphin sounds during sex is not for the faint of heart. (But, you will laugh out loud.)

For all of this and so much more, be sure to watch the informative sit down above!

Watch a brand new episode of The Soup Wednesday at 10 p.m.!