Suburbia has long been derided as a safe, passive place devoid of culture. F Scott Fitzgerald was at it as early as the 1920s, describing the inferiority of "the bored, swollen towns … with their interminable inquisitions", and ever since the suburbs have been considered places from which to escape, engines of decency and conformity where nothing ever happens.

But a new project is celebrating one of Melbourne's suburban heartlands, casting new light on working class history in a public art experience in the form of a bus tour. 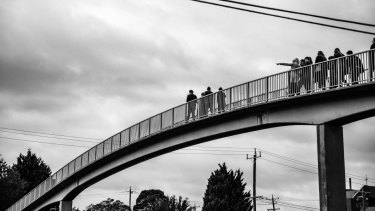 Participants in the art bus tours will travel to six secret locations around Moorabbin.Credit:Shuttermain

Six Moments in Kingston, taking place in the municipality that takes in Moorabbin, Parkdale, Mentone and surrounds, will bus participants to locations where historical events occurred, which have been interpreted as artworks spanning musical, video, sculpture and performance works.

Moorabbin doesn't spring to mind as a hotbed of – well, anything much at all, really, but Cross (who was born there) and Bishop found so many remarkable events they had to whittle them down. They settled on the years between 1977 and 1981, which Cross describes as Moorabbin's "salad days".

"It was very much an aspirational Australian suburb that, by the '70s, had become a heartland of Australian culture… a whole raft of things had happened even before our six years. The Whitlam and Fraser debate at the Moorabbin town hall, for example," he says.

"But we chose those six years because we felt they spoke to an important transition in Australian culture, from the idealism of the 1960s into a slightly different tenor by the late '70s and early '80s."

An intersection of social history, public art and performance, Six Moments draws on similar ideas to the pair's 2017 project Treatment, in which they curated place-responsive artworks at Werribee's water treatment plant.

Unlike the Werribee plant, the city of Kingston isn't a "fenced-off territory" but one where, says Bishop, "the bus is originally sutured to the community". 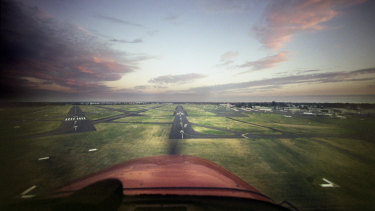 And many of Kingston's residents play integral roles; part of the remit for the artists was to involve the local community.

The "moments" encompass a diverse range of subjects, which participants will first learn about from commentary on board the bus (narrated by actors Michael Caton and Kate Fitzpatrick). There's the story of The Grange, a stately homestead built on the Nepean Highway in the late 1800s, but later controversially demolished and replaced with the Moorabbin Police Station. It's the most enigmatic of the moments, says Cross and "a bit of a metaphor for our interest in this period, with its faded glory". Artist Spiros Panigirakis, who grew up nearby, explores the suburban concern of municipal bureaucracy mediating redevelopment ideas and architectural propositions, through a number of installations.

Craftivist Tal Fitzpatrick celebrates Moorabbin's first female councillor, Julie Cooper, who was elected in 1976, later becoming the mayor. In a "beautiful coincidence", as Bishop describes it, Fitzpatrick's project will brush up with local voters on the day of the federal election.

It wasn't all conservative in '70s Moorabbin – artist Steve Rhall's work focuses on the area's history of industrial action, from protests at the Phillip Morris factory to a live-in protest against homelessness and the demolition of The Grange conducted by two teenage girls at the Kingston Town Hall. Nobody has been able to track down the anonymous girls, but input comes from local Aboriginal and Torres Strait Islander arts group Kingston Koorie Mob.

One of Australian Rules Football's most infamous moments also happened in Moorabbin, when controversial player Phil Carman headbutted an umpire in 1980 (subsequently destroying his career), and will be explored through a playful video work by artist Laresa Kosloff, featuring local footballers and a choreographed video work. 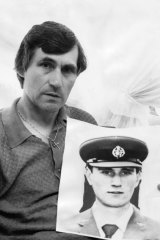 Guido Valentich with a picture of his son, Fred Valentich, who vanished mysteriously in 1978.

Arguably the area's most famous incident – especially in global conspiracy theorist circles – will be interpreted by members of art collective Field Theory at the National Aviation Museum at Moorabbin Airport.

In October 1978, 20-year-old pilot Fred Valentich set out from the airport in a Cessna 182L for King Island, but went missing shortly after he reported seeing a metallic aircraft moving at high speed. Valentich told air traffic control a mystery craft was "playing some sort of game. He's flying over me two, three times at a time at speeds I could not identify".

Mid-sentence, contact with Valentich was lost, and his plane, and body, were never found. His disappearance became one of Australia's most enduring aviation mysteries – and remains one of the world's most popular UFO conspiracies.

Various theories abound – did Valentich fake his own death? Was the inexperienced pilot disoriented? And why were his words so similar to dialogue from the popular film Close Encounters Of The Third Kind? – but 40 years later there are no answers.

"It's one of those things that … continues to feed people's imaginations," says artist Jason Maling. He's reluctant to give much away about the work, which features the museum's volunteers.

"Our interest is more about how when you drop into this, you get completely hooked with this fantastic story, this unsolved mystery, but when you investigate some of the thread, you open up … a perpetual mystery, a black hole of what happened, what could have happened. Which, in a lot of these cases is the sustaining thing, rather than the event itself."

Maling and fellow artists Martyn Coutts and Anna Schoo have taken the Valentich mystery as a starting point, rather than re-creating the incident.

"We drop people in and then explore a little more about fear of flying, essentially what I think the story goes to," he says. "Like a lot of these cases, there's this lone individual out over the ocean in an aircraft and I think that experience of the unknown and the faith we put into the engineering of a machine is interesting."

They aim to investigate how mysteries like these function – and like most of the works, there's a level of audience immersion, a "drift from audience to participant," as Cross describes it.

The final moment, created by Shane McGrath, features a massive number of locals and possibly an even wider reach than the Valentich story.

McGrath's "moment" is the release of pop star Rick Springfield's global 1981 hit Jessie's Girl; Australian-born Springfield's family home was in Parkdale. His mother lived there until recently, and Springfield was a frequent visitor.

McGrath was initially unsure how to tie his work together, but "music was always going to be front and centre", he says. 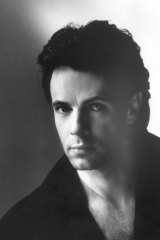 Rick Springfield, who achieved global fame with his 1981 hit Jessie’s Girl, was a regular visitor to Parkdale.

And of course, that music was always going to be Jessie's Girl, which won Springfield a Grammy and has been referenced in popular culture and many cover versions since its release 37 years ago.

McGrath is keeping the work under wraps but reveals that it includes members of Parkdale Secondary College, singers from the Unified Filipino Elderly Association, the Bull Terrier Club of Victoria and Lukes, the Longbeach Ukulele Club.

One of their uke players, Amanda Cooper, signed up for the gig only to discover her late mother Julie was the subject of one of the other moments.

"It's fantastic! Mum loved her time on the council and as mayor, although it was hard for her with all men. The whole project is great – although learning Jessie's Girl has caused a bit of controversy in the ukulele club," she says. "We've had some issues over the timing of the tambourine during the opening, but it's going to be ok."

There was also some resistance from one of the members when he heard there would be bull terriers involved – but the former postman was won over when he heard the work was taking place in Melrose Street; Mrs Springfield had been one of his favourites. It doesn't get much more suburban.

"We have this perception of the ubiquity of suburbia, that it's all the same, everyone's got a Commodore and a quarter acre, 2.2 kids," says Cross, "but this project is about saying, you know what, remarkable and interesting things have happened in places you maybe aren't expecting."

It's also about engaging people who might not ordinarily step inside a gallery, says Cross.

It's evidently working – Amanda Cooper has already booked 16 bus tickets for her family, including her 83-year-old uncle. "He's never been to an art exhibition in his life," she says, "but he asked for a ticket to this."