The struggle is real! IT worker details the most shockingly stupid computer problems he’s had to fix – including his BOSS thinking work was ‘incomplete’ because he failed to scroll down

An IT worker has taken to Imgur complain about some of the most mind-bogglingly stupid computer ‘issues’ he’s had to fix.

The Imgur user, who goes by Sembe, posed a series of memes on the site in which he detailed some of the ‘problems’ he’s been asked to deal with at work.

While IT workers certainly have legitimate computer issues to fix, though, they also get called in to take care of non-issues that could be solved with just the tiniest bit of common sense. 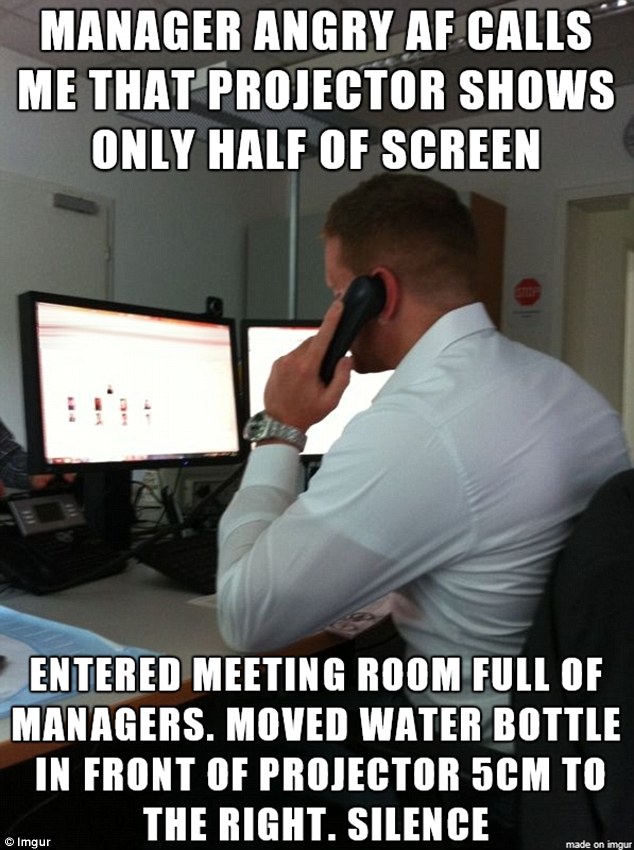 Ugh: An Imgur user who goes by Sembe shared some of the maddeningly dumb problems he has had to solve while working in IT 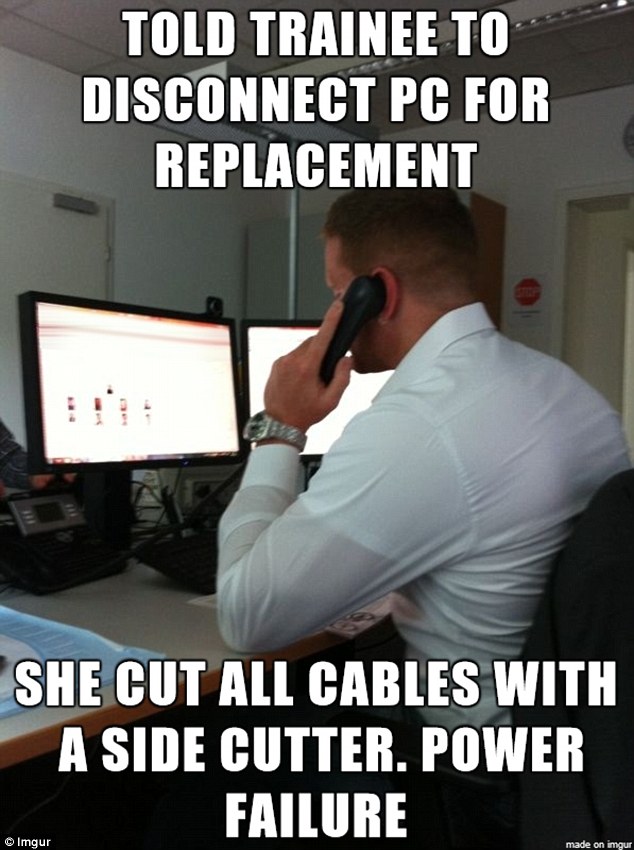 Seriously? Someone who was told to disconnect her computer physically cut the cables

‘The Struggle is real in IT,’ Sembe wrote.

He recalled the time an angry manager called him and complained that the projector was only showing half of the computer screen in the projection.

When Sembe entered the meeting room, he immediately saw the problem — which wasn’t tech-based at all.

‘Moved water bottle in front of projector 5cm to the right. Silence,’ he said, pointing out that the bottle was blocking the projector.

Another time, he told a trainee at his office to disconnect a PC because she was getting a replacement. Instead of unplugging the computer, ‘she cut all the cables with a side cutter.’ 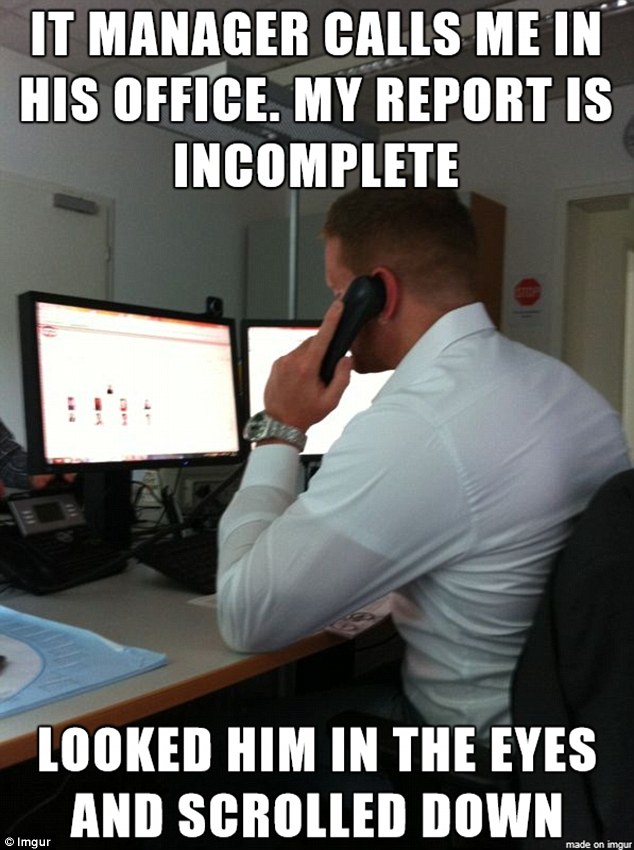 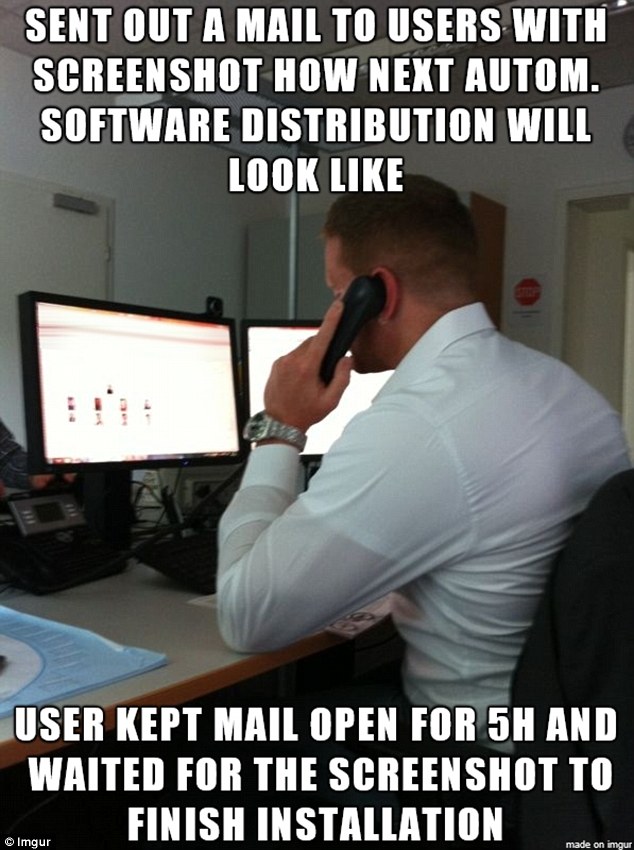 Dumb dumbs: While IT workers certainly have legitimate computer issues to fix, they also get called to take care of non-issues that could be solved with just the tiniest bit of common sense

Another user complained that printer ink was leaking. When Sembe got on the scene, he saw that she had opened the toner cartridge (the ink) with a screwdriver and poured the powder inside into the printer.

One particularly behind-the-times computer user was baffled by an email from IT. Sembe had send around a message explaining that there would be an automatic software update, adding a screenshot of what the notification would look like.

The confused employee thought the screenshot in the email was the actual update, and kept the mail open for five hours waiting for installation to complete.

And ten, Sembe said, he faced issues with his own boss. The IT manager had called him into his office, complaining that his report was ‘incomplete.’ 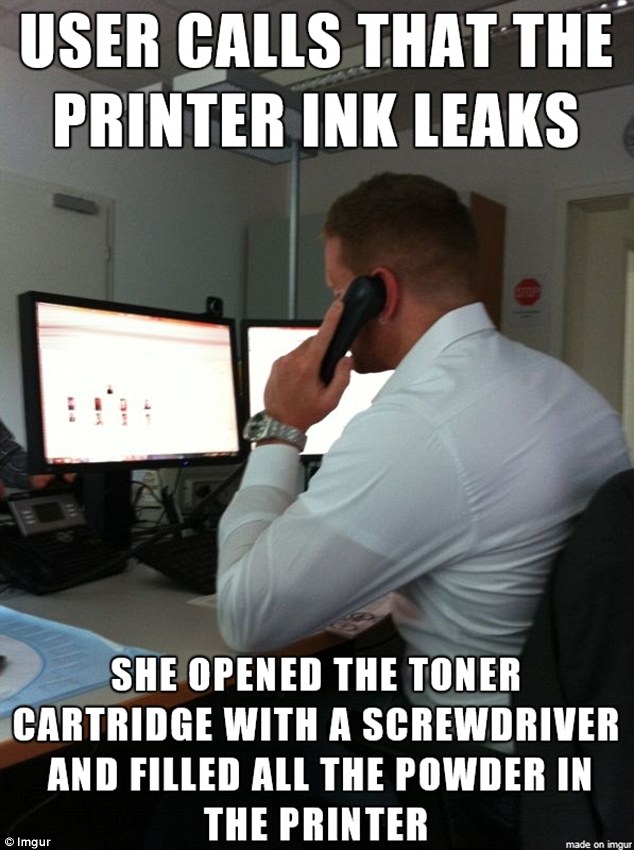 Word to the wise: Don’t use a screwdriver to open printer ink

Same: His post inspired similar complaints from other people who have worked in IT

Sembe then looked him in the eyes and simply scrolled down to show the rest of the report.

Sembe’s collection of memes inspired similar complaints from commenters. Some shared their own stories.

‘As a former IT guy (I like ‘computer dude’ better), I can’t count the number of IT requests involving changing wallpaper or screen saver,’ wrote one.

‘As a former IT lady, I’ve had a coworker saying the mouse wasn’t working. He had cut the cord because he wanted a cordless he heard about,’ added another.

‘I work IT. Above all things, it drives me crazy when users try to tell me what’s wrong when they have to f***ing clue,’ wrote a third.