You can tell it’s election season because Cath Andrews is handing out the blueberry muffins, while her husband accuses the other side of shameless stunts.

Bright and early on Wednesday, Labor’s “big red bus” carted journalists to Ballarat East, in the safe Labor seat of Eureka, for the official start of the Victorian election campaign where Premier Daniel Andrews announced plans for cheaper V/Line fares and more services for the regions. 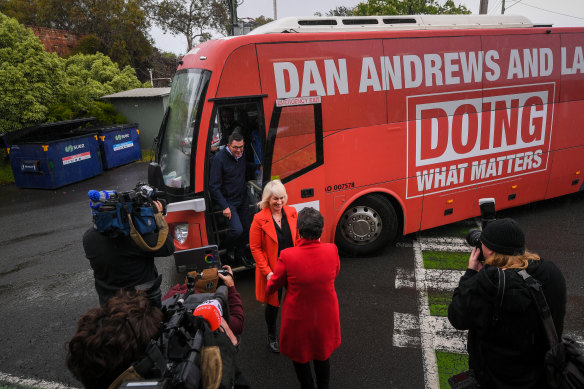 Premier Daniel Andrews and wife Cath Andrews get off Labor’s “big red bus” in Ballarat East for the first official day of the 2022 election campaign.Credit:Justin McManus

While the premier hit the road to regional Victoria, Opposition Leader Matthew Guy was deep in the Melbourne suburbs. “I’m not focused on his bus,” Guy told journalists at a family home in Parkdale, where he announced cost-of-living relief by cutting water bills.

The Coalition has decided against taking a bus out on the hustings. Instead, they unveiled a different campaign vehicle, a 1970s-style ambulance they called the “ditch Danmobile” – but were quickly accused by the Labor-aligned ambulance union of breaching the law by impersonating the emergency service.

Like Guy, the premier was not engaging with the competition. “I’m not going to talk about the stunts of others,” he said.

Andrews, with his wife and his colleagues, and wearing hi-vis at a train manufacturing depot, announced a re-elected Labor government would cap the cost of a daily ticket on the regional network at $9.20 and add more regional services in a $1 billion package.

Cath Andrews rarely joins the premier at public appearances but is a staple at election time and has helped soften her husband’s image. On Wednesday’s bus trip, she gave out baked goods and sandwiches to members of the press corp.

“Doing what matters”, the bus read in bold, next to photos of Andrews with tradies and nurses.

In the bayside electorate of Mordialloc, held by Labor’s Tim Richardson, Guy wanted to kick off the first official day of his campaign with a “modest” policy to address skyrocketing cost-of-living pressures, which voters identified as a key issue in research conducted by The Age to inform coverage of the state election.

The Coalition is pledging to freeze fixed household water charges for five years, saving a family up to $100 per year on their water bill. Guy said the figure was based on a 2014 review that found water authorities could find savings of up to $1 billion by running a more efficient service.

Guy had vowed to be more positive when he wrested back the Liberal leadership last year but within 10 minutes of the press conference starting he reverted to his former ways as an angry, bare-knuckle brawler.

He took umbrage with journalists who wanted to know why the opposition was refusing to release analysis from the independent Parliamentary Budget Office, which costed his flagship policy to cut public transport fares to $2.

In making the announcement last month, Guy said the policy would set the budget back $1.3 billion over four years, citing advice from the PBO. But after a request by Public Transport Minister Ben Carroll on the eve of caretaker mode, the Transport Department said the policy would cost twice as much, $2.6 billion over four years, including compensation to Metro Trains, Yarra Trams and bus operators for lost revenue.

“From Daniel Andrews’ own appointed bureaucrats, he then trashes Liberal Party policy. Spare me,” Guy said. “I wouldn’t trust anything that comes out of this guy’s mouth.” 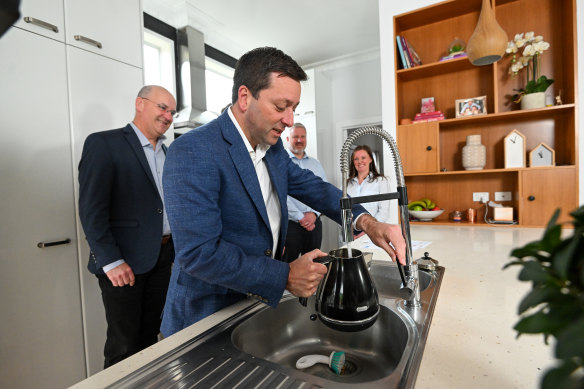 Opposition Leader Matthew Guy was at a family home in Parkdale on Wednesday for the start of the election campaign.Credit:Joe Armao

Andrews and Carroll dismissed questions about whether it was appropriate to use public servants to scrutinise opposition policies, but it was Guy who felt the most heat on the campaign’s cool and wet opening day.

Towards the end of his press conference, Guy was asked if federal Opposition Leader Peter Dutton would be campaigning alongside him.

“If you like, we will go back, and we’ll ring his office just for you, we’ll ring him up and find out the date, the time, the minute, the second all in advance,” Guy said, clearly exasperated.

He said Dutton would probably join him at some point. Prime Minister Anthony Albanese will be in Melbourne this week and is likely to join Andrews on the campaign trail.

“They are going to need to be careful that they don’t cut the fares so deeply so that there’s no revenue coming in to contribute towards future service improvements that will be needed,” Bowen said.

In the western suburbs, outside The Palms gaming venue in Maidstone, the Greens said they want to phase out pokies by adding limits to bets, increasing tax, launching a buy-back scheme and banning political donations from the industry.