Just a few days after revealing that the highly-anticipated sequel to TATBILB was getting ready to start filming, stars Noah Centineo and Lana Condor shared videos from the To All The Boys I’ve Loved Before sequel set on their respective Instagram Stories, and the clips prove that Peter and Lara Jean are still as sweet as ever. On Friday, March 22, Centineo shared a video of himself in the makeup trailer that included a brief peak at Condor. The star, who broke out playing Lara Jean Covey in the rom-com, also posted from set, sharing a mirror selfie from what appeared to be her trailer on the set, revealing that she was "ready" to get started on filming the follow-up to the beloved Netflix film.

"Breakfast burritos she ready," Condor wrote over the photo, which featured her goofing around behind the scenes. Centineo, meanwhile, gave fans a glimpse into the process of getting camera-ready by filming a video of himself having his eyebrows plucked in the makeup trailer. After jokingly screaming each time the makeup artists tweezed another hair, Centineo turned the camera to reveal Condor, who was providing emotional support from the next chair over. "Go to your brave place," the actress said, while Centineo fired back, "I don’t have a brave place!"

Despite her teasing, Condor seemed thrilled to be working with her on-screen love interest once more. On March 18, after Centineo tweeted that he was on his way to film the To All The Boys sequel, Condor responded, "i can’t wait to see ya," along with a heart emoji. 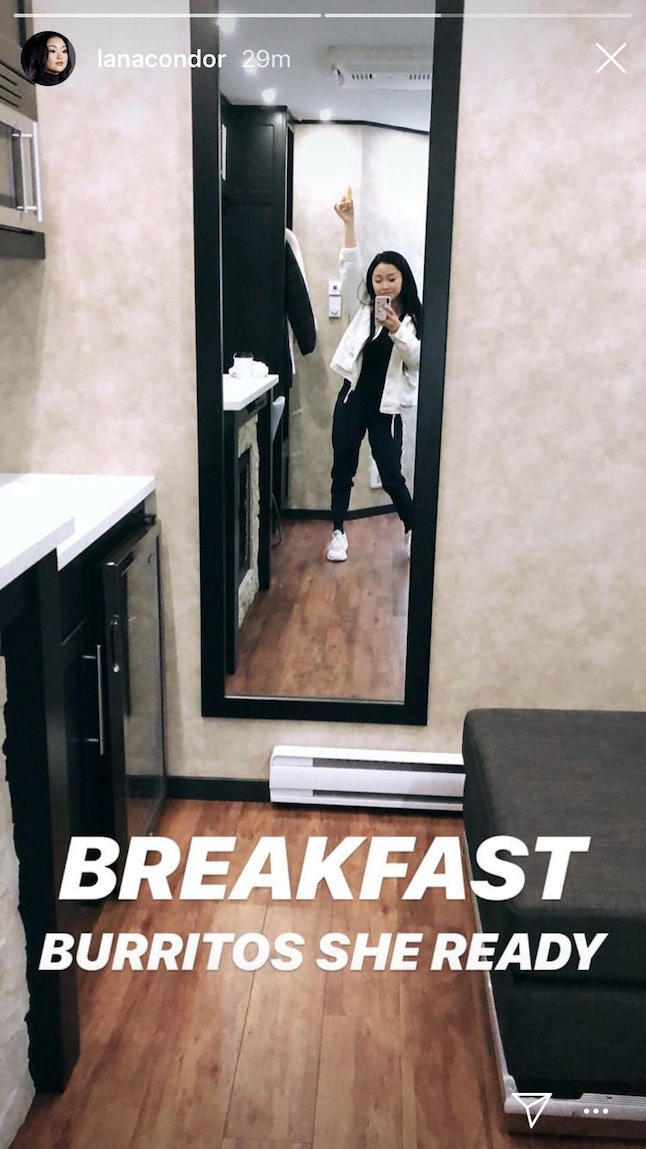 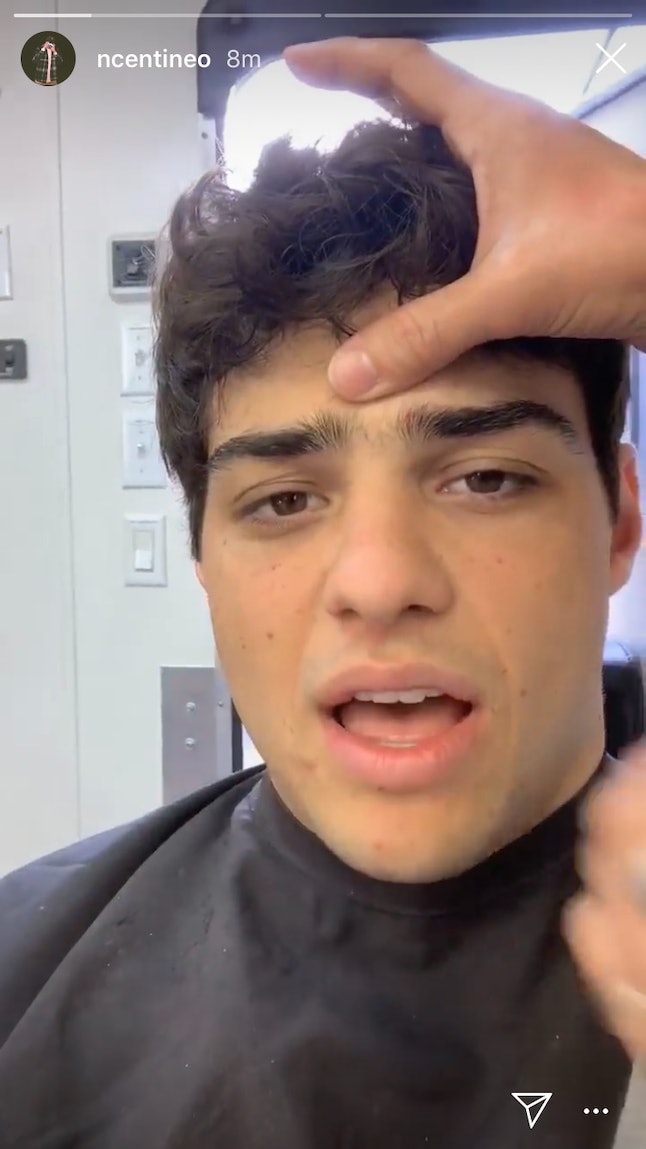 Condor and Centineo’s chemistry has long been one of fans’ favorite elements of To All The Boys, and the actress herself has talked about how they instantly clicked when they first hung out before making the film. In fact, their chemistry was so pronounced that Condor told Jimmy Fallon during an appearance on The Tonight Show in January that she insisted they sign a relationship contract of their own before shooting began. "We had just come back from a hot yoga class, and we went to his apartment and we ordered pizza," Condor explained. "It was right before we shot the movie, we were just trying to get to know each other, and I felt something. So I looked at him and I was like, ‘Noah, it’s not gonna happen between us.’"

As the actress explained, "I felt that, for the [film] to do well, we had to be best friend professionals, so I was like, ‘It’s just not gonna happen.’ And he said, ‘Yeah, it’s not gonna happen.’" In order to ensure that things stayed purely professional between them, Condor took a page out of Lara Jean’s book: "We kind of did what we did in To All The Boys… we made a contract and set boundaries, and I’m so happy we did that because the movie turned out great!" 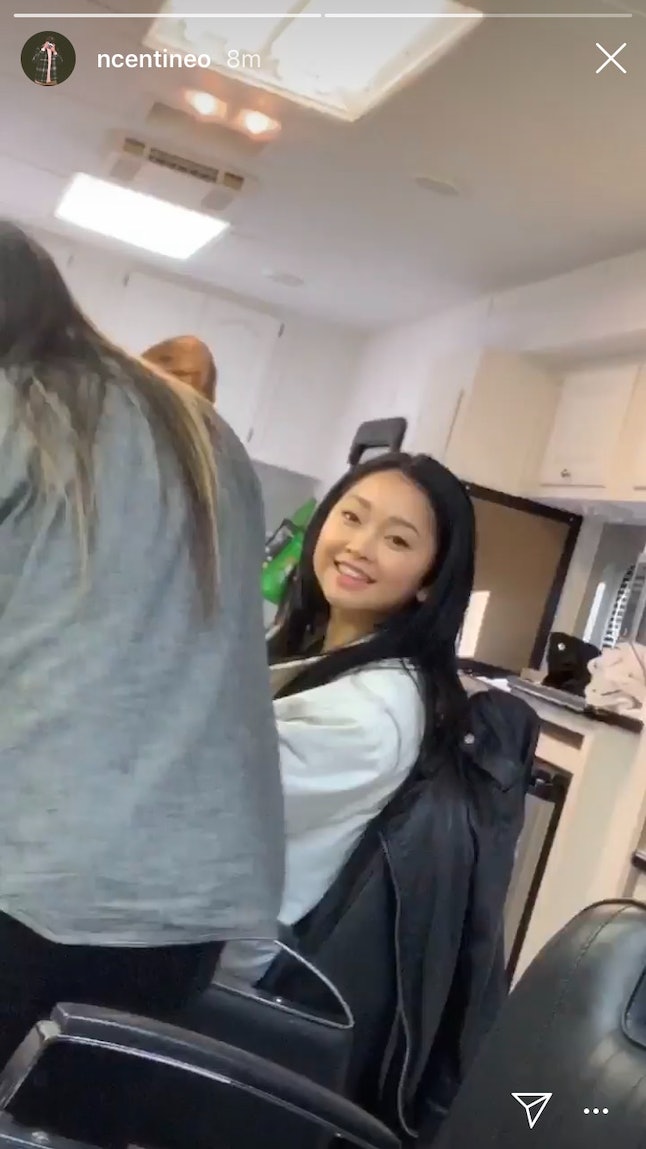 In addition to being the next installment of Lara Jean’s love story with Peter Kavinsky, the To All The Boys sequel promises that fans will see a brand new, more confident side of Lara Jean. According to Condor, she pushed for Lara Jean to stand up for herself more in the next film, telling Entertainment Tonight, "I think she grazed the surface on finding her own personal confidence towards the end of the first movie and I would love nothing more than for her to be a little bit more stand-up."

Speaking with the outlet back in January, the actress admitted, "I hope that in the second movie, and I’m going to strive for this, I hope Lara Jean doesn’t really take it or accept it when she’s treated badly. I want her to be like, ‘No, it’s not OK. You can’t talk to me like that.’"

Of course, Lara Jean’s stronger self-esteem isn’t the only major change happening in the second film; the To All The Boys sequel will introduce a new potential love interest for Lara Jean, in the form of her former Model UN crush, John Ambrose McLaren. "There’s nothing more fun than a love triangle," Condor told ET about the addition of John Ambrose. "The drama? I live for the drama!"

Let’s hope that the To All The Boys I’ve Loved Before sequel offers plenty of adorable moments between Lara Jean and Peter in addition to all of the potential new drama. After all, like Lara Jean herself, we’re suckers for a good love story.