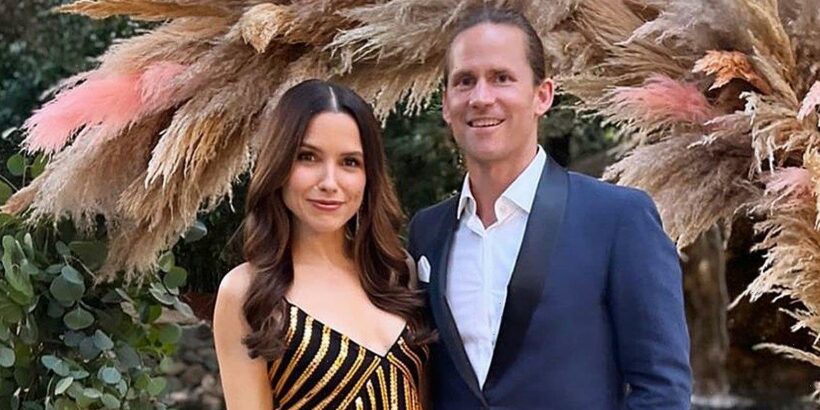 Wedding day bliss! Sophia Bush and fiancé Grant Hughes are officially married less than one year after getting engaged, Us Weekly confirms.

Bush, 39, and Hughes, 40, said “I do” in Tulsa, Oklahoma, on Saturday, June 11, multiple sources tell Us. The Tulsa County Clerk confirmed to Us that Bush and Hughes bought their marriage license on Wednesday, June 8, and returned the document on Monday, June 13.

They married at the Philbrook Museum of Art, which is housed in an Italian Renaissance-style villa built in 1927. The historic building is surrounded by 25 acres of gardens, the perfect backdrop for a magical wedding. The reception took place at The Church Studio, another source added.

“The buzz around town was Sophia Bush’s wedding at the museum. A lot of people in town heard it was going on,” a different insider tells Us.

Tulsa had quite a few celebrity sightings over the weekend due to Bush and Hughes’ star-studded guest list. Colton Underwood and his fiancé, Jordan Brown, who is friends with Bush, were also in attendance. The bride’s pal Aaron Paul stopped to take photos with fans throughout the weekend. Jensen Ackles and Jeffrey Dean Morgan, who are married to Bush’s former One Tree Hill costars Danneel Ackles and Hilarie Burton, respectively, were spotted getting some ink at Colour Studios Tattoo Shop the day before the nuptials.

“They were just two dudes trying to get some tattoos,” artist Daniel Gulick of Colour Studios Tattoo Shop exclusively told Us on Monday. “The wives were out having fun doing wedding things and they were out riding scooters around Tulsa. They wanted to get a tattoo and they stumbled upon my shop.”

The newlyweds were first linked in May 2020, with Hughes popping the question the following August. “So it turns out that being your favorite person’s favorite person is the actual best feeling on planet Earth 💫 #YES,” the OTH alum gushed via Instagram while announcing her engagement.

The businessman got down on one knee in Lake Como, Italy. “Forever Favorite,” Bush added in a second social media post, adding, “#engaged #Italy #HappyGirl.”

Bush called Hughes her “favorite human,” referring to her proposal as “the most incredible, moving surprise of my life.”

Since they were first spotted holding hands in Malibu in 2020, the twosome have kept their relationship on the down low. Shortly before the engagement news made headlines, Bush opened up about coming of age in the public eye — and the toll it can take on one’s dating life.

“It’s hard to have nothing that’s yours. And when you are a person who lives in the public eye, everybody wants to pick over everything and that can be really tricky,” the John Tucker Must Die actress told Entertainment Tonight in June 2021. “I also grew up in the early aughts when girls were raked over the coals for any choices that they made. And I just was like, ‘I don’t think I like this.’ I didn’t like having my private life lied about. There were times where someone would send through an article and be like, ‘Well, supposedly you’re dating this guy.’ And I was like, ‘I mean, I would. Who is he?’”

Before exchanging vows with Hughes, the Good Sam star was previously married to Chad Michael Murray for five months in 2005. The activist filed papers for an annulment in February 2006, citing fraud. While her petition was denied, the pair were granted a divorce that December. Bush later dated One Tree Hill alums James Lafferty and Austin Nichols before sparking a romance with her Chicago P.D. costar Jesse Lee Soffer.

“I’ve dated a couple of the wrong guys, but I’ve also had great love in my life,” the Incredibles 2 star told The Chicago Sun Times’ Splash magazine in January 2014. “I think every woman on Earth has dated the wrong guy at some point.”

One Chicago Casts’ Dating Histories: Who the Stars Have Dated in Real Life

After finding love with Hughes, however, Bush “largely” felt “great” about getting married again. “I think it depends on what people’s motivations are and I want to make sure — whether it’s myself or one of my best friends — that we’re clear on what it is we’re signing up for rather than thinking we’re getting some Kate Hudson and Matthew McConaughey rom-com life,” she explained on the “Inside of You” podcast in August 2021. “You know, this notion that you’re going to meet your person and they’re going to make you so happy that you’re going to be fulfilled and you’ll never be nervous again and you’ll never ever think anyone else is hot? Like, what? It’s such an absurd joke.”

The interview dropped just hours before Bush announced her engagement. “This. This place. The land of my past. Of my heritage. Of my mother, and hers, and hers before. Of Mario and his oxen. Basil grown in the garden. Wine made in the basement,” she wrote via Instagram at the time. “Comes my future. Him. Wine is our passion. We raise bees at home. We grow basil too. And now, tomatoes from Luca, Italy. In Los Angeles.”

She continued, “Our families’ pasts, overlap with our present. We see a future on the horizon. We choose it. Them, eventually. Ours. This day. Forever. I’m beaming. I never knew. Now I do. I know. This. You.”