Germaine Greer has criticised the definition of rape, arguing that women are confused about consent.

“If we agree that non-consensual sex is rape, then I can tell you it’s happening in every street, every night in every suburb,” she said. “It’s not rare, it’s not shocking and it is done with complete impunity because people don’t understand about the autonomy of people in a relationship.

“They don’t understand what it means to say no.”

Greer also told an audience at the Festival of Dangerous Ideas in Sydney on Saturday that women are not sure about consent. 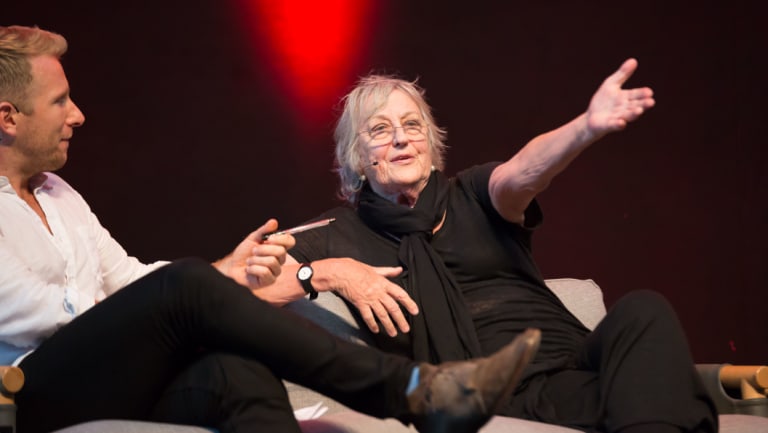 Moderator Hamish MacDonald and feminist Germaine Greer at the Festival of Dangerous Ideas on Cockatoo Island in Sydney on Saturday.Credit:Jodie Barker

The acclaimed and at-times provocative feminist was one of three speakers on the panel ‘Too Dangerous’ alongside law professor Ayelet Waldman and Megan Phelps-Roper, who grew up in the controversial Westboro Baptist Church.

The panellists discussed their experiences of self-censoring or being shouted down by what Phelps-Roper called “our own tribe”.

Greer described how feminists had sought to prevent her discussing the nuances of abortion. She also criticised the ABC for not broadcasting a debate about abortion in the 1970s.

Greer’s views on sexual assault saw her dis-invited from the Brisbane Writers’ Festival in July. But it was her comments about former prime minister Julia Gillard that provoked a reaction from the audience and fellow panellist.

Asked by moderator Hamish Macdonald about her comments about Ms Gillard’s physical appearance, Greer said: “Why is it a criticism to say she has a big arse?”

Asked by Macdonald if she thought it was a compliment, Greer shot back: “It’s the truth. What is wrong with you?”

Greer went on to comment about Ms Gillard’s wardrobe, saying she wore a wine waiter’s blazer that did not fit.

“I happen to be connected to a whole Jewish family of tailors,” she said. “For me, it was a real worry that the prime minister’s jackets never fitted properly.”

Greer defended her comments, saying: “I don’t have to be deadly serious all the time.”

Greer also said Ms Gillard’s career post-politics proved she had no power in comparison to former British prime minister Tony Blair, who has amassed a fortune and been an envoy to the Middle East.

Greer also made a connection between domestic violence and threats made by activists to disrupt her speaking engagements.

“I’m a member of sex that’s kept silent by threats,” she said. “I am used to this and I won’t wear it. You keep threatening, I’ll be there. If you want to kill me, kill me."