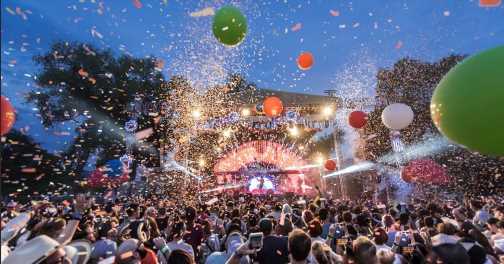 Expect more surprises — like weird circus acts, scavenger hunts, comedy — when doors open at 4 p.m. on Friday, Aug. 5, and 1 p.m. on Saturday, Aug. 6, and Sunday, Aug. 7. It’s located at 2323 Mulberry Place, where there’s little to no parking, so bike in or take advantage of RTD’s free bus and train fares this month. ticketmaster.com

Friday-Sunday. The stylized name of Denver’s [margins.] literary festival plays on its bookish goal of creating spaces for marginalized communities.

Conference director and celebrated Colorado writer Suzi Q. Smith will present the first in-person version of this 3-day book fair, conference and festival (after a virtual 2020 debut) with roughly 60 speakers and national names, Friday, Aug. 5-Sunday, Aug. 7, at McNichols Civic Center Building, 144 W. Colfax. The event is free and open to the public — and its virtual component is returning, too. thewordfordiversity.org/margins

Also this weekend: the Mimesis Documentary Festival, which takes a socially conscious and highly curated approach to its roster of films, wraps up its six-day run on Sunday, Aug. 7. The 20-plus programs — including screening blocks, workshops and more — at the third annual version are based at the Dairy Arts Center’s Boedecker Cinema, 2590 Walnut St. in Boulder, and on the University of Colorado Boulder campus’ B2 Center for Media, Arts, and Performance. Tickets are $12 per in-person screening ($10, or pay what you can, online), and $6 for artist talks (free online). Full-fest passes are $150. mimesis.eventive.org

Sunday. There’s a reason why singer-songwriters Angel Olsen, Sharon Van Etten and Julien Baker are among the most acclaimed indie artists of the last decade. Lucky for us, we get to see it this weekend as part of their Wild Hearts Tour, with opener Quinn Christopherson.

Their melodic rock and folk, mournful or anthemic as it may be, digs deeper into the heart with their alternately poetic and gritty lyrics and riveting voices. Originally scheduled for Sculpture Park downtown, this triple-threat concert was moved to RiNo Art District’s Mission Ballroom. Tickets for the all-ages show on Sunday, Aug. 7, are $56 in advance and $61 day of show. 4242 Wynkoop St. 888-929-7849 or axs.com