Boy George is stunned to learn his great-uncle was an IRA soldier hanged for his role in an attempted attack on a British police truck in 1921 on Who Do You Think You Are?

Boy George has learned the tragic tale of his great uncle with links to the IRA while delving into his family history on Who Do You Think You Are?

The Eighties popstar, who was born George Alan O’Dowd, travels to Ireland with the BBC show, where he learns for the first time how his great uncle Thomas Bryan had been an active member of the Irish Republican Army, and was charged with treason for his role in an attempted attack on a police truck in Drumcondra, Dublin, in 1921.

The pop star’s ancestor was 23 when he became one of a group of men executed at Mountjoy Prison and buried in unmarked graves on unconsecrated ground. They would come to be known as the ‘Forgotten Ten’.

Boy George, 57, was deeply troubled to learn how Thomas’ widow – the star’s great aunt – had been pregnant with Thomas’ only child at the time of his arrest, but that the child did not survive.

‘I’m proud and I’m sad. I think that is the best way to describe how I feel,’ he says. 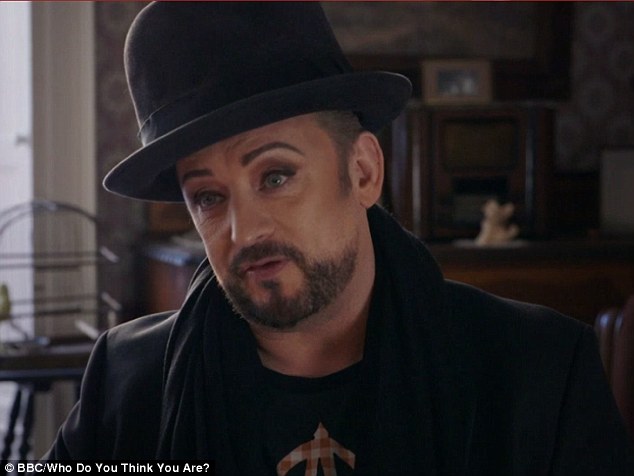 Boy George, born George Alan O’Dowd, traced his family history for BBC’s Who Do You Think You Are? 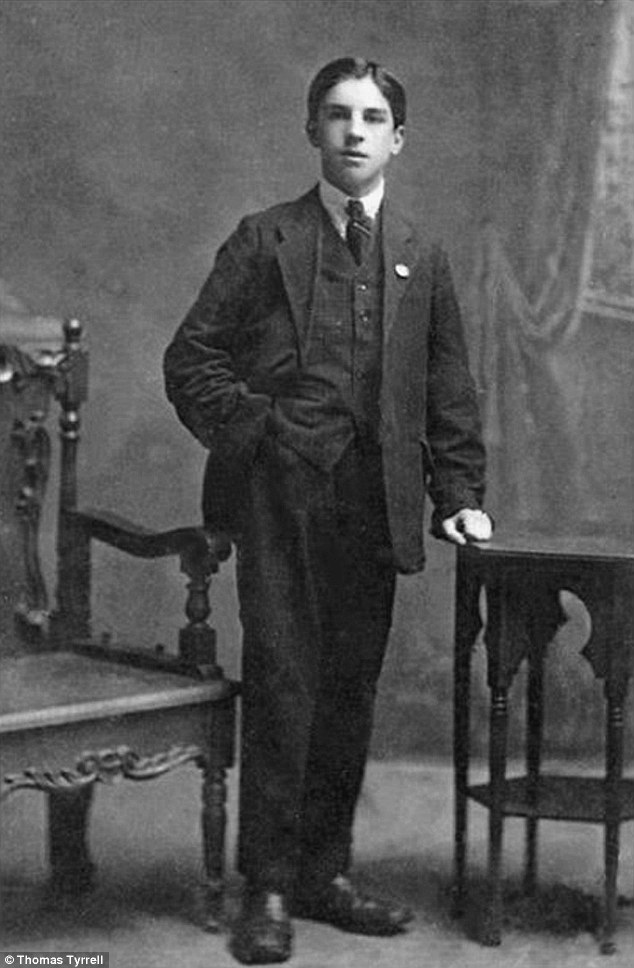 The Culture Club singer learned that his great uncle Thomas Bryan, pictured, was a member of the Irish Republican Army and had been executed after being charged with high treason

Following a campaign by the families that lasted some 80 years the Forgotten Ten, which also included Kevin Barry – the first Irish Republican to be killed by the British since the leaders of the Easter Rising in 1916 – were exhumed and buried with full state honours in 2001.

Boy George, who is a practising Buddhist, was born in London in 1961 to Irish parents Jerry and Dinah O’Dowd.

His maternal great grandfather Richard Glynn, who was in the British Army, married his brother’s widow Mary-Jane. Mary-Jane had a daughter, Annie, from her first marriage, who married Thomas.

Boy George had no idea that his great uncle was a member of the IRA, learning that Thomas had already spent time in prison when he was 19 before he met Annie.

The 1916 Easter Rising saw Irish Republican rebels launch a campaign to bring an end to British rule, but the British quickly put down the rising when it decided to execute its leaders.

Public mood swung behind the republican movement – especially young men like Thomas Bryan  – and he joined the secret army of Irish Volunteers that had formed.

The then teenager had been rounded up for taking part in a drill of the Irish Volunteers, the pre-cursor of the IRA. 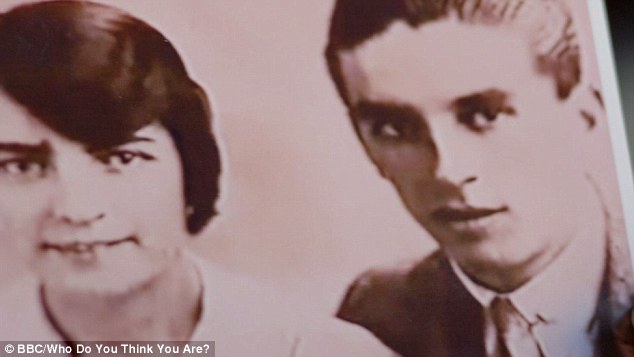 Thomas (right) left behind his wife Annie, who was pregnant while he was in prison, giving birth just days before his execution – tragically their child died after living for just one day

Thomas was an electrician and married Annie in 1921, but they were not destined for a happy ending as just four months later he was arrested and charged with high treason.

The freedom fighter had been found at a bridge across the river in Duncondra with a revolver and 20 rounds of ammunition on December 1, 1921.

He was part of a unit of IRA men waiting behind the balustrade to attack a police truck that was coming past.

Although nobody was killed, due to the Marshall Law Britain had imposed on Ireland after the Sinn Fein party kick-started a guerrilla campaign, the men faced serious consequences.

‘It’s amazing to think that my great aunt married Thomas Bryan and within four months he is arrested on very serious charges and is in prison,’ Boy George says on the show.

‘Her future must have been so uncertain at that point, but I imagine she knew what she was getting involved in.

‘Maybe that is what attracted her to Thomas? His passion… He was a very handsome man,’ he muses. 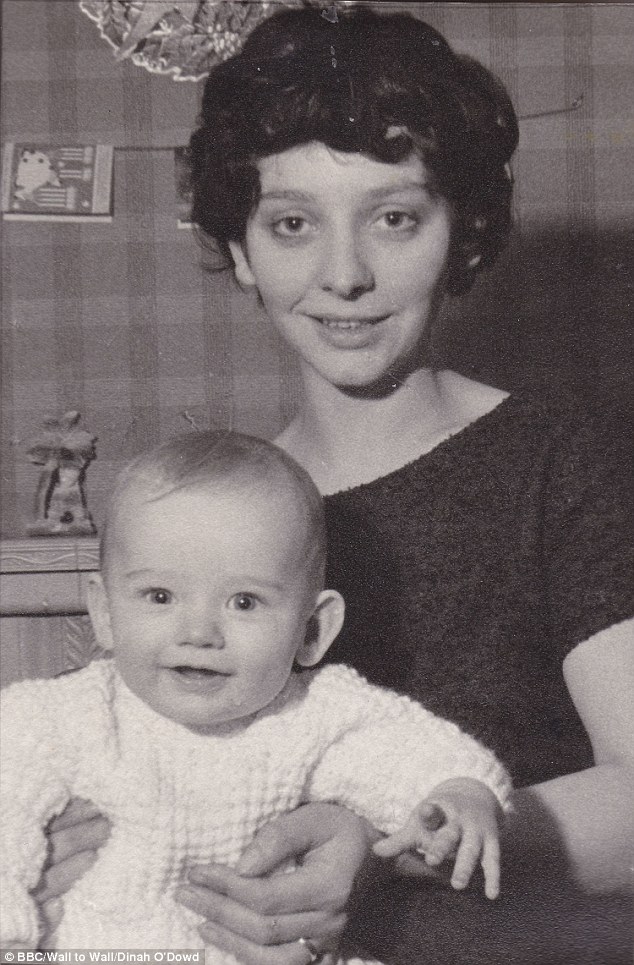 Boy George as a baby with his mother Dinah O’Dowd. He spends time with her in the programme speaking about their family history 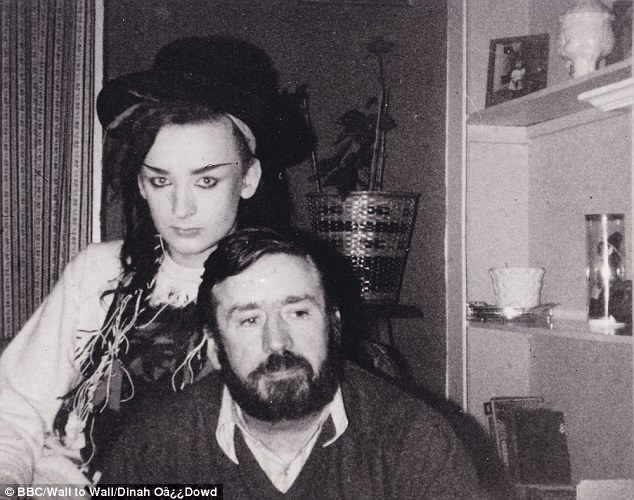 The eighties popstar pictured with his father Gerarld, who was married to his mother Dinah for 40 years before they divorced and he remarried in 2001. He died in 2003 of a heart attack 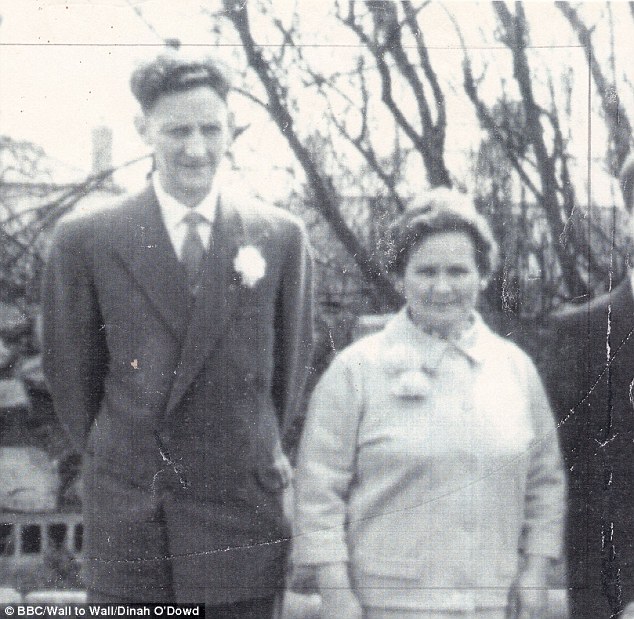 The musician pores over documents detailing his great uncle’s sentence – which he deems ‘hardcore’ – and is saddened to read a letter Thomas sent to his father-in-law Richard, upon learning of his impending death.

He reads aloud: ‘I have not told Annie my sentence because I do not know how to do so.

‘Personally I don’t mind death in any form but naturally my thoughts stray to my dear little wife as she truly said some time ago that it is the “women who suffer the most”. I wonder how she will take it.’

Boy George tells the cameras it is ‘overwhelming’ to read, and says that for Thomas ‘dying for a cause must be quite difficult’.

The hitmaker also visits the execution house, which has been preserved, where he blesses his ancestor with a Buddhist chant, before going on to visit his grave.

Originally Thomas had been buried in an unmarked grave within Mountjoy Prison walls alongside Patrick Moran, Frank Flood, Thomas Whelan, Thomas Traynor, Patrick Doyle, Edmond Foley, Bernard Ryan, and Patrick Maher as well as Kevin Barry who was executed the year before. 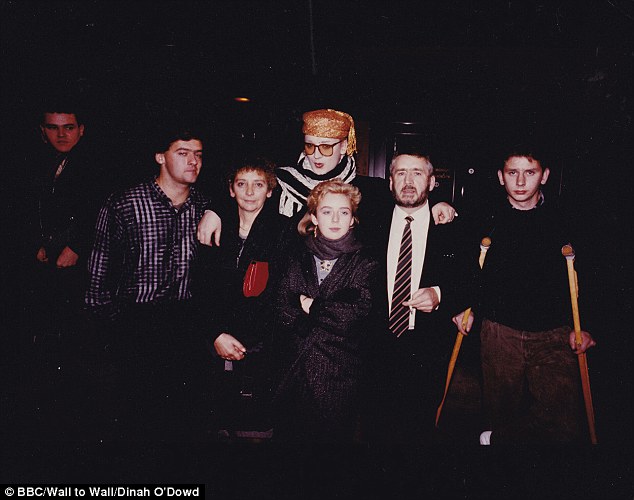 Boy George (back) with L-R his brother Gerald, Dinah, his sister Siobhan, his father Gerald and brother David

After 80 years of campaigning by the deceased families, the men known as the ‘Forgotten Ten’, were exhumed and reburied with state honours in 2001 by the Irish government.

Only one man Patrick Maher was not buried alongside his comrades on his and his family’s wishes.

Standing over the grave adorned with a Celtic cross, Boy George says of his great uncle’s role in Irish history: ‘It’s amazing to discover that this is part of my family history. That is incredible.

‘I’m proud and I’m sad. I think that is the best way to describe how I feel.’

After learning how his great aunt died nine years later of tubercolosis having never remarried, he reflects: ‘How much tragedy can you put into a story that is the saddest thing.

‘It’s such an incredible story and mad that no one has ever talked about it.

‘They will now, I will make sure they do.’

Who Do You Think You Are? airs on Wednesday 25 July on BBC One at 9pm

WHAT IS THE IRA?

The Irish Republican Army (IRA) are a republican military organisation who are seeking the end of British rule in Northern Island, the reunification of Ireland and the establishment of a republic.

It was created in 1919 and associated with left wing Irish republican party Sinn Fein.

During the Anglo-Irish war that followed, the IRA’s actions resulted in  two new political entities: the Irish Free State which was granted dominion status and Northern Ireland.

In the years that followed the IRA claimed responsibility for a series of bombings across Ireland, England and Europe.

In July 2005 the IRA announced the end of its armed campaign and promised to only pursue its goals using peaceful tactics.