Apple’s rotten trap: How one mother’s determination to gain access to her late husband’s digital photos to show their daughter how much he loved her resulted in a tortuous three-year legal battle with the tech giant

Matilda Thompson’s laughter is infectious. You can’t help but join in as, giggling, she swipes through photos on her mum’s iPad.

A picture of Daddy and her pretending to be lions? It was one of their favourite games, a test to see who could roar loudest.

An image of her and the kitchen covered in . . . something?

‘It’s smoothie!’ the effervescent ten-year-old shrieks. ‘I was using the blender myself and I didn’t put the lid on properly. Daddy had his suit on to go to work and he was covered.’ 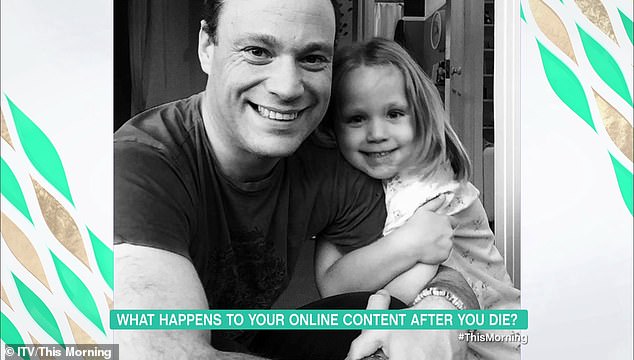 Rachel Thompson, 44, appeared on This Morning, described Matt as an amazing photographer, adding that it was one of his passions

It’s hard to keep up as she flicks her way through the memories and the milestones.

All of Matilda’s early life is here. Family ski-trips; swimming on holiday in the turquoise seas off Sardinia; the first horse-riding lesson.

There are videos, too. A determined little finger jabs ‘play’ on one and a cardboard theatre set looms into view. The handwritten sign on it reads ‘Daddy And Tilly’s Theatre’. 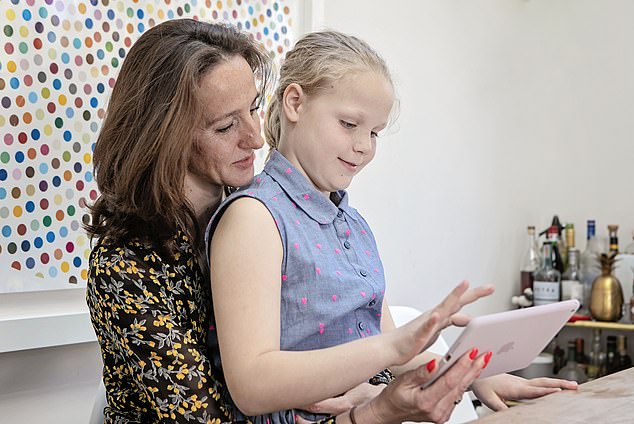 Overall, we see a father who would do anything for his child. Sometimes, though, Matilda goes quiet. She lingers over a picture of herself snuggled up to her dad in bed.

But all these pictures have a special and heart-breaking poignancy.

The ownership of this huge swathe of family history — comprising a staggering 4,500 photos and 900 videos — formed the basis of an extraordinary legal fight which concluded last week. 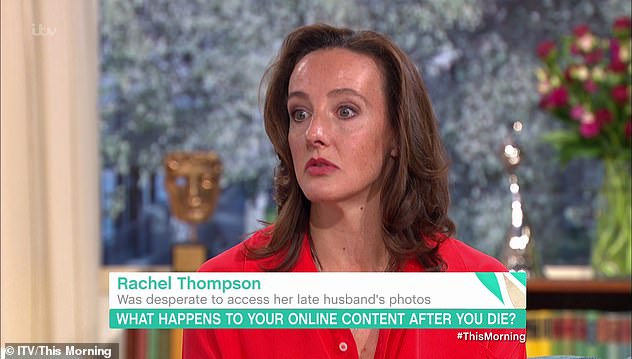 Sure enough, Daddy is doing the filming while Matilda bounces a ballerina across the stage. Another swipe brings up Matilda on her first bike, with stabilisers, the footage jerky as her dad runs to keep up. 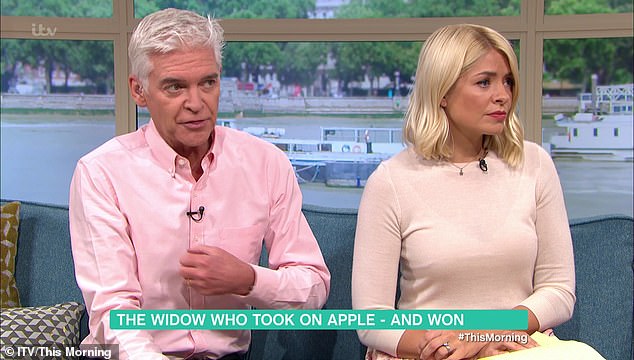 Hosts Holly Willoughby and Phillip Schofield sympathised with Rachel’s position, admitting that they hadn’t even thought about passing on their digital lives in the event of their death

Devastatingly, Dad Matt died in July 2015, aged 39. He did not leave a will, which meant that his entire estate passed on to Matilda’s mum Rachel, 44.

That estate, she assumed, included the photos he had amassed over the years. But there was a problem. Like so many families, they had entrusted the safe-keeping of these photos to ‘iCloud’ — an online storage service controlled by Apple.

And when Rachel tried to log in to Matt’s Apple account, she was denied access. To her horror, she discovered that ownership of all these treasured pictures reverted to Apple on Matt’s death. 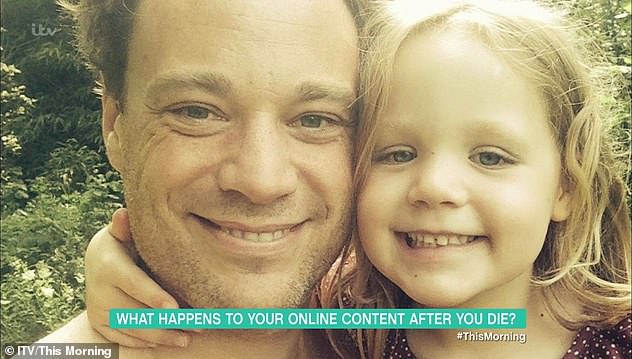 During his life, estate agent Matt took thousands of photos on his iPhone charting their relationship and Matilda’s early childhood

To put it bluntly, she found that she and Matilda were completely unable to access even photos of themselves.

Apple’s terms state that user accounts are non-transferable and that rights to content ‘terminate’ on death unless otherwise required by law. The firm must obtain a court order to transfer accounts to a user’s next of kin — an expensive and lengthy process.

In this case, Apple said it would only release 4,500 photos and 900 videos under a court order as, under a UK law that clearly needs urgent updating, the loved ones of people who die have no legal right to access information in their online accounts. 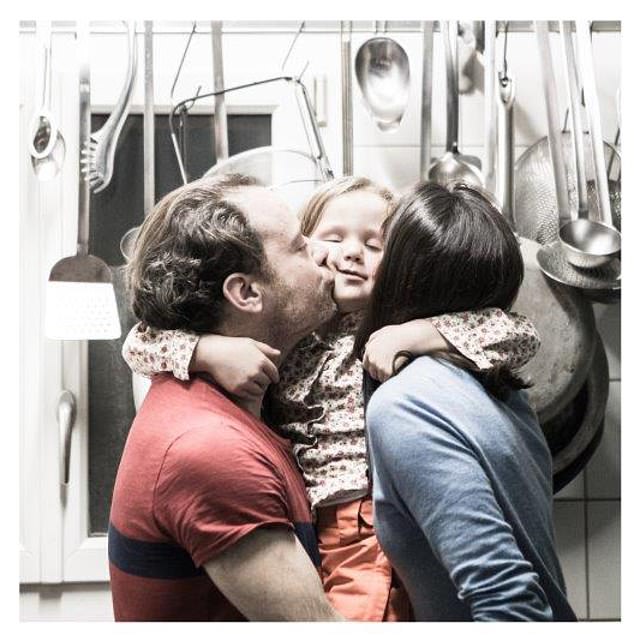 Rachel’s initial attempts to access her husband Matt’s photos of them and daughter Matilda, after he took his own life in July 2015, were rebuffed by the American company. Pictured: One of Matt’s stunning shots

Matt had not specified what access others should or should not have to his account after his death. His Apple account also contained old photos of Rachel’s father, who died 18 months after her husband.

Her legal fight took almost four years, and would have cost thousands of pounds in legal fees had Rachel’s legal team not agreed to work for free. That she and Matilda are now able to flick through the pictures is evidence of her eventual success.

A court order forcing the U.S.-based technology behemoth to hand over the images was acquired at the Central London County Court last week, with Judge Jan Luba calling for a simpler way to settle such cases.

Legal experts also urged that companies should owe a ‘digital duty of care’ to grieving families.

Rachel says: ‘All I ever wanted was to be able to provide Matilda with images of her father, images that proved how much love he had for her. So many of us just don’t think about the implications of having our entire lives on our phones.’

From her daughter’s first birthday, the majority of photos of her were taken by Matt.

Scrolling through the Thompsons’ life in happier times is a moving experience. This was so clearly a family who seemed to have everything.

Rachel and Matt met when she was studying at St Andrews and he came to visit a friend. They married ten years later, both settling into high-flying jobs in the property industry, working for rival estates agents in London. Today, Rachel runs her own property company. 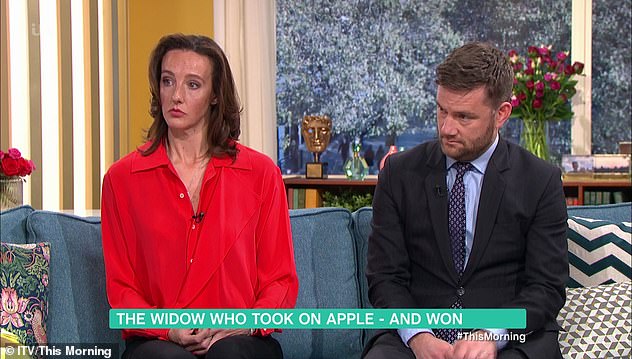 Eventually Rachel enlisted the help of solicitor Matt Himsworth, pictured right, who pointed out how ‘very difficult’ it is for a member of the public to pursue this order by themselves

They travelled the world and set up home together in affluent Chiswick, West London.

Baby Matilda was born in 2009, and overnight Matt turned into a devoted Dad, teaching his daughter to swim, ride a bike and plant seedlings.

They were, it seemed, a solid unit. On her first day at school, both Mummy and Daddy were there at the gates. Rachel recalls: ‘Everything we did was for Matilda.’

So Rachel was devastated when the couple later separated and he moved out.

She thought it was a mid-life crisis. They had counselling, with a view, she thought, to reconciliation. ‘I thought he’d come back,’ she says bleakly.

In many ways, he hadn’t gone. He retained his key and returned to the family home every day, to see Matilda and often put her to bed. They continued to holiday as a family.

‘We wanted Matilda to see we were still a family.’

Then tragedy descended. Less than a year later, Matt tragically took his own life. One Monday morning in July 2015, Rachel answered the phone as she drove into her office parking space.

It was Matt’s dad. ‘I knew from his voice that something was terribly wrong. “Matt’s dead,” I was told. I remember walking across Knightsbridge in floods of tears, unable to breathe. I walked into my office and collapsed on the floor, completely hysterical.’

She is understandably reluctant to go into the exact circumstances of what happened in Matt’s final days, for Matilda’s sake, but she did not attempt to sugarcoat his death to a then six-year-old Matilda.

‘I told Matilda her Daddy had chosen this. He had a blackness around him and he’d had to decide if he could live with the blackness. And he decided he couldn’t.’

But Matilda’s response was heartbreaking. ‘She said: ‘But I’m not the black. I was the light. I could have helped him’. 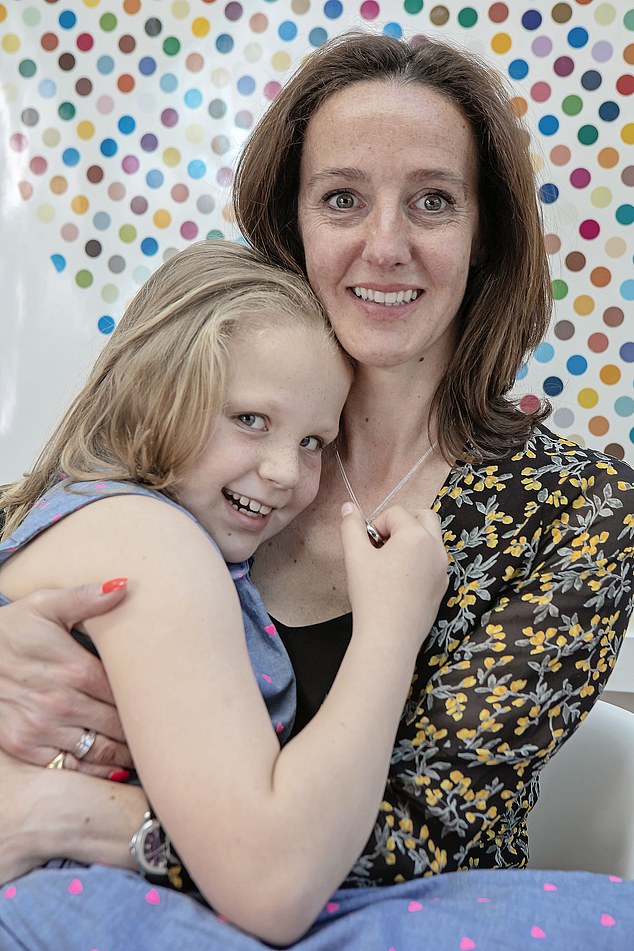 Apple said it would only release 4,500 photos and 900 videos under a court order as, under a UK law that clearly needs urgent updating, the loved ones of people who die have no legal right to access information in their online accounts

‘I had to say ‘not at that moment, Sweetpea’, but maybe she was right. Maybe if he’d phoned her, heard her voice …

Whatever drove Matt down this awful path, at the core of her legal battle was a simple wish to have evidence of his love.

‘He adored her. He worshipped her. These pictures, they show that.’

Whatever hell she was in, Rachel busied herself organising her late husband’s affairs, cancelling his driving licence, sorting his pension, informing all manner of authorities.

‘I wrote everything down, kept copies, had numerous copies of his death certificate. There is so much paperwork.’

But when it came to securing his memories, paperwork was the least of Rachel’s problems. All Matt’s gadgets — laptop, iPad, phone — were now hers and she steeled herself to look at his photos.

‘I’d known his password before, but it didn’t work. Maybe I’d got it wrong, maybe he’d changed it.’

When she was in town, she popped into the Apple Store and asked for help. ‘I had the death certificate. I really thought they’d just reset something. But they said I needed to speak to their office in Ireland.’

And so the tortuous process began. At first Rachel was told that she needed to get her solicitor to apply for probate before Apple could help. But when she did that, she was told she would actually need to apply for a court order.

She despaired to friends and even admits trying to bypass the law, asking one who works in security to try to hack into Matt’s phone.

Most people would have given up by now. Why not her?

‘Because it wasn’t fair,’ she says. 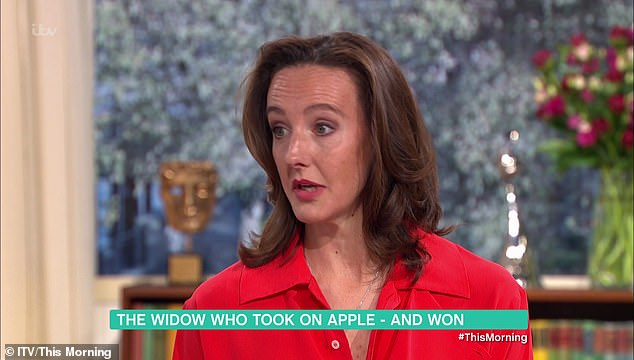 By chance a friend happened to mention Rachel’s predicament to lawyer Matt Himsworth, who was intrigued by the legal implications and offered to represent her pro bono. He instructed a barrister to first argue that, as a subject of the pictures, Rachel could claim copyright. But this approach failed. Backwards and forwards the case went until a court order forced Apple to concede.

‘I don’t want to paint them as ogres, because they weren’t. It was just there is no legal framework for all this. The law has to catch up.’

It certainly is a minefield. Even telling your loved ones your passwords isn’t necessarily the solution.

‘Legally, any contract with Apple is untransferable, so even if a deceased has written their password in a will, you will be in breach.’

Rachel admits she was particularly nervous about looking through the photos Matt had taken since their separation. ‘I knew there was the chance of finding something . . . inappropriate, that would raise questions he wasn’t there to answer. But I was so relieved when there was nothing.’

Indeed, it is the pictures taken in the weeks and days before Matt’s death that are most upsetting.

For example, there is Matilda blowing giant bubbles, laughing with exultant joy. Then there are pictures of the three of them, sharing a final cuddle.

Matilda remembers the very last picture being taken by her father. It shows her in the back seat of the car, coming home from school with the class teddy bear, her charge for the weekend.

For her part, Rachel is pleased that she won the case against Apple because others hopefully will benefit.

‘It’s so important that we have such memories to help us grieve and not forget them,’ Matilda says as Rachel tries not to cry. ‘I mean, we don’t forget them, but we might forget what they look like. Or forget the day something nice happened.’

Rachel gently interrupts, suggesting that maybe this is enough pictures for today. As Matilda skips off, she sets down the laptop.

‘I don’t know how often she will look at the photos and videos. It may be that she looks at them now, then doesn’t want to again for ten years. That’s fine.

‘But, crucially, those memories are hers, and no one should be able to take them away from her. And they are priceless. Priceless to us, but meaningless to a technology giant such as Apple.’

For confidential support call the Samaritans on 116123 or visit a local Samaritans branch, or see samaritans.org for details.