A guest argued the nation should ban wrapping paper and rent trees in favour of a green Christmas on This Morning today.

In today’s episode of the ITV show, presenters Phillip Schofield and Holly Willoughby asked that as concerns for the environment increase – is it time to consider an eco-friendly Christmas?

It comes after campaigners including Emma Thompson have been encouraging people to ban cards, stop using wrapping paper and even rent Christmas trees.

While ‘Friends of the Earth’ supporter Claire Oxbury argued we need to be more eco-friendly, Georgina Fuller suggested we should stay decadent during the festive season.

And viewers were quick to take to Twitter in agreement with the latter – with some sarcastically joking Christmas should be cancelled altogether.

‘Cancel Christmas! Don’t go out! Everyone will get sick! Don’t wrap presents! AAAARGGH!!’ wrote one angry viewer, while another penned: F*** it. Cancel Christmas. Everything else is getting cancelled might as well cancel Christmas too. Elf on the shelf? Elf in the bin.’ 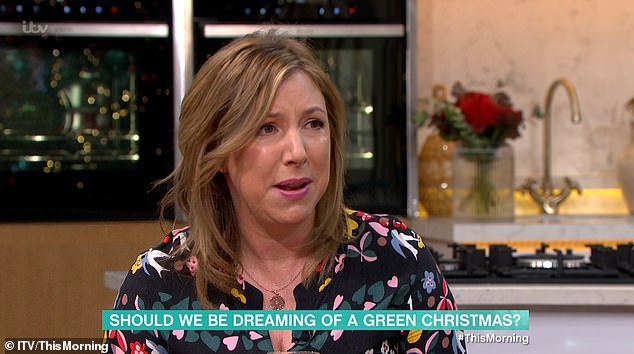 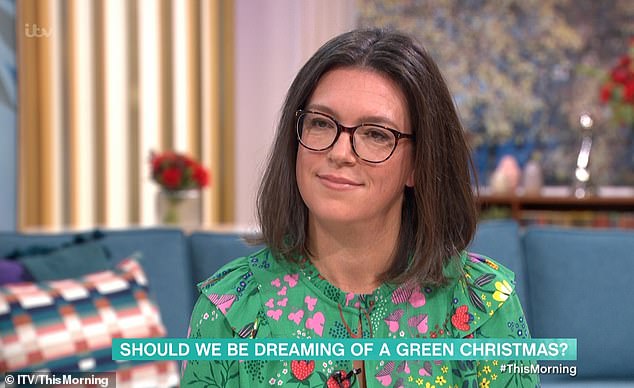 Claire Oxbury (pictured), a ‘Friends of the Earth’ supporter, disagreed and said we need to be more eco-friendly this Christmas

One angry viewer sarcastically penned: ‘Cancel Christmas! Don’t go out! Everyone will get sick!’

A third agreed: ‘Oh p*ss off. We’ll be wrapping Christmas presents up in recycled bog roll next,’ while a fourth added:

‘So, save the environment by refusing to buy plastic toys for your kids at Christmas. Now here’s Alison Hammond, who we’ve flown to the Maldives, just to present a 30 second promo for our latest bent £5 /minute phone-in competition.”

Another argued: ‘Oh yes, let’s save the planet by banning everything on the ONE DAY we all get together to #bekind.’

When asked by presenter Holly Willoughby of her typical Christmas, Georgina explained: ‘We love Christmas and have a very traditional one. We have a big tree. We don’t like plastic trees.’

‘We do buy a tree but we use it for firewood afterwards. We have fairly lights, lots of decorations, presents and friends over.’ 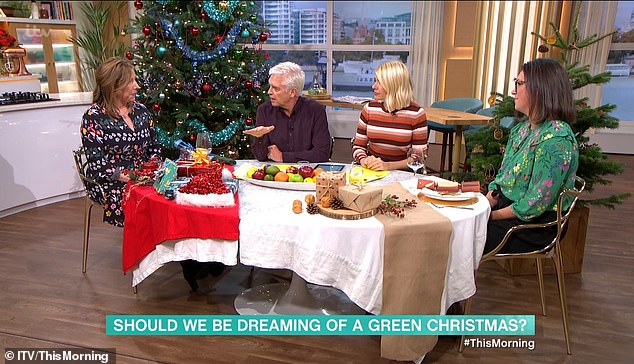 Phillip Schofield (pictured) explained how around seven million Christmas trees end up in landfill in the UK every year which accounts for 100, 000 tones of greenhouse gasses

One annoyed viewer argued: ‘Oh yes, let’s save the planet by banning everything on the ONE DAY we all get together to #bekind’

She went on to say how for eleven months of the year, her family are environmentally -friendly.

‘As with everybody, we’re concerned with recycling and are very environmentally conscious,’ she said. ‘But we let ourselves at this time of year it’s not something I want to be worrying about. I don’t want to take the joy out of Christmas.’

And many who tuned in seemed to agree with Georgina’s views and argued we should let go during the festive period.

‘Green Christmas? No, are we not allowed one day where we don’t think about going green,’ argued one, while a second penned: ‘Christmas we get pressured for months to buy load of cheap plastic c*** then made to feel like s*** for ruining the environment.’

A third wrote: ‘We’ve had the same Christmas tree for 18 years and decorations,’ while another similarly told: ‘I have two plastic Christmas trees that I’ve had for over 10 years. Should I now throw these out and cut down a tree instead?’

A further added: ‘I don’t send Christmas cards and we’ve had the same tree for about 20yrs…’

Meanwhile, Claire had a completely different opinion and suggested there are inexpensive ways of helping the environment.

‘Again, we have two small children and want to make Christmas fun for them but there are ways to do that and still be environmentally friendly,’ she explained.

‘With the wrapping paper you can make your own using twine, buying paper that can be recycled afterwards. Again, with cards, making your own, and reusing things for next year.’

She added: ‘One of the big issues at Christmas is that we generate 30 per cent more waste than at other times of the issue and that’s all waste that’s been produced and has to be disposed of and so that needs to be tackled.’

Phillip Schofield went on to say how around seven million Christmas trees end up in landfill in the UK every year which accounts for 100, 000 tones of greenhouse gasses, so the suggestion is you rent your tree.

‘This is such a fantastic idea,’ said Claire. ‘You get the joy of the real tree and after Christmas it goes back to the nursery, they look after it for another year, and then in some cases, the next year, you can the same tree back again.’

And there were a select few who were keen to offer their own advice on how you can be environmentally friendly this Christmas.

‘How about don’t send Christmas cards? Have social media,’ wrote one, while another commented: ‘I use the same wrapping paper for Christmas and birthdays

A third wrote: ‘I personally think that it’s so important to be eco-friendly all year round, not just at Christmas,’ while a further added:

‘We are having an eco-friendly Christmas and I cannot wait to celebrate the festive time.