Ever since the death of their mother, they have been linked inextricably, not just in the public consciousness but across the royal stage.

As boys, William and Harry were inseparable, finding solace in one another as they coped with the shattering loss of Princess Diana and later sharing in each other’s dreams and successes as adults.

William’s marriage to Kate eight years ago contributed barely a quiver to this remarkable relationship as two became three. The arrival of the Cambridges’ children George, Charlotte and Louis served only to strengthen the fraternal bonds. 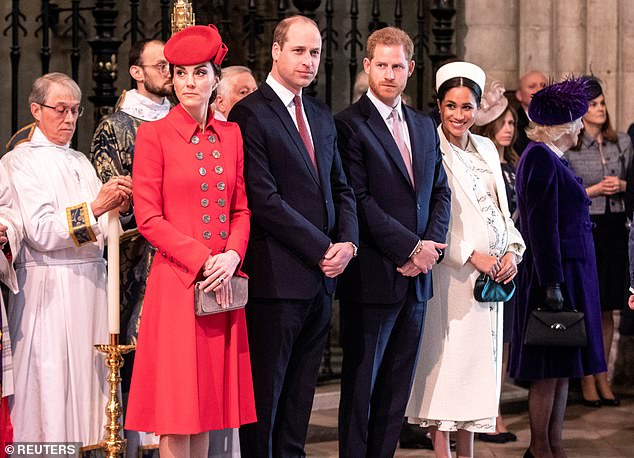 A split in the family: Kate, William, Harry and Meghan. This week, both women put on an impressive show of companionship and friendliness at the Commonwealth Day service

But now with the news that the brothers are to set up their separate households there is a parting of the ways. Many will seize on the split as evidence of a so-called froideur not just between the sisters-in-law but also between William and Harry.

In fact, the ending of a double act which has not only helped bring stability to the monarchy but showered it with popularity has been inevitable from the moment it was announced that the Duchess of Sussex was pregnant.

The creation of separate courts reflects the boys’ changing responsibilities. It is the clearest sign yet that William is destined for the throne and thus inevitably pushing his brother to the margins of royal life.

It happens to every generation. Nearly 40 years ago, it happened to Prince Andrew. For the first 22 years of his life, he was a heartbeat away from the crown as next in line after his brother Prince Charles.

Then, when the Prince and Princess of Wales began their family, his importance receded. By the time Andrew married and had children, he had been relegated down the line of succession. 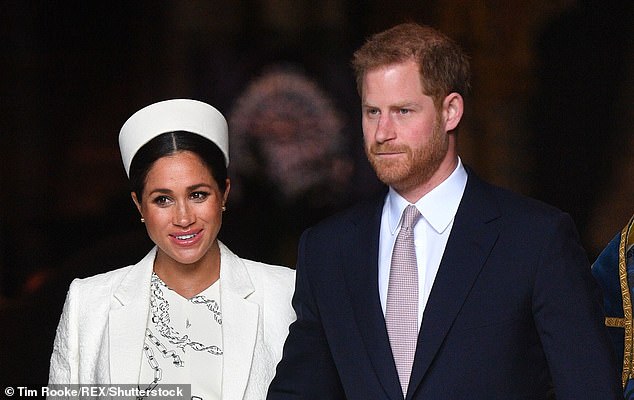 Harry, meanwhile, will complete his departure from Kensington Palace – his former childhood home, don’t forget – by establishing his court at Buckingham Palace, removing himself completely from his brother’s sphere [File photo]

But with William and Harry it was somehow different. Their closeness in age meant that they were often seen together. Then there was the unique way in which they were raised.

Diana refused to allow the usual protocols of favouritism to take root. She instructed courtiers, servants and other members of the Royal Family that the boys were to be treated identically.

She insisted that when important photographs were taken of future king William, his younger brother was also in the picture. She even made a point of bringing Harry to William’s first day at Eton so they could be photographed together and he wouldn’t feel left out.

Diana was anxious for Harry to be included in everything. She wanted him to avoid the traditional fate of the second-son ‘spare’ in the Royal Family – left without a significant role while both position and estate (income from the Duchy of Cornwall as Prince of Wales, and from the Crown Estates as sovereign) went to the first-born son.

When she learned that the Queen Mother treated William more favourably, she asked her, forcibly, not to.

Such a determinedly modern approach to parenting helped ensure that when the boys faced the terrible tragedy of her death in Paris 22 years ago, they had each other to rely on. It has been that way ever since. Until now.

Inevitably, the split will be seen with sadness. As William and Harry – or just ‘the boys’ – they have been indivisible and the public have loved this royal double act. But the fact is, this separation had to happen sooner rather than later.

As the Queen’s reign nears its end and Prince Charles prepares for the throne, William, with Kate at his side, has to make a great leap forward.

There can only be one Prince of Wales. It is not a role that can be shared. William, after all, is going to be top dog.

We might have expected their break to have come sooner – last May for example, when Harry and Meghan were married. But they found three were better as four and the wow factor of two glamorous young royal couples convinced aides that it was worth persisting with for a little longer. 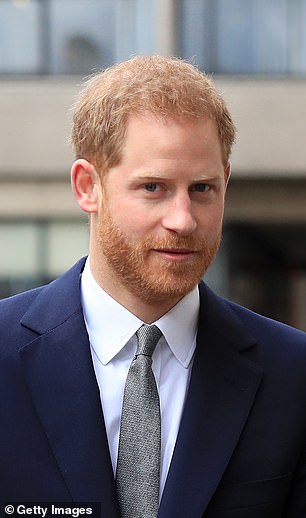 Diana was anxious for Harry to be included in everything. She wanted him to avoid the traditional fate of the second-son ‘spare’ in the Royal Family

But with Meghan’s pregnancy and the Sussexes’ planned move to Windsor, a formal split became imperative. It will, of course, raise questions about what really is going on between Kate and Meghan, against the backdrop of reported tensions.

This week, both women put on an impressive show of companionship and friendliness at the Commonwealth Day service. It was designed as much as anything to dispel those rumours.

But issues surrounding Meghan’s troubled relationship with her father, and the controversy over a US magazine interview in which the duchess’s friends sought to set the record straight, will only add to speculation about this split.

The separate courts will mirror their divergent interests. William’s key staff have a background in government and it represents a coming of age for the prince, who will be 37 in June.

Harry, meanwhile, will complete his departure from Kensington Palace – his former childhood home, don’t forget – by establishing his court at Buckingham Palace, removing himself completely from his brother’s sphere.

It is a sign that he is following in the footsteps of Princess Anne, Prince Edward and Andrew, who, in earlier times, ensured their independence from their elder brother’s influence.

For William, the future is assured. Harry, however, is at something of a crossroads. He has been here before, of course – when he quit the Army – but this time he has a wife at his side and is about to become a father.

It will now be up to him to forge a royal role beyond the shadow of his big brother.