HRH hand-me-down! Thrifty Kate is ALREADY dressing Prince Louis in his siblings’ clothes – as she continues the trend of putting her children in second-hand looks

The Duchess of Cambridge is a fan of recycling favourite looks – and she is already taking the same approach when it comes to her youngest son’s wardrobe.

The touching photographs, taken by the duchess, show Louis in the arms of Charlotte, who is herself dressed in a second-hand look – a navy blue cardigan once worn by Prince George, four, for a Vanity Fair photo shoot. 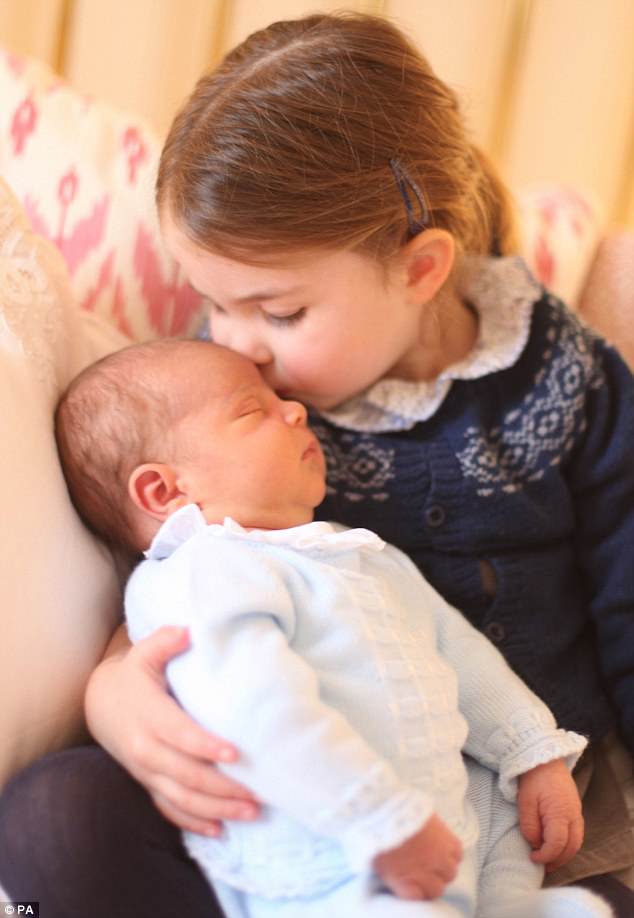 His sister’s jumper: The Duchess of Cambridge, 36, dressed Prince Louis in a matching cream jumper and trouser set previously worn by his sister Princess Charlotte for his first portraits 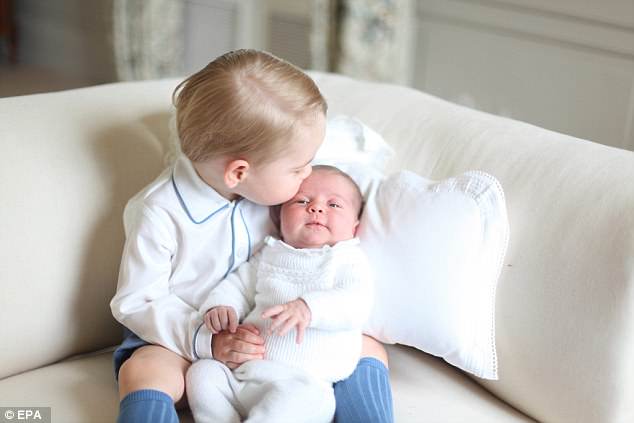 Little princess: Charlotte wore the soft outfit as an infant for her own first portrait with Prince George, pictured. The matching set by Irulea is now called the Princess Charlotte set 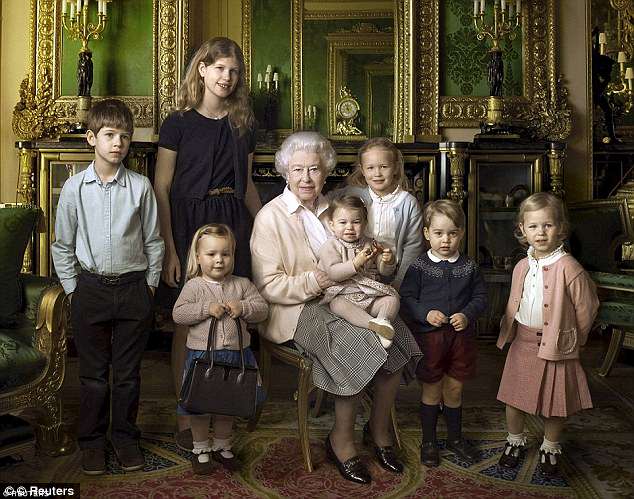 It is likely to be the first of many hand-me-downs Prince Louis will receive from his royal relatives as Kate continues the tradition of reusing her favourite children’s clothes.

Designer Rachel Riley, whose clothes have been worn by George and Charlotte, said  shortly after Louis’ birth that it was likely he would be given hand-me-downs.

‘We often see the Duchess of Cambridge wearing her favourite pieces over again, and her children have worn the same outfit for different occasions too,’ she told FEMAIL.

‘In fact, we have seen Prince George wearing the same outfit that Prince William wore, and of course, both children have been christened in the same christening gown.’ 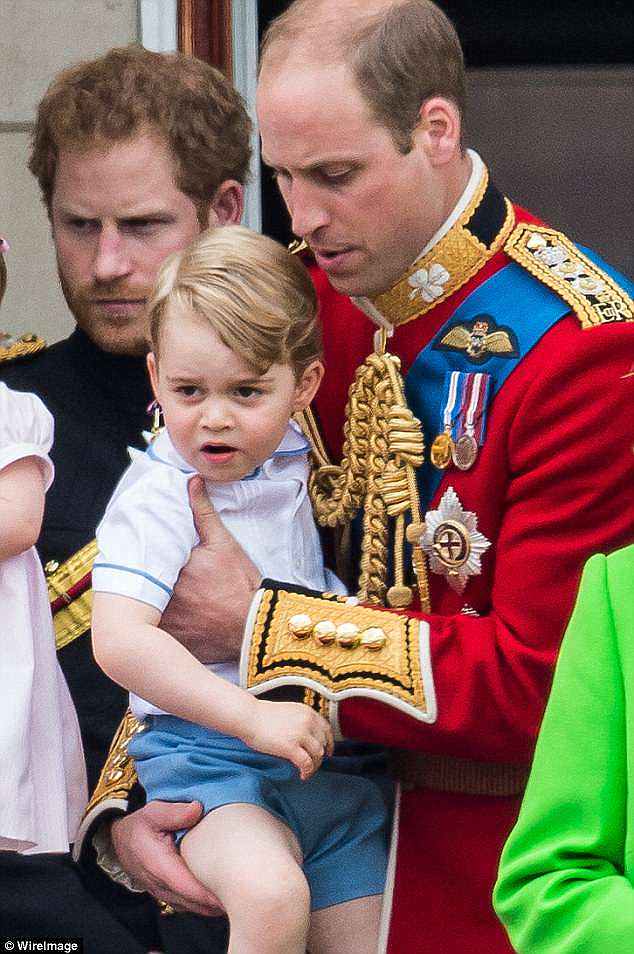 His father’s shirt: Prince George wore William’s shirt and shorts for Trooping the Colour in 2016 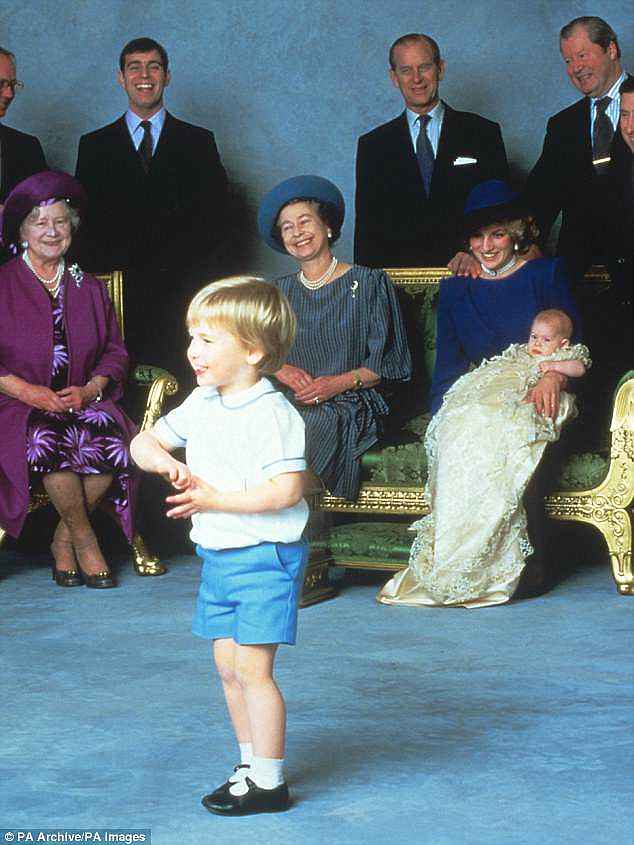 Childhood favourite: Prince William in the same outfit at Prince Harry’s Christening in 1984

Kate and William, 35, presented their new arrival to the world in a shawl from GH Hurt and Son Ltd – after opting for similar shawls for George and Charlotte when they were taken home from the hospital.

George has been spotted in a couple of outfits handed down from his father in the past, including a blue romper suit he wore at the Trooping the Colour ceremony in 2015, just before his second birthday.

William wore the same baby-blue romper suit his dad wore at the same ceremony at Buckingham Palace in 1984. 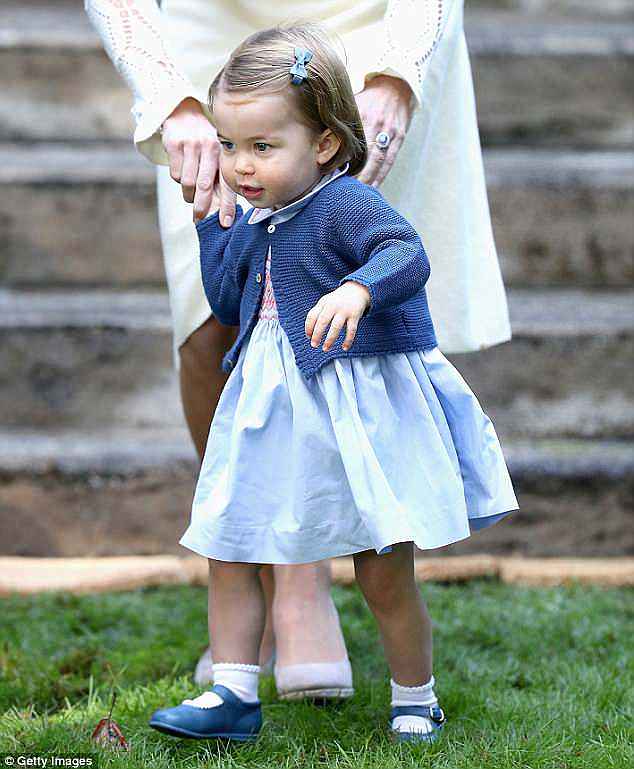 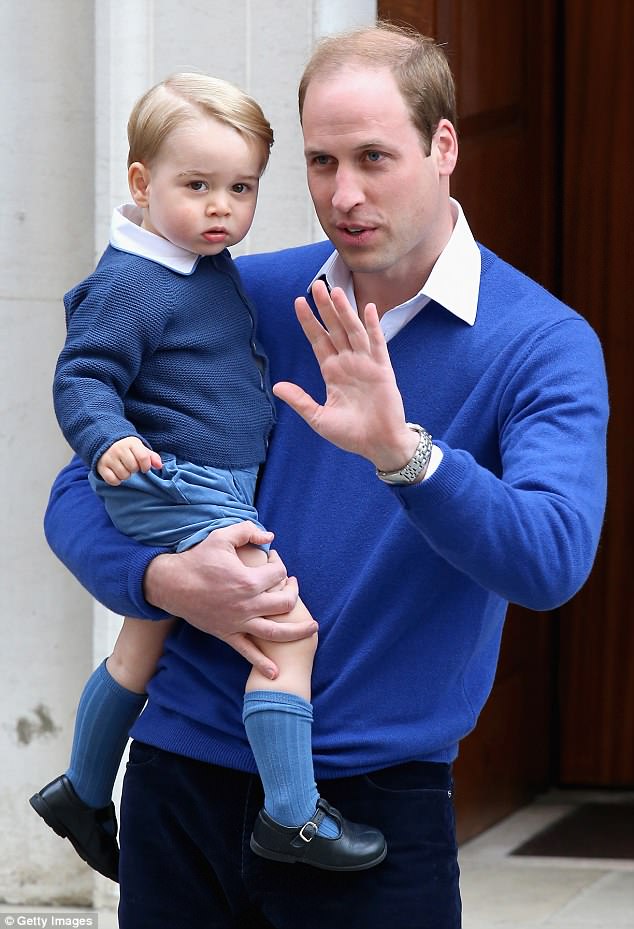 Firm favourite: George in the same cardigan by British brand Amaia when visiting Charlotte in hospital in 2015

Young George has also been pictured in the same peter pan collar shirt and blue shorts that his father wore when he was a youngster.

Meanwhile, Charlotte has also been spotted in hand-me-downs from her big brother, including a blue cardigan worn by George when he went to meet his baby sister in hospital in 2015.

Charlotte wore the same cardigan by British brand Amaia during a visit to Canada the following year.

The young princess has also been pictured wearing older hand-me-downs from her uncle Prince Harry. 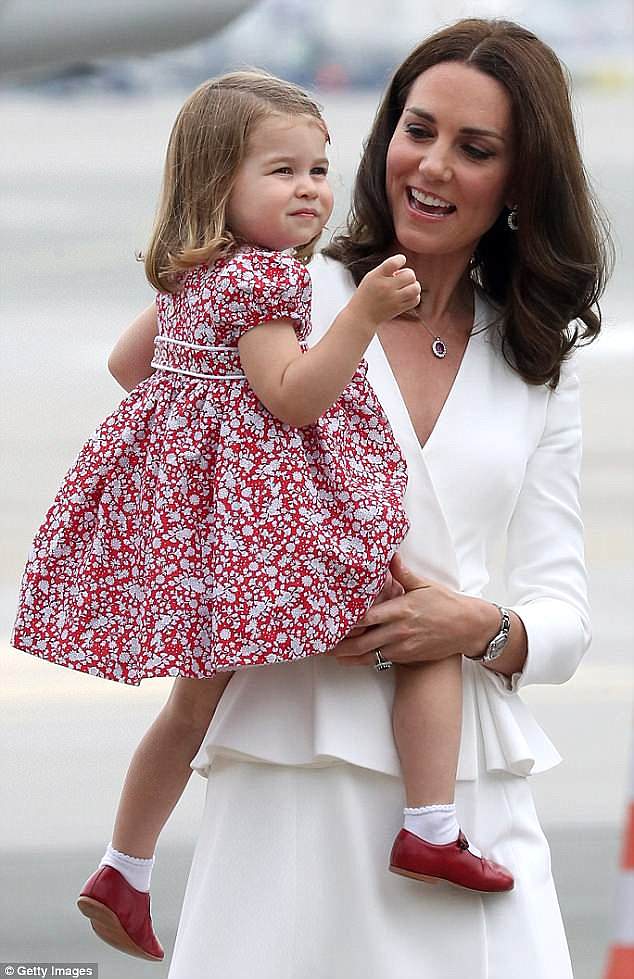 Her uncle’s shoes: Princess Charlotte wore a pair of Harry’s red buckle-ups in Canada in 2016 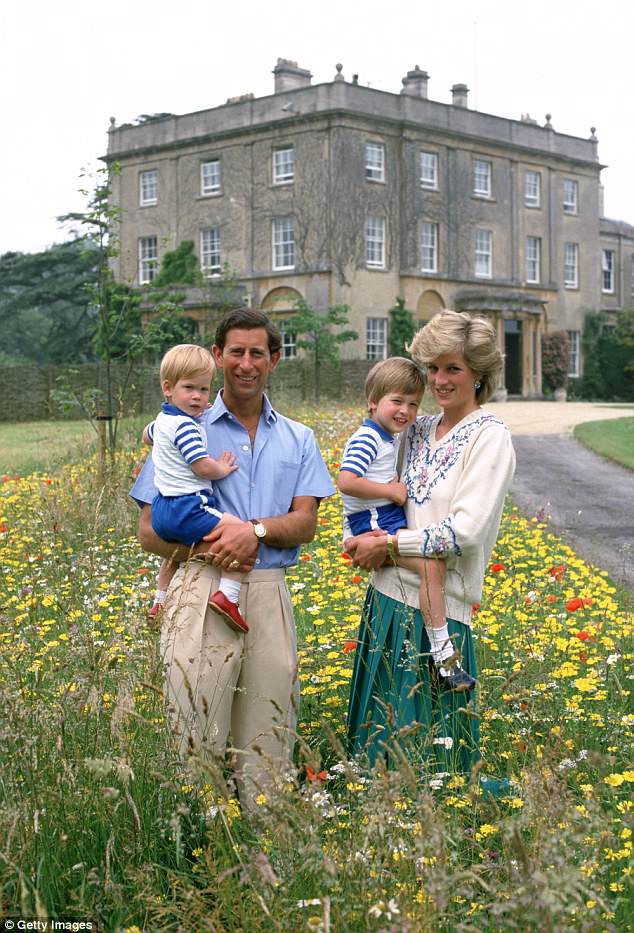 Well-loved: Prince Harry, left, wore the same shoes for this family picture at Highgrove in 1986

Charlotte wore a pair red shoes in Warsaw last summer that Harry had worn as a child in 1986.

The Duchess of Cambridge is known for recycling her own looks, including her maternity wardrobe.

A source has previously revealed how the new prince’s new nursery will also feature items from when Kate and William’s elder two children were babies.

The insider revealed to Us Weekly: ‘It will be filled with hand-me-downs and George and Charlotte’s old toys.’ 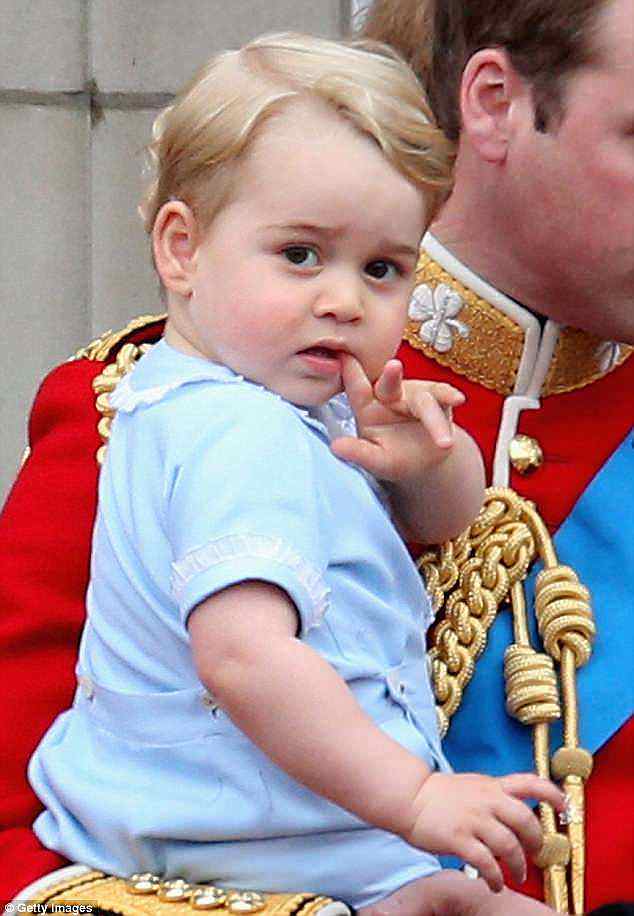 His father’s romper: George wore one of William’s outfits for Trooping the Colour in 2015 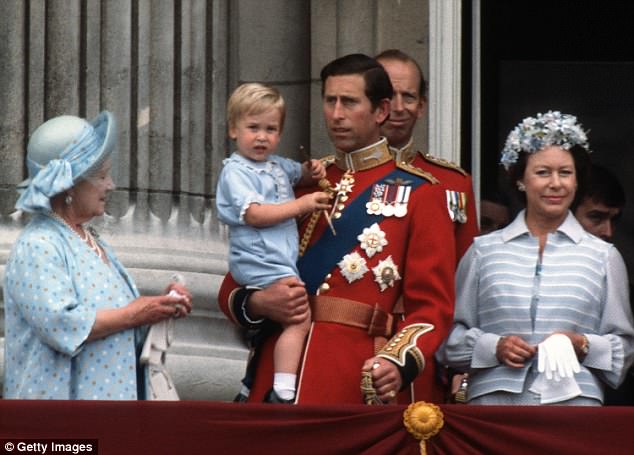 Little prince: William wore the same powder blue suit at the Trooping the Colour in 1984