The phone records of the key players on the day hotel quarantine was announced have become controversial because of a vacuum of evidence about who decided to use private guards as the hotel's security frontline.

Though the inquiry has completed its hearings, no one in government, police or emergency management has taken responsibility for the decision.

"This decision ended up employing thousands of people and costing tens of millions of dollars,” Counsel assisting the inquiry, Rachel Ellyard, said. "We ought to be able to say who is accountable for that decision."

We recreated a timeline of what Mr Eccles and those he communicated with said and when. 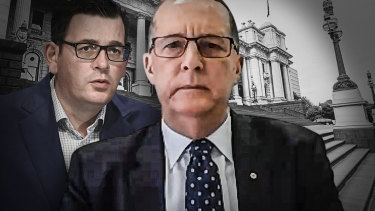 The secretary of the Premier’s department, Chris Eccles, resigned on Monday.Credit:The Age

1.17pm Eccles phones Ashton and speaks with him for just over two minutes (revealed today after Eccles produced his phone records).

1.19pm Text from unnamed member of the Premier's private office to deputy secretary Tim Ada, from the Department of Premier and Cabinet. "We will also need something on food and security for people in hotels, in addition to transport…Premier will stand up at 3pm so any clarity on whether we can go from tonight before then would be great."

1.22pm Ashton texts AFP Commissioner Reece Kershaw: "Mate my advise [sic] is that ADF will do passenger transfer and private security will be used."

1.32pm Ashton to Kershaw: "I think that’s the deal set up by our DPC [Department of Premier and Cabinet]. I understand NSW will be a different arrangement. I spoke to Mick F [NSW Police Commissioner, Mick Fuller]."

Eccles first statement to the inquiry in response to whether he had been involved in any communication with Victoria Police about hotel quarantine: "No, I do not recall any such communications."

Eccles said he did not have a copy of Ashton's text on his phone and "I do not now recall what, if anything, I did in response to that text message".

"No decision was made by me nor, as far as I am aware, any other person within DPC [the Department of Premier and Cabinet], to engage private security for use in the hotel quarantine program.

"Accordingly, while I do not recall if I called Mr Ashton after receipt of his text message…If I had done so I would not have (and would not have been able to) convey any decision about the use of private security as no such decision had been made by me or anyone to whom I had spoken."

On his text about a "deal set up by our DPC": "That's the level of knowledge I obviously had at that point. I don't remember where I got that or who I got that from."

Asked if he would hand over his phone records in his daily press conference, Premier Daniel Andrews said: “If a request were made, then of course."

Eccles resigns. In his statement, he said: "Following a request by the Board of Inquiry on Saturday 10 October 2020, I requested detailed telephone records from my telecommunications carrier. These records show I called Mr Ashton at 1:17pm and that I spoke with him for just over two minutes."