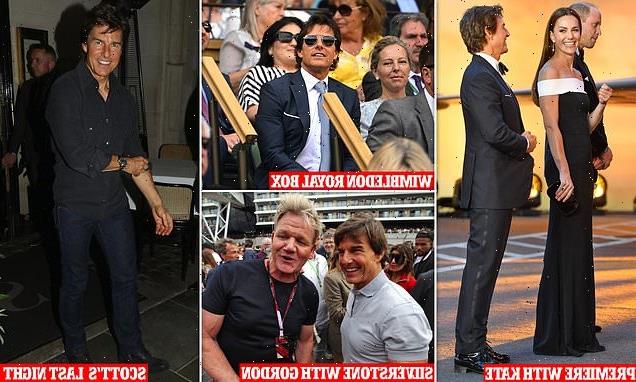 Tom Cruise’s Great British Summer! How Top Gun star has been living it up with royal premieres, lavish meals and trips to Wimbledon and Silverstone since landing in the UK in May

While most of us are looking forward to escaping the UK for a summer holiday, Hollywood megastar Tom Cruise has been busy putting down temporary roots and becoming a veritable man about town.

The actor, 60, has spent the last two months gallivanting across the country, bagging tickets to Silverstone, Adele and even the Royal Box at Wimbledon.

The fun continued last night with dinner at Scott’s, a celeb-approved seafood restaurant nestled in the heart of London’s Mayfair.

The actor, 60, was first spotted back in May when he caused a sensation at the Royal Windsor Horse Show and delivered a speech at the Queen’s Platinum Jubilee celebrations.

Days later came his outing with the Duke and Duchess of Cambridge at the Top Gun: Maverick premiere at Leicester Square. 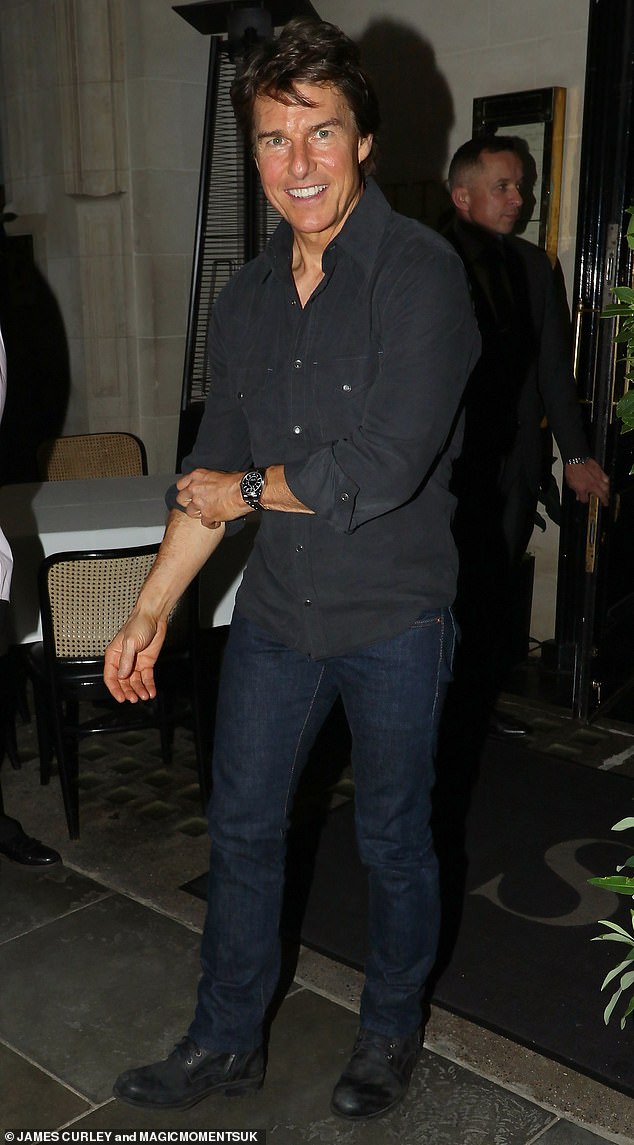 Following a brief stint overseas to promote the film in South Korea, Cruise returned to London in late June and made up for lost time by attending three concerts – The Rolling Stones, Eagles and Adele – in less than a week.

In the last two weeks alone he has clocked an outing to the British Grand Prix at Silverstone, where he rubbed shoulders with Gordon Ramsay, two Wimbledon appearances (including one in the Royal Box) and a string of nights out at some of the capital’s hottest venues.

He even squeezed in a birthday dinner with A-list friends Serena Williams and Alexis Ohanian. 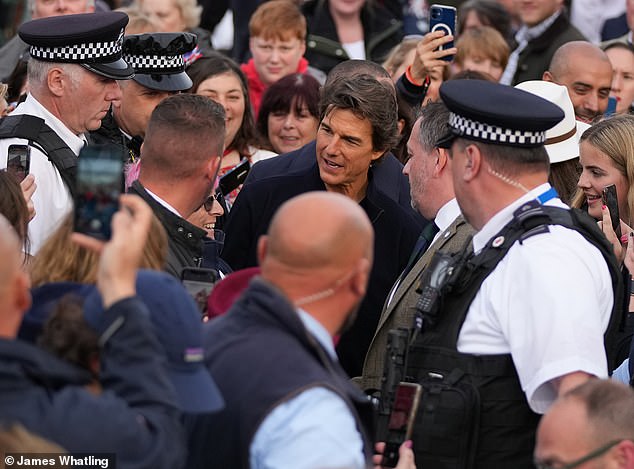 Causing a stir: Tom Cruise was mobbed by fans when he made a surprise appearance on day four at the Royal Windsor Horse Show. He smiled and waved as he made his way through the crowds, choosing to stroll through Windsor rather than take a car. The Queen, Prince Edward and Sophie Wessex also attended the event, which is a highlight in the royal calendar 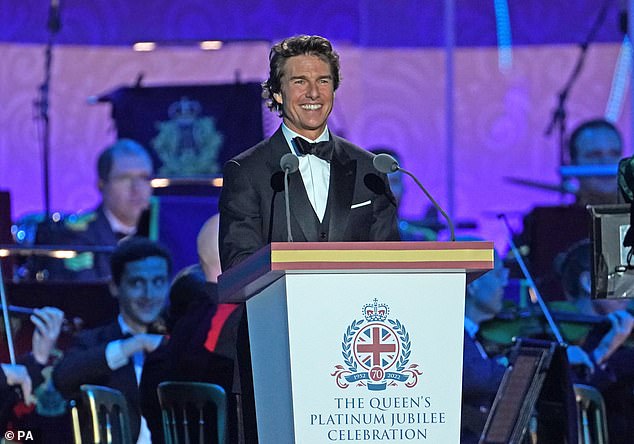 Dividing opinion: During A Gallop Through History, which kicked off the Queen’s Platinum Jubilee celebrations, Cruise made a 55-second appearance to introduce the King’s Troop Royal Horse Artillery as ‘one of the most enthralling, thrilling, heart-in-mouth displays’ he’d ever seen. Afterwards, he joined hosts Phillip Schofield and Julie Etchingham for an interview. The move raised eyebrows after he used the time on screen to promote his film Top Gun: Maverick

19 MAY: TOP GUN: MAVERICK PREMIERE WITH WILLIAM AND KATE 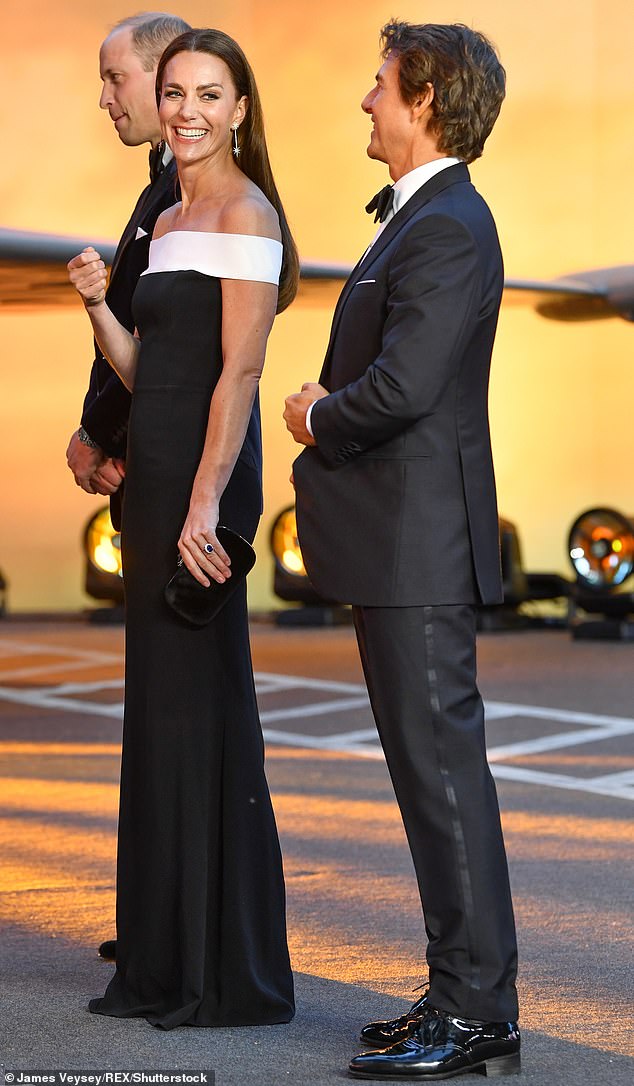 Red carpet moment: British royalty met Hollywood royalty when the Duke and Duchess of Cambridge joined Tom Cruise at the premiere of Top Gun: Maverick at Leicester Square. Cruise was hailed a ‘gentleman’ after he held out his hand to help the Duchess up a set of steps 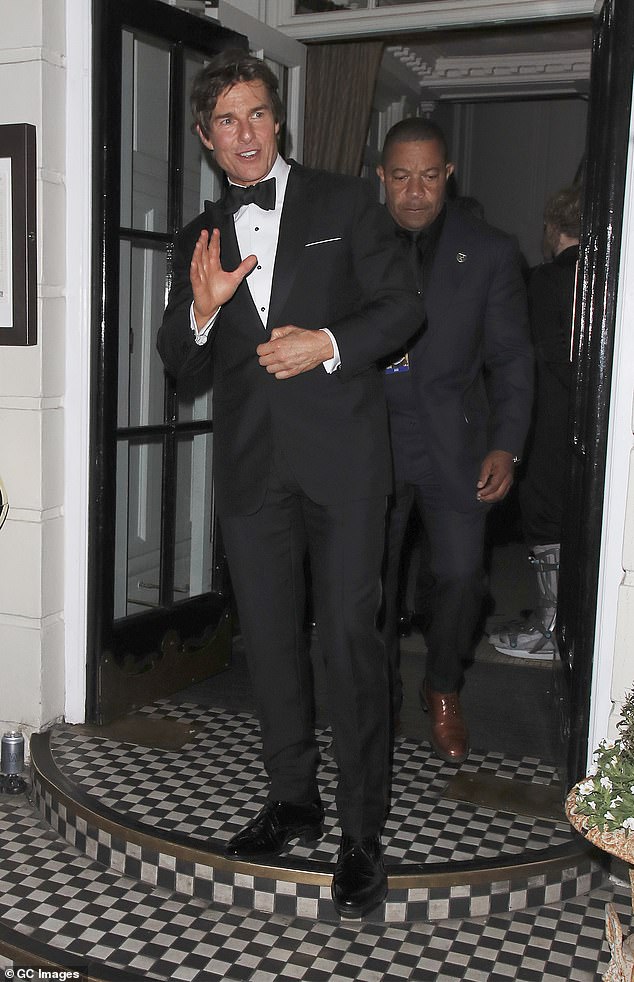 Keeping the party going! Following the premiere in Leicester Square, Tom Cruise headed down the road to Kettner’s restaurant in Soho for the after-party. Dapper in black tie, the actor waved to waiting fans and photographers as he made his way home at the end of the night 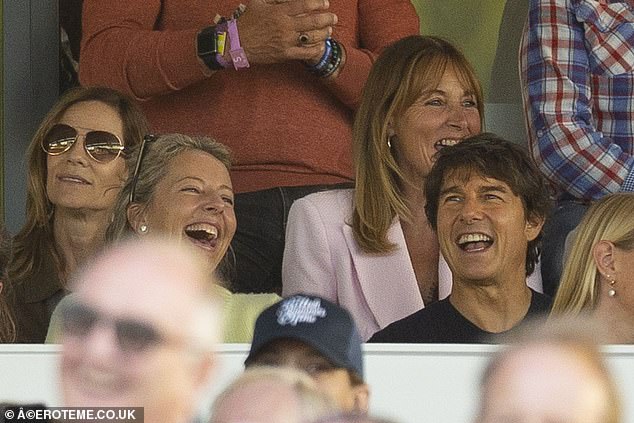 Rock on! The following night Tom Cruise returned to Hyde Park to watch legendary American rock band Eagles. The Hollywood actor was pictured ‘getting along like a house on fire’ with former England footballer Glenn Hoddle, 64, and Stereophonics leader singer Kelly Jones, 48, who praised the ‘charming’ A-lister, noting that he spoke to ‘as many people as possible’ 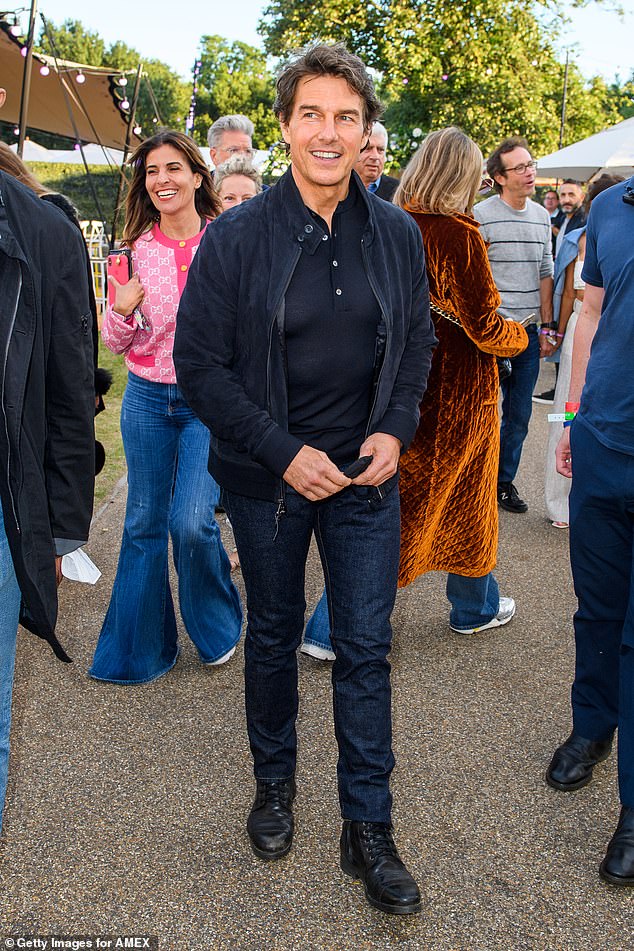 More music! Tom was joined by his agent Maha Dakhil for the Adele gig in Hyde Park a few nights later. The pair were all smiles as they entered the concert grounds before Tom stopped to speak to fans and pose for selfies. James Corden and Luke Evans also attended 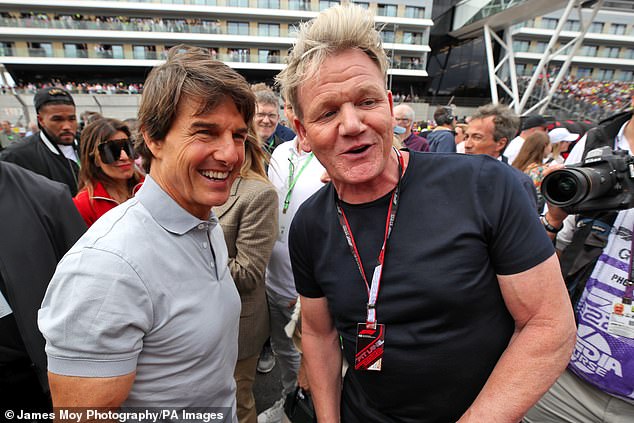 Birthday treat: Tom Cruise celebrated his 60th birthday at the British Grand Prix. The Top Gun star put his buff biceps front and center in a grey shirt as he made his way onto the grid at Silverstone, rubbing shoulders with famous racing fans like Gordon Ramsay 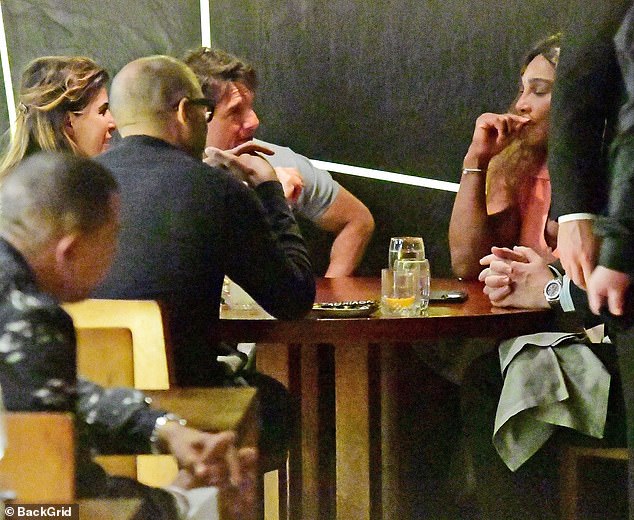 All-star group: Tom Cruise celebrated his birthday with Serena Williams and her husband Alexis Ohanian at London’s Novikov restaurant in the heart of Mayfair. The birthday boy was presented with a cake to mark the milestone and ‘drinks and good conversation flowed’ 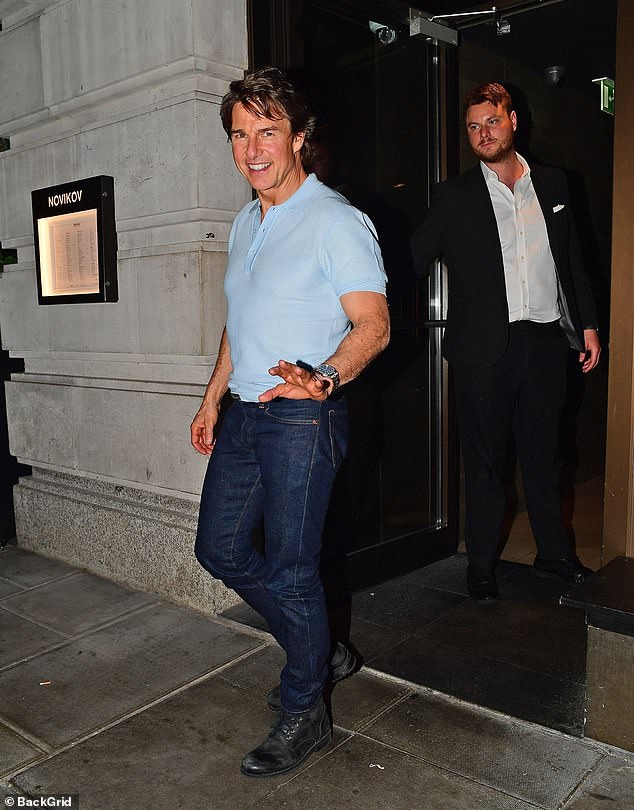 Making his entrance: Beaming Cruise, who was dressed in a blue polo shirt and denim jeans, waved to photographers as he left the restaurant at the end of the night 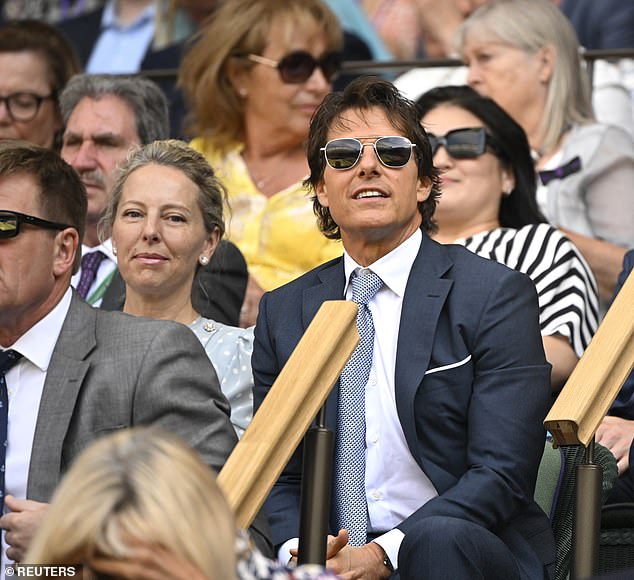 Ace tickets! Tennis fan Cruise is a frequent fixture at Wimbledon and often makes the journey to London to take in the action at SW19. This year, he was invited to watch the women’s singles final between Kazakhstan’s Elena Rybakina and Tunisia’s Ons Jabeur from the comfort of the Royal Box. The Duchess of Cambridge was seated just a few rows in front of the star 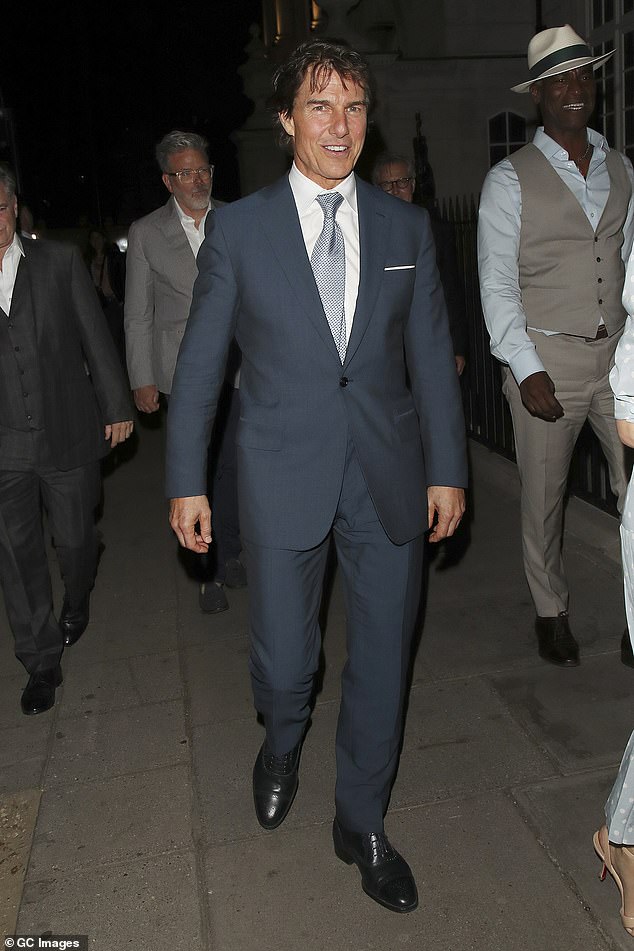 Trendy venue: Cruise went straight from Wimbledon to The Twenty Two, London’s newest private members’ club on Grosvenor Square. It has only been open for a few weeks but is already attracting the likes of Madonna, FKA Twigs, Idris Elba and Christian Louboutin 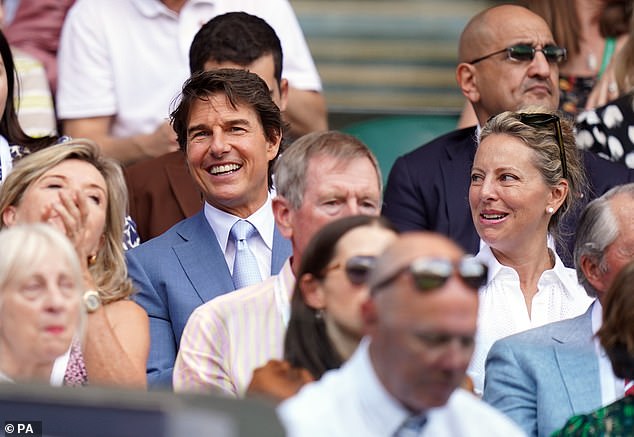 Take two! The following day it was back to the All England Club to watch the men’s singles final between Novak Djokovic and Nick Kyrgios. The star was spotted on the balcony looking over Centre Court ahead of the match and blew a kiss after he was spotted by an adoring fan 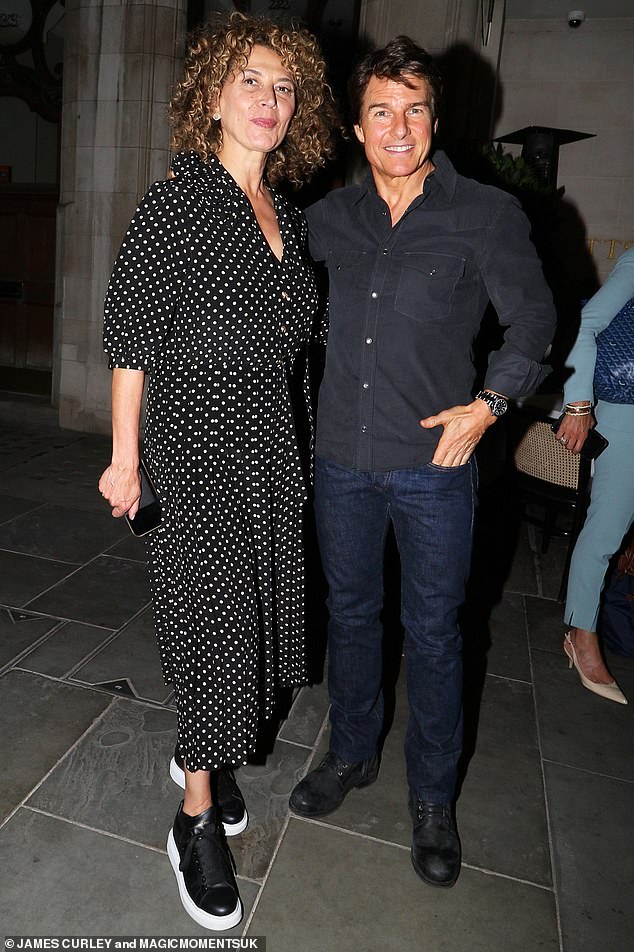 Party time: Cruise donned a black shirt and jeans for dinner at Scott’s, in London’s Mayfair with Dame Donna Langley, chair of Universal Pictures. It was likely an outing to celebrate Dame Donna being given her damehood earlier this week. The pair smiled for photos outside