It’s a crisp, sunny autumn morning in Los Angeles, and Toni Collette is sitting in a dark corner of the Sunset Tower Hotel cafe, fretting over her croaky voice and fussing over a pot of camomile tea with lemon. She’s caught a cold on her whirlwind trip from Sydney to attend the Toronto Film Festival premiere of her new film, Knives Out, and she’s determined to recover in time for tonight’s 25th anniversary screening of Muriel’s Wedding, hosted by the Academy of Motion Picture Arts and Sciences.

“It’s been a packed trip,” Toni acknowledges between sips. “I started in Sydney a week ago, flew to LA for a day to try and get over the jet lag and then I went to Toronto. After that, I flew to New York to do two days of press for [Netflix miniseries] Unbelievable, then had a day off to have a foot massage and do a bit of shopping before catching a cold and flying to LA. And now I’m here!”
Cold or no cold, the 47-year-old Sydney native can’t be restrained from talking passionately about both Knives Out and the P.J. Hogan-directed Muriel’s Wedding. 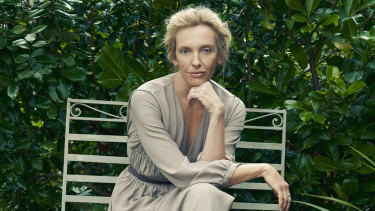 “I’m still so grateful for Muriel’s Wedding. It gave me a life I could never have dreamed of.”Credit:Matt Holyoak/Camera Press/australscope

“If I’d known 25 years ago that the Academy – the most well-known organisation celebrating film and film achievement in the world – was going to screen Muriel’s Wedding and have a party celebrating it, well, that’s just amazing to me,” she says. “People often think famous people have been that way forever, but no, the contrast is huge and I’m still so grateful for Muriel’s Wedding. It gave me a life I could never have dreamed of.”

At another anniversary screening in New York earlier this year, Toni says she watched the movie for the first time since its release and sobbed unabashedly from beginning to end. “It was incredibly overwhelming and joyous and I had the sense of something coming full circle,” she says, still sounding emotional.

The former NIDA student was virtually unknown outside of the Sydney theatre scene when she shot
to international fame at age 22 as an overweight, Abba-loving misfit who gets her revenge in the 1994 classic, also starring Rachel Griffiths.

It was the beginning of a career full of physical and psychological transformations that constantly surprised audiences, who found it hard to believe she was the same actress in films like: Velvet Goldmine (1998), The Sixth Sense (which earned her a 1999 Oscar nomination), About a Boy (2002) and Little Miss Sunshine (2006).

Then came a 2010 Golden Globe win for her role in the series United States of Tara playing no less than seven personalities trapped inside a mother with dissociative identity disorder and, jumping genres again, a starring role in the horror movie Hereditary, which became a surprise box-office hit last year.

“It’s been a long road, and there have been a lot of changes and a lot of opportunities,” Toni says of these wildly diverse projects. “But when you are young and unsure of yourself, you worry unnecessarily. I just wish I could go back to my younger self now and say, ‘Relax and enjoy it more!’ ”

Knives Out is a modern-day murder mystery written and directed by Rian Johnson (Star Wars: Episode VIII – The Last Jedi) and inspired by the all-star mystery films of the ’70s, such as Agatha Christie’s Death on the Nile and Murder on the Orient Express.

It begins with the discovery of the body of renowned crime novelist Harlan Thrombey (Christopher Plummer) the morning after his 85th birthday party.

The inquisitive and debonair Detective Benoit Blanc (Daniel Craig) is mysteriously enlisted to investigate, and he keeps his cards close to his chest as he sifts through a web of lies and red herrings while interrogating members of Harlan’s dysfunctional family and staff, played by a cast
that includes Jamie Lee Curtis, Don Johnson, Chris Evans and Australian Katherine Langford.

“I forgot I could go to a movie and just really get into it for the ride and the laughs and the whodunnit and because it was just really clever,” Toni says, beaming with pride. “I watched it myself in Toronto for the first time with 1200 people and it was so thrilling to hear them respond the
way they did during the movie and then give us a standing ovation.”

The laid-back actor chuckles as she talks more about her quintessentially Californian character, Joni Thrombey.

“Joni is a Californian lifestyle guru with her own line of products and she’s just full of contradictions, presenting herself as one thing and very much being another,” she says. 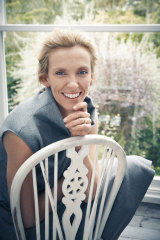 “That feeling of home is a feeling you can’t fabricate, and when I get home to Sydney it’s very strong.”Credit:Matt Holyoak/Camera Press/australscope

“It was fun to play someone who is pseudo-spiritual but puts more focus on presentation than being who she is. She’s also the daughter-in-law of Harlan Thrombey and has been hanging in there for a share of the family fortune ever since her own husband died 15 years earlier, so she’s a suspect too.”

Toni recalls receiving Rian Johnson’s script while filming Unbelievable, a drama based on the true story of two female police detectives who track down a serial rapist.

“Unbelievable was very dark subject matter,” she says, “so I was excited when I read Knives Out because it was original and funny and smart.

“Rian straight out offered it to me during our video call, and when I asked why he thought I should do it, he responded, ‘I think you’ll have a lot of fun.’ And I really did. I’ve loved Jamie Lee Curtis my entire life, so just working with her was already enough to make me happy. But then the rest of the cast really bonded too.”

Toni also has history with Daniel Craig, who makes a rare comedic appearance – one that’s more Inspector Clouseau than James Bond – in Knives Out. The pair co-starred in the 2000 box-office flop Hotel Splendide and Toni says they enjoyed every minute of their new scenes together.

“I remember last time it wasn’t great. I’d just come back from India and was very sensitive – it was an emotional roller coaster kind of moment in my life,” she says candidly. “I am just much more comfortable in myself now. I think I spent a lot of my career not vocalising my feelings because I thought everybody else knew better, and now I know that’s not the case.”

She smiles as she recalls moments on set when Daniel couldn’t stay in character while she was acting opposite him. “We’ve both grown up on and off set since the last time we met,” she adds, “and we’d just be giggling the whole time.”

During filming in a Tudor-style mansion outside Boston, Toni was joined by her husband, musician Dave Galafassi, and their two children, 11-year-old Sage and eight-year-old Arlo. Shortly after wrapping the film, the family permanently relocated back home to Sydney.

“I have lived in so many different places and we, as a family, are incredibly adaptable and able to set
up house anywhere when I’m working. But that feeling of home is a feeling you can’t fabricate, and when I get home to Sydney that feeling is very strong. It was really all about being with our tribe, the people we love, and enjoying Sydney.”

She cringes at the suggestion she can’t live a normal life in Sydney.

“I don’t notice if people recognise me,” she says. “I’m so into organising school uniforms, packing lunches, taking the kids to school, playing music and having chats in the car on the way there.”

She also baulks at the observation she seems to have achieved an ideal balance between family and career. “Of course, we try to make sure things shoot during the school holidays but sometimes life doesn’t really work out that way, so then it’s just one foot in front of the other,” she says. “I ask my friends how to balance things and they say, ‘You’re doing it.’ But I don’t feel like I’m doing it very well. In the end, all that matters is that everyone feels safe and loved and grounded.”

While Toni and her family are enjoying the perks of having family around, she’s also not opposed to pulling the kids out of school occasionally if her work threatens to separate them for long periods.

“I think we’ve got the wrong end of the stick when it comes to education,” she says. “There’s this creativity expert, Sir Ken Robinson, who did a TED Talk about the many ways to learn that are not in a classroom, and I agree. Luckily our kids are in a progressive school that understands that.

“Look at me. I’m uneducated and I’ve had the best education with my job, so hopefully my kids will also get to have lots of cultural experiences doing different things in different countries, and that’s a huge gift for all of us.”

As she prepares to head out and enjoy her day in LA, she mentions how much she’s looking forward
to getting home for an ocean swim. “Everyone raves about the ocean at Malibu and all those places, but they don’t understand that the Australian beaches are really incredible,” she says. “I think being immersed in something bigger than you just does something to your mind and it’s really good for me.”

It seems the girl from Porpoise Spit never really left the beach after all.

Knives Out opens in cinemas on November 28.

This article appears in Sunday Life magazine within the Sun-Herald and the Sunday Age on sale November 17.