You’re daydreaming about that beach vacation (or less-dreamy out-of-town conference). Just as you’re picturing the welcome distraction, that tight feeling in your breasts tells you it’s time to nurse or pump.

Moms familiar with the stresses (and joys!) of living life lactating have probably heard about the recommendations from the American Academy of Pediatrics. They advocate exclusive breastfeeding the first six months of a baby’s life, but it’s hard work. Hopefully moms are able to create a routine at home and at work for everything to go smoothly: the gear, the schedule and the back-up plans.

But throw in a trip, and things get complicated. There isn’t much leeway when you’re in seat 12B with a screaming, hungry baby who needs to nurse, or when you’ve got to pump now to avoid getting the painful breast infection called mastitis. Women often have to prepare for travel as though it’s a wilderness trip, bringing nursing gear such as cushions and covers, breast pumps and coolers filled with cold or frozen milk.

Getting through the security line at an airport can be a hurdle. For mothers who pump, traveling with expressed breast milk isn’t supposed to be a hassle. The TSA has policies related to taking expressed milk through security: you just tell the TSA agent you’re carrying breast milk and they can do special screening to get it through. 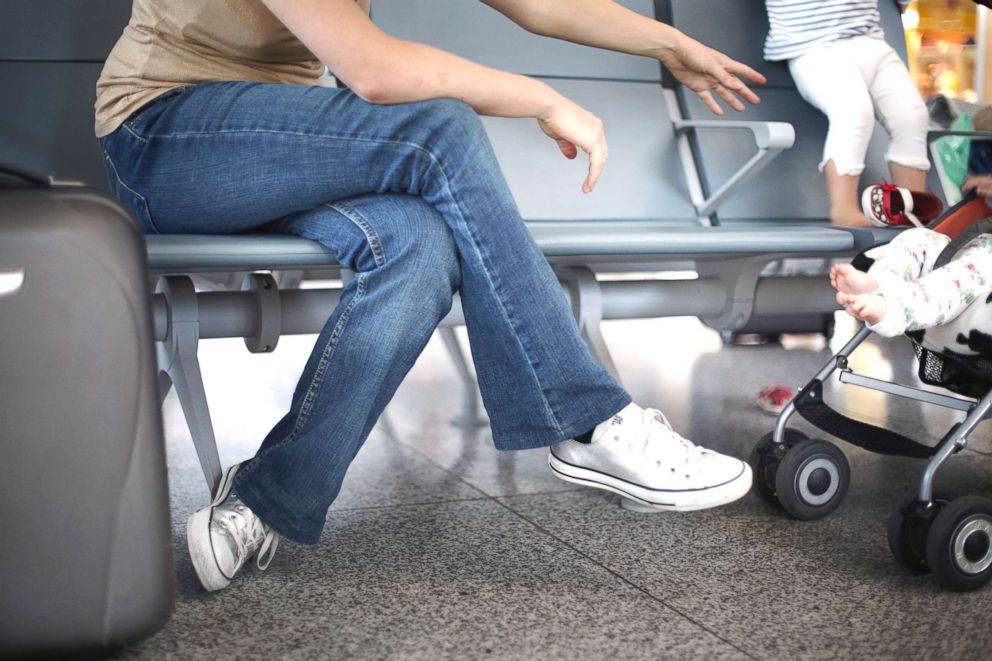 But some women face major delays as a result, since agents may test the breast pumps or even request to test a small quantity of the milk for safety.

Adriana Hudson, a mother of three and marketing consultant from Connecticut, told ABC News that it was hard to go through security during a work trip with both colleagues and pumped milk. “I had to place my breast milk in a separate bin, and it was awfully uncomfortable for my co-workers to have to wait while the TSA scrutinized it,” she said.

Others have an easier time, but it can vary from country to country. ABC News spoke to Dr. Jonelle Haigh, an obstetrician, gynecologist and mother of two from North Carolina. “In Mexico, I stepped up to security with my TSA policy in hand, prepared to say ‘leche materna’ and have my carry-on closely inspected,” she recounted. “But the TSA agent took one look inside my cooler with over 300 ounces of milk in storage bags and exclaimed, ‘Dios mio!’ (‘Oh my God!’). She then gave me two thumbs up and handed back my cooler, no questions asked. I smiled gratefully because not only is the struggle real, but it’s universal.”

What if you need to nurse or pump once you’re in the terminal? Depending on their level of comfort, some women choose to do it in the open or using a fabric nursing cover at their gate. Others who prefer more privacy have had to resort to an unsanitary airport bathroom in the past. But thanks to a new bill signed by President Trump, airports are finally getting on board — pun intended — with supporting lactating moms. The bill, FAA Reauthorization Act of 2018, includes language that requires airports to provide lactation rooms that are accessible to the public and that are not bathrooms.

Some working moms successfully petitioned Amtrak to provide lactation facilities, resulting in Mamava lactation pods at some train stations. You can find those lactation spaces at many airports now, too. There’s even an app you can download to find your nearest non-bathroom pumping or nursing space.

So, let’s get down to it: What do you need to do before you go to the airport as a lactating woman?


1. Print out the TSA rules on breast milk and have them ready in the security line just in case your TSA agent is unfamiliar with what is allowed.

2. Look up the lactation facilities at the airport ahead of time if you plan to use them.

3. Review the specific airline rules on diaper bags and breast pump bags (after all, you won’t be checking them as luggage).

4. If you plan to nurse or pump in the open, bring whatever supplies are helpful — such as a nursing cover, pillow, cleaning supplies and sealable bags for pump parts.

5. Traveling with pumped/frozen milk? Bring a cooler with enough ice packs to get through the trip.

6. What if airport security makes you toss your ice packs (even though they shouldn’t)? Don’t stress. Ask a restaurant in the terminal or your flight attendant for bags of ice.

Nothing about parenting is easy, and breastfeeding and pumping are no exceptions. But having to travel shouldn’t cramp your parenting style. Plan ahead, be proud of doing something for the health of your baby and keep making that “liquid gold” for your little one.

Linda Drozdowicz, M.D., is a child and adolescent psychiatry fellow at Yale, a mom who has traveled with a nursing baby, and a member of the ABC News Medical Unit.