Getting to Cuba was a little tricky. I had to catch a plane to San Francisco, then a smaller plane to Mexico City, then an even smaller plane to Havana, flying on an obscure Central American airline where everyone applauded when the plane landed, including the cabin crew. 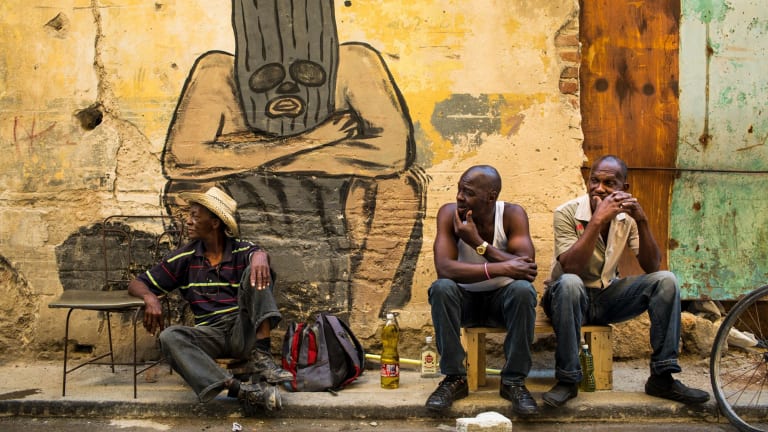 Cuba is an impossibly excellent place.

But it was worth that whole 23-hour nightmare of airport transfers and seat claustrophobia and inflight bean and rice meals and post-inflight meal flatulence and runway landing communal-prayer chanting, because Cuba was an impossibly excellent place.

Old Havana with its crumbling rickety buildings, all colour-washed-out and flaky, like a papier-mâché city that someone had left out in the rain. Classic, colourful 1950s Chevys zipping up and down streets, like gigantic Pez candies on wheels, in delicious carbon monoxide exhaust pipe flavours. Salsa-sexy Latino-bands playing in every corner bar, each musician talented enough to win armloads of Grammys, but here they had to work for peso tips from mojito-sloshed tourists, all trying to sing along to Guantanamera but only knowing the word “Guantanamera”.

Something was different about this place, something about the people: they were passionate, engaged, musical, chilled and absurdly good-looking – it was unnatural. And pretty soon I realised why everyone looked so relaxed and friendly and alive: the internet there is crap.

Cuba has very limited broadband and mobile phone access, which is what you’d expect from any poor, insular, developing, communist country, or regions of Australia with laggy NBN. So I had to acclimatise technologically: I couldn’t get out my phone and use online maps to find my way around – I had to use an actual map made of paper that fluttered in my face like a tent flap. There was no moving dot to locate my position, no marked route to tell me where to go, and I had no idea how to fold the map up at the end of the day – I couldn’t watch a YouTube map-folding tutorial by Japanese folding-guru Marie Kondo.

Another thing: I couldn’t access an online translator to communicate with the local Cubans. I had to make a huge effort and actually learn a few Spanish words like hola for hello and adios for goodbye and gracias for thank you – learn them AND memorise them, loco! And whenever I tried talking to someone in Spanish, sometimes they answered in Spanish, and I’d have to explain that I couldn’t speak Spanish, then they’d have to say the whole thing again in English, giving me a look like, “idiota gringo, why did you even bother in the first place?” It was muchos humiliatingo.

Oh, and also I had no way of checking the internet for historical or cultural facts: if I stumbled upon a 16th-century cathedral or a famous old plaza, I had to read tourist signs to get information, or tag along on the back of tour groups, hiding behind a family, pretending I was the weird uncle that they invited along and now they wished they hadn't.

Travelling with no internet was tough, it was brutal, for a day or two – and then … then … I began … to like it. Being disconnected forced me to reconnect: I started feeling like a real Cuban – passionate, relaxed, engaged, musical, chilled, and absurdly good-looking. From then on, I was liberated and phone-free: living for the moment, taking it all in, salsa-ing up and down the alleyways of Havana, singing April Sun In Cuba oh oh oh, over and over again. Unfortunately I only knew the chorus. Couldn’t check the lyrics. No access to Google. Didn’t care.

Danny Katz is a Fairfax columnist.