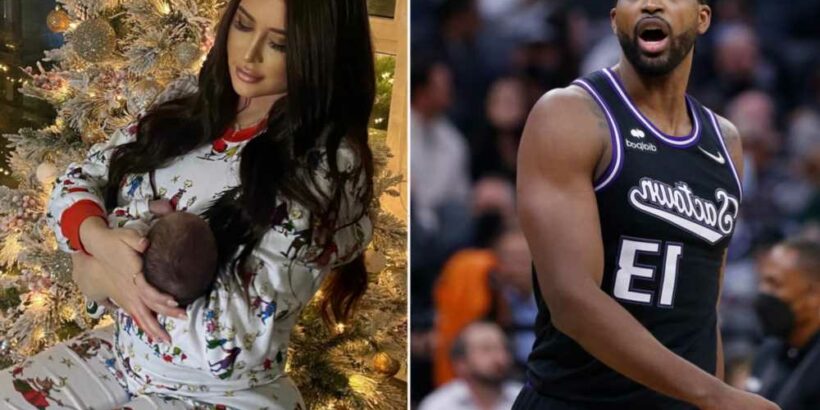 Tristan Thompson confirmed that he fathered a baby boy with Maralee Nichols via his Instagram Story Monday night, alongside a sincere apology to his ex — and other baby mama — Khloé Kardashian.

“Today, paternity test results reveal that I fathered a child with Maralee Nichols,” the NBA star, 30, wrote. “I take full responsibility for my actions. Now that paternity has been established I look forward to amicably raising our son.”

He continued, “I sincerely apologize to everyone I’ve hurt or disappointed throughout this ordeal both privately and publicly.”

In a second slide, Thompson acknowledged how his relationship with Nichols, 31, hurt Kardashian, 37, whom he was still dating when his newborn was conceived. 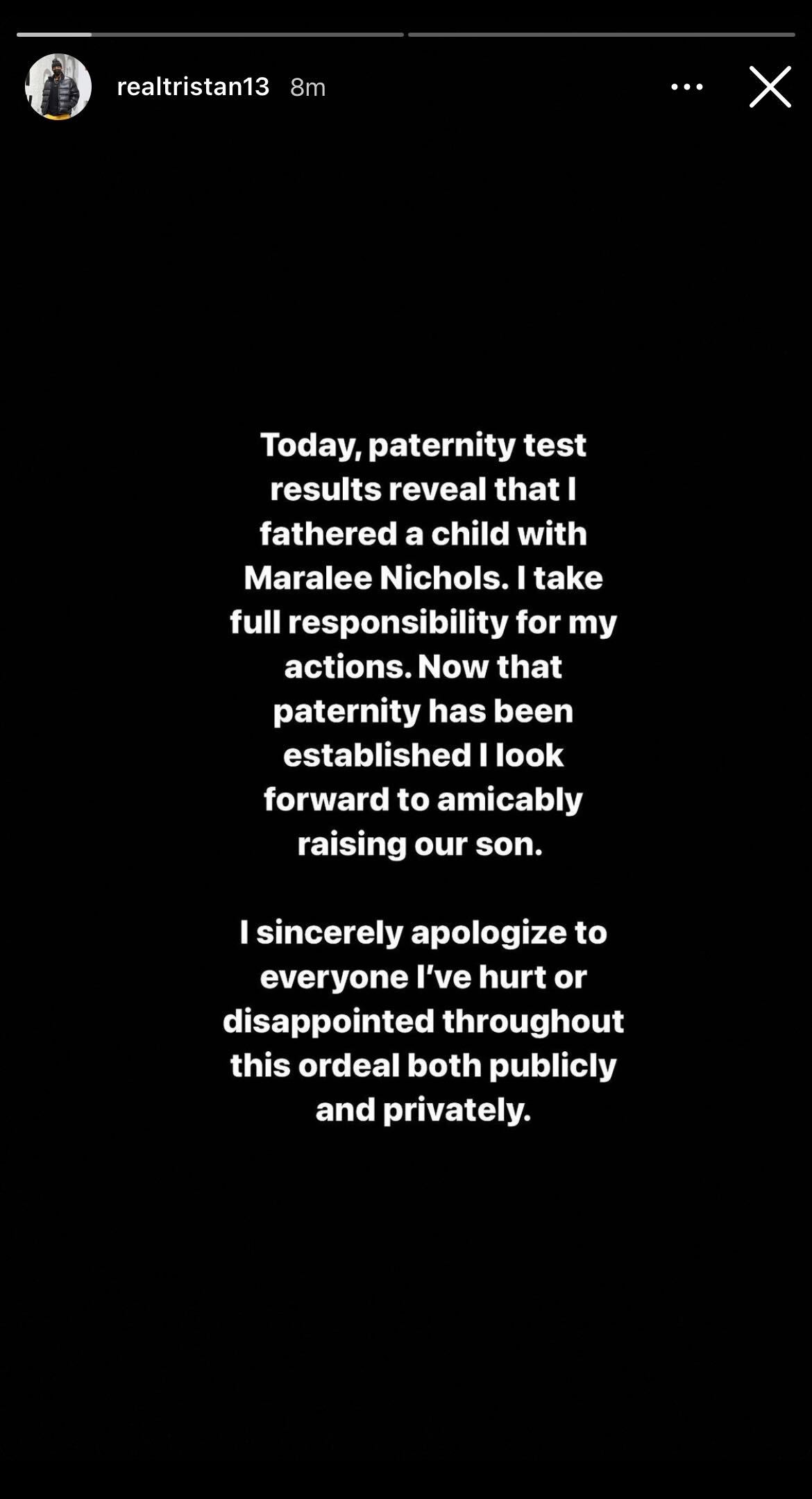 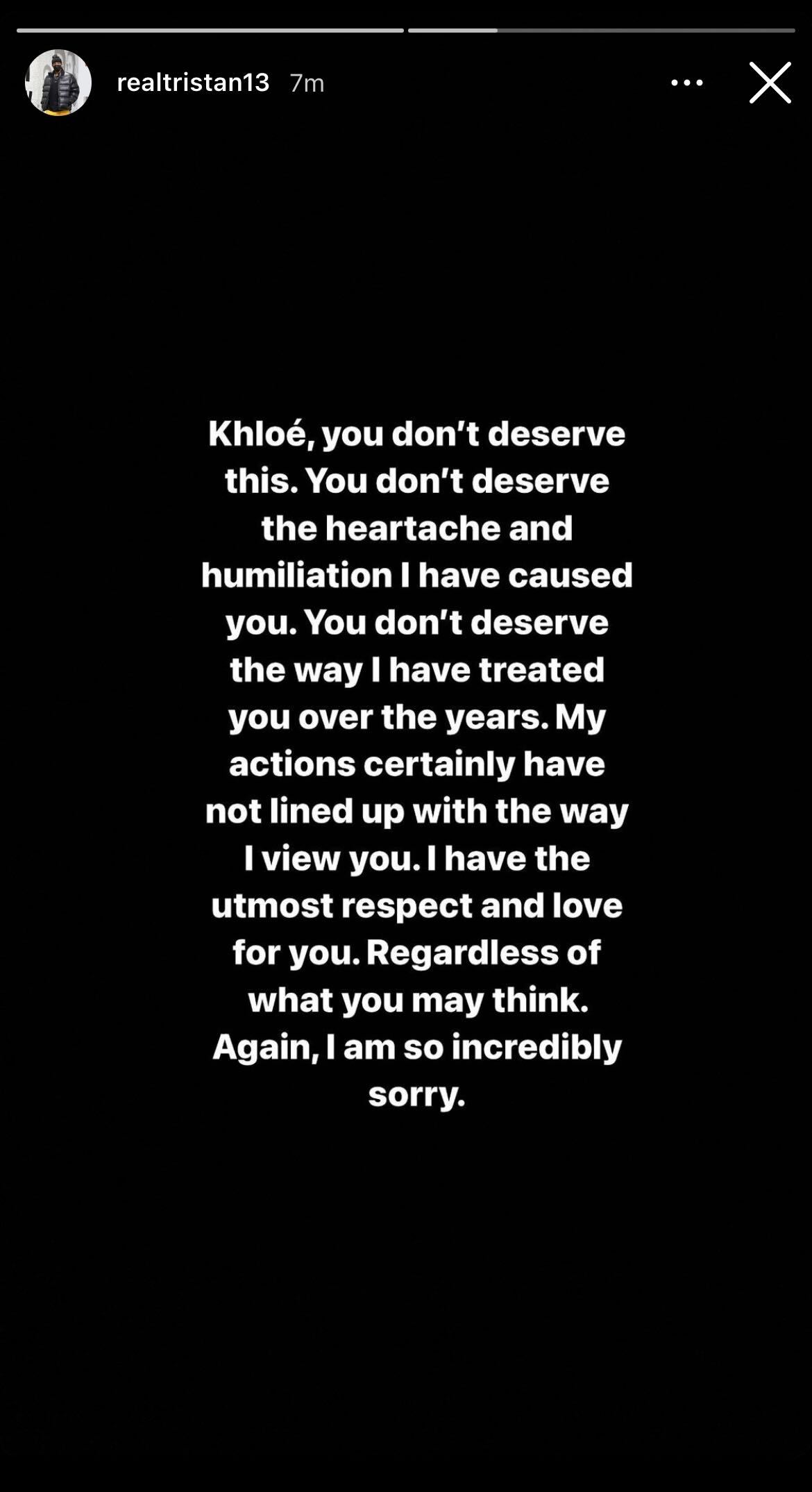 The athlete went on to say that his actions “certainly have not lined up” with his personal view of the “Keeping Up With the Kardashians” alum.

“I have the utmost respect and love for you. Regardless of what you may think,” he added. “Again, I am so incredibly sorry.”

Thompson’s admission comes after a headline-making legal battle with Nichols.

As Page Six previously reported, Nichols claimed in a paternity lawsuit that she and Thompson had sex over his 30th birthday weekend in March, which resulted in a pregnancy. Thompson admitted to having sexual intercourse with Nichols but denied being the father of her infant, whom she welcomed on Dec. 1.

Thompson had filed his own lawsuit against Nichols in Texas in response to her paternity suit against him in California, though it was dismissed last month.

The fitness model opened up about her tryst with Thompson earlier this month when sharing the first photo of her baby with People.

“Instead of focusing on any negativity, I am choosing to embrace being a mother and doing the best I can for my son,” the Los Angeles resident said in a statement. “I do not want any further media attention, nor do I want a romantic relationship with Tristan.”

She continued, “My goal is to raise our son in a safe, healthy, loving and private environment.”

Thompson had repeatedly demanded Nichols’ baby undergo a DNA test to prove he’s the father, but she stalled until recently.

Though Nichols has claimed that she and Thompson had a five-month affair, Thompson has maintained in legal filings that the two only had intercourse once.

“[Nichols] constantly used the term ‘hook up’ to describe our relationship which was the reality. I am certain that if the child is deemed to be my child that the only date of conception was March 13, 2021, because it was my birthday.”

Page Six exclusively revealed in June that Kardashian called it quits with Thompson for good over allegations he had slept with model Sydney Chase. (His dalliance with Nichols was then unknown.)

Thompson previously cheated on Kardashian in 2018 while she was pregnant with their now-3-year-old daughter, True, and again in 2019 with Kylie Jenner’s then-BFF, Jordyn Woods.

In addition to his children with Nichols and Kardashian, the Sacramento Kings player is also dad to son Prince, 5, whom he shares with ex Jordan Craig.